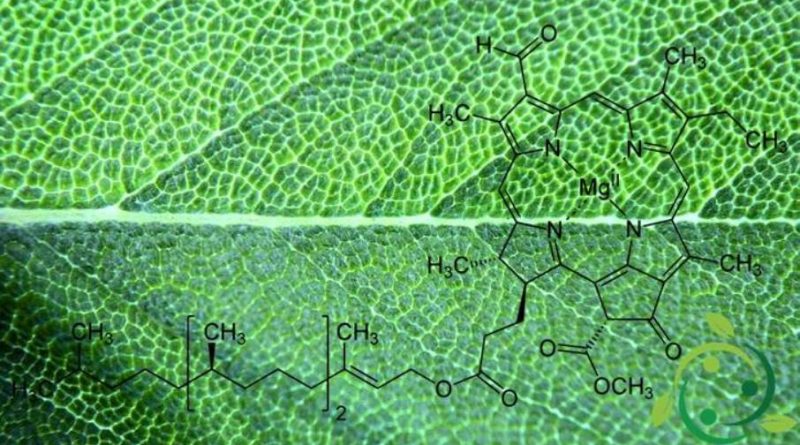 Chlorophyll is a photosynthetic pigment present in the chloroplasts of plant cells that allows photosynthesis thanks to the absorption of radiant energy. The term chlorophyll comes from the Greek χλωρός, chloros, green and φύλλον, phyllon, leaf.The pigment was first isolated by Joseph Bienaimé Caventou in 1817, and its structure was decoded by Hans Fischer in 1940; in 1978, when the stereochemistry of chlorophyll was known, Robert Burns Woodward published a complete synthesis of the molecule as it is known today. Chlorophyll is found in the chloroplasts of plant cells, or in prokaryotic organisms that carry out chlorophyll photosynthesis. In eukaryotes there are two different types of chlorophyll: – chlorophyll A, which mainly absorbs light in the blue-violet and red wavelength, – chlorophyll B, which mainly absorbs light in the blue and orange wavelength. Chlorophyll has a structure characterized by a molecule with a porphyrin heterocycle group, at the center of which an Mg ion is coordinated. The green color of the leaves is an optical effect due to the fact that the wavelengths of green are the least absorbed by plants. Chlorophyll is a chlorine produced through the same metabolic process that leads to the porphyrins to which it is structurally similar. The chlorophyll molecule has a ring structure, at the center of which is a magnesium atom. The magnesium atom performs the function of maintaining the rigid structure to prevent the incident solar energy from dispersing in the form of heat before it can be used for the photosynthetic process.

Connected with this ring is a water repellent chain that plays the role to anchor the chlorophyll molecule to the tyloid membranes. Chlorophyll is the cardinal molecule on which the Life of the planet is based; it is in fact the fundamental molecule for photosynthesis that allows plants to obtain energy directly from light. Chlorophyll molecules are structurally surrounded by protein complexes, called photo systems, which are enclosed in the thylacoids of the chloroplasts. In these complexes chlorophyll has two main functions, which is largely absorbing light and transferring energy to a specific pair of chlorophyll in the reaction center of the photosystem. The photosystems are of two types: the photosystem I or P700 and the photosystem II or P680. The numbers “700” and “680” indicate the wavelength in nanometers in which the two different primary acceptors have their absorption peak. The different photosystems have distinct identity, function and spectral properties determined by their characteristics and structure. surrounding protein. The function of the chlorophyll reaction center is to use the absorbed energy, transferred from the other chlorophyll into the photo system, to cause a separation of charges, a specific redox reaction in which the chlorophyll gives an electron to a series of molecular intermediaries on the so-called electron transport chain.Thus the chlorophyll of the loaded reaction center (P680 +) is subsequently reduced again to the equilibrium state acquires an electron. In the photosystem II the electron that reduces the P680 + comes finally from the oxidation of the water in O2 and 4H + by the evolving oxygen complex. It is thanks to this biochemical reaction that the photosynthetic organisms produce gaseous oxygen which then goes to make up almost everything the oxygen present in the terrestrial atmosphere. The Photosystem I works in series with the photosystem II so the P700 + of the photosystem I is normally produced by the photosystem II through intermediaries present in the thylakoid membrane. The electron transfer reactions in the tyloacoid membrane are however quite complex and the source of the electrons used to reduce the P700 + may vary. The flow of electrons generated by the chlorophyll reaction is used to transport the H + ions through the thylakoid membrane creating a energy potential used to produce chemical energy from ATP. Those electrons ultimately reduce NADP + into NADPH, a universal reducer that is used to reduce CO2 in sugars and other biosynthetic reductions. In addition to chlorophyll there are other pigments, called accessories, that intervene in these complex processes to optimize energy transformation. solar (light) in chemical energy.