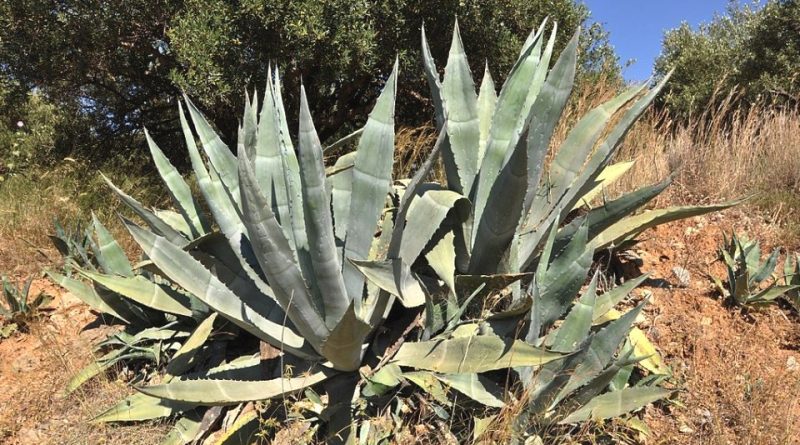 Systematics –
From the systematic point of view it belongs to the Domain Eukaryota, Kingdom Plantae, Division Magnoliophyta, Class Liliopsida, Order Liliales, Family Agavaceae and then to the Gender Agave and the A. American species.

Etymology –
The term Agave derives from the Greek ἀγαυός agauόs admirable, glorious, illustrious, noble: for the spectacular aspect of the agave in bloom. In Greek mythology, Agave (in Greek Ἀγαυή Agayé), daughter of Cadmus king of Thebes and his wife Armonia, was wife of Echione, from whom he had a daughter, Epirus, and a son, Penteus, killed by herself, invaded by fury of the Dionysian ecstasy. The specific American epithet is linked to its origin from the American continent.

Geographical Distribution and Habitat –
The American agave is a plant native to an area between the Caribbean islands and the northern part of Central America corresponding to the present-day Mexico and spread over the centuries, in the Mediterranean area and in all regions with a temperate climate. 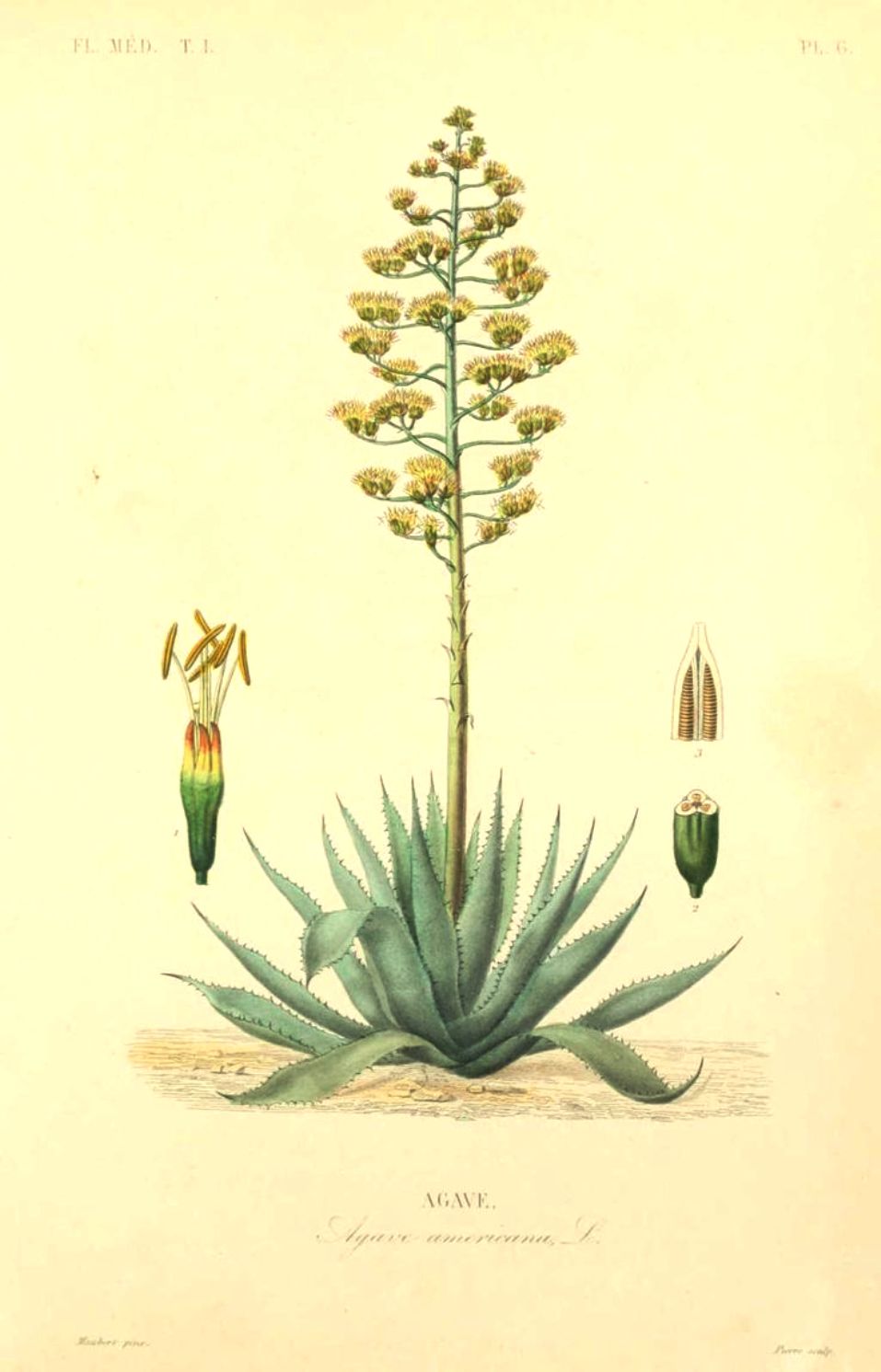 Cultivation –
The agave americana prefers warm and sunny places and does not tolerate temperatures below 5 ° C. The soil on which to grow it must be possibly acid, sandy, mixed with gravel or stony and well drained. As for the need for water, like all succulent plants, it manages to accumulate water reserves during the winter and spring. If grown in pot it should be irrigated in the period until the end of spring, only when the soil is dry, then suspend almost entirely in the summer. It is a rustic plant that grows in dry soils but, for its growth, takes advantage of more soils organic and with organic fertilizers.The multiplication of the plant is achieved by the division of the tufts as is done with Aloe and other succulent plants.The most simple and successful method is the separation of the shoots that are formed at the base of the mother plant . In spring, when the new plant has reached a length of about 10 – 15 cm, it separates from the head with a sharp knife, the wound is left to air dry for a few days and then planted in pot with the specific soil for Succulent plants and then grows as the adult plant. As for pruning, generally the agave should not be pruned, however, if grown in the apartment, the dried leaves are removed and those damaged by cold cutting them at the base of the substrate with a knife disinfected.

Uses and Traditions –
The Agave americana, besides being appreciated for its beauty as an ornamental plant, has many other uses. But it has been used by man for millennia, especially in Mesoamerican civilizations. The first exact details on the cultivation of agaves are due to John Gilton who traveled through Central America (1568-72). For the various and numerous uses the Jesuit Josè de Acosta called the agave “the tree of wonders” (el árbol de las wondillas). This agave, along with other species, has been used in regular feeding for at least 9,000 years. From the agaves we obtain a syrup, dense like honey, used as a sweetener. In some regions of Mexico, several species are used as fodder for cattle. From agaves, drinks such as aguamiel (fresh drink) and pulque, obtained from the fermentation of the former, have been obtained for several centuries. After the European occupation of Central America was introduced the process of distillation, unknown to the natives, which allowed to obtain today famous distillates such as mescal and tequila (which takes its name from the homonymous city where for the first time it was distilled). leaves are made from textile fibers that are used for ropes, nets, baskets, clothes, blankets, rugs, bags and other everyday objects. The agave fibers took the name of sisal from the city of Sisal in the Yucatán, from whose port the export took place; in this sense the most widely used species for the fibers at the time took the name of Agave sisalana. Over time the economic importance of agave fibers has diminished with the introduction of synthetic fibers. All the agaves are used in the formation of rows of plants used as fences of agricultural land. In Sicily the agave was found, in the delimitation of the royal trazzere.Altri uses are those of the use of the stems of the greater inflorescences like fishing rods or piles. The spines have been used as fishing hooks or sewing needles. The plant is used to heal burns.The bearing and the spectacular flowering of the agaves has favored the planting of various species in public and private gardens around the world as an ornamental plant, which has now become the major reason for spreading and knowledge to the vast public. The Indians made compresses with the pulp of some species for itching, wounds, sores or bruises while several agaves were used by the Tarahumara Indians as a poison for the fish; besides the juice of the. lechuguilla was used to poison arrowheads. The leaves of Agave have a very complex chemical composition that is the result of further study and study today. The leaves of different species, or their juice, were used until the 1990s in Mexico as soap. From the sapogenins present in various quantities in many species (especially from the sisalana), including the Agave americana, have been produced estrogen and cortisone.Inside the leaves of the American Agave contains substances that in contact with the skin can cause dermatitis.

Preparation Mode –
Besides all the historical uses, both food, therapeutic and industrial, the agave can also be used in the kitchen in some recipes. For example, remember the pulque soup, one of the most characteristic drinks of Mexican cuisine, obtained by cutting off the central leaves of the agave and collecting the juice that comes out every day for two months, leaving it to ferment, without distilling it . A clear drink with an almost viscous consistency, with an alcohol content slightly higher than that of beer. In addition, you can prepare basic recipes of various meats, such as rabbits, chickens, etc. made by wrapping the meat in the leaves of agave to flavor and protect it during the slow cooking on the embers. Also remember the Mexican flan made from agave honey, a natural sweetener obtained from the plant’s lymph and considered by many a viable alternative to sugar for the combination of the high fructose content and the low glycemic index.

Fonti
– Acta Plantarum – Flora of the Italian Regions.- Wikipedia, the free encyclopedia.- Treben M., 2000. Health from the Pharmacy of the Lord, Advice and experiences with medicinal herbs, Ennsthaler Editore- Pignatti S., 1982. Flora of Italy, Edagricole, Bologna.- Conti F., Abbate G., Alessandrini A., Blasi C. (ed.), 2005. An annotated checklist of the Italian vascular flora, Palombi Editore. Attention: The pharmaceutical applications and the alimurgical uses are indicated for informational purposes only, they do not represent in any way medical prescription; there is therefore no liability for their use for curative, aesthetic or food purposes.