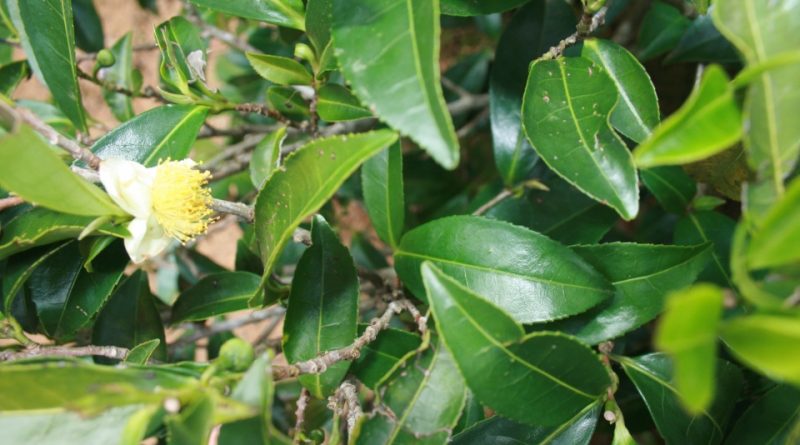 Systematic –
From the systematic point of view it belongs to the Eukaryota Domain, Kingdom Plantae, Magnoliophyta Division, Magnoliopsida Class, Order Ericales, Family Theaceae and therefore to the Genus Camellia and to the C. Coriensis species.

Etymology –
The term Camellia is dedicated to the Austrian missionary and botanist George Joseph Kamel called Camellus (1661-1706), who brought this plant to Europe from Japan. The specific epithet sinensis derives from Sínae China: that is of Chinese origin.

Geographic Distribution and Habitat –
The Camellia sinensis is of quite uncertain origin, but its autochthonousness in the West of China seems to have settled, in an area between the S.E. of Tibet, Yunnan, Guizhou, Hunan and Sichuan. Today this plant is now widely cultivated all over the world. One of the first tea camellias that came to Europe was from Linnaeus, which was given to it by Captain Eckbert in 1763 and cultivated it in the Botanical Garden of Uppsala. 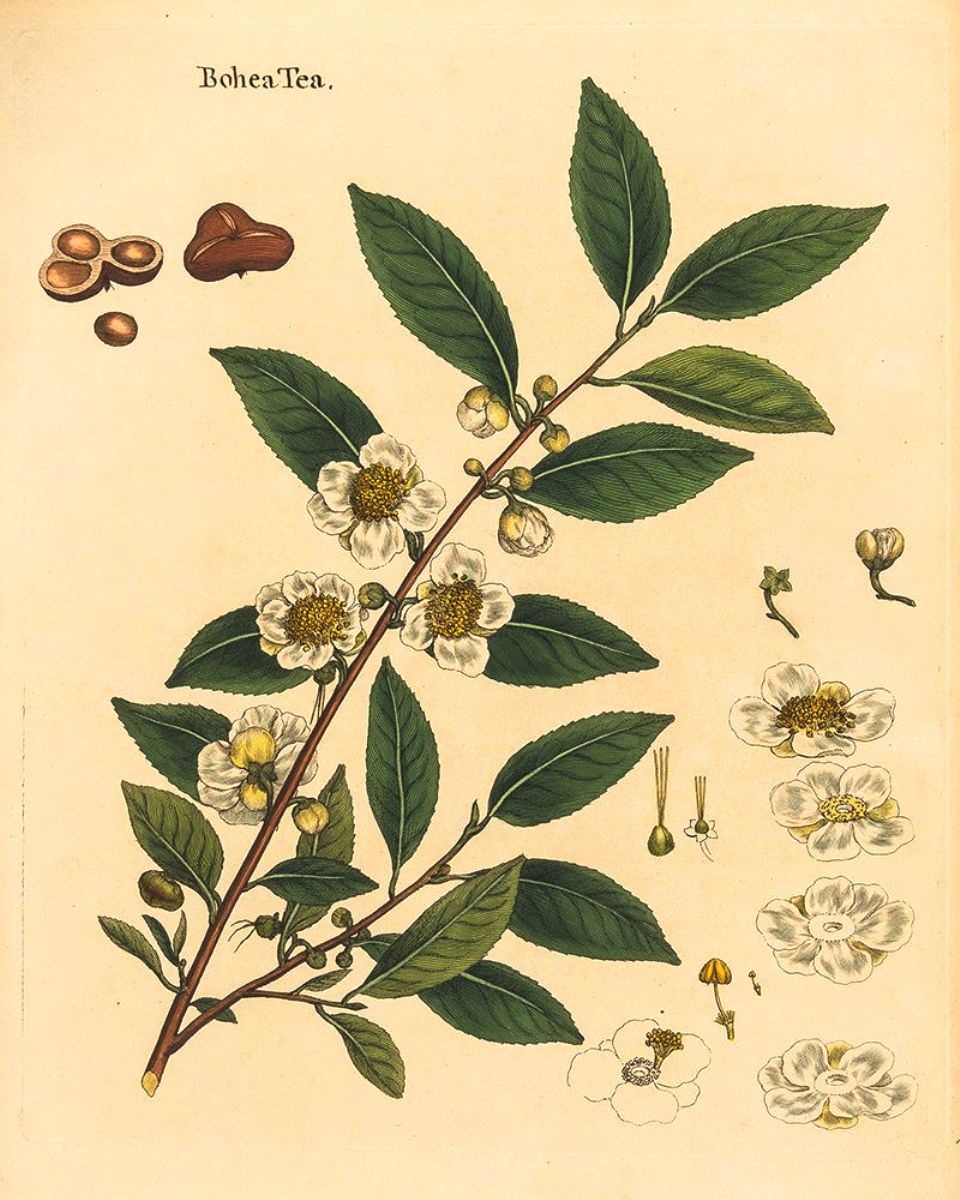 Description –
The Tea plant is an evergreen shrub that can grow to the size of a small tree (4-6 m), with expanded growth in aged specimens. The leaves are alternate of 4.5-9 x 2-3.5 cm, carried by a short petiole (3-8 mm), elliptical in shape, with obtuse apex; cuneate at the base, in a roughly toothed or sinuous-toothed margin and with curved and blackish teeth at the apex; they are tender and shiny green when young, and then become darker and more leathery, while the lower part is always clearer, pubescent.
The flowers are axillar, solitary or in groups of 2-3; also worn by short peduncles (8-12 mm), curved downwards. The chalice, supported by two precociously deciduous bracts, consists of 5-6 sepals, small (4-6 mm), hairy, unequal and often persistent even at fruiting.
The corolla is composed of 7-8 cream-white petals, each of which is obovate and concave inward, about 2×2.5 cm. The androceo consists of several stamens, gathered at the base (monadelfi), with whitish filament (15 mm) and anthers of an intense yellow-gold. The gynaeceum is represented by a tomentose ovary and surmounted by a short stylus (10 mm) with a three-phase stigma.
The anthesis, in Mediterranean climates, goes from late autumn or winter in particularly favored areas, to autumn or spring in the colder areas; the flowers give off a pleasant and delicate scent. The fruits are woody capsules tricocche, dehiscent at maturity, of 15-20 mm, initially green then reddish – brown when ripe, generally containing 1 or 2 oval seeds (1-1.5 x 0.8-1).

Cultivation –
Camellia sinensis is a plant cultivated mainly in tropical and subtropical areas, where rainfall can reach 2000 mm per year. It prefers acid and permeable soils, without stagnating water. However, it must be remembered that this plant is cultivated on all continents, even in regions far north of the areas mentioned above, such as in Cornwall and the state of Washington.
The ideal temperature is between 10 ° and 30 ° C and the crops can also be found at 2,500 m of altitude (it is at higher altitudes that often the finest teas are obtained). The productive life of Camellia sinensis generally begins 3-4 years after sowing, and lasts for a few decades, even if there are wild specimens that are more than a century old.
For details of the cultivation technique refer to the following sheet.

Uses and Traditions –
The cultivation and use of tea plants are lost in the mists of time. The first certain textual references to the consumption of tea in China date back to the third century. Among the major promoters of the Tea were the Buddhist monks who adopted it as a ritual and tonic drink. During the Tang era this drink spread throughout the country, thanks also to the contribution of the Tea Canon written by Lu Yu in 760. It was during the Song dynasty that the Chinese art of tea reached the maximum sophistication. It was the period in which it spread also in Japan, where in the XVI century a particular form of ritualized preparation was codified (so-called “Cha no yu”). In China, in the course of the Ming dynasty, the consumption of leaf tea was established and began to produce, in addition to green teas, also oxidized and partially oxidized teas.
Regarding its presence in Europe, the first reference is made in the accounts of the Venetian Giovan Battista Ramusio. Presumably, the Portuguese introduced the drink in Europe, but the first import of which was traced was from the Dutch East India Company. In Europe, tea first became popular in France and the Netherlands. Initially there were different positions on the part of the doctors on the new oriental drink: some considered it harmful to health, others like the Dutch doctor Cornelis Bontekoe promoted consumption as a remedy for all ills.
Tea soon became a popular drink in the United Kingdom. The English East India Company began to import it starting in 1669 and over the next century tea became the most important item in English traffic with the East.
The largest tea producer is China, followed by India. Japan also plays an important role in the production of certain qualities (Bancha, Matcha, Sencha and Gyokuro). In Europe, tea is grown in the Azores.
The seeds of Camellia sinensis can be squeezed to get a sweetish oil used in cooking and has cosmetic and medicinal use. The tea seed oil is cold-pressed from the seeds of Camellia oleifera or Camellia sinensis and, in Japan, also from the seeds of Camellia japonica, has a high smoke point (250 ° C) and is cooking oil in some southern provinces of China, such as Hunan. This seed oil resembles olive oil and grape seed oil for its excellent preservation properties and low saturated fat content. Monosaturated oleic acid can comprise up to 88% of fatty acids. It is rich in vitamin E (antioxidant) and other antioxidants and does not contain natural trans fats.
This seed oil, in addition to its use as a condiment, for sauces, fried foods and the production of margarine, is used to make soap, hair oil, lubricants, paint and an anti-rust oil as well as used in the synthesis of other high molecular weight compounds. Japanese Tea Seed Oil is used for the treatment of sumo wrestlers and tempura (batter for frying).
As for the production of tea, infused, depending on the type of treatment to which the leaves of Camellia sinensis are subjected, different products can be obtained by shape, color, aroma and flavor: treating the leaves with heat immediately after harvesting green tea is obtained; by drying them in the air, white tea is obtained; leaving the leaves completely oxidized, black tea is obtained; leaving them partially oxidized and then treating them with heat you get oolong tea. Furthermore, depending on the age of the leaf, different tea qualities are obtained, since, with aging, the chemical composition may undergo changes.
The tea contains caffeine, a stimulating alkaloid of the central nervous system, theanine, a psychoactive amino acid, catechin, an antioxidant found mainly in green tea and white tea, theobromine and theophylline, two stimulating alkaloids, and finally fluorides.
All types of tea originate from the processing of leaves, shoots and other parts of this plant and, as mentioned, only the processing methods differentiate the various types.

Preparation Mode –
For the preparation of tea, perhaps the most famous and widespread drink in the world, the leaves of the plant, treated and dried, are used to prepare the drink by infusion or decoction.
The taste, intensity and effects of the drink depend on the type of tea and the infusion methods (temperature and duration). A short infusion (about 2 minutes) extracts from the tea leaves especially caffeine and has stimulating properties. A longer infusion (3-5 minutes) also extracts tannic acid which disables caffeine because it combines with it, attenuating the stimulating effect. In addition, tannic acid makes tea taste bitter.