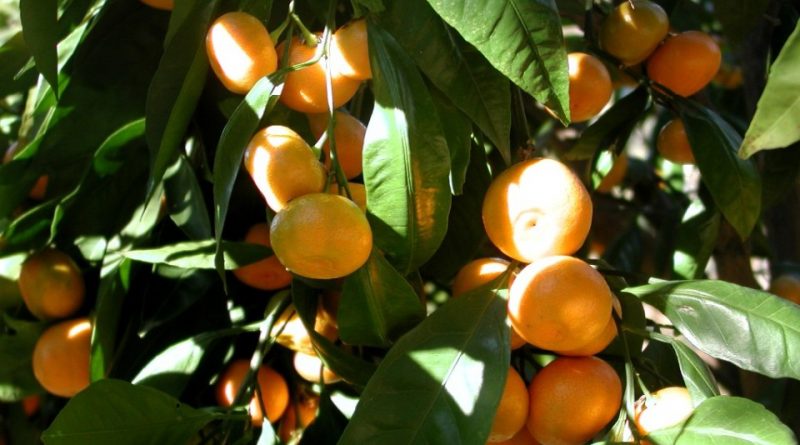 The mandarin (Citrus reticulata Blanco, 1837) is a fruit tree species of the Rutaceae family.

Systematic –
From the systematic point of view it belongs to the Domain Eukaryota, Kingdom Plantae, Class Magnoliopsida, Sottoclasse Rosidae, Order Sapindales, Family Rutaceae, Subfamily Aurantioideae, Tribe Citreae and then to the Genus Citrus and to the Species C. reticulata.

Etymology –
The term Citrus is the Latin name of the cedar and lemon, from the Greek Greek κέδρος kédros cedar and κίτρον kítron lemon. The specific reticulated epithet due to the fact that it presents a network, from reticulum, diminutive network.
The common mandarin term derives from tropical China, and is identical to the name given to the ancient imperial political officials (and their family of languages) as they were dressed in an orange cloak.

Geographic Distribution and Habitat –
Mandarin is one of the three original citrus fruits of the genus Citrus, together with cedar and pomelo, and is of origin of an Asia region equivalent to today’s China. The cultivation of the fruit arrived in Europe especially in Portugal and Spain, where it began to spread around the fifteenth century. 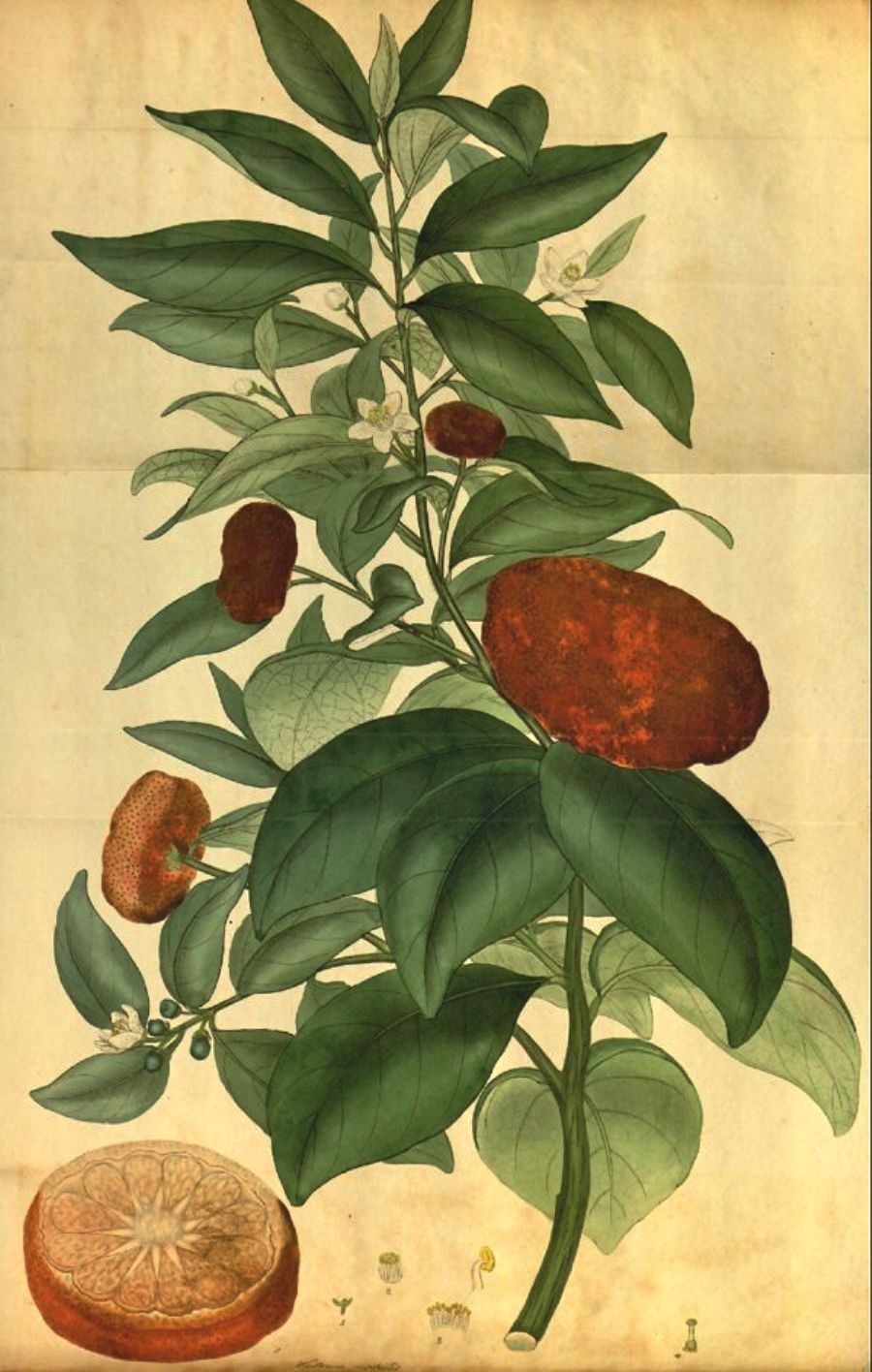 Description –
Citrus reticulata is a small tree or shrub that can reach a height of 2 – 4 meters. It has small and very fragrant leaves. The fruit, which is an esperidium, has an orange skin, thin and fragrant, with a very rarefied and granular albedo which allows an easy peeling of the fruit; this is of spheroid shape and somewhat flattened in the longitudinal direction, with light orange pulp, consisting of easily divisible segments, very juicy and sweet, within which there are numerous seeds immersed. The flowers (zagara) bloom in spring, are white, fragrant, and occur at the apex of the branches, single or in corymbs that can count 3-5 flowers.

Cultivation –
The mandarin is a plant that prefers sunny places and sheltered from the winds and loose soils, fertile, well drained and, preferably, not calcareous. The plant should be irrigated in the period from the end of the rains to the new rainy season. Like other citrus fruit, it takes advantage of organic fertilizations while it is very sensitive to nitrogenous fertilizations that cause a great vegetative growth but also a great susceptibility to the attacks of aphids or other insects, attracted by the greater tenderness of the tissues.
Like lemons and citrus fruits in general, the mandarin propagates by seed, by cutting, by air layering and by a gemstone grafting. Among the most used rootstocks we remember the bitter orange. To increase its resistance to cold, however, the best is the trifoliate orange (Poncirus trifoliata). For details of the cultivation technique refer to the following sheet.

Uses and Traditions –
The Citrus reticulata, as mentioned, is one of the three original citrus fruits of the genus Citrus, together with the cedar and the pomelo. The plant was introduced in Europe in the first half of the 19th century as an ornamental plant, precisely it arrived in Malta as a botanical curiosity, and later in Sicily where it acclimatized very well (Avana variety). For some botanists it is considered more ancient than oranges and lemons. What is certain is that alongside the well-known organoleptic properties – essential oils, vitamins, flavonoids – it has as many symbolic properties. To the point of becoming the name of a language and the emblem of an elite. The term “mandarin” derives, in fact, from the color of the golden orange dress of the wise imperial dignitaries of ancient China who interpreted the wishes of heaven and transmitted them to the emperor. The famous Mandarins were literati and poets that their refined education made depositaries of a wisdom superior to any technical knowledge.
It was the Portuguese who coined the word mandarim by vulgarizing the Sanskrit mantrim, which means minister and in turn derived from mantras. But in reality the original Chinese term was Guan and designated the dignitary responsible for the collection of large mandarins offered as a precious tribute to the emperor. But in addition to a caste of high-ranking officials, a celestial bureaucracy, the term went on to indicate the equally elite language of Northern China. As if there were, in short, a sort of elective affinity between the nobility of the office and that of the fruit, between the excellence of knowledge and that of taste. An analogy that has also become common sense here.
The mandarin is a fruit with a sweetly imperious aroma from which we derive the famous mandarin punch that was the comforting panacea of ​​post-war Italy, no less was the mandarinetto, a liqueur prepared with great wisdom by our ancestors.
The taste is very pleasant, thanks to the higher sugar content compared to other citrus fruits. The mandarin exerts a particular sedative action on the nervous system, since it contains more bromine than the orange, it can be useful consumed at dinner, in cases of insomnia. In pastry it is used for cakes, pies, jams and jellies, while the juice is used for the preparation of puddings, charlotte and mousse.
Among the different varieties of mandarin it is worth mentioning the “mandarino tardivo di Ciaculli” (which is a locality of Palermo where it is cultivated) called “marzuddu”, that is, with maturation in March. It is a product included among the Slow Food Arca del Gusto Presidii and the late term indicates that its production is delayed compared to that of other congenial citrus fruit. The fruit is an endemic variety and is not produced by grafts or genetic engineering operations. It has a strong aroma, a high sugar content and has a very thin skin. The production is limited to about 200 hectares belonging to small owners gathered in a consortium.
Mandarin, in all its varieties, is very good for health. Let’s see, therefore, its nutritional values ​​in detail for 100 grams of pulp: Water 81.4 g, Protein 0.9 g, Lipids 3 g, Cholesterol 0.0 mg, Carbohydrates 17.6 g, Soluble sugars 17.6 g , Dietary fiber 1.7 g, Soluble fiber 0.67 g, Insoluble fiber 1.03 g, Energy 72.0 kcal, Sodium 1.0 mg, Potassium 210.0 mg, Iron 0.3 mg, Calcium 32.0 mg, Phosphorus 19.0 mg, Thiamine 0.08 mg, Riboflavin 0.07 mg, Niacin 0.30 mg, Vitamin A 18.0 mg and Vitamin C 42.0 mg.
As we have seen from this list, mandarin is a fruit rich in water, mineral salts, simple sugars and vitamins. Moreover, thanks to its high energy intake it is particularly indicated in the diet of sportsmen. However, since it is rich in fructose, it should be consumed less than other fruits such as apples, pears or oranges. For this reason if you suffer from diabetes or obesity it is good to consume it sparingly. The high fiber content makes it suitable for those suffering from difficulties in digestion or constipation or meteorism because it regulates and improves functioning and intestinal traffic. Mandarin, as well as other citrus fruits, contains so much Vitamin C. Furthermore, mandarin also contains bromine which is a sedative for the nervous system that helps to relax and reconcile sleep. According to some studies carried out by the National Institute of Fruit Tree Science, the Mandarin has anti-cancer properties. The skin, which is generally thrown away, is rich in limonene, a substance that contains antioxidants that are very useful to fight cellular aging and keep us young.
For this reason the mandarin is used in the field of cosmetics. In fact, it has a purifying and draining effect on the skin.

Preparation Mode –
The mandarins are normally consumed as fresh fruit or processed in the production of jams, candied fruit, cakes, pies and jellies, while the juice is used for the preparation of puddings, charlotte and mousse. Mandarin is also used in liquor. From the peel the essential oil is extracted which is a slightly fluorescent gold-yellow liquid, which is mostly d-limonene which is often sophisticated with the oil obtained from the whole unripe fruit.