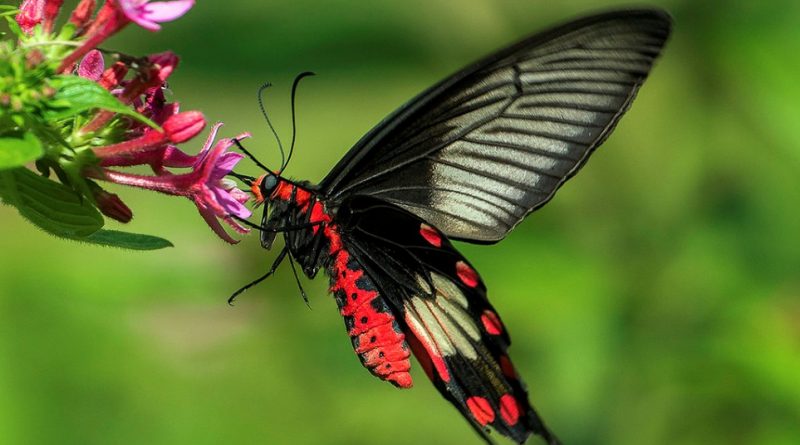 Geographic Distribution and Habitat –
The Pachliopta aristolochiae is widely present in Asia, including Afghanistan, Pakistan, India (including the Andaman Islands), Nepal, Sri Lanka, Myanmar, Thailand, Japan (only Southwestern Okinawa), Laos, Vietnam, Cambodia, Nicobar Islands, and East Malaysia, Brunei, the Philippines, Indonesia, Bangladesh and Taiwan. It is very common in almost all the plains of India and is not a threatened species. During and after the monsoon it is extremely abundant.

Morphology –
The Pachliopta aristolochiae is a showy butterfly that is characterized by the dorsal part of velvety black color.
I notice some pale and well marked strips on the discal area that do not reach the terminal margin, the latter is very velvety black; the stripes are clearly visible, alternating with darker stripes. In the specimens that live in drier climates these signs are very short. Beyond these strips, a series of subterminal spots are noted in the intermediate spaces, from one to seven bright red, sprayed with black scales, and other areas of white color in the intermediate part of the wings.
On the underside of the males, the color and the markings are similar, but the subterminal red spots on the back are much brighter. The antennas, the thorax and the abdomen are black; the head, the upper part of the prothorax and most of the thorax and the lower part of the abdomen are bright red together with the anal segment which is also vermilion red.
This species has a low sexual polymorphism and the females are similar to the males; they differ from this only for the relatively larger wings.
The eggs are round and reddish with thin black marks and are laid individually on top, in the lower part of the leaves or even on the shoots.
The caterpillar is a velvety-brown color and has a white band on a segment in the middle that resembles a belt or collar. This has numerous fleshy white bumps with a red tip on the body. He is rather clumsy and slow in his movements.
The pupa is brownish with various shades of brown and pink. It sticks to supports where it lives with its tail and is held at an angle by a strap. The distinctive feature of the pupa is the presence of large semicircular projections on the back of the abdomen, chest and head.

Attitude and biological cycle –
The Pachliopta aristolochiae is a butterfly, dovetail widely widespread in the south and southeast Asia and is the most common of India’s wide-tailed butterflies.
Its morphological characters (red body, the slow and characteristic flight, the brilliant coloring and the design of the wings) have the purpose to indicate to the predators that this butterfly is inedible, being well protected from the poisons that it has obtained from the plants of which it is nourished in the larval state. Among other things, it also emits a foul-smelling substance that further increases its unpleasant qualities.
The common rose, in the butterfly state, frequently visits flowers like Lantana, Cosmo, Zinnia, Jatropha and Clerodendron. The common rose is a butterfly that is very active in the morning before most of the butterflies and remains as such all day until sunset. You can see it flying both in the sun and in shady areas.
In the driest regions, around noon, the butterfly rests in thickets or shaded areas to avoid heat. After this phase of rest, he resumed his activity in the late afternoon.
In the evening, retreat to wooded areas in search of dry branches or twigs on which to lay. It prefers sites that are 3 to 5 meters above the ground, under the canopy of the trees with a good cover of leaves, where it often regroups in the company of other butterflies of its species.
The Pachliopta aristolochiae is an insect that flies high, slowly and often falls when it has to take the nectar of the flowers below. On such occasions it often lowers with the wings closed, and as it approaches the flower, the wings reopen to facilitate deceleration. In its flight, this butterfly stands mainly on the powerful beating of its front wings while the rear wings act as a balancing mechanism and steering. This flight technique makes an unusual flight appear to an observer, as it seems that this butterfly is flying only with the assistance of its front wings.
From the deposition of the eggs are born of the voracious caterpillars that will feed themselves abundantly before becoming impoverished. The female is often observed on plants of Aristolochiaceae while it is selecting those plants which are healthy and more vegetated to guarantee a sufficient quantity of food for its voracious caterpillars. The female lays the eggs, arranged individually at the top, in the lower part of the leaves and shoots.

Ecological role –
The larvae of the Pachliopta aristolochiae feed on climbing species of the genus Aristolochia, from which they take toxins, such as aristolochic acid, which accumulate in their bodies. This makes adults toxic to vertebrate predators like birds and reptiles. However, the brachonid wasps, which parasitize caterpillars, are not affected by toxins; This is because, most likely they evolved together with this butterfly.
The food plants that feed on the larvae are: Aristolochia bracteolata, Aristolochia indica, Aristolochia tagala, Aristolochiae griffithi and Thottea siliquosa.