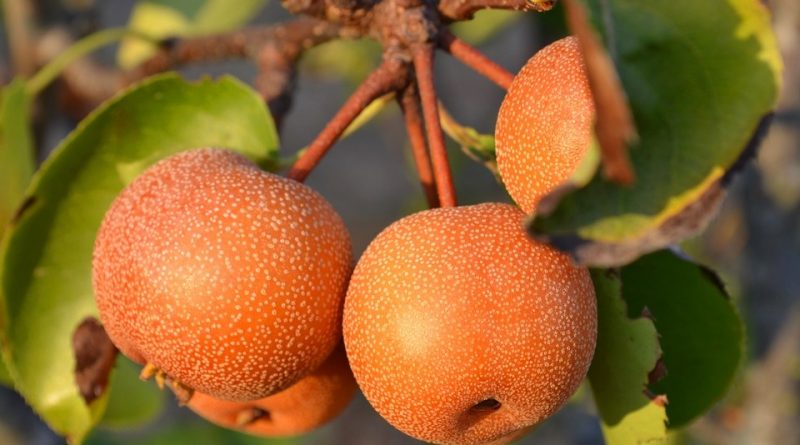 The Nashi or Japanese Pear (Pyrus pyrifolia (Burm.f.) Nakai, 1926) is a fruit tree species of the Rosaceae family.

Etymology –
The term Pyrus comes from the Greek πῦρ, πῠρός pyr, pyrós fire: for the conical shape of the fruit. The specific epithet of pyrifolia is a reinforcing term: which has the typical leaves of the genus. The term nashi, comes from the Japanese where it means pear.

Geographic Distribution and Habitat –
Nashi is a plant native to central China and subtropical temperate zones; It is also common in Japan, South Korea, the United States, New Zealand and Australia. It is a species that was already cultivated at least 3000 years ago in China. Later, in the nineteenth century, this plant was introduced to America by Chinese miners, who began to cultivate it along the rivers of the Sierra Nevada. At the end of the 20th century, its cultivation began in Europe. 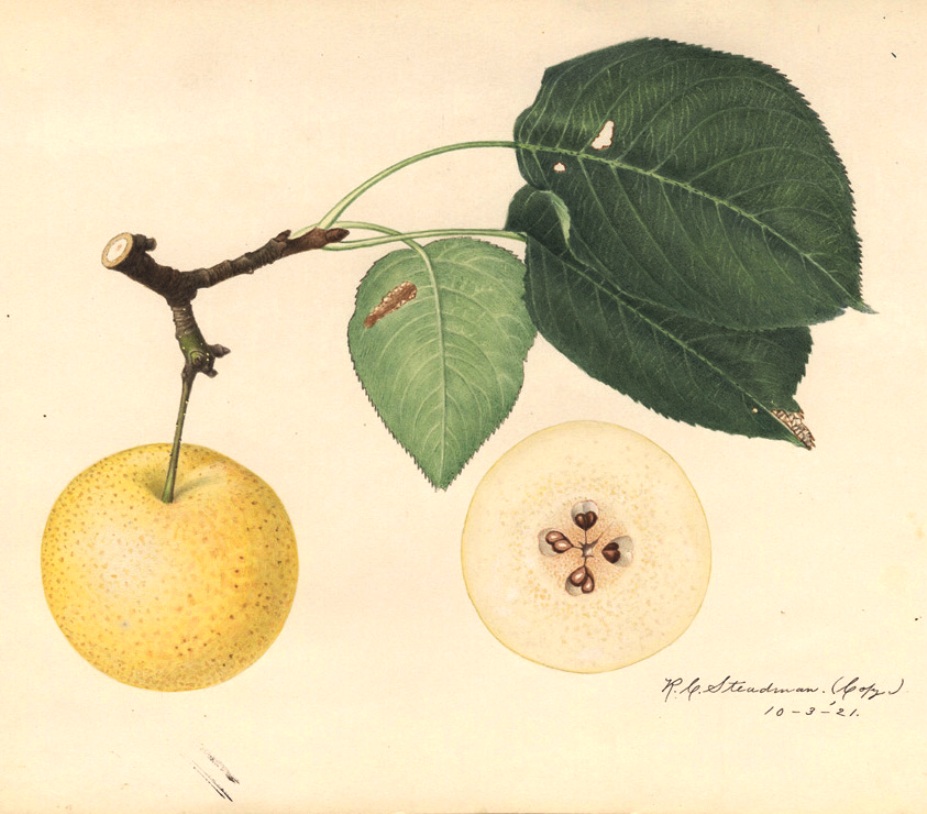 Description –
Pyrus pyrifolia is a very rustic tree, which reaches a maximum of 4-5 meters in height, with a hanging habit and large oblong, deciduous and bright green leaves. The flowers are white-pink-white, they are larger than those of the pear tree and the anthesis is in April. The fruits are round, flattened or more elongated according to the variety, small, medium or medium-large, with a light and smooth peel of greenish-yellow color and lighter lignels (more delicate to the manipulation), or rusty brown, equally with lighter lenticels. The pulp is crunchy, very juicy and, indeed, more or less watery, slightly sour and variously perfumed. The maturation is linked to the difference in variety and occurs between the end of July and the middle of September, or even in October.

Cultivation –
Nashi is a vigorous and rustic plant that adapts to most of the Italian fruit-growing areas; however it requires light, fertile, irrigable soils with a sub-acid pH as it undergoes ferric chlorosis and magnesium deficiency in clayey and calcareous ones. It is very resistant to winter cold while late frosts can cause damage especially during flowering; also the wind is harmful to the leaves of some varieties (similar to the “brusone”) and to the fruits close to the harvest, especially in the smooth-skinned varieties.
Cultivation can be done with a palmette, a vase (distance 5 x 5 m) or with a spindle, but also supports ipsilon very well.
Most varieties are self-sterile so it is essential to have a pollinating variety. There are several cultivars, among which the most important are of Japanese and Chinese origin. The cultivars differ in the shape of the fruit, the color, the age of maturation and the size. We recall above all: Chojuro (Japan, 1893), Nijisseiki (Japan, 1898), Niitaka (Japan, 1927), Shinko (Japan, 1941), Kosui (Japan, 1959), Hosui (Japan, 1972) as well as the varieties: Shinseiki; Shimseiki and tama.
For details of the cultivation technique refer to the following sheet.

Uses and Traditions –
Nashi boasts ancient farming traditions; in China it was already cultivated and consumed about 3000 years ago. The documents tell us that in the 1st century BC, during the Han dynasty, there were extensive cultivations of Nashi along the banks of the Yellow River and the Huai River. Later it was brought and cultivated first in America and later in Europe around the end of the 80s.
In the old continent cultivation had considerable interest, which then quickly decreased, so much so that today it is considered marginal and domestic consumption is rather limited.
Nashi, also known as pear-apple or Asian pear, is a fruit particularly rich in magnesium and many other minerals. In particular it is rich in water, sugars and dietary fiber, contains vitamins K, C, J, and those of group B, in particular B9 (known as folic acid).
It has very few calories and many minerals, thus optimally acting as a natural supplement thanks to the organic water that allows a perfect assimilation of the elements that make up the phytocomplex.
It is a fruit whose salient characteristic is the sweet and fresh taste with non-existent acidity, which clearly differentiates itself from the sweet sour taste of the apple or pear, to which the western consumer is usually accustomed. The fruits of some varieties are kept for six months if kept at 0 ° C.

Preparation Mode –
The fruit of Nashi is eaten fresh and is also used in fruit salads, cakes or in some salads like the classic one of rocket, pear and walnuts. In China and Korea it is also used grated in meat stews.