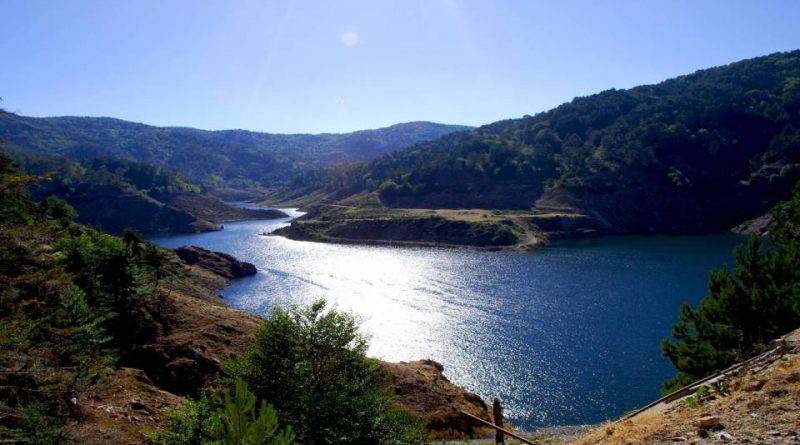 The National Park of Aspromonte, identified with the codes: WDPA 64512 and EUAP0011, was established in 1989 with the aim of protecting and safeguarding the environment of the territories of the Aspromontana section of the former National Park of Calabria, which existed until 2002. The territory of the Aspromonte National Park develops within the province of Reggio Calabria and takes its name from the Aspromonte Massif that means candid, white and dates back to the Greek populations of the Ionian coast who admired the snowy mountain formations of the massif . Inside the Park the highest peak is Montalto which with its 1955 m. s.l.m. offers a unique view of Calabria and the Sicilian coast.
The area of ​​the Aspromonte National Park is 65,647.46 hectares and includes as many as 37 municipalities in the province of Reggio Calabria; this Comuni are: Africo, Antonimina, Bagaladi, Bova, Bruzzano Zeffirio, Canolo, Cardeto, Careri, Ciminà, Cinquefrondi, Cittanova, Condofuri, Cosoleto, Delianuova, Gerace, Mammola, Molochio, Oppido Mamertina, Palizzi, Platì, Reggio Calabria, Roccaforte of the Greek, Roghudi, Samo, Sant’Agata del Bianco, Santa Cristina of Aspromonte, Sant’Eufemia of Aspromonte, San Giorgio Morgeto, San Lorenzo, San Luca, San Roberto, S.Stefano in Aspromonte, Scido, Scilla, Sinopoli , Staiti, Varapodio.
The territory of the Aspromonte National Park is a southern strip of the Apennine chain, of granitic-crystalline origin, which resembles a giant pyramid, close to the sea and which climbs up to almost 2000 m. s.l.m., with numerous peaks and different plateaus of marine sedimentary origin; deeply marked by many rivers (rivers). 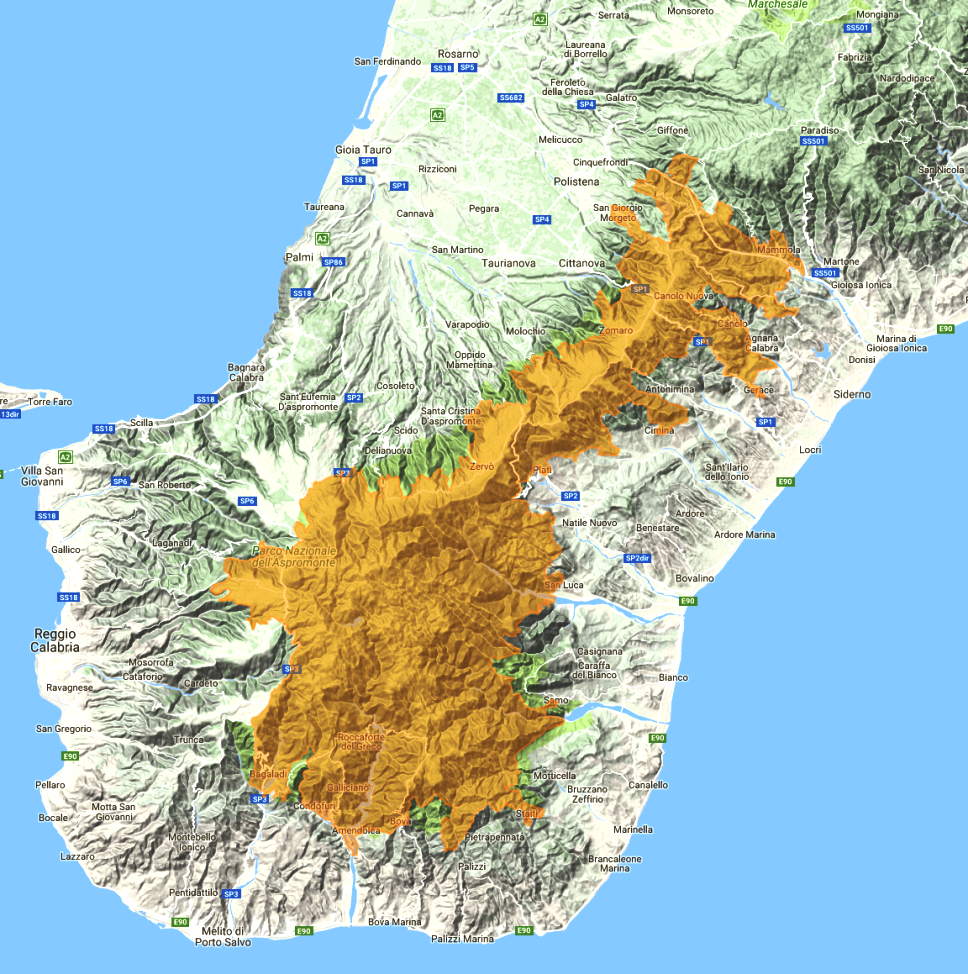 Because of its location in the center of the Mediterranean, it boasts notable historical, artistic and archaeological presences, evidence of archaic, classical, Greek, medieval and modern culture.
The territory of the Aspromonte National Park also presents a great variety of plant and animal species and enjoys particular climatic conditions that favor an environment particularly rich in biodiversity.
The flora, inside the Park, is characterized by a marked heterogeneity as a result of the low latitude, the proximity of the sea and the altitude gradient. Moreover, the two sides, Tyrrhenian and Ionic, differ in the presence of a further diversification of the vegetation.
In this territory, along the coastal strip and at low altitude, we find the typical flora of the hot sub-area of ​​the Lauretum, whose typical representatives are the xerophilous maquis (Pistacia lentiscus, Myrtus communis, Arbutus unedo, Euphorbia dendroides, Erica arborea, etc.). ) and, in the cultivated areas, citrus and olive trees. Downstream, above all, along the rivers, the riparian vegetation is established, whose most representative essences are represented by: Alnus glutinosa (black alder), Populus nigra (black poplar), Salix sp. (willow), Nerium oleander (oleander) and Tamarix (Tamerici).
Going up to higher altitudes, in the inland areas, the forest-like vegetation gradually takes over the forest, which covers about 40,000 ha. In this area, in the lower altitudes, the forest essence most present is the holm oak, while in the higher altitudes, starting from 600 meters up, the deciduous and coniferous species are increasingly present.

On the Tyrrhenian side, on the other hand, the chestnut woods meet up to 1000 meters above sea level, while in the Ionian one the deciduous oaks prevail, represented by species such as oak, oak and farnetto.
In the altimetric area between 800 and 1700 meters the black pine calabro or larch pine (Pinus nigra laricio) is representative and, from the 1200 meters up to the highest altitudes the Fagetum develops, whose most representative essences are beech and fir White.
Also important is the fauna that, with the establishment of the Aspromonte National Park, is gradually reliving a gradual increase and rebalancing.
Among the mammals in the park are the wolf (Canis lupus italicus), which is present in the central-eastern part of the massif, the wild boar (Sus scrofa), the wild cat (Felis silvestris), the marten (Martes martes), yew (Meles meles), the fox (Vulpes vulpes), the marten (Martes foina), the weasel (Mustela nivalis), the otter (Lutra lutra), which is mainly found in the river valleys, the dormouse (Glis glis), the driomio (Dryomys nitedula), and the black squirrel (Sciurus meridionalis), which is a subspecies of the northern populations that is differentiated by the coloration of the fur that is black rather than red or brown. Moreover, in order to repopulate and rebalance the park’s fauna, at the end of 2011, 75 specimens of the Italic subspecies of roe deer were reintroduced, a species that had disappeared from this territory for about a century.
Within the National Park of the Aspromonte remarkable is the presence of the avifauna, represented by numerous species of birds of prey including the Bonelli’s eagle (Hieraaetus fasciatus), almost extinct in the rest of Italy and present in the park with two couples , the golden eagle (Aquila chrysaetos), which has returned to nest in the park, and other more common species such as the sparrow-hawk (Accipiter nisus), the goshawk (Accipiter gentilis), the hawk (Pernis apivorus), the peregrine falcon (Falco peregrinus), the buzzard (Buteo buteo) and the biancone (Circaetus gallicus). There are also nocturnal birds of prey such as the eagle owl (Bubo bubo), the largest European nocturnal bird of prey, the tawny owl (Strix aluco) and the barn owl (Tyto alba). Other birds present are the rare rock partridge (Alectoris graeca) and the black woodpecker (Dryocopus martius).
In this very rich territory for ecosystems and climatic characteristics we also find numerous reptiles, including the Hoyyi viper (Vipera aspis hugyi), a subspecies that is characterized by the gray livery crossed by a brown band arranged in a zig-zag, the cervix (Elaphe quatuorlineata) and the water snake or collar natrix (Natrix natrix), which lives along the watercourses. There are also some amphibians: the spotted salamander (Salamandra salamandra), the endemic salamander with glasses (Salamandrina terdigitata), the yellow-bellied toad (Bombina variegata) and the frog (Hyla arborea). In the waterways of the park also lives the brown trout (Salmo trutta fario).

Even the entomofauna is receiving a significant qualitative and quantitative impulse, from the moment of the institution of the Park and within this it is worth remembering the most significant species, namely the oaks’ cerambice (Cerambyx cerdo), the rosalia of the Alps (Rosalia alpina) and rhinoceros beetle (Oryctes nasicornis).