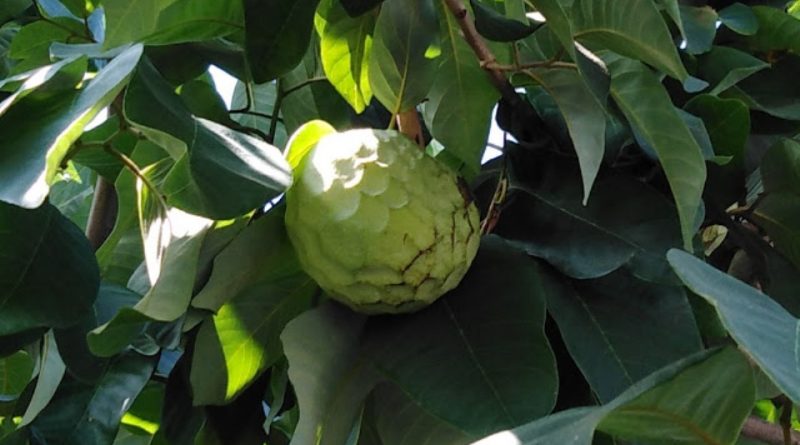 The Cherimoya (Annona cherimola Mill.) Is a bushy species belonging to the Annonaceae family.

Systematic –
From the systematic point of view it belongs to the Domain Eukaryota, Kingdom Plantae, Magnoliophyta Division, Magnoliopsida Class, Subclass Magnoliidae, Order Magnoliales, Family Annonaceae and then to the Genus Annona and to the Species A. cherimola.

Etymology –
The term Annona is a Latin form of the vernacular name used by the American Indians (Taino) for this plant. The specific epithet cherimola comes from the Quechua language where chirico is “cold” and muya “horto”, literally a plant that germinates at high altitude at low temperatures. The original word in Quechua is written as chirimuya.

Geographic Distribution and Habitat –
Cherimoya is a species native to South America and is considered native to an area that includes northern Peru, in areas between 1,500 and 2,200 m. above sea level, and southern Ecuador, in the province of Loja in the so-called Sacred Valley of Vilcabamba and in the resorts of Cariamanga, Gonzanamá and Amaluza. In this area it has been cultivated for thousands of years; while today it is widespread in many states: the United States (California and Florida), Central and South America, Southern Africa, Australia and the Mediterranean (Israel, Greece, Spain and Italy). 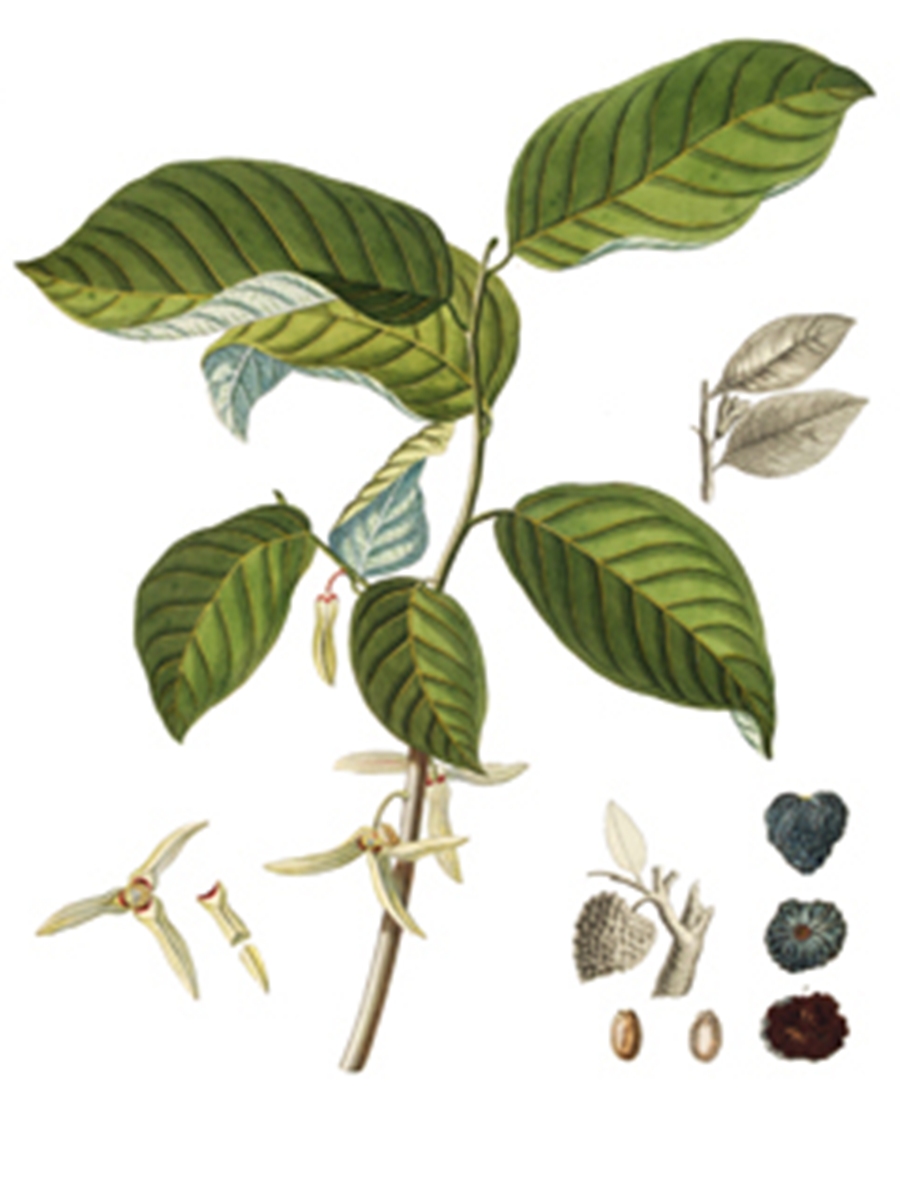 Description –
The Annona cherimola is a small plant with an upright posture, open hair and slow growth. In warm climates it is an evergreen plant, while in the climates of subtropical and temperate areas it loses all or part of the leaves. The flowers are greenish-white, solitary or gathered in groups of 2-3; they are hermaphrodites with sexual organs that ripen at different times (dicogami). Due to their structure, the flowers are difficult to fertilize, both anemophilous and entomophilous and it is for this reason that in some countries, where it is cultivated for commercial purposes, artificial pollination is used. In temperate climates, flowering occurs between the end of June and the beginning of July; the fruits ripen after 5-8 months. The fruits are infructescences (syncropium) composed of 60-70 fruits each of which contains a brown seed wrapped in an aromatic, butirorous white pulp, with a taste similar to pineapple and banana.

Cultivation –
The Annona cherimola is cultivable in temperate areas but, preferably, on the hillsides exposed to the South and next to the sea. When it grows in warm soil, it rarely fructifies and the fruits are of inferior quality. In the areas of origin, as in Ecuador, Cirimoia grows in areas with average annual temperatures of between 18 and 20 ° C, with minimums between 10 and 12 ° C between 26.5 and 30 ° C. The wild Cirimoia commonly grows in areas with annual rainfall between 800 and 1,000 mm (concentrated in 8 months a year) and with high humidity rates, between 75% and 85%. For details of the cultivation technique refer to the following sheet.

Uses and Traditions –
The Annona cherimola is a plant that produces fruits that weigh on average from 200 to 400 grams, but in some cases can reach one kilogram. The production of fruit per hectare can reach 150 quintals. The harvest of the fruits must be done before the physiological maturation, when the epicarp clears. After harvesting the fruits ripen quickly (in 3-4 days) and put in refrigerated environments irreversibly stop the ripening process.
Among the most well-known varieties we mention: Fino da Jete, Campa and Campa mejorada.
In addition to fresh consumption, the fruit can be used for the production of ice cream or a good distillate.
From a nutritional point of view, Cherimoya is an average caloric food: 100 grams of fruit, with an average of 71 calories. Of this weight, 18 grams are carbohydrates, followed by 1.6 grams of protein and 0.7 fat. The contribution of fibers, equal to 2.7 grams, is very interesting. On the macro and micronutrient content front, the fruit is above all a good source of mineral salts; in fact it contains: potassium, sodium, calcium, iron, magnesium and many others. As for vitamins, the fruit is rich in vitamin A, C and some of the B group.
Due to its composition and nutritional peculiarity, Cherimoya can guarantee some beneficial effects for the organism. Starting from the facilitation of diuresis and the control of blood pressure, through the high levels of potassium, the latter also ideal as an energizer. In addition, the good intake of fiber stimulates digestion and intestinal transit and helps to contain the absorption of sugars and, not least, it may also have effects of contrast to bad cholesterol. Finally, it seems that the food can be praised with a good antiseptic and antibacterial capacity, since it contains acetogenins, useful to fight small infections especially of the digestive tract, as well as to limit the proliferation of fungi and bacteria.
However, like any food, nutritional balance is important. The fruit should not be consumed in case of allergy or hypersensitivity. The food could also cause gastrointestinal disturbances given the accelerating effect of its fibers on digestion, while the high intake of acetogenins could be even toxic, with neurological consequences. For this reason, Cherimoya should be consumed occasionally, and generally no more than one sample a day, in any case always relying on the advice of the doctor.

Preparation Mode –
The fruit of Annona cherimola is endowed with a very good pulp, ideal for sweets and smoothies. As well as for fresh consumption, as mentioned, the fruits can be used for the production of ice creams or distillates. The fruit, which has characteristics similar to those of an apple, however, has limits when it is eaten. The fruit must be well cleaned both from the external part, that is from the green pigmented peel, and from the inside, in which numerous seeds of black color are evident and that are not edible at all.
Therefore, before savoring this very sweet fruit, it is advisable to remove all the surface and seeds and take into consideration only the white part. The aroma of the annona is very sweet and therefore recommended for the preparation of a delicious cream that the English call “apple-cream” or to be associated with desserts.
Although the English prefer to associate it with mascarpone and sugar to create that famous cream we have just talked about, there are those who prefer to prepare ice cream, sorbets and smoothie to be enjoyed in the summer. One of the main ideas for the conservation or transformation of this fruit is the preparation of an excellent jam that has nothing to envy to orange or apricot jam.