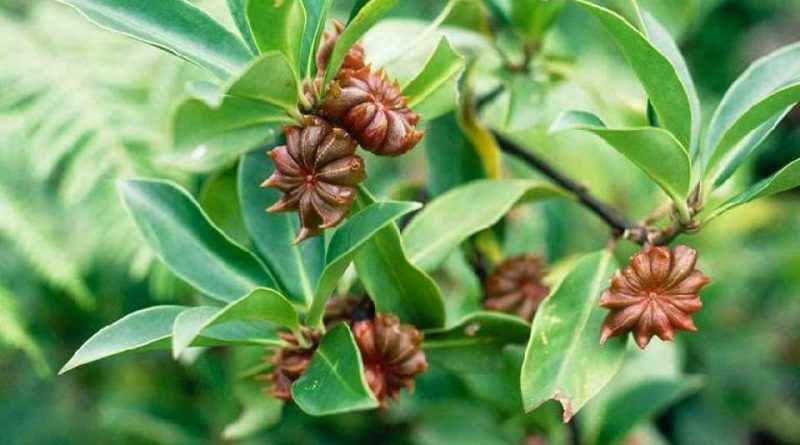 The star anise (Illicium verum Hook.f.) is an evergreen tree species belonging to the Illiciaceae family.

Systematics –
From the systematic point of view it belongs to the Domain Eukaryota, Kingdom Plantae, Magnoliophyta Division, Magnoliopsida Class, Order Austrobaileyales, Family Illiciaceae and therefore to the Gender Illicium and to the Specie I. verum.

Etymology –
Illicium comes from an illusion, that is to attract with flattery: for its delicious aroma. The specific epithet verum, comes from true, genuine, correct, original.

Geographic Distribution and Habitat –
Star anise is an aromatic evergreen shrub or arboreal species native to the forests of Southeast Asia (south of China and Vietnam). 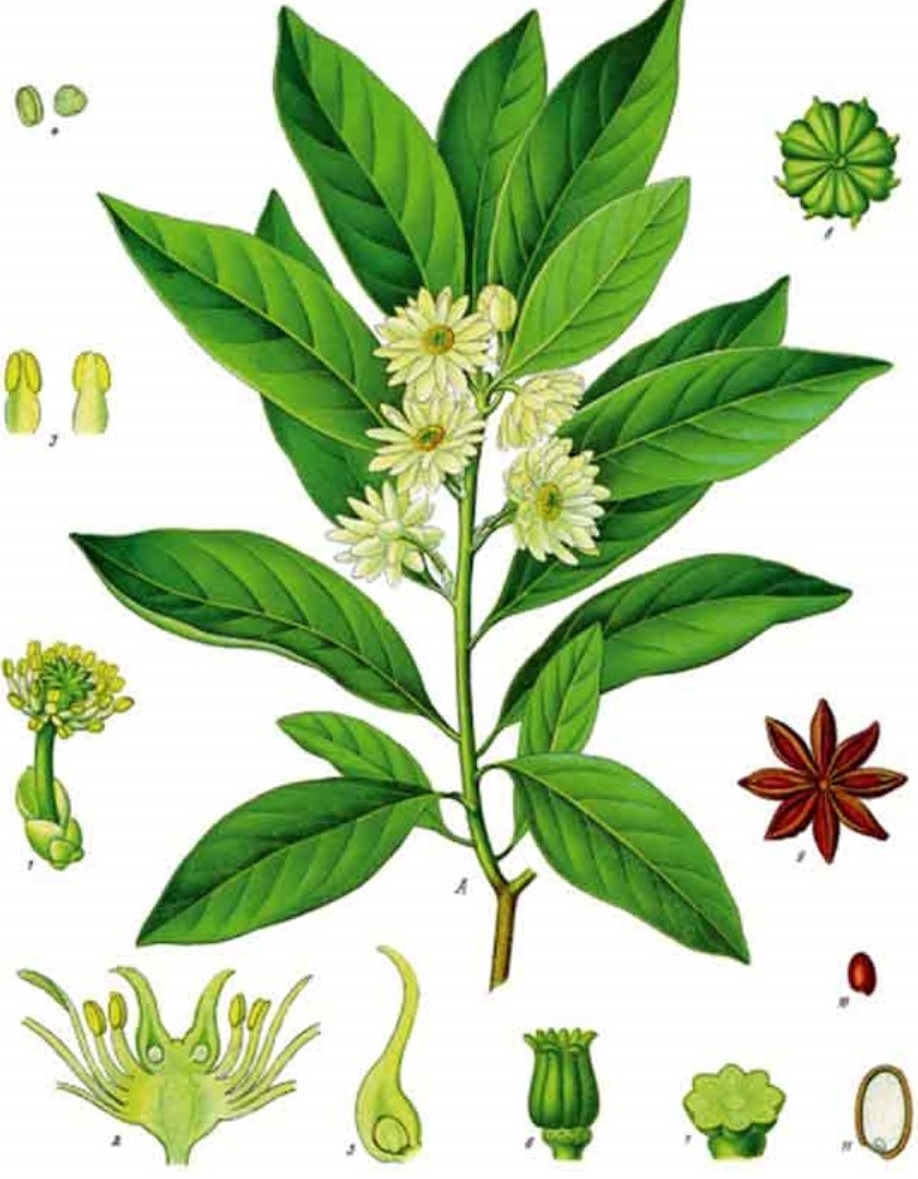 Description –
Illicium verum is a small evergreen tropical tree, tall between 5-10 meters; It has a characteristic aromatic bark, its fragrant, shiny leaves, arranged in alternate position, have an elliptical and sharp shape and are also aromatic; the axil of the leaves are formed with white-yellowish perennial formed by 15-20 petals arranged in a spiral. The flowers have numerous stamens and 8-12 carpels that give as many uniseminate follicles, arranged like the rays of a star. The fruit is a woody follicle that is formed by 8-12 lobes arranged in a star (hence the name), on a peduncle called columella. Each lobe carries a shiny seed. The drug consists of follicles, it is an essential oil whose active ingredient contains mainly anethole.

Cultivation –
Illicium verum is a plant that needs very sunny positions in order to be cultivated as best as possible; moreover, given its origins, it loves the warm places and prefers areas with long and very hot summers. If the temperature drops below -5 ° C it can be grown only in a cold greenhouse, with good lighting. If grown outdoors it should be placed in full sun and in areas sheltered from cold and dry winds. To learn more about the cultivation technique, please refer to the following sheet.

Uses and Traditions –
Under the generic name of Anice, in fact, different plants are grouped, which do not actually have botanical kinships. The plants are united by the aroma of their seeds or fruit, practically identical. Star anise is used in the kitchen as a spice and in Europe, industrially, for the production of various liqueurs including sambuca, pastis and pebbles and amatorially for the production of the typical liqueur from the Marches and Lazio mistrà.
With its ground peel we prepare the incense sticks that are lit in temples in China and especially in Japan, since the plant is considered sacred. The star anise was introduced in Europe from China around the seventeenth, since then the spice is used whole, coarsely chopped into fragments or reduced to powder. Because of the high volatility of its essential oil it is better to buy it whole, to keep it in small containers with an airtight seal and to avoid buying it already ground because in a few weeks its fragrances should be irreparably lost in the air. Its use in the West is often limited to consumption in the form of a mixture, in the mix of 5 spices (Wu xiang fen), where it is grated in equal parts together with cinnamon, cloves, fennel and Sichuan pepper, although in China to the classic formula can be added occasionally: ginger, galanga, black cardamom.
The use of this spice, however, has never been particularly widespread outside the land of origin, although the Chinese have taken it with them wherever they are undermined. A very similar species, I. religiosum, or Japanese star anise, is sometimes used as an adulterer of Chinese star anise. The distilled oil, obtained by steam distillation from the Illicium verum fruit, is an important substitute for European aniseed oil and is widely used in products with anisato flavor. Although very different from the green anise that, as mentioned, belongs to a different botanical family, their aromatic and therapeutic properties are very similar.
The active ingredients of this plant are: essential oil (up to 10%), anethole (80-90%), fixed oil, sugars, resins and tannins.
The active ingredients find application in various fields, from medicine to cooking.
In medicine it is used for:
– Stomach acidity, cramps and abdominal spasms;
– Aerofagia, difficult digestion, flatulence, meteorism;
– Asthma, phlegm in the lungs, irritation of the bronchial mucosa and cough;
– Headaches, migraines and menstrual pains;
However, it is always necessary to have the right measure when taking too high doses of the spice, in these cases it can cause particularly evident symptoms of poisoning affecting the nervous system. For this reason it is always advisable to have a medical opinion on the matter.
In general it has therefore: eupeptic, stomachic, carminative and anti-diarrheal properties.
Illicium verum is used to extract the shikimic acid used to produce important antiviral drugs.
The parts used are: the fruits (improperly called seeds) that are collected still green and dried in the sun becoming reddish-brown.

Preparation Mode –
Star anise, as an aromatic plant, is widely used in oriental cuisine to particularly flavor meat dishes. In the West it is used as an aroma for sweets and for the production of liqueurs (Anisetta) and, in this sense, the active ingredient that gives the aroma and which is rich is the anethole.
As mentioned, it is used in Europe industrially for the production of various liqueurs including sambuca and pastis.
In China, star anise, where it is an essential ingredient in the mixture of five spices, is often used to flavor poultry and pork dishes. The Vietnamese use it in the characteristic pho, a typical beef broth. It is ideal to give flavor and aroma to roast chicken, it goes well with braised fish, molluscs in general and broths. It also gives a particular taste to cooked vegetables like leeks and pumpkins. It is also used as an aromatizer for chewing gums and confectioners.
Some preparations based on star anise can be:
– Infusion: pour a cup of boiling water over 5 g of dried star anise seeds, leave to infuse for 10-15 minutes, then pour;
– Powder: crush and chop the fruit, or just the seeds, in a mortar, or directly with the blender. The recommended dose is a teaspoon, in host, or mixed with honey or jam, after each main meal;
– Tincture: macerate about 20 g of star anise seeds in 100 g of 70 ° alcohol. After 15-20 days pour and filter with the appropriate cloth. Store the tincture in a small bottle of dark glass with a dropper cap. According to the instructions, take 25-30 drops dissolved in a little warm water, or on a sugar cube;
– Medicinal wine: macerate in a liter of good marsala 150 g of star anise seeds, then leave to pulp for fifteen days;
– Tooth and gum tonic: put in a clay or porcelain container the following ingredients: 30 g of star anise powder, eight cloves in powder 8 g of cinnamon and 10 g of flowering tops of peppermint (or 1 g of essence of Mint), leave to macerate in 300 g of alcohol and 200 g of water for 10-12 days, then filter and store in a small bottle with screw cap. Use the so prepared tonic (a few drops of tonic in a glass of warm water) to make refreshing rinses, disinfectants, to whiten the teeth, tone the throat and gums;
– Perfumed breath: chew some whole seeds of star anise if necessary;
– Aroma with star anise: in a dark glass jar with a screw cap, simmer 3 tablespoons of aniseed powder and a few drops of aniseed essential oil in half a cup of ethyl alcohol at room temperature. Leave to stand for ten days stirring occasionally, then filter and decant in a small bottle of dark glass.