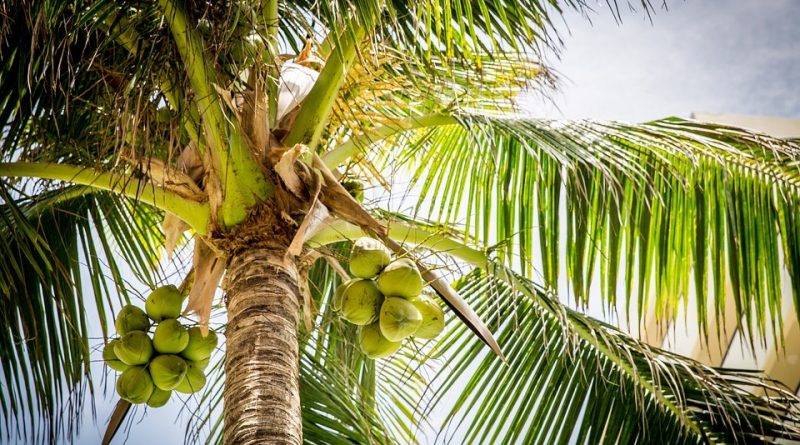 The coconut palm (Cocos nucifera L., 1753) is an arboreal species belonging to the Arecaceae family.

Systematics –
From the systematic point of view it belongs to the Eukaryota Domain, Kingdom Plantae, Magnoliophyta Division, Liliopsida Class, Arecales Order, Arecaceae Family, Arecoideae Subfamily, Cocoseae Tribe, Butiinae Subtribal and then to the Cocos Genus and to the C. nucifera Species.

Etymology –
The term Cocos comes from the Portuguese coco which means head, skull: for the three indentations of the coconut that make it look like a face; according to the Spanish linguist Fernando Diez Losada the term coco was used by the sailors of Vasco de Gama to whom the coconut shell recalled a ghost or a witch of Portuguese folklore, called respectively coco and coca. The specific nucifera epithet comes from nux, núcis nut nut and from fero bring: that is that it produces fruits similar to walnuts or hazelnuts.

Geographic Distribution and Habitat –
Cocos nucifera has an area of ​​quite controversial origin, also due to the anthropic action that has contributed to its diffusion in ancient times; the areas of possible origin are those of the Indonesian archipelago and South America.
Plant already widespread in antiquity with all its varieties, currently the main areas of diffusion of the coconut palm are located between the twenty-second parallel north and the twenty-second parallel south. The characteristic habitat is on the coasts of tropical regions with annual rainfall between 1,300 and 2,000 mm, up to altitudes of 600 m s.l.m. 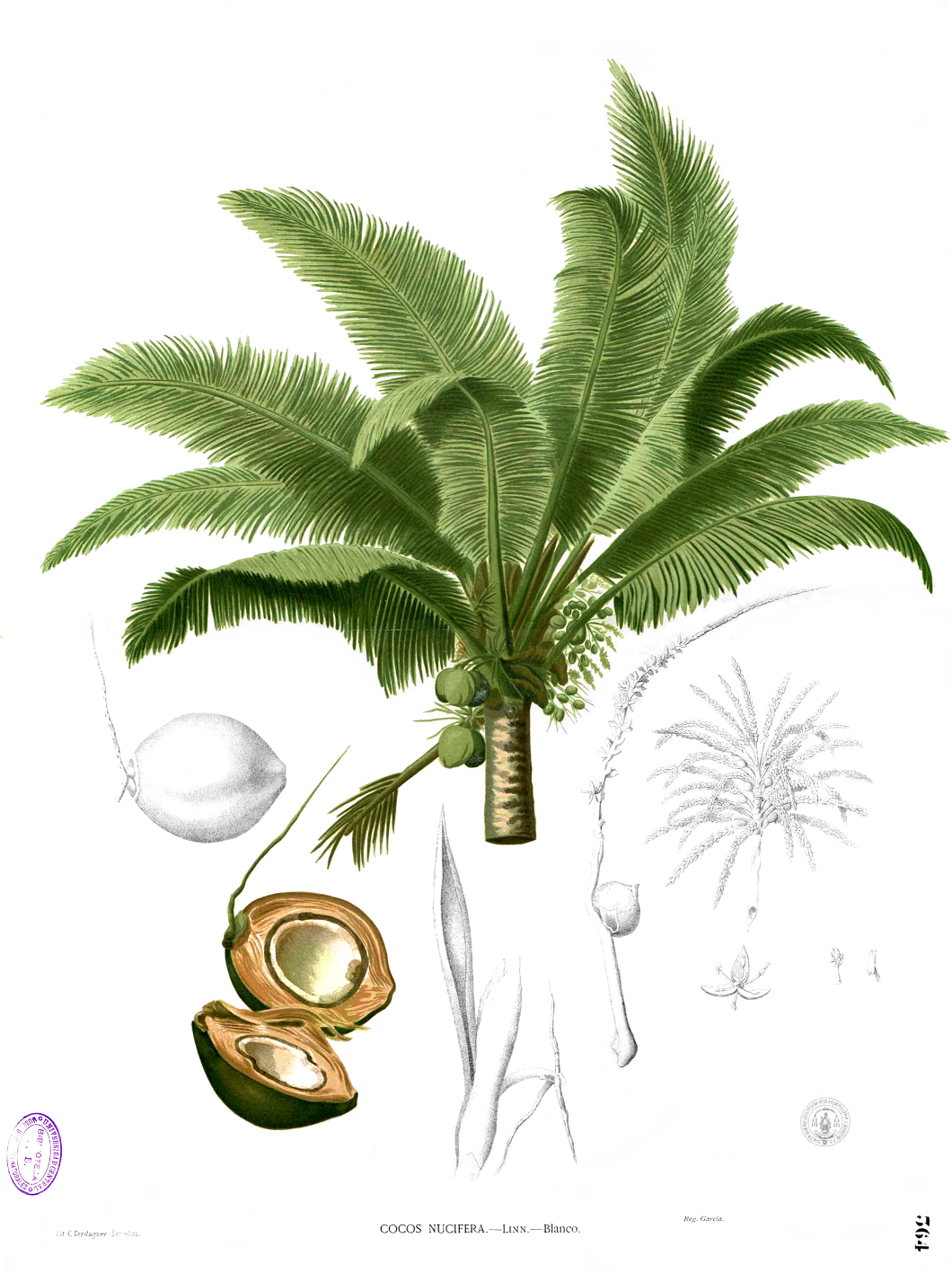 Description –
The coconut palm is distinguished by a columnar and slender stem, which can reach an average height between 20 and 40 m, with a diameter of 50-70 cm at the base and 25-35 cm at the top; the surface has a gray color, where the scars left by the leaves and fallen racemes are evident; the stem ends with a crown of large leaves.
The leaves are paripinnate, 4-5 m long, with the base dilated to form a large sheath; these are erected in the first two years of life and subsequently falling, formed by very light leaflets, elongated and briefly pitted, divided into two, very striated and slightly arched.
The flowers are small and yellowish in spadix inflorescences, branched into secondary hooks, protected externally by a large concave spate. Each plant produces 6 to 12 inflorescences each year.
Cocos nucifera is a mono-flower plant with dichlini flowers; the female flowers are in the basal part of the branches of the spadix while the male ones are very numerous (about 300 for each branch of the spadix). Pollination is mixed, both anemophilous and entomophilous.
The fruits are drupes (coconuts) voluminous about 1 kg of weight, with exocarp (peel) smooth and thin, generally red-brownish, fibrous and light mesocarp at maturity that is closely combined with the woody endocarp (shell) It is hard.
The seed is made from the pulp of the walnut; has a very thin brown coat, closely adhering to the endosperm rich in fats (copra), formed by a layer 1-3 cm thick that forms a cavity containing a milky liquid, called “coconut water”; the embryo is wrapped by the endosperm at one end of the fruit.

Cultivation –
As for the pedoclimatic conditions for the cultivation of the coconut palm it is specified that, in the Mediterranean climate it is possible to grow in a warm greenhouse, with confined air and high environmental humidity, filtered sunlight, fertilizing twice a month in the summer, with medium liquid fertilizer, frequent watering without exceeding the amount and sprinkling of the canopy, avoiding stagnation of water, rindrando annually, replacing the surface of the earth with potting soil mixed with heather, enriched with organic soil and lightened with sand. It is in fact a species with particular needs that, outside its habitat, do not allow the cultivation for the production of coconuts. Coconut palms are not very demanding regarding the nature of the soil, while humidity and aeration are essential. For the cultivation technique, the following sheet can be consulted.

Uses and Traditions –
The coconut palm was already widespread, since ancient times, throughout the Pacific area with its many varieties that differ in color, size and shape of the fruit. This cultivation was later discovered by the Portuguese and by the Spaniards who explored the western coasts of central-southern America and in 1525 began to cultivate it, spreading it also on the eastern coasts.
An important detail for the spread of this species in the globe is the ability of coconuts to float on sea water. Coconuts are able to sprout after 110 days of immersion in sea water, a period when they can travel up to 5000 kilometers. This would explain, in fact, the spread of the Cocos nucifera in large areas of the globe even before the anthropic intervention.
The coconut palm is often cultivated in temperate areas as an ornamental and pot plant, as long as the humidity and temperature conditions allow it.
The coconut palm is cultivated for many purposes:
– in the countries of origin, for the production of coconuts used for fresh consumption;
– to obtain the copra for the production of coconut margarine, a vegetable oil with a high melting point used in pastry as a substitute for butter; for the manufacture of soaps, glues and sockets.
– for by-products of industrial copra processing, such as copra cake, which are used as animal feed.
– for the production of a flour used for food purposes, derived from copra;
– for the production of coir, obtained from the fibers of the mesocarp, to obtain interweaving works, carpets and ropes;
– for the production of palm wine, palm vinegar, palm sugar and palm brandy, obtained from the sap obtained from the incision of young inflorescences;
– the same fresh sap is commonly consumed in Kiribati: called karewe, which is then cooked to make a syrup called kamaimai.
– For young buds that are edible (palm kale);
– For the production of coconut wood, obtained from the jambs, for the production of furniture, umbrella handles, or rural homes;
– For the production of coconut water that, in addition to being refreshing, sweet and refreshing, properties that have made it very popular in the summer, has very few fats and calories and is free of cholesterol and has abundant amounts of sodium , potassium, magnesium and calcium. All these features make it an excellent supplement after intense physical activity.
– For the production of coconut oil which is one of the few completely saturated natural vegetable food oils for which the habitual use in the diet, even of its derivatives, must be carefully controlled.
Moreover, in its areas of origin, the fronds are used as fibers to weave hats, mats and roofs for the huts, while Tamil women in Sri Lanka use the oil obtained from coconut milk, after a long process for cosmetic purposes and to soften hair.
These populations also drink coconut milk mixed with finely chopped pepper leaves as a cure for vision disorders.
Coconut palm oil is also used in shaving products (cream, soap and shaving foam) and also in tanning products.
The average composition of a coconut is: 50% of water, with the remainder, made up of fibers, carbohydrates, sugars and lipids; to these are added the mineral salts, in greater concentration, which are: iron, potassium, copper, zinc, magnesium, phosphorus and sodium.
Isoleucine, serine, threonine, glutamic acid, arginine, aspartic acid, phenylalanine, glycine and cystine, are the most abundant amino acids. The abundance of vitamins B and C helps in the states of weakness, fatigue and relieves stress.

Preparation Mode –
In addition to all industrial uses for both industrial and food purposes, the most widely used in Western countries is coconut. Coconut is appreciated both the pulp and the liquid contained inside, which should not be confused with coconut milk which is instead obtained from the ground pulp, combined with water and subsequently filtered, the milk is so nutritious that some populations still they use it as a substitute for breast milk.
Coconut butter is less common in the Mediterranean basin, but this butter, obtained from the dried coconut pulp, has surprising properties, which must be taken into consideration even if the habits of the Mediterranean diet are outside; it is in fact obtained from the coconut oil which appears in a solid form, similar to the consistency of the butter, and is therefore also called coconut butter; it melts when it reaches the temperature of 24 – 25 degrees and should not be kept in the fridge.
Obviously we are referring to pure (or virgin) coconut butter, which has not undergone any type of artificial intervention (pasteurization, hydrogenation or other refining) and which maintains the fragrance and flavor of the coconut unchanged, as well as the antioxidant content and its many other properties.
In the Philippines from the fermentation of coconut water is produced the sweet known as nata de coco.