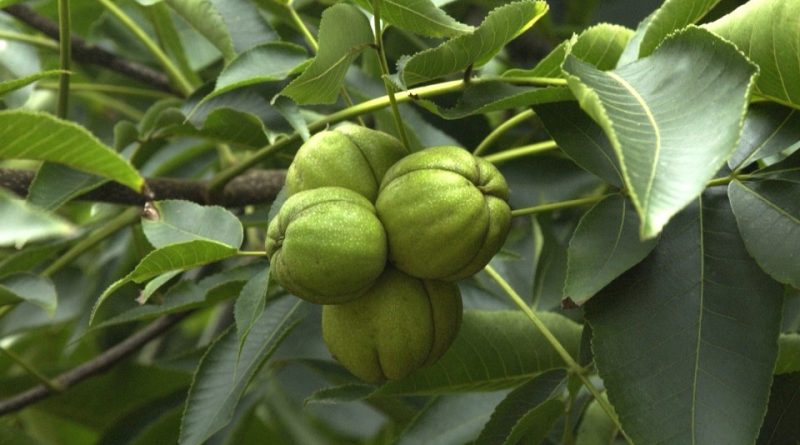 The White Walnut of America, known in the places of origin as Shagbark Hickory (Carya ovata (Mill.) K.Koch), is an arboreal species belonging to the Juglandaceae family.

Systematics –
From the systematic point of view it belongs to the Eukaryota Domain, Kingdom Plantae, Magnoliophyta Division, Magnoliopsida Class, Subclass Hamamelididae, Juglandales Order, Juglandaceae Family and then to the Genus Carya and to the Specie C. ovata.

Etymology –
The term Carya derives from the Greek κᾰρύα carya the walnut Juglans regia (whose fruits were called κάρυον cáryon). The specific ovate epithet is due to the oval shape of its leaves.

Geographic Distribution and Habitat –
The White Walnut of America is a tree native to North America, where it forms mixed forests of broad-leaved trees. It is a common plant in the eastern United States and in south-eastern Canada. It was introduced in Europe at the beginning of the 17th century and its greatest use was mainly in Germany for forest experimentation. 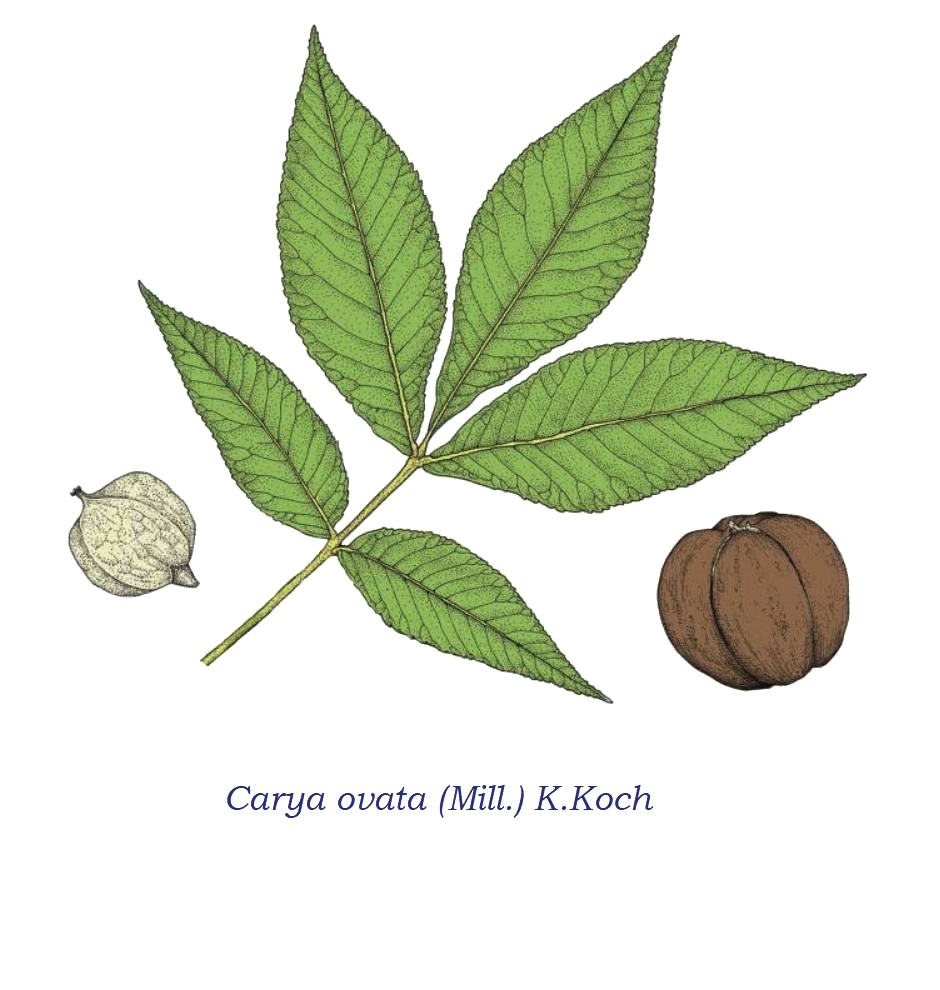 Description –
The Carya ovata is an imposing tree that can reach 40 meters in the area of ​​origin, with an expanded foliage especially in vertical, dark green. It has a straight trunk that in not too young specimens has a grayish rind that flakes in longitudinal plates raised before falling. The leaves are deciduous, of oval shape and toothed at the margin, alternate, petiolate, up to 30 cm long, imparipinnate; they are made up of 2-3 pairs of segments and one generally larger apical. The male flowers are grouped in groups of three in pendulous cylindrical animals, while the female ones are sessile and grouped in groups of 2-3 on the lateral branches. The antesis is in the spring period. The fruit is a trima, similar to a walnut, but with the hull that at maturity opens in 4 valves exposing a woody pericarp, furrowed on the surface, which contains an oily, edible kernel.

Cultivation –
For the cultivation the White Walnut of America prefers sunny environments; these trees have very slow growth, but it is still necessary to evaluate the space necessary for an appropriate development of the plant, before placing it in the home. In general, they prefer cool climates, with summers that are not too hot and grow more conspicuously with a mild climate. As far as the pedological aspects are concerned, the White Walnut of America or Pecan grows without problems in any soil, but generally it prefers soils with pH tending to acid; it is advisable to plant a mature organic fertilizer at the foot of the plant every year, in spring and autumn. For young specimens it is advisable to provide water in the case of long periods of drought.
As for multiplication, the majority of plants used for cultivation and subsequent harvesting of fruits are obtained from grafted varieties; if you still want to multiply a Carya ovata plant, without the worry of the future harvest, it is possible to do it using the seeds, or taking semi-woody cuttings, at the end of summer.

Uses and Traditions –
The nuts of the Shagbark Hickory tree played a fundamental role in the diet of the American Indians and early settlers hundreds of years ago. The indigenous tradition involved first harvesting and then a drying period of the nuts (about a week). Once dry, the walnuts were extracted from the resistant white shells. It was a very delicate process, which required a lot of patience, in addition to using a specific tool, designed to extract the fruit from the shell without breaking it. The walnuts have a delicately aromatic and very sweet taste and as well as for human food they are very appetite for squirrels.
The wood of this tree is very heavy, hard and durable and flexible and is used for the manufacture of golf clubs and baseball but also axles, handles, axes, plows, skis and sticks. In addition, Carya ovata wood is particularly appreciated for the scent it emanates during meat smoking.
In Europe it is used for ornamental purposes in parks.
These fruits do not lend themselves very well to commercial production because of the long time it takes for a tree to produce considerable crops and also because production is very alternating from year to year. In fact, the Carya ovata begins to produce fruit at about 10 years, but up to 40 years production is not particularly abundant and then stabilized for at least 100 years. Moreover, in certain years, the entire crop can be lost for animal predation.
The bark of Hickory shagbark is also used to flavor a syrup of consistency similar to maple syrup and with a slightly sour, salty and smoked taste.
The name of the walnut Shagbark Hickory (Carya ovata) refers both to its appearance and to its use: the older trees are recognizable by their wiry wreath (shaggy bark in English), while the word hickory derives from “pawcohiccora”, a term of the Algonquin dialect that indicates the dish that is obtained by grinding the walnuts.

Preparation Mode –
The White Walnut of America, as well as a fundamental food, especially in the past, for the natives of America is now used for the collection and consumption of its walnuts and to extract from its bark a syrup of consistency similar to the syrup of Maple.