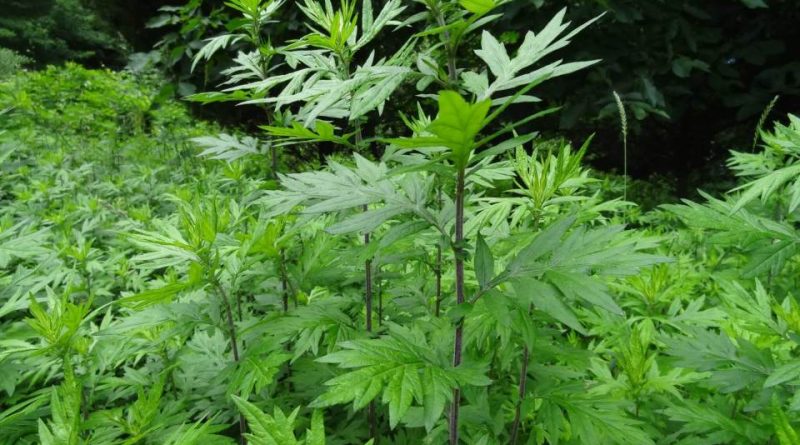 The common Artemisia, also known by the names of: Wild wormwood, Amarella, Canapaccio (Artemisia vulgaris L., 1753) is a shrub species of the Asteraceae family.

Etymology –
The generic term Artemisia comes from Ἄρτεμις Artemis Artemide, Greek name of the goddess Diana: a genus already mentioned in Pliny; according to some authors, Artemisia II of Caria (Αρτεμισία Artemisía? -350 BC), sister and wife of Mausolus, who would have given her name to this plant. the specific epithet vulgaris is the derivation of vúlgus volgo: very common, ordinary for the great diffusion, banal.

Geographic Distribution and Habitat –
The common Artemisia is a native species of the temperate zones of Europe, Asia and North Africa, but also naturalized in North America. The plant is quite commonly throughout Italy. On the Alpine arc is present everywhere in both the Italian part and across the border. It is also present on other European reliefs apart from the Dinaric Alps. Outside Europe it is present in North Africa (Algeria and Tunisia), in Asia (temperate) and in North America. It is found spontaneous especially on the slopes, near the edges of the roads, in the ruderal and uncultivated areas such as abandoned fields or places close to watercourses; but also in cultivated fields, in crops in general and in vineyards, where it is considered both a pest and a sinantropa. It is very rustic and evergreen if the climate allows it and grows on both calcareous and siliceous substrates with neutral pH and soil with high nutritional values, but on average humid. It is widespread up to a maximum altitude of 1800 m s.l.m .. 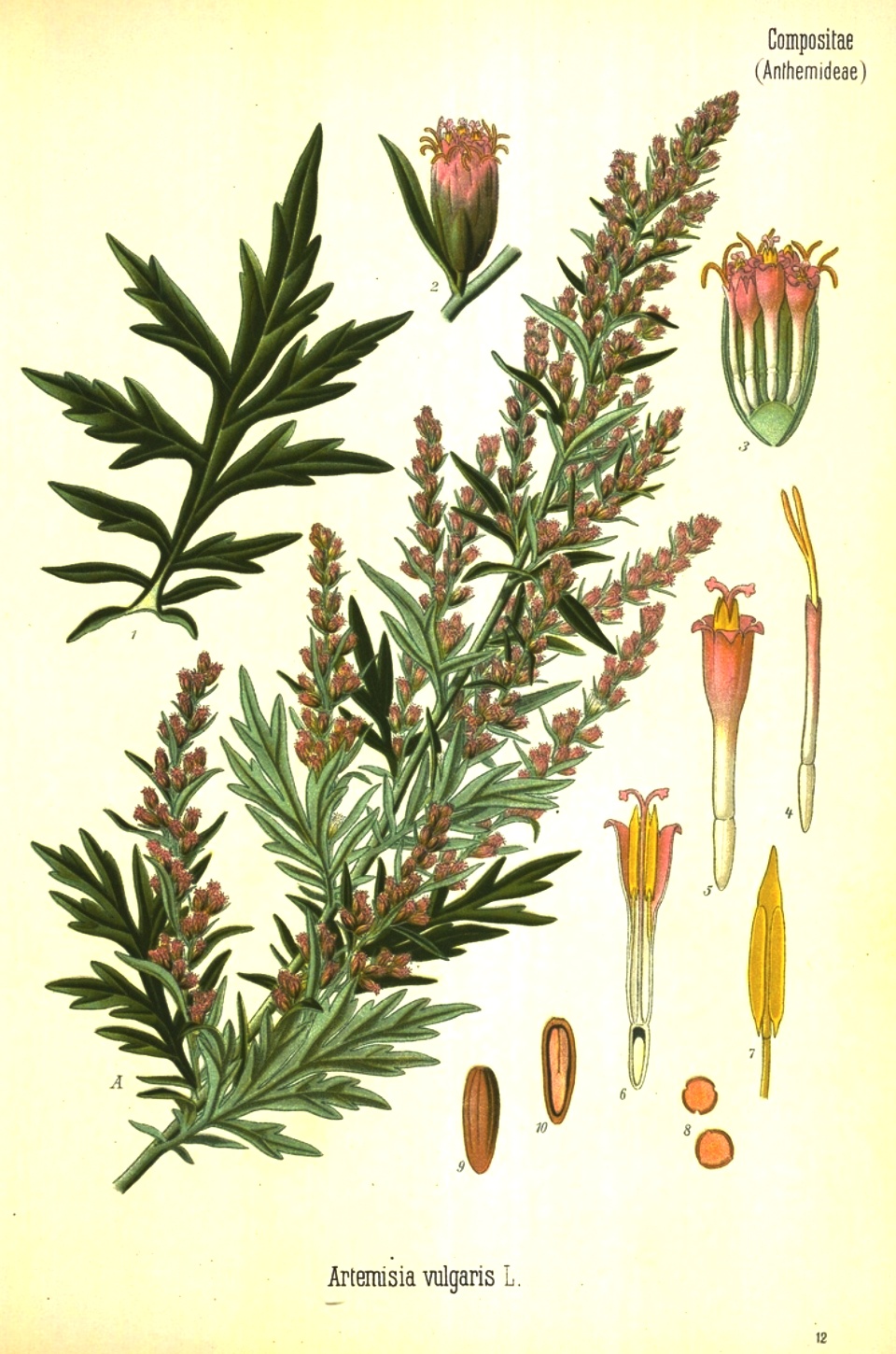 Description –
Artemisia vulgaris is a shrubby perennial shrubby species without stolons that emits a faint “vermuth” odor. The stem is erect reddish, streaky, ramosissimo that develops on average between 50 and 150 cm. It has a short and oblique wooden root. The leaves are alternate, pennatifis with first-order segments dentate, lacinie oval, lanceolate, incised-toothed, green and glabrous above, whitish and tomentose below. The lower ones with 2-4 toothed lacinias per side, half-embracing, with 4-6 mm wide lamina in the apical portion, reduced to the rachis only in the basal portion, the upper leaves reduced and linear. The flowers are tubulose reddish-yellow, gathered in ovoid subsessile flower heads in ample pyramidal leaves panicle, tomentose or densely woolly envelope, glandular corolla. The fruits are oblong glabrous achenes, pointed, smooth and without pappus.

Cultivation –
It is very rustic and evergreen if the weather allows it. The preferred substrate is both calcareous and siliceous with neutral pH, or slightly acidic, and soil with high nutritional values, but medium wet.
The common Artemisia prefers quite sunny places and it is a plant that does not require particular irrigation contributions, able to vegetate according to the normal natural vegetative cycle. Also from the nutritional point of view it does not need any particular contributions, being a plant that is then put in rotation, if its cultivation becomes repeated and periodic. As for the cultivation technique, refer to the following sheet.

Uses and Traditions –
In ancient times the artemisia was used and offered as a gift to the gods during the sacrificial rituals, carried out so that a good harvest could be obtained, since it was considered the symbol of woman and fertility. This consideration can be found in the meaning of the name of the plant that translates from the Greek as a great Artemes, that is healthy. It was also a plant consecrated to the goddess Artemis, the Greek divinity who had the task of protecting women during their life and especially during childbirth.
From the common artemisia (as well as from the artemisia absinthium) we extract the wormwood, a digestive and tonic substance that for centuries was the main ingredient of a distillate used abundantly by the artists, first only European then also American but, who was banned because of the addiction it procured. It has long been discovered that it was not wormwood that caused addiction but the alcohol that was added to the distillate.
As evidence of the use of absinthe based drink and its effects there is a famous painting by Edgar Degas, which is in the Musée d’Orsay in Paris, entitled “L’Absinthe” (L’Absinthe), of the 1876. The painting set in a Parisian Café, Café de la Nuovelle Athènes in Place Pigalle, represents two characters, the engraver Marcellin Desboutin and the actress Ellen Andrée, famous at the time of the painter, who drink the liquor based on absinthe and highlights the stunning effect that this liqueur has on the two protagonists.
Even today there is a myth, linked to the tonic and strengthening power of the plant, according to which putting some Artemisia leaf in the shoes in the morning, those shoes would allow you to travel many miles without making you feel the fatigue.
Artemisia vulgaris contains various essential oils and various terpenoids such as eucalyptol, thujone and cineol; it also contains flavonoids and coumarin derivatives. The plant is a medicinal plant and is used in Chinese and Japanese folk medicine for the preparation of moxa (from Japanese moe kusa = burning herb), a medicine obtained by crushing the plant into a mortar to obtain a woolly mixture with which to prepare balls or cones that, once resting on specific points of the skin (corresponding to acupuncture points), are burned.
Also according to folk medicine, it has innumerable medicinal properties:
– antiseptic (property to prevent or slow down the development of microbes);
– antispasmodic (reduces muscle spasms, and also relaxes the nervous system);
– carminative (favors the leakage of intestinal gases);
– diaphoretic (facilitates skin transpiration);
– emmenagoga (regulates menstrual flow);
– expectorant (favors the expulsion of bronchial secretions);
– eupeptic (promotes digestion);
– bitter tonic (digestive);
– antidiabetic (from the roots).
Common artemisia can be confused with other species of the same genus. For example with the A. verlotiorum Lamotte species very close and often confused, the latter has leaf laminae with whole segments and horizontal stolons, it prefers environments with moist soils. A. vulgaris has yellow flowers that bloom in August-September, while A. verlotorum has reddish-colored flowers that bloom in September-October. Probably hybrids between A. vulgaris L. and A. absinthium L., described as var., Are reported in the central valleys of the valleys. dressed.

Preparation Mode –
The cooked or raw leaves of common artemisia, added to the diet, thanks to their bitter aroma, help digestion; this is why in many areas they are mainly prepared as a condiment for fatty foods. The leaves are also used as tea, or to flavor the beer.