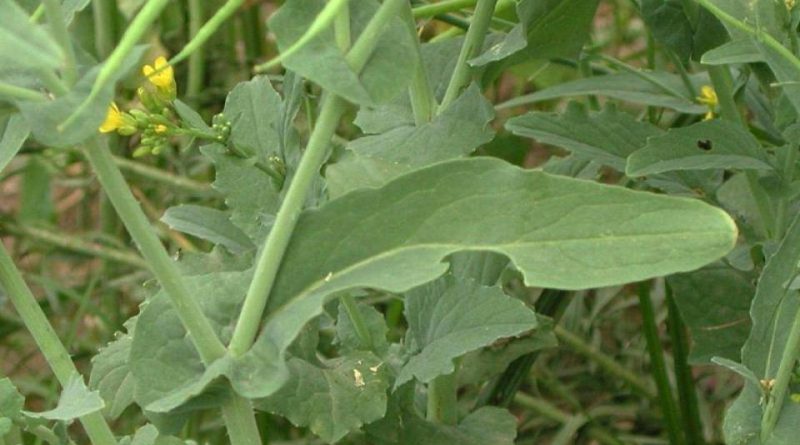 The turnip (Brassica rapa L.) is an herbaceous species belonging to the Brassicaceae family.

Systematics –
From the systematic point of view it belongs to the Domain Eukaryota, Kingdom Plantae, Magnoliophyta Division, Magnoliopsida Class, Order Capparales, Family Brassicaceae and then to the Genus Brassica and to the Specie B. rapa.

Etymology –
The term Brassica comes from the Latin name of the cabbage described by several authors, attested in literature from Plautus (III-II century BC). The origin of this name is uncertain and has been traced back to Greek or Celtic voices, without totally convincing proof. Several etymological texts refer to the word Βράσκη braske, according to Hesychius used by the Italics in Magna Graecia to indicate the cabbage. The specific epithet rapa derives from rpa or rapum rapa in Columella & al. (from the Greek ρᾰπυς rápys, assonant with ρα ra, contraction of ῥίζα rhiza root, and from πούς pous foot).

Geographic Distribution and Habitat –
The turnip is a vegetable originally from Western Siberia and later established itself in the Mediterranean basin, consumed especially in winter. It is a typically Mediterranean production very sought after in the autumn-winter period. The most widespread regions are Lazio, Puglia and Campania. In its natural state it is found mainly in agricultural fields, in ruder areas, in stubble, on the edge of railroad tracks and as invasive in neglected agricultural land. 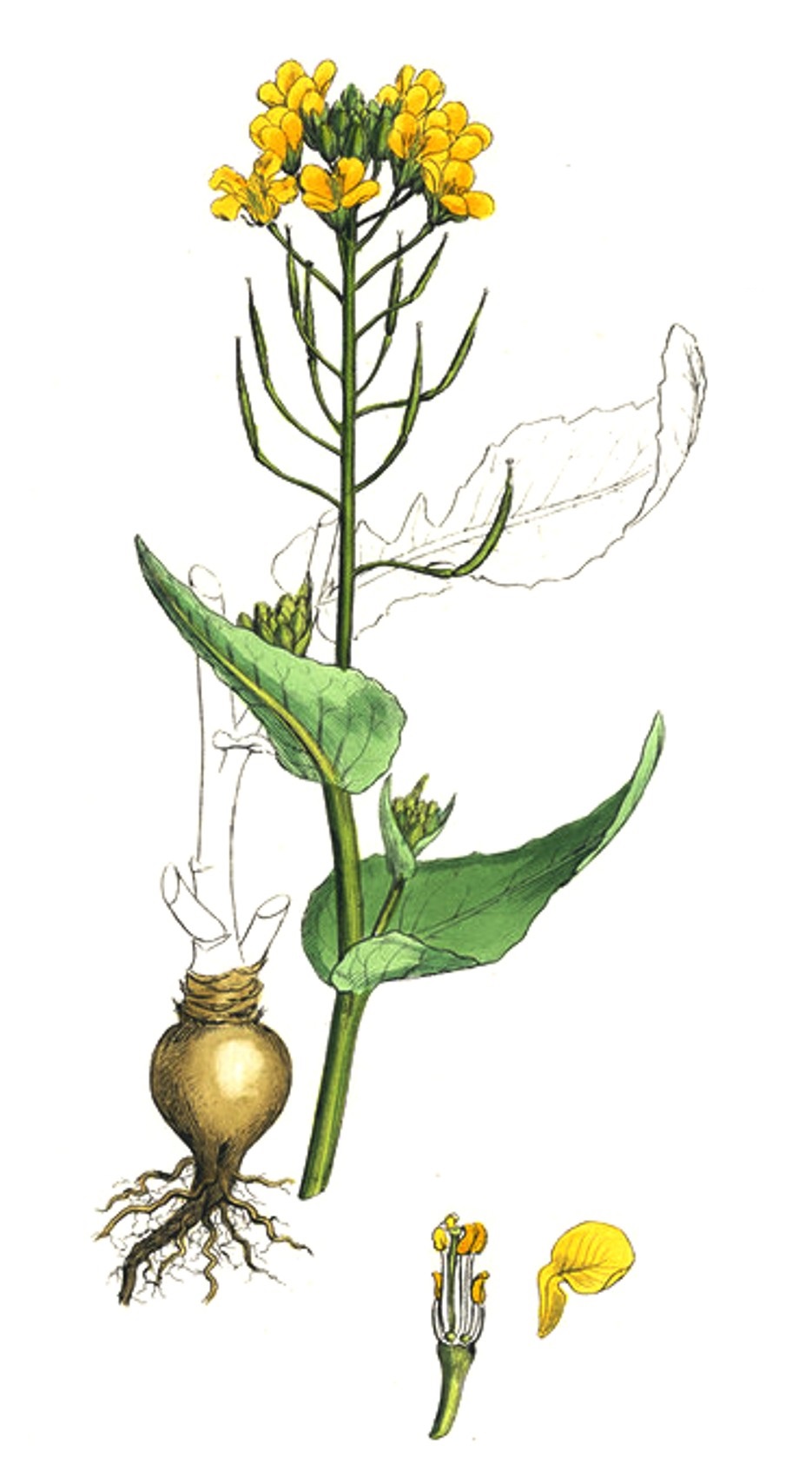 Description –
La Rapa is a biennial cycle crucifer (annual in culture). In the first year it forms a fleshy root of 5-10 cm of diameter, of various shapes and sizes (globose, globose-flattened, elongated); the color of the root is white – yellow, with shades of violet or green red; the pulp is white and crunchy; the basal leaves are provided with elongated petiole with a whole, lobed or lyred flap. In the second year it emits a flowering stem, branched about 80 cm tall with lanceolate leaves. The flowers are yellow, hermaphrodite and gathered in umbrella-shaped racemes; they have 4 petals, 6 stamens, a bilocular supero ovary that gives origin to a cylindrical siliqua, containing 15-20 spherical brown seeds. Fertilization is generally crossed, both entomophilous and anemophilous. The duration of the germination is 4-5 years.

Cultivation –
The Brassica rapa is a two-year reproductive cycle species, so the cultivation cycle can be annual or biennial according to the product to be harvested. The turnip is well suited to moist temperate climates and resists well in the cold, down to -10 ° C. Normally flower induction takes place in long day conditions after root formation, then in spring.
It is a species that adapts to different types of soil, but prefers those deep, fresh and well drained, with pH between 6.5 and 7.5 and with low salinity. The nutritional needs are medium low, while the water ones are high. For the cultivation technique you can consult the following sheet.

Uses and Traditions –
The turnip is widely cultivated as a vegetable, which is consumed, according to the botanical varieties, the leaves, the root, the flowered tops, the oily seed. The varieties are distinguished according to the shape and color of the root and the time of cultivation.
The turnip is known and consumed since prehistoric times. At the time of the ancient Greeks and Romans, the turnip was consumed by poor country people and was despised by the richest classes. Later in the Middle Ages, and until the eighteenth century, the turnip was used as a winter food for animals. The European immigrants introduced the cultivation of the turnip also in the United States and in Canada.
Different varieties of turnips are grown, the most widespread in Italy are the turnip of Milan, with a typically white violet color with a flat spherical shape, the Norfolk turnip and the Nancy turnip, both with a round shape. In Piedmont the Caprauna turnip is grown with a round and slightly flattened shape, it grows at altitudes between 800 and 1,500 meters, and is typical of the town of Caprauna, in the province of Cuneo. It is large, from white to yellowish, has a sweeter and more delicate flavor than other types, is used for the bagna caoda and with the sciancui, a paste similar to the maltagliati.
The turnips are low in calories, composed mainly of water and mineral salts (potassium, phosphorus, calcium and sodium), contain vitamin C and amino acids. They have diuretic and depurative properties, anti-inflammatory, they are good for hair, bones and skin.
There is a Scottish tradition according to which the “gumshoe heads”, bizarre sculptures made from turnips, are placed on windows and doors to protect the house from evil spirits during the night of Halloween. Among the Italian idioms we remember: being a head of turnip or being a dull person, with limited intelligence and wanting to get blood out of a turnip or pretend from someone a mental alertness that does not have.

Preparation Mode –
The fleshy root is used as well as the leaves as cooked vegetables. In some regions it is also used for livestock feeding.
Cima di rapa (also known as Broccoletto di rapa) is grown for the use of the inflorescences and the tender part of the stem with the leaves, as cooked vegetables.
The taste of the turnip is rather sweet and the consistency is a little spongy; the leaves can be consumed instead of turnip tops or used as fodder. If the turnips are to be boiled it is advisable not to cut the small radicle and do not cut the upper collar to prevent them from cooking with water.
They are also good stewed in a pan with a little oil and a clove of garlic and the addition of very little cream at the end of cooking, nutmeg and black pepper.
Good also stewed with pieces of sausage or diced bacon. You can also fill them (after al dente cooking) with advanced meats and part of the internal pulp carved out as you do with other stuffed vegetables.
Due to the considerable presence of cellulose, however, the turnip is difficult to digest, although it has a wide use in the preparation of soups, soups and risottos, and enters the composition of the gardener.
The turnip is the main ingredient of Brovada, a typical dish of Friuli that is obtained by macerating the turnips in the marc and then cook them in the pan.