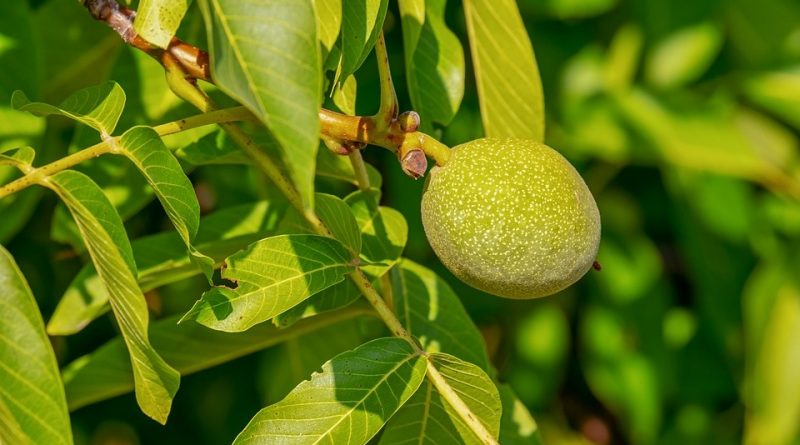 The common walnut or even white walnut (Juglans regia L., 1753), is a large tree species belonging to the Juglandaceae family.

Systematics –
From the systematic point of view it belongs to the Eukaryota Domain, Kingdom Plantae, Subarranean Tracheobionta, Spermatophyta Superdivision, Magnoliophyta Division, Magnoliopsida Class, Subclass Hamamelididae, Juglandales Order, Juglandaceae Family and then to the Genus Juglans and to the Species J. Regia.

Etymology –
The term Juglans comes from Iupiter, Jupiter and from glans, acorns, that is, acorns of Jupiter. The specific epithet directed derives instead from rex, régis, king, that is regal, worthy of a King by color, bearing, dimensions or other characteristics.

Geographic Distribution and Habitat –
Juglans regia is a species with Asian origins (slopes of the Himalayas) and introduced in Europe in ancient times, between the seventh and fifth centuries BC, for its edible fruit. The plant is widespread throughout the world and in Italy the cultivation of nut fruit, usually promiscuous, has a certain relevance only in Campania. The introduction to America was operated in the seventeenth century by English settlers.
Its original spread in the wild is relatively limited; this is between the southern Balkan Peninsula and Central Asia. Spontaneous woods of mixed nuts with maples are found, for example, in the mountains of Uzbekistan. 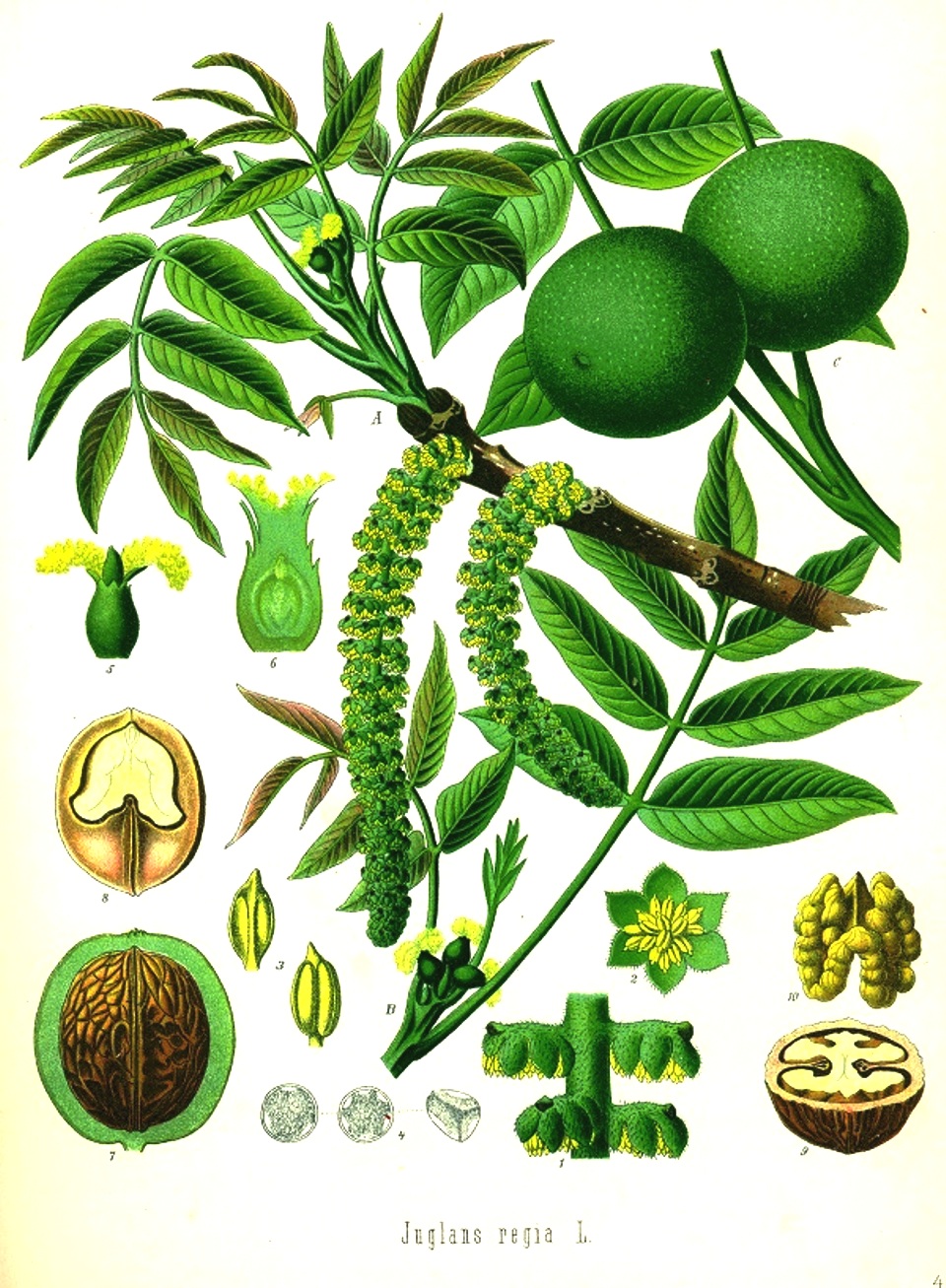 Description –
The nut is a tree of great vigor and is characterized by a solid trunk, tall, straight and with a majestic posture. The roots are robust, initially fictitious and with expanded maturity and very superficial. The plant can reach 30 meters in height and is very long-lived becoming centuries-old. It is deciduous and with large, light green leaves, composed and alternate. It is a monoecious with male flowers gathered in pendulous catkins, 10-15 cm long, with numerous stamens, which appear on the branches of the previous year before the appearance of the leaves. The female unisexual flowers hatch from mixed buds after the masculine ones (proterandrìa); these are solitary or gathered in groups of 2-3, rarely 4, appear on the new shoots of the year, at the same time as the leaves.
The fruit of the walnut tree is a drupe, composed of the fleshy, fibrous exocarp (mallo), which blackens when ripe and frees the woody endocarp, ie the seed, the real walnut, consisting of two valves that enclose the kernel that has a high lipid content. The anthesis is in April and maturation occurs in the period from September to October.

Cultivation –
The common walnut is a plant that tolerates weakly acidic and calcareous soils well. It is an easily cultivated plant, but the soil on which it is grown must be rich in organic substance and sensitive to water stagnation and water stress resulting from loose soil; does not tolerate heavy, asphyxiated soils, while it also withstands high limestone content.
Particular attention should be paid to the water supply in June, because, in case of lack of water, the fruits will be small. Drought or late frosts at this time would jeopardize the harvest of the following year. The cultivated trees are grafted and begin to produce in the fifth-sixth year and enter full production from the 25th year to 70 years.
The nut produces with the roots the juglone which, due to allelopathy, is toxic to other plant species and does not allow its growth in its vicinity. For the cultivation technique, the following sheet can be consulted.

Uses and Traditions –
The Juglans regia is also called with the terms common walnut or real walnut and the fruit (seed) is called walnut. The nations that boast a cultivation tradition of Juglans regia are France, Greece, Bulgaria, Serbia and Romania in Europe; China in Asia; California in North America and Chile in Latin America. Lately it has also been introduced in New Zealand and in the southeastern part of Australia.
In Italy it is cultivated above all in Campania, which produces over 80% of the national fruit production. It can become spontaneous in damp and rocky places. Sometimes young plants meet in downy oak woods, but they do not have a following.
Archaeological finds indicate that walnut fruits were used as food already 9000 years ago. The first written records date back to Pliny the Elder and Columella. Pliny’s reports, in his Naturalis historia, testify to the importation of walnut into Europe from Asia Minor, by Greek settlers between the seventh and fifth centuries BC
There is evidence of the presence of walnut in Europe since the Tertiary era. Following the glaciation, some specimens managed to arrive in the Mediterranean basin. Therefore, the walnut areal in the Quaternary age extended from the Balkan peninsula to Central Asia. Even today there are some characteristic pure walnut woods in Kyrgyzstan, on the Tien Shan mountain range.
In the past, walnut was used in the treatment of chronic eczema, uric arthritis. Currently, its leaves, taken orally, via decoctions or herbal teas, are still considered useful in diseases of the exchange, such as diabetes, gout, and obesity; the plant promotes diuresis, stimulates liver function and is useful in rheumatic affections and rickets. Also for external use it can be used against inflammation of the female genital tract; the leaves decoction compresses are effective against conjunctivitis, dermatosis. In addition, walnut husk oil plays a protective role against sunlight, due to the presence of the juglone.

Preparation Mode –
The walnuts find ample space in human food and are predominantly consumed as dried fruit. Through crushing, pressing and pressing techniques, we obtain walnut oil, which is used both for food use and as a drying oil in oil painting. Unfortunately, food use has a strong limitation due to its rapid tendency to go rancid, in addition walnut oil has a high price and production is often only intended for small artisanal workshops.
From the walnut husk, not completely ripe, we obtain the production of nocino, an increasing diffusion liquor in Europe. Finally, both the leaves and the sprouts are used for the production of walnut wine, making them macerate in alcohol as the base of the wine. For this use, still niche, it is required the collection of very young fruits (end of June).