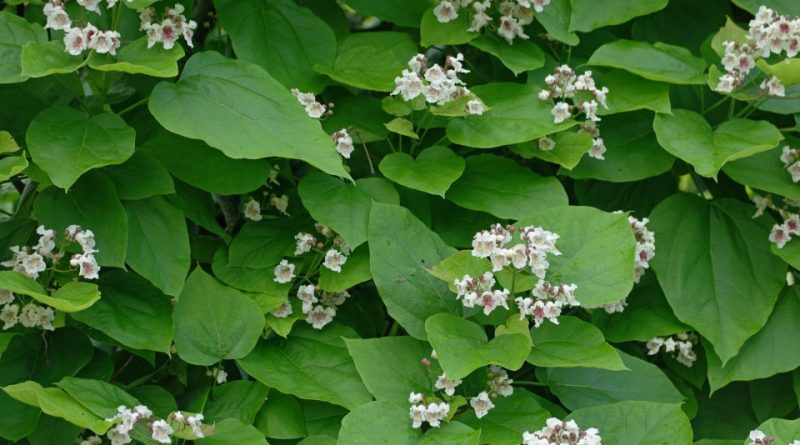 The Catalpa or Cigar Tree (Catalpa bignoniodies Walter) is an arboreal species belonging to the Bignoniaceae family.

Etymology –
The term Catalpa derives from kutuhlpa, term Muscogee (indigenous population of Carolina) for this tree which means winged head. The names Catalpa and Catalpah were used by Mark Catesby between 1729 and 1732, while Carlo Linneo classified it as Catalpa Bignonia in 1753. Giovanni Antonio Scopoli established the genre Catalpa, later in 1777. The specific epithet bignonioides comes from Bignonia and Greek εἷδος eidos, appearance, ie similar to the Bignonia.

Geographic Distribution and Habitat –
Catalpa bignoniodies is an arboreal species native to the central-southern and eastern United States, where it is found in broad-leaved woods and in temperate-warm climate zones. It was introduced in Europe in the first half of the eighteenth century for ornamental purposes and in some cases it escaped cultivation and became naturalized. 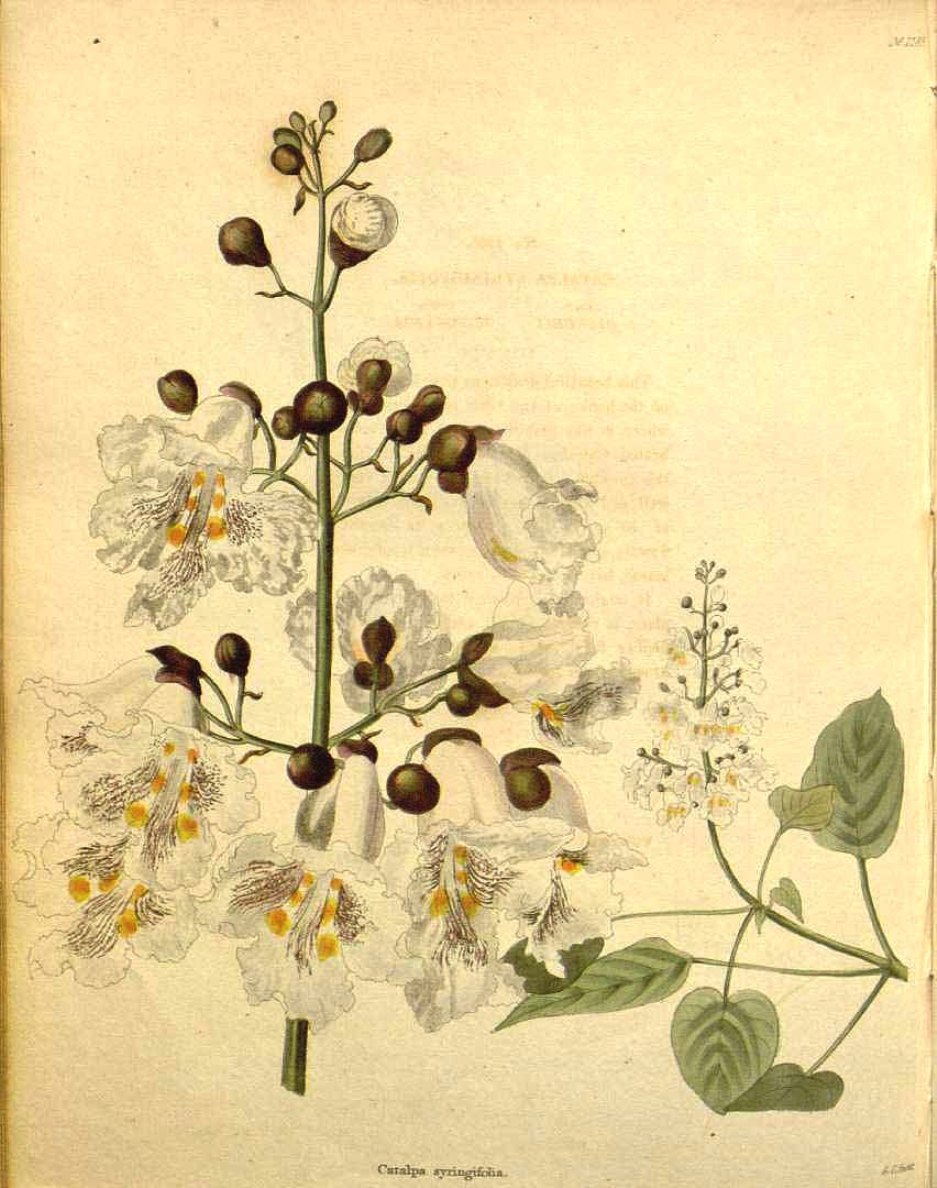 Description –
The tree of cigars is a plant that can reach 15 meters and has an ovoid head with a straight or slightly twisted trunk, with gray-brown rind, very wrinkled and cracked in plaques. The leaves are deciduous, petiolate, with a large ovate-sharpened lamina, sometimes provided with one tooth per side in the upper half. The flowers are campanulate-funnel-shaped, 5 cm long with a fragrant white corolla, red and yellow spotted and worn in pyramidal panicles 15-20 cm long. The fruits are linear septicidal capsules, long, up to 40 cm long and 1 cm broad, first green and then brownish-black, which remain hanging from the plant until late winter; inside we find numerous brownish seeds. The antesis occurs in the late spring period.

Cultivation –
Catalpa bignoniodies is a plant that prefers bright and sunny positions, but develops without problems even in the shade or in the complete shade; it is a plant that is resistant to the cold so much that it usually bears even the most stiff or windy winters. As for cultivation, the planting should be done between October and November or March-April (if in pot), while pruning should be done between February and April, before the plant enters the vegetation.
As far as irrigation is concerned, the cigar tree does not need too abundant supplies, without affecting short periods of drought without problems; in general these plants are content with rains and occasional watering, but it is good to provide water during periods of prolonged drought during the spring and summer months; these plants can also develop in very humid gardens, provided they have well-drained soil. At the beginning of spring and early autumn it is good to provide the plant with a well-mature organic fertilizer.
The multiplication of the plant occurs by seed in spring; always in spring it is possible to practice cuttings, using semi-woody branch portions.

Uses and Traditions –
Catalpa bignoniodies is often used in parks, gardens and road trees, due to the large and showy inflorescences, the expanded foliage and the characteristic long fruits, hence the vulgar name of “tree of cigars”. It grows subspontaneous in ruderal environments and along the roads.
Of this species we have the cultivar C. bignonioides ‘Aurea’ which has yellow leaves.

Preparation Mode –
Catalpa bignoniodies, as well as for ornamental and ecological purposes, has no other alimentary or therapeutic uses.