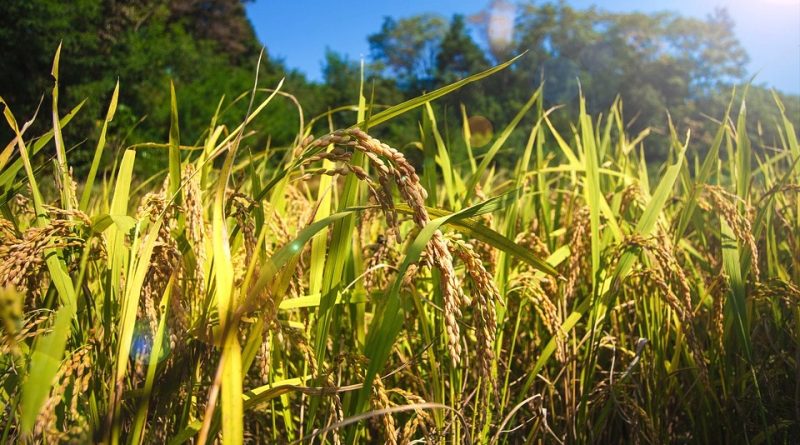 Systematics –
From a systematic point of view it belongs to the Eukaryota Domain, Kingdom Plantae, Magnoliophyta Division, Liliopsida Class, Poales Order, Poaceae Family, Subfamily Ehrhartoideae, Oryzae Tribe and then to the Oryza Genus and to the O. Sativa Species.

Etymology –
The generic term Oryza comes from ὄρυζα óryza, which was the Greek name for rice. The specific sativa epithet derives from satum (past participle of sero sowing, planting) sown, planted: that is of plant that is sown or cultivated, domestic.

Geographic Distribution and Habitat –
The Oryza sativa is a plant of ancient cultivation, native of Southeast Asia with a tropical and subtropical climate. The origins of rice cultivation are not certain, it is believed that the most ancient varieties appeared more than fifteen thousand years ago along the slopes of the Himalayas. It is one of the most cultivated food species in the world with over 550 million tons on more than 150 million hectares, mainly in the hot and very humid regions of the tropical and subtropical areas, where the other cereals do not thrive. In Italy it is cultivated mainly in the provinces of Vercelli, Pavia, Novara, Milan, which alone group just under 90% of the total area invested in rice; other provincial provinces are Mantova, Verona, Rovigo and Ferrara. Small areas cultivated with rice are also found in central Italy (Siena, Grosseto) and in the islands (Sardinia and Sicily). 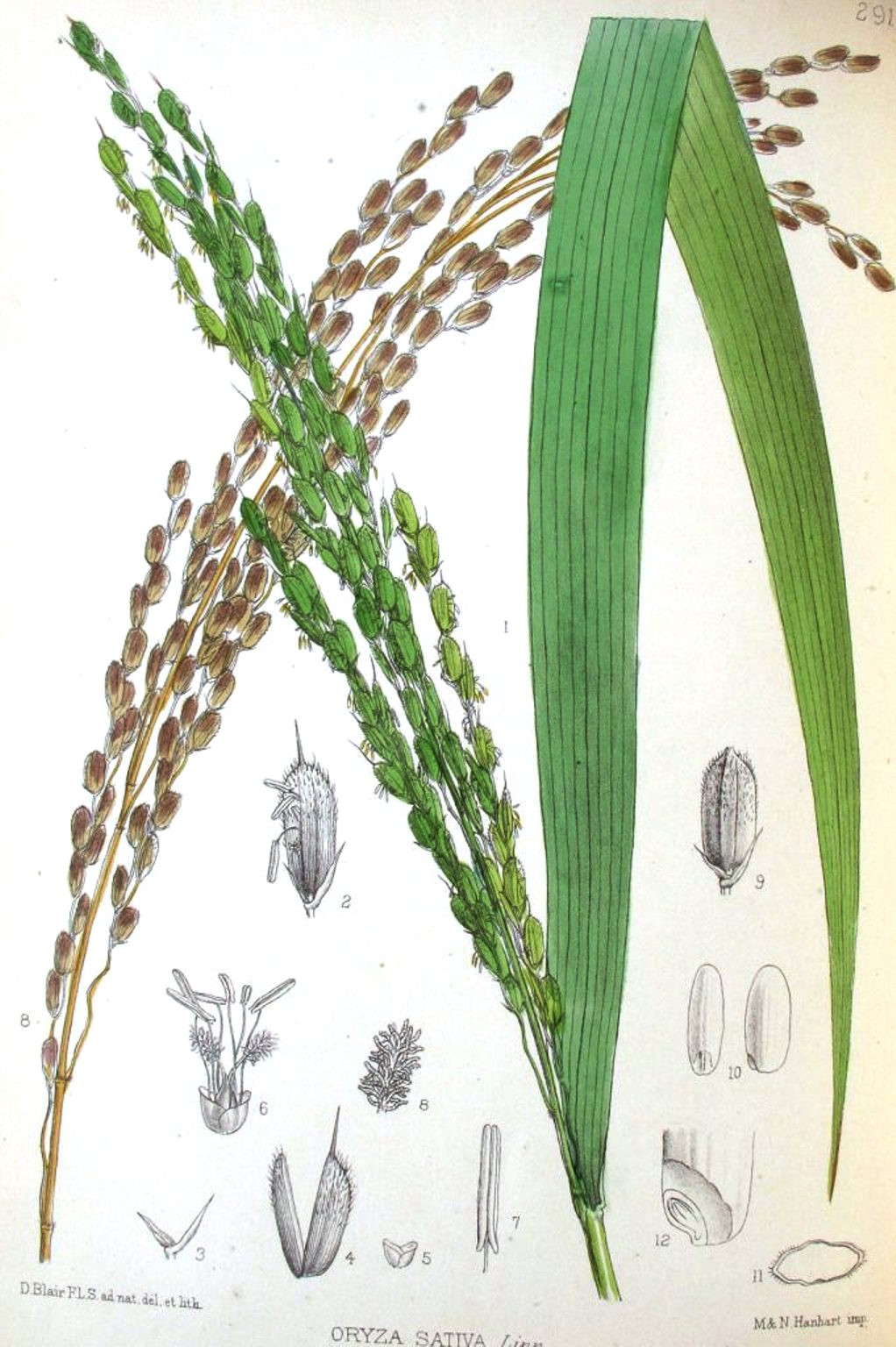 Description –
Rice is an herbaceous species with a root system consisting of embryonic roots and adventitious roots, more vigorous than embryonic ones. In the adventitious roots no longer young appear “aerated vessels”, which ensure the aeration of the roots even in the submerged environment in which the rice lives. The culm is characterized by hollow internodes and full knots as in wheat. The leaves, which are in different numbers according to the variety, but usually 5-7 per culm, consist of a sheath and a lamina, rough due to the presence of short and hard hairs. The ligule is long and the hairy auricles.
The inflorescence of the rice is a branched terminal panicle that brings unifying spikelets, formed of glumes much smaller than the glumellas, which last ones are very developed, superimposed on the margins, flattened and enclosing the kernels like a case. The lower jumble can be mutated or briefly apisted. The flowers are hermaphroditic and comprise a uniovular gynoecium, with bifid stylus and feathery stigma and a six-stamed rambler.
The fruit is a kernels always dressed (so-called paddy), compressed on the sides, oblong, with a white or pigmented pericarp. Fertilization is strictly autogamous.

Cultivation –
The Oryza sativa is a very demanding plant in terms of heat and water, but its most peculiar ecological feature is to tolerate the water saturation of the soil so that, although it is not an aquatic plant, it is adapted to tropical and subtropical wetlands. subject to submersion. The cultivation temperatures must be quite constant, with minimum vital temperatures of 12 ° C for germination, while the rising and flowering take place optimally at 23-25 ​​° C. for the cultivation technique the following sheet can be consulted.

Uses and Traditions –
Oryza sativa is a very rich species of forms; according to the most recent and well-established classification, the cultivated forms can be ascribed to two subspecies:
– Oryza sativa subsp. Indicate;
– Oryza sativa subsp. japonica.
The rice of the type indicates are those most sensitive to the photoperiod (are brevidiurni) and therefore suitable for tropical climates (they are widespread between 0 ° and 25 ° latitude), with long cycle, rustic but subject to lodging and with grain is long and narrow, flattened, resistant to cooking and not gluing. The rice of the japonica type, which are more common in temperate zones, are not very sensitive to the photoperiod, with lower thermal requirements but greater nutritional requirements; straw is quite short and sturdy, productivity is high and have a short, stocky grain, hardly resistant to cooking and tending to stick.
We recall that almost all the rice grown in the world belongs to the Oryza sativa species; only in Africa is the Oryza glaberrima cultivated but in a more limited way.
Today rice is one of the main food resources of humanity, of which more than half use it as a basis for its diet.
On the origins of cultivation, the first certain data tell us that he was born in China towards the 6th millennium BC. as evidenced by several Neolithic sites in eastern China. It then spread to Mesopotamia, Persia, Egypt and finally to Europe.
In the gastronomic field, with the term rice the caryopsis of the Oryza sativa plant is indicated.
Rice, among all cereals, is the most complete food: 100 g provide about 330 kilocalories with a considerable content of fiber and vitamins, as well as various mineral salts. It also has a higher digestibility than other cereals. Contains essential fatty acids: linoleic acid between 29-42%, and linolenic acid between 0.8-1%. The sodium / potassium ratio is 5 mg sodium per 100 rice, and 9 mg potassium. The rice is gluten-free and therefore it is a precious and useful food in the diets of celiac subjects and with food allergies.

Preparation Mode –
The rice, in addition to being widely used as a main course, in the form of boiled salted rice, lends itself to the preparation of more elaborate salty dishes such as risotto but also desserts such as resolved or rice pudding and the cake of decorations.
But rice is also used in other uses such as puffed rice and according to the type of preliminary processing it is subjected to; in fact, starting from the raw material that is the paddy rice, or dressed rice, this is subjected to the various stages of processing before becoming bright rice. The brown rice does not undergo the refining and bleaching process and that is why it maintains almost unaltered the nutritional properties and is mainly used for boiled and soups.
It is impossible today to enumerate all the possible food uses of rice that depend not only on the cultivated varieties but also on the gastronomic and traditional specifications of the various local cuisines.