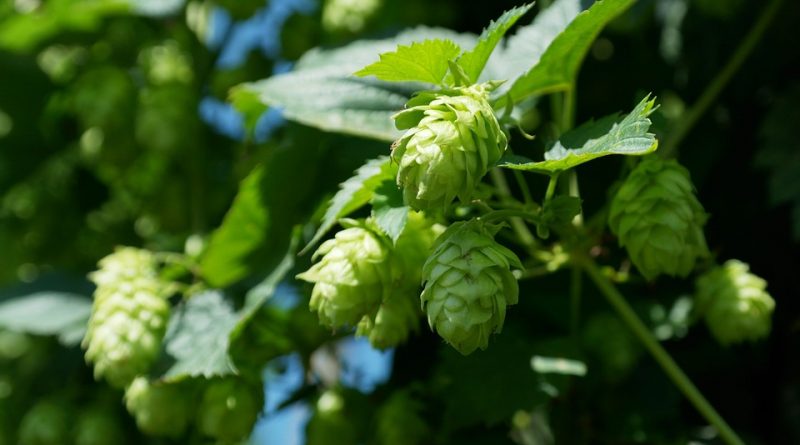 Systematics –
From the systematic point of view it belongs to the Eukaryota Domain, Kingdom Plantae, Magnoliophyta Division, Magnoliopsida Class, Order Urticales, Family Cannabaceae and therefore to the Genus Humulus and to the Specie H. lupulus.

Geographic Distribution and Habitat –
The hops is a plant that prefers fresh environments and fertile and well worked soils and that nevertheless grows spontaneously on the banks of the waterways, along the hedges, at the edge of the woods. We find it from sea level up to 1,200 meters if the climate is not too windy and humid. It is quite common in northern Italy; wild hops are also present in all regions, including islands, although they become progressively more rare to the south. 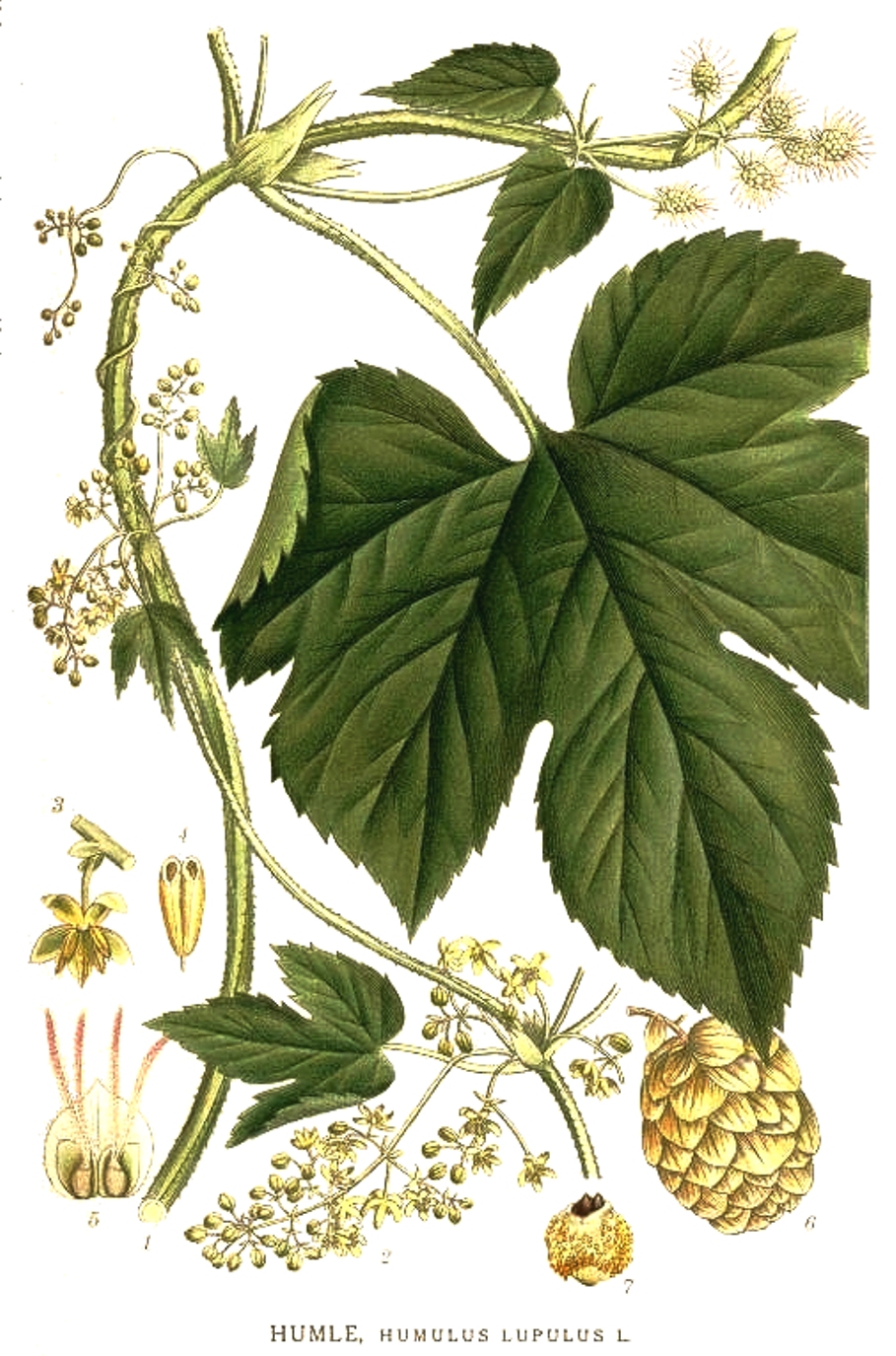 Description –
Humulus lupulus is a perennial, deciduous and deciduous herbaceous plant which has a branched rhizome from which thin climbing creeks extend up to 9-10 m in length. It has heart-shaped, petiolate, opposite leaves, with 3-5 serrated lobes. The upper part is rough to the touch due to the presence of numerous hairs, while the lower part is resinous. It is a dioecious species, with male and female, unisexual and greenish flowers, on separate individuals. The male flowers are gathered in pendulous panicles and each has 5 tepals fused at the base and 5 stamens; the female flowers have a membranous cone surrounding an ovary with two long hairy stigmas; these are grouped in the axils of leafy bracts, constituting an inflorescence with a characteristic and unmistakable cone shape. The antesis takes place during the summer; the pollination is anemophilous and in the period of September-October, with the maturation of the seeds, the bracts assume a paper consistency that increases the size of the cone. The fruits are ash-gray achenes.
The plant can live from 10 to 20 years.

Cultivation –
The hops is a plant cultivated for commercial purposes in both hemispheres, roughly between 30 ° and 52 ° latitude, and being very resistant to cold climates can withstand up to -30 ° C. The cultivation of hops only began during the ninth century AD in Germany. Previously, since prehistoric times, hops were already used but not cultivated. For its cultivation technique, the following sheet can be consulted.

Uses and Traditions –
Humulus lupulus is a species that contains several substances and in particular the “lupulin”, particularly present in the female inflorescences that are rich in resinous glands secreting this yellowish substance and with a bitter taste; this is composed of α-acids (umulone, adumulone and coumulone), β-acids (lupulone, adlupulone and colupulone), polyphenols (eg flobafeni, xanthumol) and numerous essential oils, which are used to flavor and confer to beer the its characteristic taste.
The female flowers (cones) should be collected in September when they are not yet completely ripe, or from the powder that is obtained by slamming and sifting the cones.
Lupulin has a tonic, calming, depressing and slightly narcotic action on the body. From the infusion of hop cones, a tonic and aperitif drink is obtained which, reawakening the appetite, completes the laborious digestions, especially of convalescents, lymphatics and scrofulous. also by filling the cushions of well-dried hop cones, insomnia and night-time restlessness are fought. Calming of the nerves are also the warm baths in which one kilogram of hop cones has been introduced.
Hops are used mainly in the brewing process; the primary features are:
– Provide, in almost all cases, a bitter base to balance the sweetness of the fermentable material (barley malt, wheat malt, etc);
– Increase microbiological stability;
– To contribute to the stabilization of the foam;
– Influence, depending on the styles in a minor or greater way, taste and aroma.
Currently there are 5 taxonomic varieties recognized in the genus Humulus and are: lupulus – European hops; cordifolius – Japanese hops; lupuloides, neomexicanus, pubescens – North American hops.
Hops contain 8-prenylnaringenin, the most potent phytoestrogen known, whose concentration in humulus lupus is so poor that it can not have biological effects that can be investigated with current laboratory techniques. However, this compound is formed also following the conversion in situ, and in vitro of isoxantoumulone, of which the hops is much richer. The pharmacological effects of such compounds may be estrogen-like.

Preparation Mode –
Hops are used in the kitchen as well as in the brewing and pharmacological industry. In the kitchen the apices of the hop plant are collected in the period of March-May and used as the best known asparagus. Unlike most sprouts used for culinary use, wild hops are tastier when they are larger. Once boiled for 5-10 minutes, with little water or steamed, you can consume directly with classic “all’Agro” seasoning, or skip a few minutes in the pan to serve them with rice or use for risotto, omelettes and soups.
These sprouts are both cooked and raw, an excellent salad with laxative effects, blood purifiers and liver functions.
With the hop cones you also get an excellent “tranquilizer” wine: for its preparation it is sufficient to put a handful of it in a liter of white wine, let it macerate for a few days, pour carefully and drink a few glasses if necessary. The hop cones are collected during the period of September, when they have reached full maturation; they should be dried in the sun and stored in the air in hermetically sealed containers in the dark.
An infusion can also be prepared; for its preparation it is sufficient to pour two cups of boiling water on fifteen grams of hop cones; it is left to rest for twenty minutes, it is poured and sipped before and after meals. This infusion is also indicated, in the dose of a cup taken before bedtime, to relax the nerves and promote a peaceful sleep.