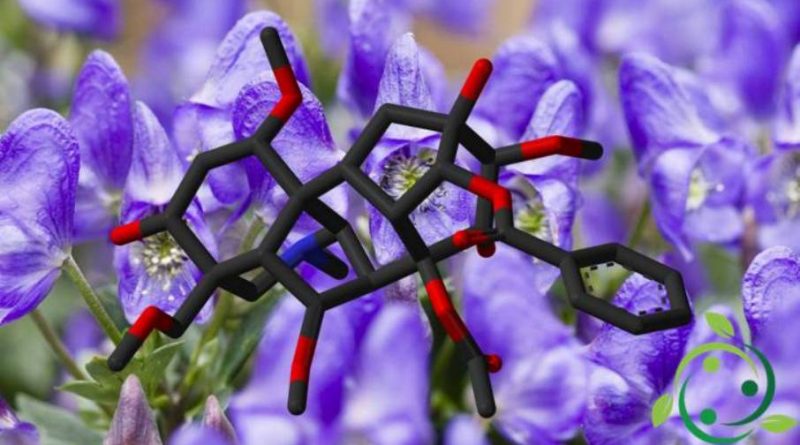 Aconitine is a diterpenoid alkaloid (pseudoalkaloid since it is not derived from amino acids) with brute or molecular formula C34H47NO11. Chemically it is a diester of aconine with acetic and benzoic acids. It derives from the cyclization of geranilgeranil pyrophosphate (GGPP) which after successive modifications becomes atisin to which a 2-aminoethanolic unit is incorporated.
This alkaloid is found, in nature, in some species of the Ranunculaceae family belonging to the genus Aconitum.
Aconitin is a poison and is, after nepaline, the second most active plant-based poison in the world.
The species that contains a greater quantity of aconitin is the Aconite napello (Aconitum napellus L., 1753) in which it has been found in every part of the plant, even if the organ that contains the largest amount of aconitin are the tubers. Although this plant does not only contain this alkaloid, aconitin is its greatest concentration.
Even today the steps of secondary metabolism leading to the formation of the aconitin are not completely clear. The mechanism of functioning of the aconitin is comparable to that of the neurotoxins; in fact it acts on the sodium channels by activating them. Aconitine can be absorbed either by ingestion or by contact.
The aconitin extracted from the roots of the Asocita was used in India to execute capital punishments, while during the Second World War they were in possession of the spies who had to kill themselves in case of capture. The historical documentation tells us that in the sixteenth century in Rome and Prague, the condemned to death acted in the experiments to discover an antidote.

In Chinese medicine it is still considered to be endowed with effective anticongestion and antitussive activity (a particular preparation is followed by cooking the roots for 6-8 hours, so that by means of hydrolytic processes a decrease in toxicity is determined).
At the metabolic level, aconitin is rapidly absorbed after oral ingestion or even by dermal contact. Ingesting 3 grams of fresh drugs can lead to death in a few hours. Aconite alkaloids act mainly on the heart, the central and peripheral nervous system. Aconite, a remedy used for many diseases especially in oriental medicine, taken in doses higher than the therapeutic ones causes poisoning in proportion to the amount administered.
The effects of aconitin intoxication are very rapid. After a latency period of 10 to 90 minutes after ingestion of the first symptoms, the patient develops a combination of cardiovascular disease: palpitations, difficulty breathing, hypotension, bradycardia, tachycardia, ventricular arrhythmia, pulmonary edema; gastrointestinal: nausea, abdominal pain, diarrhea; in addition to sensory and motor disturbances, typical of aconitin poisoning.
The symptoms begin with an immediate appearance of itching and tingling that extends from the mouth to the entire face and then from the fingertips progresses along the limbs with a tendency to extend to the whole body until complete anesthesia. It proceeds with the obtundation of sensory organs sensitivity, in particular sight and hearing, then symptoms of respiratory difficulty, bradycardia, weak pulse, hypotension appear. The patient first perceives widespread heat, then intense internal heat and then takes over the high fever, dry skin and mucous: seldom appears a hot and profuse sweating, which usually represents overcoming the crisis. The skin may be covered by a milestone eruption accompanied by severe itching. Pulse and breathing accelerate and the patient is pervaded by great psychomotor agitation.