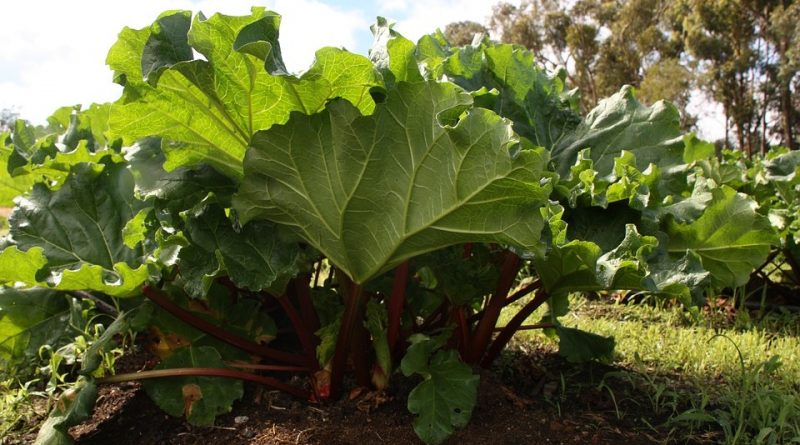 The Chinese rhubarb or Mongolian rhubarb (Rheum palmatum L., 1759) is a perennial herbaceous species of the Polygonaceae family.

Etymology –
The term Rheum derives from rheu root; for antonomasia rheu barbarum root of the barbarians, from which rhubarb. The specific epithet palmatum comes from pálma palma, due to the shape of the leaves that recalls the palm of the hand.

Geographic Distribution and Habitat –
Rheum palmatum is a perennial herbaceous species with origins in the regions of western China, northern Tibet and the plateau in central Asia; in Italy it is cultivated for ornamental or medicinal purposes. 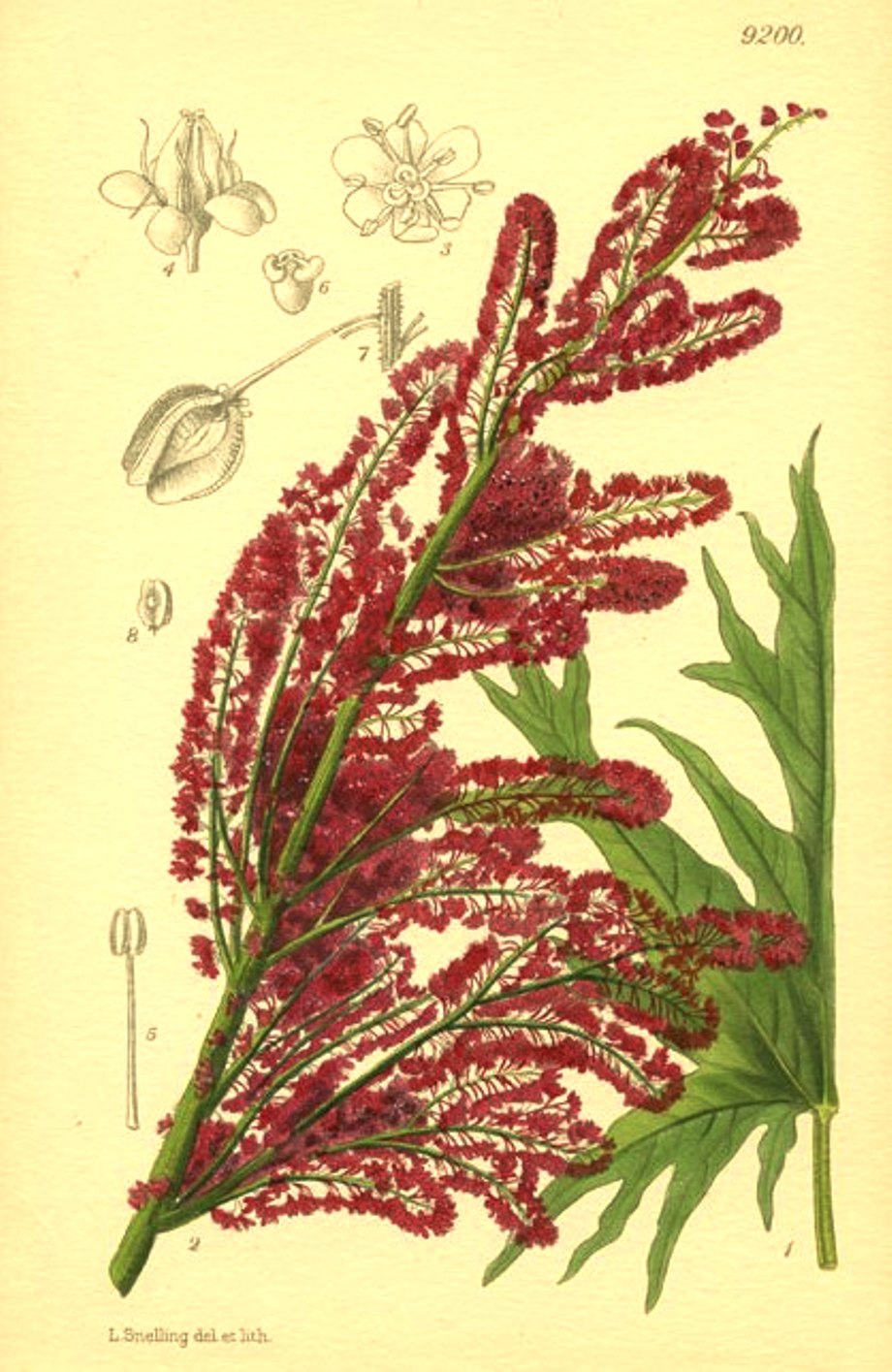 Description –
The Chinese rhubarb is characterized by very large leaves, with a long fleshy petiole, engraved in 5-6 main lobes; the ribs, very evident on the lower part of the leaf, are often reddish in color. The inflorescence is a large panicle with white-yellowish flowers, green or purple. The fruit is a walnut. It has strong rhizomatous roots and upright stalks up to 2 meters high; the rhizome is red-brown.

Cultivation –
Rheum palmatum is a plant cultivated in various parts of the world and also in Italy. For its cultivation, before the plant is used to make a deep processing, with distribution of manure or other organic substances in the autumn period. The seedlings produced in seedbeds or the rhizome sections with buds are planted in autumn or early spring at 1.5-2 m between rows and 1 meter along the row. Cultivation is based on weeding for the removal of weeds and irrigation. Harvesting begins in the second year, by removing the leaf petioles from the flap by hand. Usually one third of the leaves present are left on the plants. The rhizomes, on the other hand, can be harvested at 3-4 years, cleaned from the earth, cut into slices and left to dry. The fleshy petioles are used for the preparation of sweets and jams.

Uses and Traditions –
Although the Chinese rhubarb originates from the regions of western China, northern Tibet and the Mongolian plateau, this plant was widely cultivated and used in other parts of the world, such as Europe, for hundreds of years before its origin was discovered in the eighteenth century. The rhizomes of this plant have digestive, astringent, laxative, depurative, and cholagogue properties.
The first reports of the use of Rhubarb are found in the ancient Chinese writings, dating back to 2700 BC. A study of Chinese history shows that it was known, even then, for its purifying effects and for its ability to reduce feverish conditions. Documents show that he was taken by an emperor in the Liang dynasty (557-579) for fever, used as a gift to an emperor of the Tang Dynasty (618-907), used to fight the plague in the years when the Song dynasty ruled (960 -1127), and used to commit suicide by a general of the Ming Dynasty (1368-1644).
In ancient China, rhubarb root was used as a means to treat diseases of the stomach and as a cathartic, against severe constipation, as well as its use as its use in compresses for fevers and edema.
Although the root of Rheum palmatum plays an important role in herbal medicine, its leaves may be poisonous if consumed in high enough quantities. The oxalic acid crystals found in the leaves can cause serious health problems.
Patients with arthritis, kidney problems, intestinal inflammatory diseases or intestinal obstruction should refrain from consuming. In addition, pregnant women should avoid any intake because rhubarb can cause uterine stimulation. If taken for a prolonged period of time, the adverse effects may be: hypertrophy of the liver, thyroid and stomach, as well as nausea, fatigue, abdominal pain, vomiting and diarrhea.
With its particular medicinal properties, it was not long before this plant began to be spread and cultivated in other parts of the world, soon becoming one of the commodities of exchange along the Silk Road. We arrived at the creation of the rhubarb monopoly, which began in Imperial Russia in 1731, which strictly regulated its trade from China through the Asian steppes in Moscow and St. Petersburg, where its root was then sent to the rest of Europe. For the next 125 years the Chinese Rhubarb imports were governed exclusively by the so-called “rhubarb office”. Office that ceased to exist when China opened its ports to Western nations, allowing free trade.
Around the world there are various “rhubarb festivals”, such as in the United States, Canada, England and Australia. These “rallies” attract both travelers and “rhubarb lovers” from all over the world. In this regard, it is recalled that the first international rhubarb symposium was held in China in 1990, with the aim of verifying the scientific data and the use of Chinese rhubarb used by Chinese pharmacopoeias.

Preparation Mode –
This plant, also cultivated as an olive, can be used in the kitchen for many other tasty and quick cooking preparations. The Chinese rhubarb in fact, lends itself to be used in appetizers, in the first, second courses and even in desserts. In fact, the Anglo-Saxon kitchen uses this plant to enrich the flavor of fruit preserves, cakes and other sweet recipes.