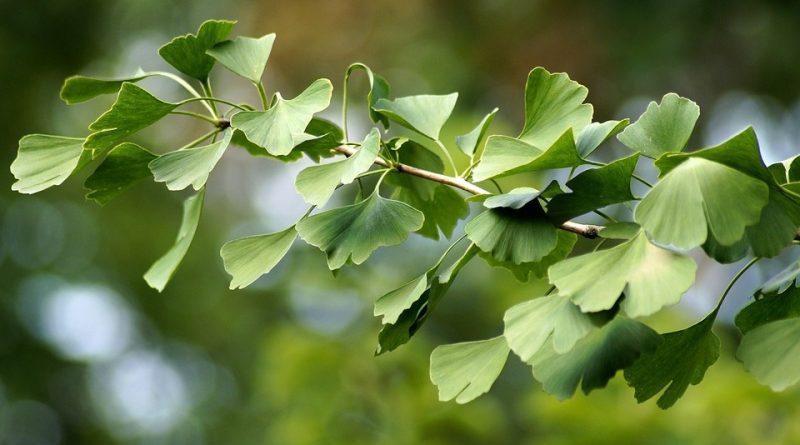 Ginko or Ginco or maidenhair tree (Ginkgo biloba (L., 1771)) is the only surviving species of the Ginkgoaceae family.

Systematics –
From a systematic point of view it belongs to the Eukaryota Domain, Kingdom Plantae, Ginkgophyta Division, Ginkgoopsida Class, Ginkgoales Order, Ginkgoaceae Family and then to Ginkgo Genus and G. biloba Species.
The terms Salisburia adiantifolia Smith, 1797 and Pterophyllus salisburiensis Nelson, 1866 are synonymous.

Etymology –
The term Ginkgo comes from ginkyo, the Japanese name of this plant which means apricot (kyo) of silver (gin). A trivial transcription error, of the German botanist Engelbert Kaempfer, has transformed the original name into this almost unpronounceable, but still valid and not modifiable. The specific epithet derives from bis, twice and lobus, lobe: with two lobes, bilobed.

Geographic Distribution and Habitat –
Ginkgo biloba is an ancient tree species whose origins date back to about 250 million years ago in the Permian; for this reason it is a relict species considered a living fossil.
The plant would seem to originate from China, a country in which fossils were found that date back to the Paleozoic era. Recently at least two relict stations have been discovered in the Zhejiang province of eastern China but not all botanists believe that these stations are really spontaneous, as Ginkgo biloba has been extensively cultivated for millennia by Chinese monks. 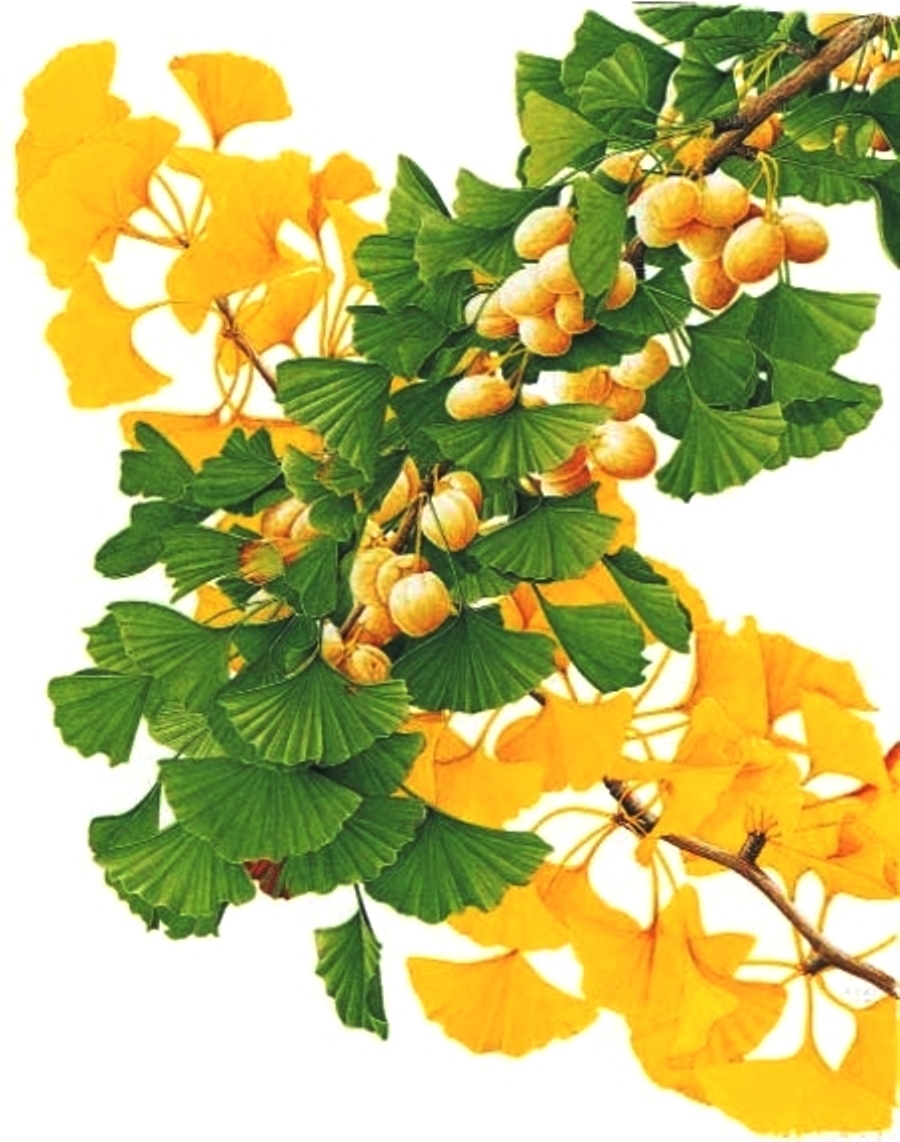 Description –
The Ginkgo biloba is an arboreal species that can reach 40 m in height and, in optimal conditions, large circumferences of the trunk (fine to 8 meters). The crown is pyramidal, sparse at a young age that thickens to maturity. The bark is smooth when young and silver-gray in color and then takes on a dark brown color; it also has evident suberose ribs.
Macroblasts can be distinguished which are initially orange green and which subsequently tend to the silver gray of the bark; Brachiblasts have a claviform form with leaf scars and an apical bud. The leaves have a typical flabelliforme (fan-like) shape, green or yellow at the time of the abscission. Macroblast leaves are distinguished, sparse alternate flows with often margined bilobed upper margin, and brachiblastal leaves gathered in tufts and with whole and wavy margin. The species is dioecious, with the “catkins” brought by the male plants and the ova, gathered in pairs by a peduncle, brought by the female plants. The plant reaches sexual maturity around 30-40 years and pollination, which is anemophilous, occurs in spring. Fertilization is delayed for 4-6 months, one ovum aborts and the other falls unripe. The seed finishes maturing on the ground and germinates in the following spring.

Cultivation –
Ginkgo biloba is a heliophilous plant that therefore prefers sunny areas and a cool climate. Although fairly rustic, it prefers acid and non-asphyxiated soils. The plant supports temperatures up to -35 ° C. It is generally multiplied by air layering. In the ornamental use it is preferable to cultivate the male individuals to avoid the unpleasant smell of the seeds, which falling on the ground disintegrate and cause a bad smell because of the carboxylic acids they contain, even if the sex of the species is hardly recognizable as the plant does not have sufficient sexual dimorphism before sexual maturity. For cultivation we resort to male individuals obtained agamically by grafting. It is a plant that does not tolerate pruning well as the shortened branches dry out.

Uses and Traditions –
Ginkgo biloba has been cultivated since ancient times both in Japan and in China because it was considered a sacred plant. In the Far East the seeds of this plant are considered a delicacy and are eaten after being roasted. The plant was introduced in Europe in 1700 but is of no particular forest interest due to its rather fragile wood. The first plant introduced in Italy, in 1750, is located in the Botanical Garden of Padua (UNESCO World Heritage Site). This is a majestic male specimen on which, in the mid-nineteenth century, a female branch was grafted for educational purposes.
The wood, yellowish, is used for the construction of furniture, lathe and carving, but is of low quality given its fragility.
Today, Ginkgo biloba is used, therefore, above all as an ornamental plant and as a road plant because it is a plant very resistant to climatic adversity, pollution and pests; it is also cultivated for industrial purposes in Europe, Japan, Korea and the United States for the medicinal use of its leaves.
Its use to make bonsai is also widespread.
Ginko biloba holds a number of interesting phytotherapeutic potentials. The compounds believed to be responsible for the therapeutic action are:
– the Bilobalide trilactone terpene, which represents 2.6-3.4% of the dry weight;
– Gingkolides A, B and C (representing a total of 3-3.6% of the dry weight):
– Ginkgolides J and K (0.3-0.6%) and M, Q, P (present in smaller quantities).
There are carboxylic acids called Ginkolici Acids, which however may have toxic effects and are therefore present in low concentrations in the extracts (5-10 ppm). Other carboxylic acids present in the plant are Ginkolo and Shikimico acid. Among the other bioactive molecules present in low concentrations we find:
– Procyanidin (up to 10% of dry weight);
– Quercetin and Isoramnetine (in the form of glycosides);
– flavonoids and Kaempferol.

Preparation Mode –
From the Gingo biloba you can obtain a series of extracts that must however be used with caution in patients taking anticoagulants, acetylsalicylic acid, ticlopidine, thiazide diuretics, pentoxifylline, thrombolytics, caffeine, ergotamine; do not associate with garlic products or willow derivatives to increase the risk of gastritis.
The extracts of this plant have been tested for a great number of pathologies and some of them have obtained remarkable results of therapeutic efficacy. The main findings were obtained for the treatment of cognitive decline, of intermittent claudication, in the treatment of some disorders with vascular origins and metabolic syndromes.