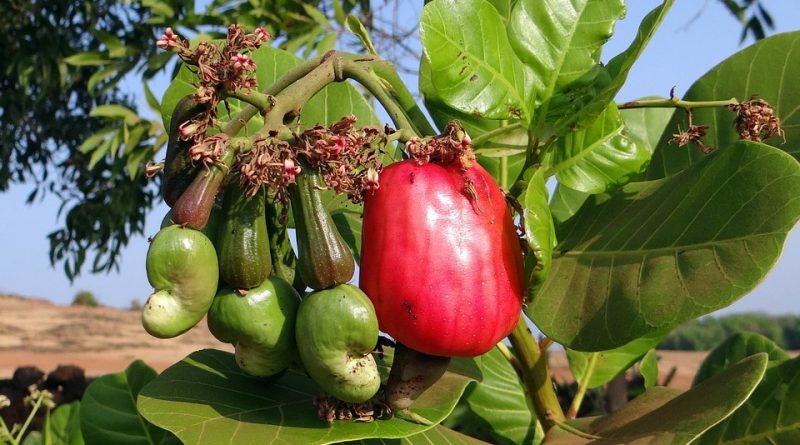 The cashew (Anacardium occidentale L., 1753) is an arboreal species belonging to the family of the Anacardiaceae.

Systematics –
From the systematic point of view it belongs to the Eukaryota Domain, Kingdom Plantae, Magnoliophyta Division, Magnoliopsida Class, Sapindales Order, Family Anacardiaceae and therefore to the Genus Anacardium and to the Western A. Species.

Etymology –
The term Anacardium derives from the Greek prefix ανα- ana- at the top and from καρδία kardía cuore: the name used by pharmacists in the sixteenth century for the fruit of Semecarpus anacardium and recovered from Linnaeus. The specific Western epithet derives from the Latin occidentalis-e, that is from the West.

Geographic Distribution and Habitat –
Western Anacardium is a species native to northeastern Brazil and is quite common in all the tropics, not just the Americans. In India and sub-Saharan Africa, where it was introduced by the Portuguese, it even became naturalized, forming extensive forests and becoming the main export product of Mozambique. Its area is widespread just beyond the limits of the tropic, everywhere the minimum average temperatures do not fall below 16º, and with falls below 10º very rare, as it does not tolerate frost. Being a tree very resistant to drought it also grows in areas with about 500 mm of annual rainfall. 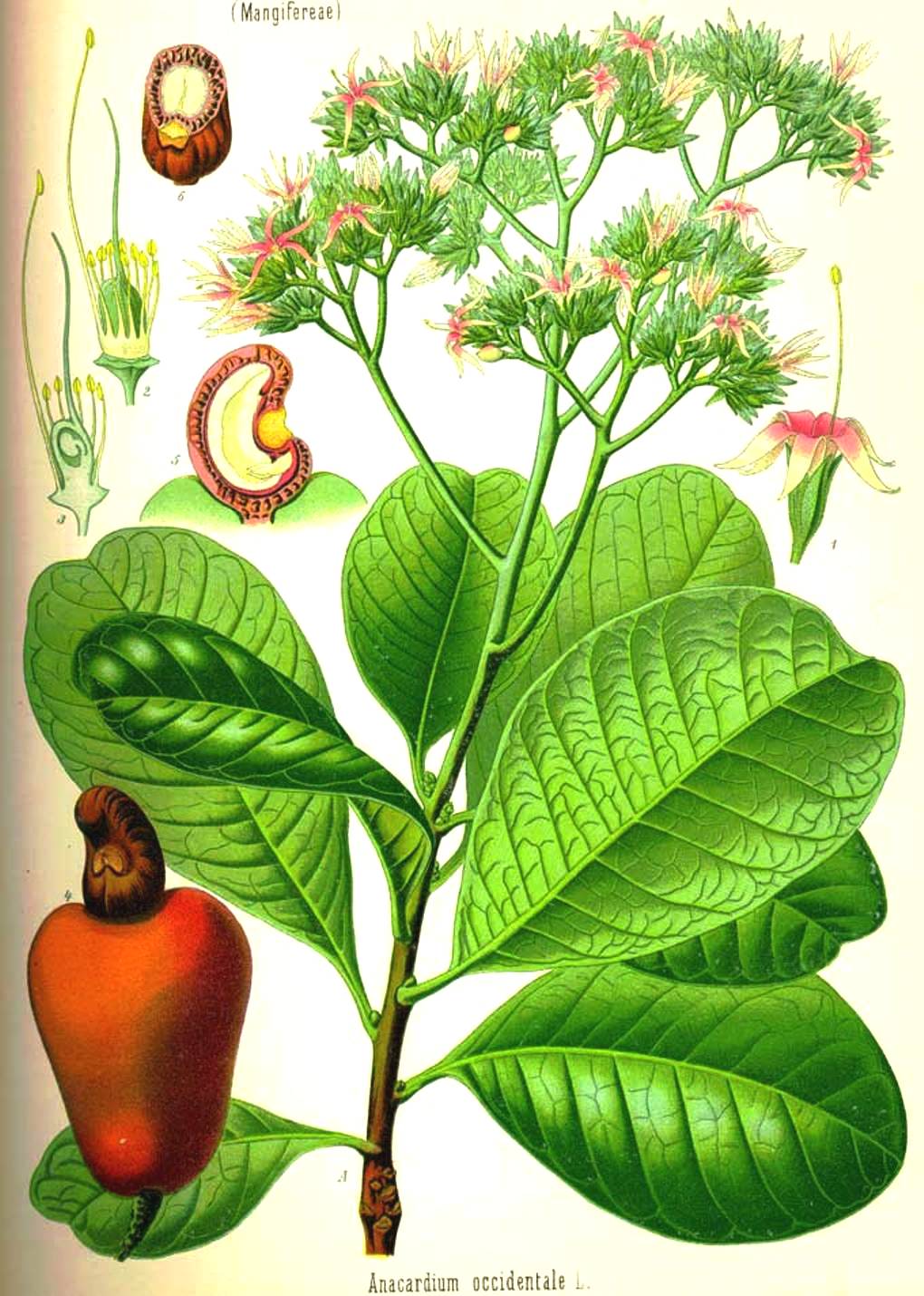 Description –
The western Anacardium is an evergreen tree, with an extended crown, which in cultivation can reach 6-10 m in height. The leaves are simple, alternate, obovate, up to 20 x 15 cm, glabrous, with rounded apex, not very petiolate. Flowers composed of inflorescences in terminal panicles, 10-20 cm long, male or female, with a calyx with 5 sepals; corolla with 5 linear lanceolate petals, 7-8 mm long, greenish with a reddish stripe. The androceo with 10 stamens. This plant has two types of fruit intimately united: one fresh, the “cashew apple” (called in Brazil “cashew apple”), and one dry, the “almond or cashew nut” (called in Brazil) “Cashew nut or cashew almond”).
The cashew apple is, botanically, a false fruit as it results from a hypertrophy of the floral pendulum that reaches the size of an apple more or less pearly. This comes with a smooth, thin and fragile surface, of a yellow to bright red color, and with a pulpy but fibrous mass. The “almond or hazelnut cashew”, which is the real fruit, is instead a walnut-shaped walnut with a hard pericarp, containing an oily and edible seed.

Cultivation –
The western Anacardium is cultivated for the production of its nut, the cashew, and its false fruit, called maragnone (from the Spanish marañón, derived from the Brazilian state of Maranhão, of which it seems native) or cashew nut (from the Portuguese cajú ).
This plant is usually multiplied by seed, has a rapid growth and requires areas without cold, in fertile soils, with a pH between 6 and 8, on exposure to the sun. It requires abundant watering in summer. For the cultivation technique, the following sheet can be consulted.

Uses and Traditions –
The Portuguese introduced this plant to India in the sixteenth century and today India and East Africa are its major producers. Its toasted fruits are edible because they contain a toxic oil. The bark and leaves have medicinal properties. Depending on the country where it is located, it takes several names: cashew in England, kaschu in Germany, cajou in France, merey in Venezuela.
The cashew seed is wrapped in a shell that contains a caustic substance that is easily removed to make the edible seed, but can be started for the production of cashew nut oil. The latter should not be confused with cashew oil, edible, extracted from kernels and not from the shell.
In the producing countries instead of the seed the fruit is eaten (false fruit). In Brazil, during the seasonal period of production, from the fruit, which is of acidulous and refreshing taste, a juice is extracted which is drunk after being lightly fermented. The cashew plant has a remarkable economic interest for the multiple uses, in addition to the food, from the shell is extracted an indelible ink, the juice has a much appreciated anti-worm power, from the fruit you get alcohol and vinegar and, after pressure, a valuable oil, from the plant you get a rubber and a milky liquid that are used as bases for paints. The juice, blackish in color, is resinous and extremely caustic, and is used in medicine.
The seed contains an irritating oil that must be removed with heat before the seed can be extracted with great care to avoid contaminating it. Turning cashew nuts into edible walnut is a complicated procedure and requires a lot of workmanship. Only 10% of the raw production passes unharmed through the various stages of processing and packaging. This explains the very high price of cashew nuts on the European market.
The cashew in shell is toasted so as to prepare it for the breaking of the shell itself, made mostly by hand. The fruit is again scalded to facilitate the removal of the light dark film that covers it. The cashew is a fruit that tends to rancid very easily so that, to keep well, it is necessary to limit the contact with the air.
Another interesting feature of cashew nuts is their chemical consistency. The fruits, in fact, are rich in monounsaturated fatty acids, folic acid, vitamin B 1 and B 2, mineral salts and vegetable steroids that help the reabsorption of cholesterol.

Preparation Mode –
In the kitchen, cashews can be eaten naturally, salted and toasted, only toasted or as ingredients for oriental dishes; one of the most famous recipes with cashews is, in fact, the chicken with cashews of the Thai and Chinese culinary tradition.
In India, especially in the state of Goa, the cashew flower is used to produce a liqueur, with a smell and taste of paint, called fenny, or feni or more particularly cashewfeni.