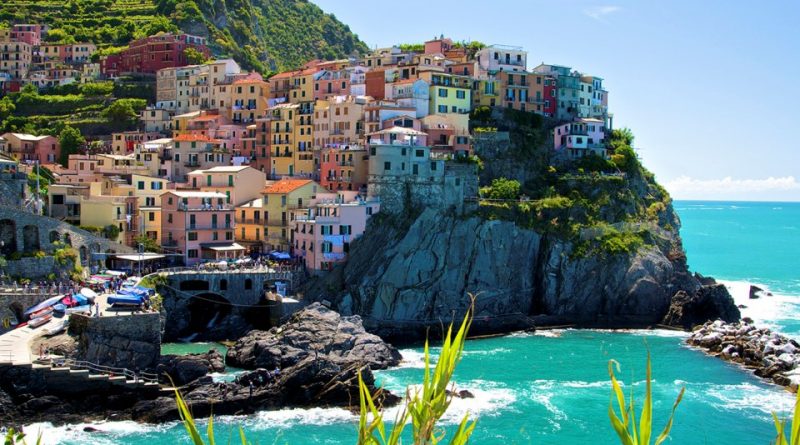 The Cinque Terre National Park is located in Liguria, in the province of La Spezia; is a protected area that was made national park in 1999. The park is based in Riomaggiore.
Cinque Terre National Park includes, in addition to the territory of the five towns of the Cinque Terre (Riomaggiore, Manarola, Corniglia, Vernazza and Monterosso), a portion of the municipalities of Levanto and La Spezia (Campiglia Tramonti). The park area is divided into three areas: coastal area, the real national park, and the marine area, the protected natural marine area.
This territory is in fact the coastal stretch of the Cinque Terre, where the mountains reach the sea, creating a unique coast. In fact, this park was created for the protection of an anthropized environment and provides, among other things, the preservation of the system of dry stone walls that support the terraced terraces overlooking the sea.
The Cinque Terre National Park is considered one of the most characteristic and romantic destinations in Italy, the Cinque Terre National Park is a cult in the tourist and environmental landscape of the country. Its houses perched high above the sea, the Promenade of Love and the terraces of olive trees and vines, have guaranteed this place a place of honor in the list of UNESCO world heritage, environmental and cultural heritage.

The Cinque Terre National Park offers environmental and cultural features to safeguard and enhance: coasts overlooking the sea with bays and small beaches, thousands of kilometers of dry stone walls to mark the terraces for the cultivation of the vine, the characteristic rustic, the villages medieval, the sanctuaries, the scenic paths on the sea and on the slopes. If you add then the fine Ligurian wines, fresh fish, cooking and traditional crafts, you can see the value of these places.
In this way it is possible to protect a coastal area where man has created a stable life and a mutual coexistence between himself and nature.
The Park is crossed, from Riomaggiore to Monterosso, from the ‘Sentiero Azzurro’ (Cai nº 2) and the highest point is located in Prevo, a tiny fraction of Vernazza, at 208 m. s.l.m .. For the particular Mediterranean climate, with dry summers and mild winters, you have a characteristic flora and fauna. There are in fact numerous microclimates often different from each other that have created a huge variety of landscapes.
The flora is characterized by maritime pines, Aleppo pines, cork oaks and chestnut trees, while in the rock environments there are many Mediterranean species such as sea fennel and Cineraria marina. In these territories there are rosemary, thyme, helichrysum and lavender; there are also numerous tree species and succulents visible from many coastal paths.
The fauna is also interesting and characteristic, linked to a unique environment and favorable to an optimal habitat for some animal species that find favorable environments in these places. Among the birds we must mention the seagull, the peregrine falcon and the imperial crow. Among the mammals, we remember the dormouse, the weasel, the mole, the badger, the marten, the fox and the wild boar, whose presence is not in ecological equilibrium and therefore causes a lot of damage to some agricultural crops. Among the reptiles, very much favored by this rock environment, one can find the wall lizard, the lizard and various snakes such as the snake, the colubro of Esculapio and the viper; finally, amphibians live around the streams like frogs and salamanders.