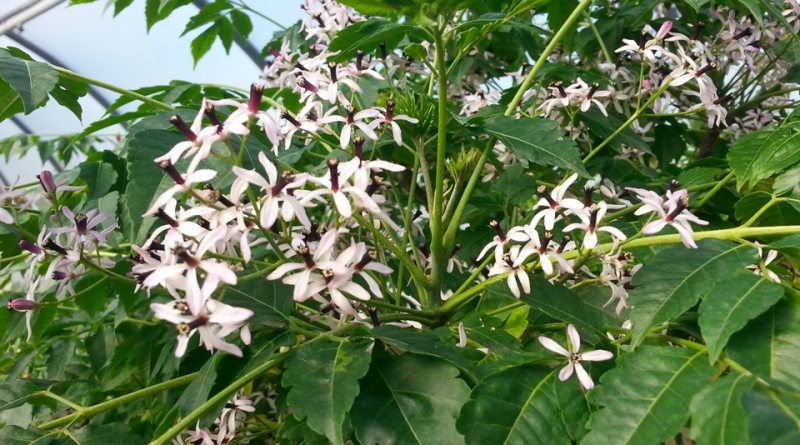 The rosary tree, also known as the tree of paternosters, Mindi or Quercia of Vietnam (Melia azedarach L., 1753) is an arboreal species of the family Meliaceae.

Systematics –
From the systematic point of view it belongs to the Eukaryota Domain, Kingdom Plantae, Magnoliophyta Division, Magnoliopsida Class, Subclass Rosidae, Order Sapindales, Family Meliaceae and therefore to the Genus Melia and to the Species M. azedarach.

Etymology –
The term Melia comes from the Greek μελία melía frassino, due to the resemblance of the leaves with those of the ash tree. The specific epithet is the name probably given by Arab doctors in the Middle Ages for the medicinal properties of the plant and that originally would mean ‘tree that frees’; according to the Stearns (Dictionary of Plant Names) it would derive from the vernacular name Persian azaddhirakt.

Geographic Distribution and Habitat –
Melia azedarach is a tree native to an area between India and Malaysia, then spread to southern China, Japan, the Solomon Islands and northern Australia. Widespread later by man, today it is naturalized in southern Europe, Africa, the United States, including Hawaii, Mexico, the tropical region of South America and the Galapagos Islands. In tropical and subtropical regions where it was introduced it is considered an invasive species. It is present in southern Italy, in Sicily, Sardinia, Marche and Liguria. It is found up to 700 m above sea level, in open areas and dry climate. It prefers old abandoned fields, land close to the roadway and other disturbed areas. 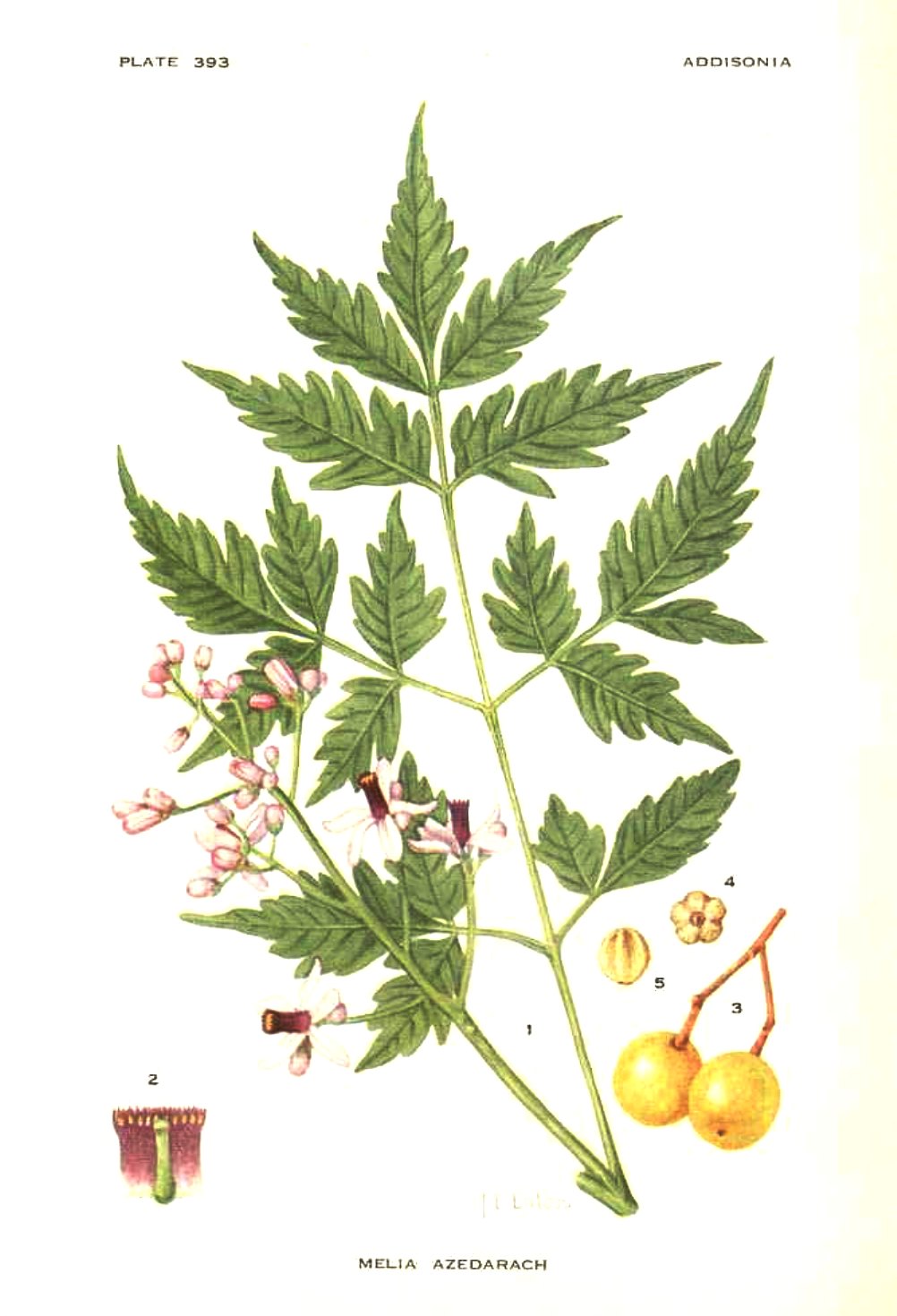 Description –
Melia azedarach is a tree that can reach 15 meters in height, with a very expanded foliage, more or less in the shape of an umbrella. The trunk is straight or curved and has a brown-greyish rind, a little ‘weakened and furrowed longitudinally, leaving a glimpse of that young reddish underneath. The young branches are pubescent. The leaves are up to 90 cm long, deciduous, opposite, carried by a long petiole, with imparipinnata lamina, composed of 5-7 leaves in turn, pinnate or bipinnate. The flowers are bisexual with blue-violet coloring; these appear at the end of spring in large corimbiform end panicles (up to 20 cm long). The fruits are spherical drupes of about one cm, ocher color when ripe and with a very hard and woody endocarp.

Cultivation –
The rosary tree is a fairly rustic species with minimal needs. It has a good resistance to cold, to pollution, to wind and tolerates long periods of drought. It has no particular pedological needs and is very well suited even to poor soils. Because of its repellent properties it is practically immune to attacks by phytophages. In conditions of optimal fertility it manifests a good vigor that is evidenced by the emission of vigorous root suckers. Under favorable conditions of humidity and temperature it becomes invasive and acts as a pest in parks and gardens.

Uses and Traditions –
Melia azedarach contains active ingredients with repellent action against insects with properties similar to those of azadiractin, erroneously considered to be insecticides. The leaves can be used as insect repellent to protect foodstuffs or other materials and together with other parts of the plant they must not be eaten, because they are highly poisonous. For these active ingredients flowers do not attract bees and other pollinating insects.
The toxic principles are due to powerful neurotoxins: tetranortriterpene and saponin, present in higher concentration in fruits. Some birds can eat fruit without receiving damage, spreading the seeds with their own excrement, but a dose of 0.66 g of fruit per kilogram can kill an adult mammal.
Symptoms of poisoning appear a few hours after ingestion and may occur with loss of appetite, vomiting, constipation or diarrhea, blood in the stool, stomach pain, pulmonary congestion, cardiac paralysis, stiffness, lack of motor coordination and in general weakness. In the event of lethal ingestion, death may occur after approximately 24 hours. In the past, due to its toxicological properties, the diluted infusion of leaves and bark has been used to induce relaxation of the uterus. The rosary tree owes its name because in the past the hard and spherical fruit core was widely used in the making of rosaries, before the advent of plastic materials.
The wood, known as mindi, is used for furniture veneering or for parquet floors; it is characterized by a very clear color, tending towards white and yellowish-white, with linear veins and is easily cut and workable.
This species can be used as an ornamental plant due to its rusticity and elegance of the foliage and flowers; this use, however, is limited by some negative factors such as the fall of the fruit at the end of the winter which stain the underlying areas, the bad tolerance of the plant to pruning and the tendency to become invasive. In addition, the toxicity of the berries would discourage the planting of this species in recreational areas.

Preparation Mode –
Although in the past the plant was used for some therapeutic purposes due to its toxicity, its use is not recommended.