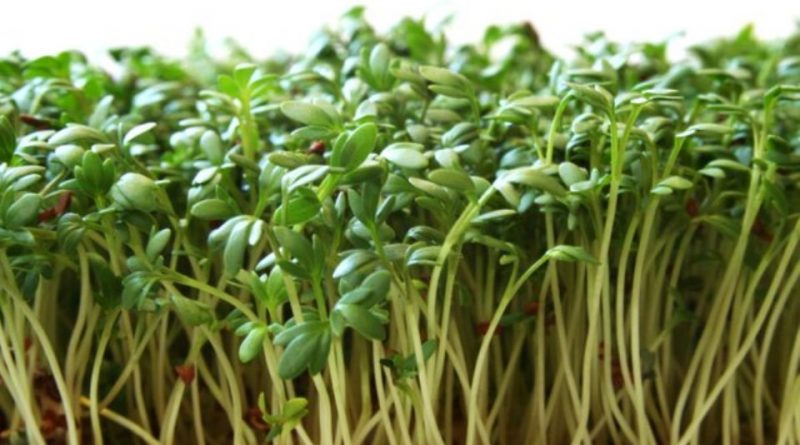 Systematics –
From the systematic point of view it belongs to the Domain Eukaryota, Kingdom Plantae, Magnoliophyta Division, Magnoliopsida Class, Order Capparales, Family Brassicaceae and therefore to the Genus Lepidium and to the species L. sativum. It is synonymous: Crucifera nasturtium E.H.L.Krause.

Etymology –
The term Lepidium comes from the Greek λεπίδιον lepídion, diminutive of λεπίς lepís scale (of fish), flakes: for the shape of the flakes similar to small flakes. The specific epithet sativum, comes from satum (past participle of sero sowing, planting) sown, planted: which is sown or plant, cultivated, domestic.

Geographic Distribution and Habitat –
The English watercress, is an annual plant of probable African origin (Abyssinia, Egypt), cultivated in the Middle Ages as a salad and today still present as adventitia in almost all regions of Italy, but in the process of rapid decline. It grows in the uncultivated, in abandoned fields, along the roads, from the sea level to the lower mountain belt. Biological form: scaposa terofita. 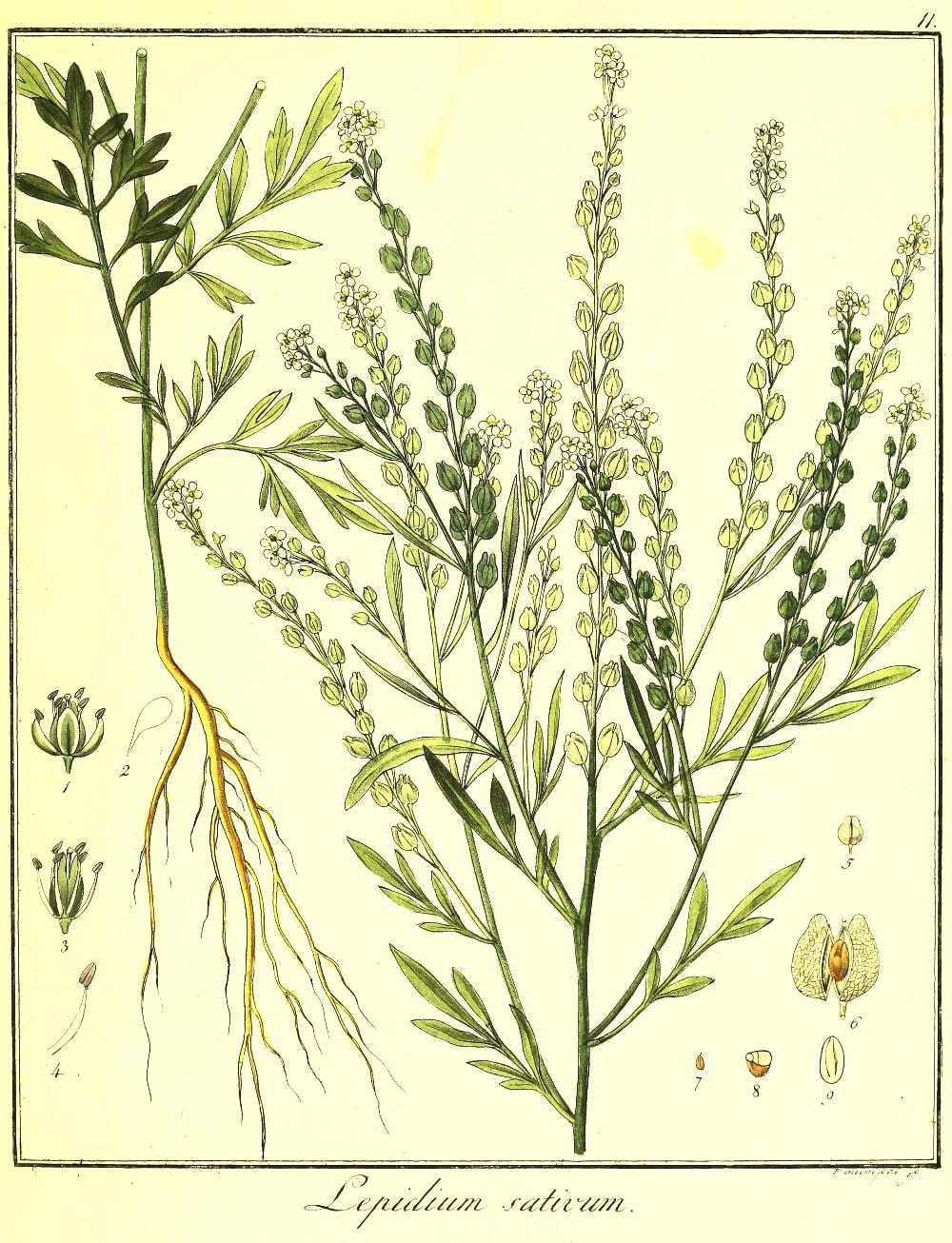 Description –
Lepidium sativum is an aromatic herbaceous species with bush, with tall (about 20 cm) and thin stems, with small bright green leaves, similar to small scales (hence the generic term) and with small and white flowers. The watercress is very aromatic, has a sour and spicy taste, very characteristic. The flowering period is between June and July. The siliquetta angustisetta is 6 x 5 mm, suborbastic, with a narrow wing of 1-1.5 mm in the upper half, edged at the apex, glabrous, non-protruding 0.2 mm stylus. Seeds one per hunk, of 2-3 x 1-1.5 mm, obovate-oblong, without wings, finely papillose. reddish-brown.

Cultivation –
The watercress is a plant of easy cultivation, which should be grown in cool and semi-shaded places as it fears the heat and the direct rays of the sun. It prefers well-worked soils of medium texture, wet, fertile and rich in organic substance and with constant and regular irrigations throughout the vegetative period that goes from sowing to seed production to guarantee the right degree of humidity.

Uses and Traditions –
The Lepidium sativum is a plant rich in vitamins and mineral salts (including sulfur), which can help for detoxification from smoke and smog, is also a natural diuretic. It seems that it also possesses digestive and cardiovascular properties and is widely used for food use, as an aromatic plant, as well as a medicinal plant.
Watercress is used to perform phytotoxicity analysis (cress test), since its germination requires only 24 hours at 27 ° (or 36 hours at 22 °). Germination indexes lower than 40% of the control sample with 30% diluted samples indicate the presence of substances that cause lethal effects on plants, from 40 to 60% there is hardly lethality but there may be delays in development, with indices above 60 -70% no obvious damage to plants.
To be precise, it should be emphasized that there are three different herbaceous plants commonly called watercress: the watercress “Nasturtium officinale”, the English watercress or common watercress or “Lepidum sativum” and the watercress of the “Cardamine sativum” meadows. The first is the one most appreciated for its aromatic, therapeutic and aphrodisiac qualities. Of sour taste, baptized “Nasturtium” (which makes the nose turn up) because of its spicy smell; this was very well known in antiquity because it grew spontaneously near the waterways.
The Persians considered the ideal food cress for the children, while Discoride classified the seed of the “hot” plant, apt to stimulate Venus. Even among the Romans this herbaceous plant was considered corroborating and aphrodisiac. Pliny believed that it would make the mind livelier, and Petronius in the Satyricon made use of the juice to a priestess of Priapus to anoint the genitals of Encolpio struck with impotence.
Watercress is used both flowers and leaves. Both are collected when the plant is in full bloom, that is from May to July. The product must be used fresh as it loses many of its properties when dried.

Preparation Mode –
In the kitchen the characteristic aroma of the watercress makes it unsurpassable in salads, sauces, soups and in all raw preparation married to cheese and bread. It has a sour and spicy taste, very characteristic. It is used both cooked (boiled or in soup) and raw: in salads, antipasti, piadine. In Italy it is very common in Romagna cuisine. It should be used fresh, otherwise it loses its nutritional properties. It can also be used as an aromatic plant to flavor mashed potatoes and cheeses or decorations. Both the leaves and the flowers are used. It should be collected shortly before and during the flowering period (May, June), and should not be collected beyond this period.