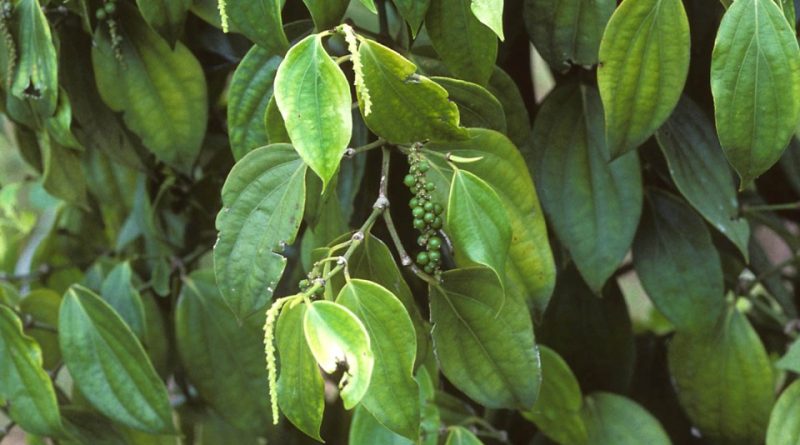 The pepper (Piper nigrum L.) is a perennial woody liana belonging to the Piperaceae family.

Systematics –
From the systematic point of view it belongs to the Eukaryota Domain, Kingdom Plantae, Magnoliophyta Division, Magnoliopsida Class, Piperales Order, Piperaceae Family and therefore to the Piper Genus and to the P. nigrum Species.

Geographic Distribution and Habitat –
Piper nigrum is a species native to southern India and is cultivated extensively both in India and in tropical countries. This species has been used as spices in India since prehistoric times. It is believed to have been cultivated for the first time along the Malabar coasts in India, which currently corresponds to the state of Kerala. 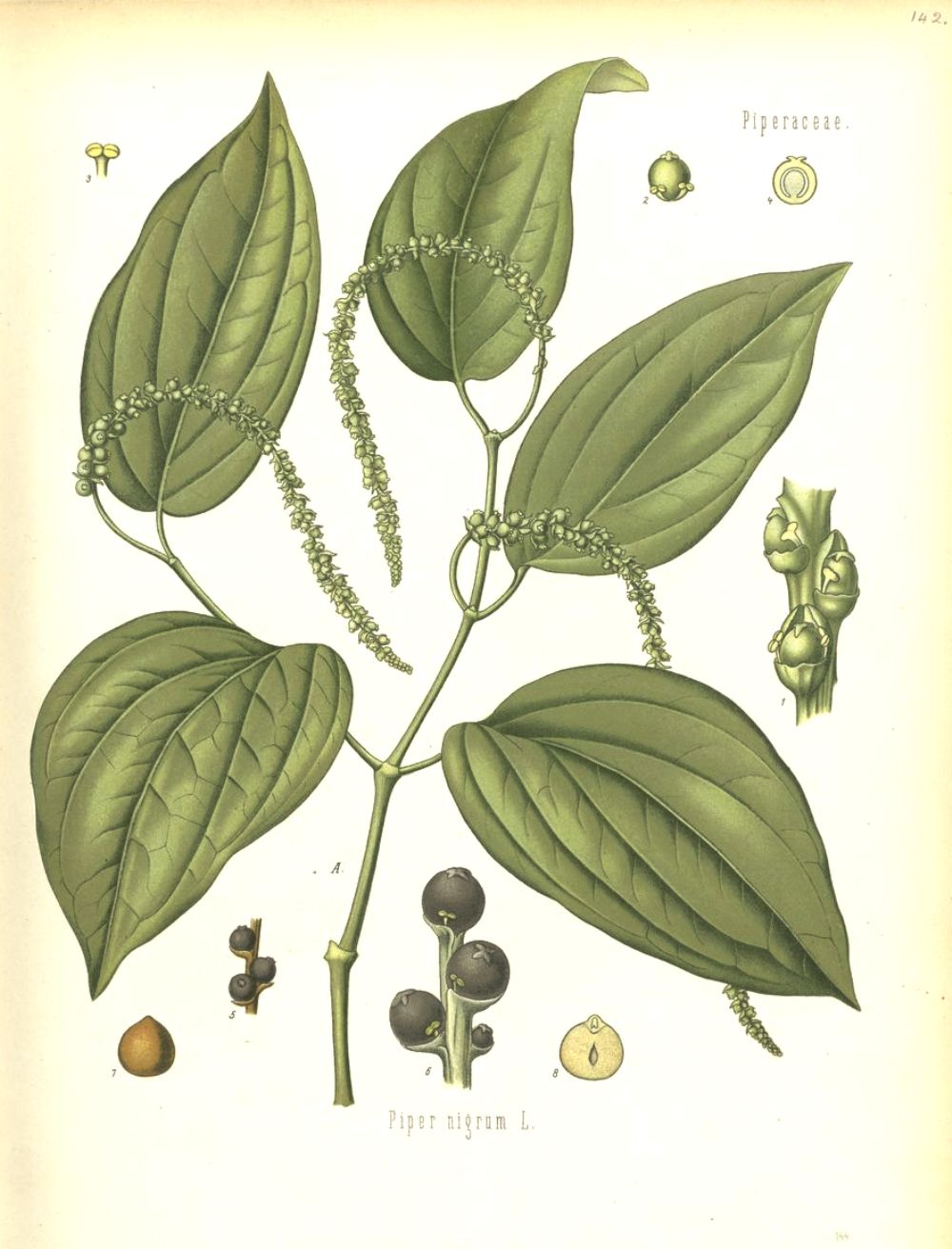 Description –
Piper nigrum is a species that in the form of perennial woody liana can reach four meters in height. The leaves are alternate, coriaceous, of oval shape with dimensions of 5-10 cm of length and 3 – 6 cm of width. It has small flowers in inflorescences, located on a pendulum axis of 7-9 cm, inserted at the base of the leaves. Flowers can be unisexual or hermaphrodite. The fruit of the pepper is a drupe that contains only one seed of about 5 mm of diameter, first green in color and then red when ripe.

Cultivation –
This plant grows in preferably moist and well fertilized soils with organic matter. Propagation occurs by cuttings and the plants climb or to specially created supports or to walls and plants. The plant can also be grown in protected environments and in apartments, following certain prescriptions. For this technique you can consult the following sheet. Its fruits are then dried to be used as spices.

Uses and Traditions –
Pepper is one of the most used spices in European cuisine and its derivatives since ancient times both for their taste and for their use in Ayurvedic medicine. The spicy taste is given by piperine. Once pepper was a valuable commodity and for this it was called black gold and used also as an exchange currency.
The history of Piper nigrum intertwines with the history of ancient civilizations and their activities; in fact, together with other spices produced in India and in the countries of South East Asia, it has affected the history of the world. Also for this spice the famous route for the Indies was generated and the consequent colonization of those countries. Its use is lost in the mists of time; one of the first finds dates back to the discovery of a grain of black pepper in the nostril of the mummified body of Pharaoh Ramesses II, who died in 1212 BC, although little is known about its use in ancient Egypt.
It is also possible that the pepper was known in China as early as the 2nd century BC, if it is correct as reported by an explorer named Tang Meng (唐蒙). He was sent by the Chinese emperor Wu Han in the region that is now the southwest of China and claimed to have known jujiang or betel sauce. According to some historians, the betel sauce is a sauce made with betel leaves, but other arguments suggest that it is pepper. In the III century AD, pepper appears for the first time safely in Chinese texts such as hujiao or foreign pepper.
Both black pepper and long pepper were known in Greece as early as the 4th century BC, as a very valuable commodity, prerogative only for the rich.
Black pepper was very well known and widespread in the Roman Empire and also very expensive here. Marco Gavio Apicius (Marcus Gavius ​​Apicius), gastronomist and Roman cook, in the De re coquinaria, a cookery book of the III century, which partly refers to one of the first century, uses pepper in most of the recipes.
However over time the value of pepper was so important that it determined itself to be trading currency in the financial markets and often as currency.
At the end of the early Middle Ages, pepper traffic control was firmly in the hands of the Muslims. At one time the trade was monopolized by some Italian states such as the Republic of Venice and the Republic of Genoa. The development of these city-states was due for the most part to the pepper trade.
Its high value during the Middle Ages and the monopoly of trade held by the Italian maritime republics, was one of the reasons that led Portugal to find a marine route to India. In Calcutta the Arabs asked him why he had come and he replied “let’s look for Christians and spices”. Soon the Portuguese, thanks to their naval power, obtained complete control of the spice trafficking in the Indian Ocean, even though over time the Portuguese were unable to maintain their supremacy over pepper traffic for long.
Black pepper has been both a condiment and a medicine in history; figure in the remedies of Ayurveda, Siddha and Unani medicine in India. The Syrian Book of Medicine of the fifth century prescribes pepper for the following diseases: constipation, diarrhea, earache, gangrene, heart disease, hernia, indigestion, insect bites, insomnia, liver problems, oral abscesses and more . Even today, however, there is no medical confirmation that these treatments could bring any benefit. However, the pepper should be removed from the diet of patients operated on the abdomen or with abdominal ulcer in progress due to its irritant effect and not used by people suffering from: gastro-oesophageal reflux, esophagitis, gastric ulcer, duodenal ulcer, colitis, Crohn’s disease , diverticulitis, hemorrhoids and anal fissures.

Preparation Mode –
The fruits of the pepper, if picked still immature, give the so-called green pepper, with soft berry, generally preserved in brine; the ripe fruit, on the other hand, provides black pepper. The latter, deprived of the outer rind, fermented and dried, provides white pepper.
It is widely used in the kitchen, to perfume and flavor many dishes: it is important that it is ground at the time of use to keep intact all its aroma. The spicier pepper is black, while white has a more delicate aroma. The green pepper, which has a fresh and delicate taste, is used whole, lightly pounded with the blade of a knife. The pepper loses a little ‘scent with prolonged cooking and it is therefore better to add it towards the end, except for the one used for the broth that develops its aroma well with the long cooking.