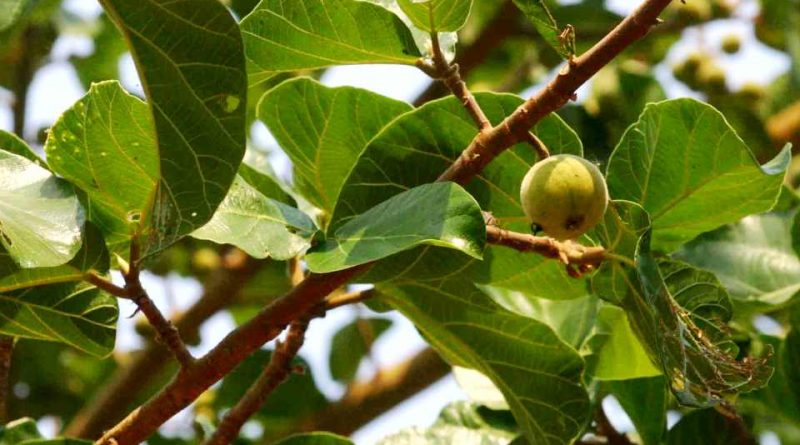 The sycamore (Ficus sycomorus L., 1753) is an arboreal species, widespread in Africa and the Middle East, of the Moracea family.

Systematics –
From the systematic point of view it belongs to the Eukaryota Domain, Kingdom Plantae, Magnoliophyta Division, Magnoliopsida Class, Subclass Hamamelidae, Order Urticales, Family Moraceae and therefore to the Genus Ficus and to the Species F. sycomorus.

Etymology –
The term Ficus comes from the name of the classic Latin of the fig tree, a genus already known then and probably derived from Hebrew. The specific epithet sycomorus comes from the union of the Greek terms σύκη sýce, fig (plant) and μόρεα mórea, mulberry.

Geographic Distribution and Habitat –
Ficus sycomorus is an arboreal species that grows wild in the south of the Arabian peninsula, in some regions of Africa, from Senegal to South Africa and in some areas of Madagascar. It is cultivated from remote eras in Egypt, Israel and Syria. The distribution area of ​​the sycamore gives us the opportunity for an interesting reflection: there are many species that have a geographical distribution divided into two sectors, one to the north of the Sahara, and the other to the south. The two areas are almost certainly derived from a single original area; once the area was homogeneous (and it was not a desert), and the sycamore population constituted a unique whole, extending from sub-equatorial Africa to the shores of the Mediterranean. The current area (disjoint) derives from the ancient but unstoppable process of desertification that involves North Africa, and that, in this case, has broken the continuity of the spread of this species. 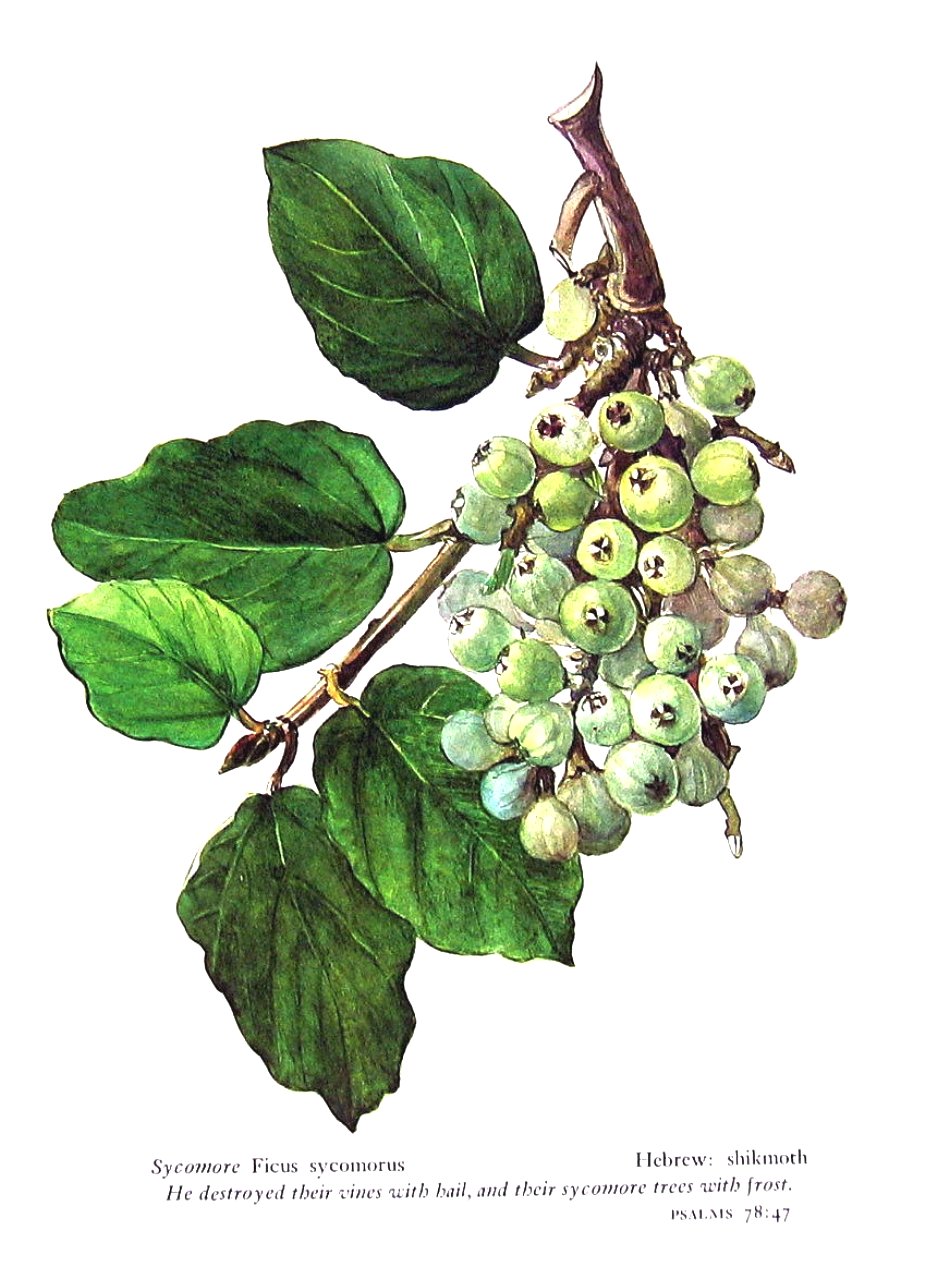 Description –
The Ficus sycomorus is a large tree that can grow up to 20 meters in height and with a diameter of 6 meters in width; it is characterized by a wide and rounded crown and with a bark that goes from green-yellow to orange. The leaves are oval with a rounded apex, with an average size of 14 cm in length and 10 cm in width arranged in a spiral around the branches. The fruit is a Sicilian with the unisexual, very small flowers enclosed inside; through a small apical opening, called ostiolo, the entry of the pronubi hymenopteris takes place; the real fruits, which develop within the inflorescence, are small achenes.

Cultivation –
The sycamore is a plant that does not bear too harsh winters, during which it may lose its youngest branches; it also fears the frosts and sudden spring frosts: it grows best in the Mediterranean area and should never exceed 600 m of altitude. Always loves sunny aspects, even in the South. It is a plant that grows on any type of soil (as long as it is not wet and stagnant) and can grow on slopes and embankments, because it is not demanding for quantity of nutrients. However it prefers calcareous soils, loose, even sandy, permeable, stony and arid.
The sycamore, unlike the different species of Ficus, which generally have a strictly species-specific relationship with their pollinators, which are all hymenopterans of the Agaonidae family, is an exception, as it can be pollinated by two different agaonids: Ceratosolen arabicus and Ceratosolen galils.

Uses and Traditions –
The sycamore wood is tender, porous and very resistant, because of its qualities it was used by the ancient Egyptians to make sarcophagi like those found in tombs dating back more than 3,000 years ago. There are also those who say that it is an antidote to snake bite, but this is more a way to encourage the sale by the sellers of the souk of Khartoum, which in fact tend to cheat the unsuspecting buyer.
The Egyptians considered the sycamore a sacred tree dedicated to Hathor, an ancient divinity of Egyptian mythology, goddess of love and joy that at sunset ate the sun (Horus identified as sun-god) to return his life a few hours later Sunrise. The goddess Hathor was considered “Lady of the sycamore of the south” and as such she was solemnly venerated in Dendera where there was an important temple dedicated to her with a history of archaeological mysteries still to be deciphered.
In the Book of Amos (Kingdom of Judah around 775-750 BCE), the eponymous prophet asserts that he was, before dedicating himself to the prophetic mission, “a shepherd and gatherer of sycamores”; which testifies that at that time the tree was already present in Palestine and used by man.
In the Scriptures we talk about a sycamore when, on the occasion of Jesus’ arrival in Jericho, a rich landowner named Zacchaeus, being of short stature, climbed a sycamore plant to see Jesus as he passed by. From the Gospel of Luke (Lk 19, 1-10) we read “… Then he ran forward and, to be able to see him, climbed over a sycamore tree, because Jesus had to pass that way. Jesus, coming to that point, looked up and said: “Zacchaeus, come down quickly, because today I have to stop at your house …”
Moreover, according to a legend referring to the New Testament, Judas Iscariot hanged himself from a sycamore tree.
From a letter written by Orazio Antinori to his brother Raffaele, from Lét (Lit) Merefià, in 1879, we read: “… We do not miss the decoration, outside, on the left of our enclosure, a giant sycamore of 10 meters in circumference, 40 d ‘ height, which with its vegetables protects from the sun in the hot hours, and with its truncated branches, high, barren of leaves for an ancient time, provides a precious material to my collections, in birds, especially raptors, which in these trunks go to rest. … “.

Preparation Mode –
As for the fig tree, also the fruits of the sycamore can be eaten fresh, cooked, or dried to preserve them. From this fruit one can obtain an alcoholic drink, as was used in ancient Egypt; today, however, in many areas of origin, due to the Koranic law, this drink is no longer produced.
The sycamore is also a medicinal plant: in this case it is mainly used the latex, indicated for example for scrofulous, and for internal use against worms, dysentery and some respiratory diseases.