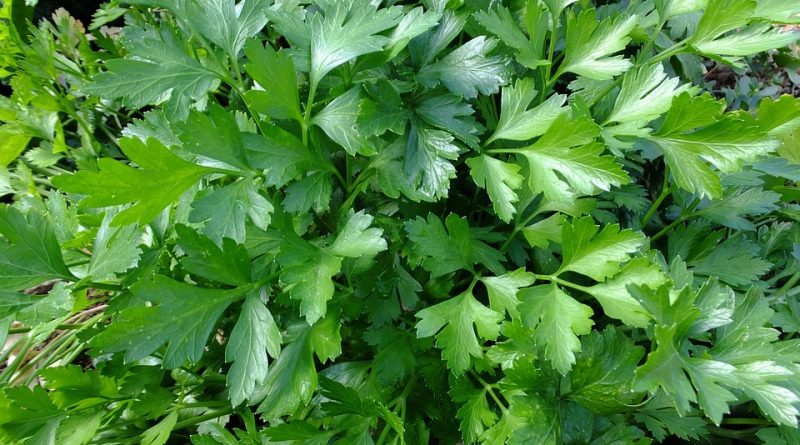 Systematics –
From a systematic point of view it belongs to the Eukaryota Domain, Kingdom Plantae, Magnoliophyta Division, Magnoliopsida Class, Apiales Order, Apiaceae Family and therefore to the Genus Petroselinum and to the P. crispum Species.

Geographic Distribution and Habitat –
Petroselinum crispum is a species native to the Mediterranean regions; we find it spontaneous in the woods and meadows of the temperate climate areas because it fears intense cold. It is widely cultivated in temperate climates in different horticultural varieties. 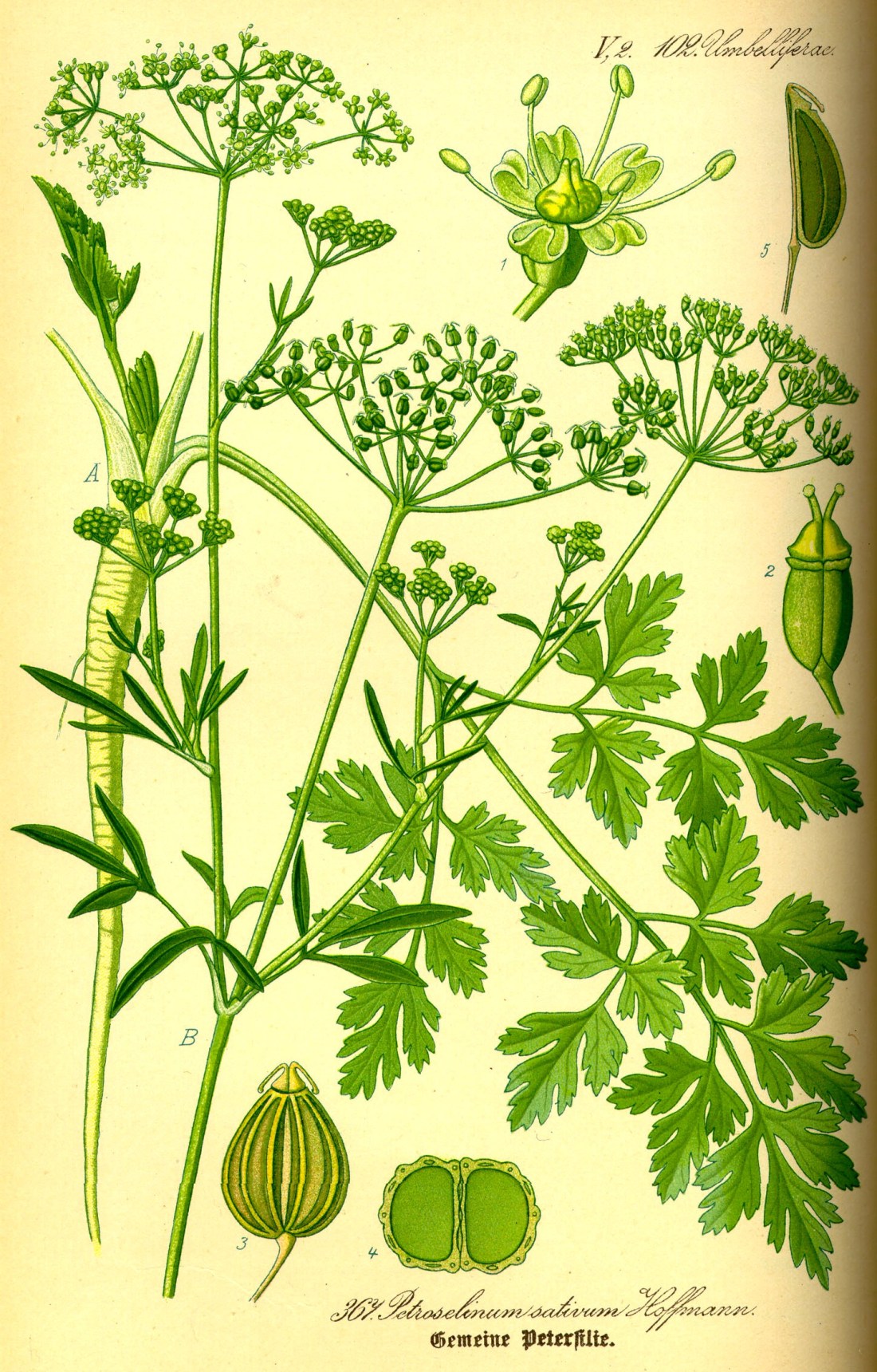 Description –
Parsley is a herbaceous plant, biennial in temperate zones or annual in tropical ones. It is a species with a taproot root of yellowish white color. The leaves are hairless and with a jagged triangular contour, they can be bipinnatosette or tripennatosette. The flowers are inflorescence; this is an umbrella made up of about fifty small flowers, composed of five white or suffused blue-violet or yellowish petals that bloom in summer during the second season.

Cultivation –
Petroselinum crispum is a biennial plant, if the flower stems are cut as they grow; it can be stored for several years. The species is cultivated in several varieties that are also distinguished by their size. For the cultivation technique you can consult the following sheet.

Uses and Traditions –
The parsley is used both for the leaves and the stems, and more rarely the root, both for fresh consumption and for the preparation of sauces, soups and fish. In addition to food uses, the poultice compress is used to relieve insect bites, bruises and toothaches. The pulp of the leaves applied on the udders makes the milk regress. Petroselinum crispum has diuretic and sudoriferous properties, mainly due to a flavonic substance: apioside. In Chinese herbal medicine it is also used as a remedy for high blood pressure. It is also known its use in antiquity as an emmenagogue and abortifacient, due to the apiolo, a main component, which contracts the smooth muscles of the intestine, bladder and uterus. Due to its composition, therefore, it is not recommended for use in uncontrolled mass quantities, as it can cause noticeable disturbances and poisoning.
Although consumption of fresh parsley is considered safe, the toxicity threshold (and interactions with other substances) should not be avoided in high doses by pregnant women due to possible uterotonic effects. The essential oil of parsley, if ingested, can also have adverse effects on the liver; in addition, psoralene and its derivatives, present in the parsley plant, have been linked to the photodermatitis that affect the parsley collectors. It is also remembered that this species is poisonous for cats, parrots and small animals in general, which in fact normally avoid eating.
Parsley is known from the earliest times and is cited by ancient authors. Pliny (1st century AD) highlights some uses as follows: “Of other kind some call parsley the one born among the stones, particularly indicated against the abscesses with the addition of two tablespoons of its juice in a glass of juice marrobio, all in three glasses of hot water. Some have added the buselino that differs from the cultivated due to the shortness of the stem and the red color of the root, but has the same effect. They say that drinking or applied as a cataplasm is effective against snakes “. He also quotes it in other passages. Even Apicius (1st century AD) in De re coquinaria, inserts parsley, naturally as aromatic herb, in such a vast number of recipes that it would be impossible to report all of them here. To understand his use and his knowledge since ancient times, to the present day, he cites it: Columella (1st century AD), Isidore of Seville (VI ° -VII ° century AD), Dioscorides (1st century AD), Galen (2nd-3rd century AD), Domenico di Giovanni, aka Burchiello (XVth century), Pietro Aretino (XVIth century), Giovan Battista Basile (XVIth century) Century), Nicolò Franco (16th century), Tommaso Campanella (16th-18th century), Vincenzo Monti (18th century), Giovanni Michele Savonarola (15th century) and so on.

Preparation Mode –
Parsley is an ingredient of many dishes and many sauces. It is used for example minced to add to salads or to sauce with clams or vice versa with whole leaves in roasted fish. It has a pungent and slightly bitter taste that revives the taste of other herbs. It is also used in pesto and in various recipes for the ability to give a particular aroma.