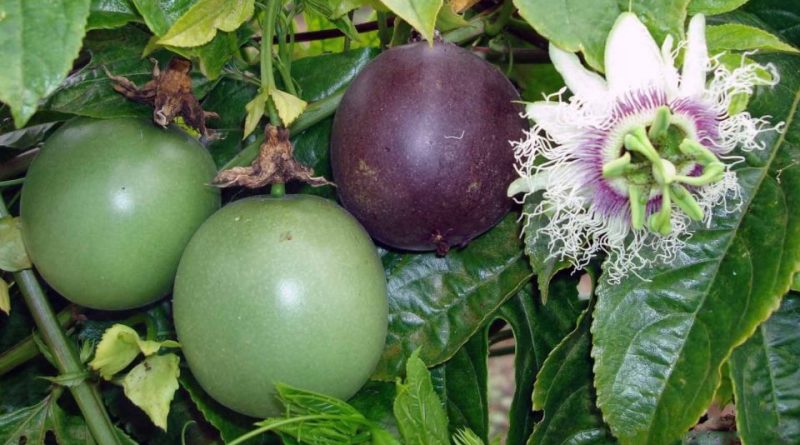 The Maracujá or passion fruit (Passiflora edulis Sims, 1818), is an edible species with climbing habit, native to South America, of the Passifloraceae family.

Systematics –
From a systematic point of view it belongs to the Eukaryota Domain, Kingdom Plantae, Magnoliophyta Division, Magnoliopsida Class, Euphorbiales Order, Passifloraceae Family and therefore to the Genus Passiflora and to the P. edulis Species.

Etymology –
The term Passiflora comes from pássio, passion and from flos, floris, flower: therefore, flower of the Passion, for its appearance that recalls the symbols of the Passion of Christ. The specific epithet edulis derives from édo, to eat: for the edibility of its fruits.

Geographic Distribution and Habitat –
Passiflora edulis is native to South America and Mexico and then spread to Europe and other parts of the world especially with missionaries after 1700. Today it is widespread and cultivated mainly in different tropical and subtropical regions all over the world. 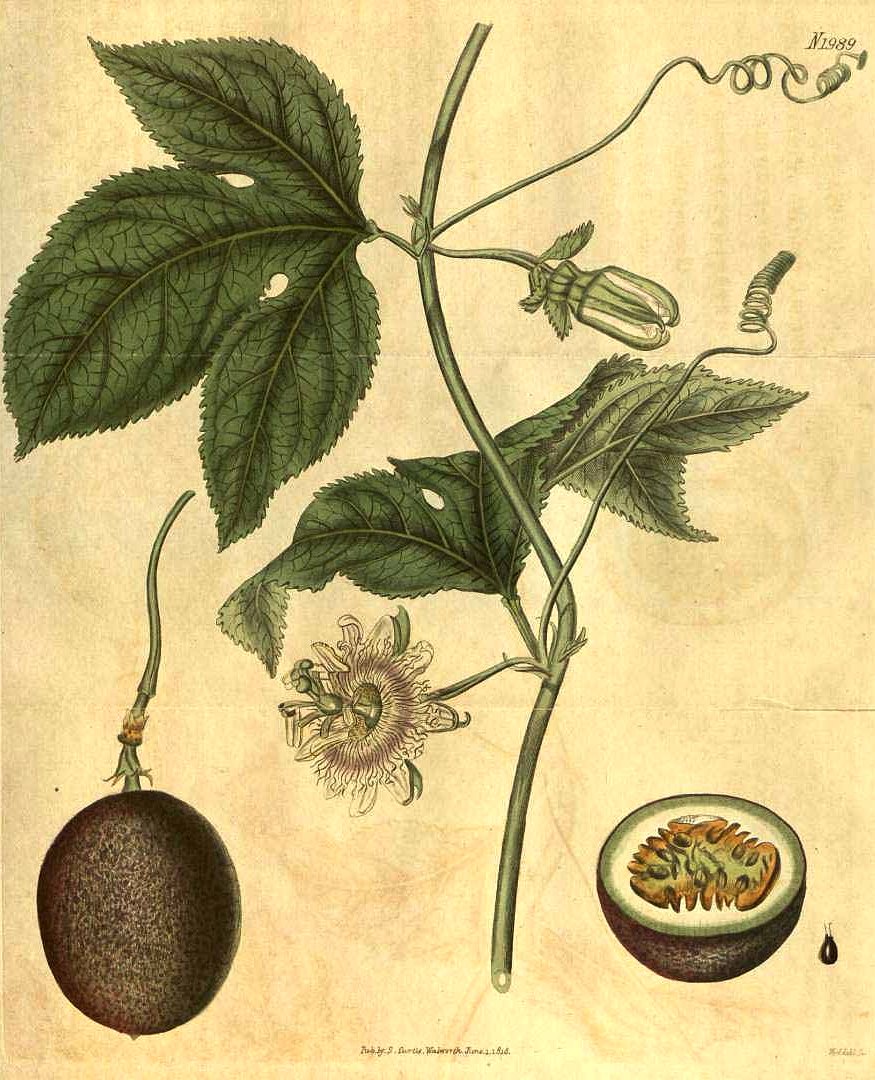 Description –
Passiflora edulis is a perennial climbing plant of about 150-160 cm in height; the tendrils, with shades of red or purple when young, are worn in the axles of the leaves. Usually the vine produces a single flower 5-7.5 cm wide on each node; this consists of 5 oblong and green sepals and 5 white petals. Both the sepals and the petals have a length of 4-6 mm and form a fringe. The base of the flower is an intense purple color with 5 stamens, an ovary and a branched stylus. The styles are bent backwards and the anthers on these are very evident.
The fruit (berry) is fleshy, spherical-egg-shaped with an outer color of the berry that varies from dark violet with white patches up to light yellow. The fruit has a diameter of 4-7.5 cm; the purple fruits are smaller, weighing about 35 grams, the yellow ones, bigger, weigh around 80 grams. Inside the berry, we find about 250 black seeds, each 2.4 mm long. Each seed is surrounded by a membranous sac full of pulpy juice with a slightly sour and musky flavor. The taste of the passion fruit can be compared to that of the guava fruit. Of this species there are two main varieties: P. edulis f. edulis and P.ulisulis f. carp flavi.

Cultivation –
For the cultivation of this plant it should be noted that the species Passiflora edulis, unlike other passion flowers, is self-fertile for which it can produce even if grown alone. It can be grown where the temperature does not drop below 0 ° C or protected from such temperatures adequately. The harvest of this fruit is done twice a year: in September and February-March (in Sicily). For the cultivation technique you can consult the specific sheet.

Uses and Traditions –
The name of the fruit of the passion, discovered for the first time by the Jesuits in 1610, was given by the missionaries in Brazil, around 1700, as an educational example, while trying to convert the natives to Christianity; its original name was flor das cinco chagas, meaning “flower of the five wounds” to illustrate the crucifixion of Christ; the similarity is linked to the particular shape of its flowers, which recall in the pistils the nails of the passion of Jesus, and in the rays the crown of thorns. Also the tendrils seem to recall the whip of the scourging.
The name maracuyá or maracujá derives instead from a word guaranì which means “nursery for flies”. In the Dominican Republic, the fruit is called quinola, which probably derives from the word China, similar to orange, which originated in that country.
The fruit, more than for its very soft pulp and rich in small seeds, is appreciated for its intense and characteristic scent, for which it is used in the production of juices, ice creams, liqueurs, alcoholic beverages, cocktails and other preparations for food use. This is one of the main reasons why the passionflower edulis is grown in different tropical and subtropical regions all over the world; while it is grown in private gardens rather than for ornamental purposes.
This fruit is consumed and marketed in various ways; from fresh to all its derivatives in different states and in each of these according to particular customs and eating habits. So from Australia, to New Zealand, Brazil, Colombia, Dominican Republic, East Africa, Hawaii, India, Indonesia, Mexico, Paraguay, Peru, Portugal, Puerto Rico, South Africa and Sri Lanka, to name a few the use, the name , drinks and uses take on their own and unmistakable characteristics.
The raw passion fruit contains 73% water, 22% carbohydrates, 2% protein and 0.7% fat. Referred to 100 grams, the fresh fruit contains 36% of the daily value of vitamin C, 42% of dietary fiber, vitamins B riboflavin (11%) and niacin (10%), 12% of iron and 10% phosphorus. In addition, various varieties of passion fruit are rich in polyphenol content, while the yellow varieties of the fruit contain prunasin and other cyan glycosides, both in the skin and in the juice.

Preparation Mode –
Passiflora edulis, as seen, finds very varied uses and preparations mainly linked to the food traditions of the individual countries. In the kitchen with this fruit you can prepare jams, sauces and desserts, to name a few of its many uses; these dishes or preparations are highly sought after because they are rich in Vitamin C, iron, carotenoids, mineral salts and potassium.