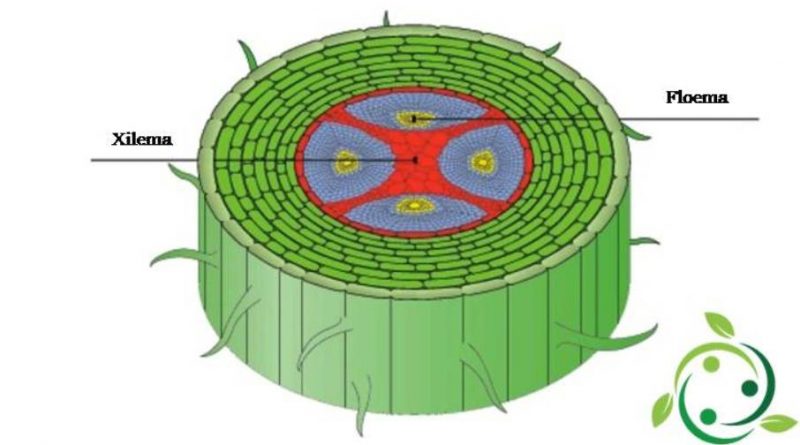 The xylem is the vegetal tissue of the vascular plants that provides for the transport of the raw lymph, that is of water and solutes dissolved therein, from the roots to the leaves. The term “xylem” comes from the Greek ξύλον xylon, which means “wood”.
The xylem (together with the phloem) is produced by the prochange, which is a tissue with cell differentiation capacity, during the initial growth stage of the plant. In this phase the primary xylem is formed towards the inside and the primary phloem towards the outside. Subsequently, during the secondary growth stage, another tissue with cellular differentiation capacity, called cribro-vascular change, produces secondary xylem and secondary phloem always with the same orientation. The xylem is in fact a tissue composed of cells that have undergone substantial changes: lignification process of the secondary walls and absence of cytoplasm and other internal organelles. These cells allow a vehicle with minimal resistance of the ascent from bottom to top of the raw lymph.
The xylematic tissue comprises two types of tracheal elements:

– the elements of the vases, or trachee: typical elements of the Angiosperms, but also of a group of Gimnosperms (Gnetofite); these are short and cylindrical cells with a diameter of 200 to 700 microns, with partially reabsorbed transversal walls. These cells are arranged on top of each other so as to give rise to a tube, called a vase. These cells also allow a lateral exchange of water and substances dissolved in it;
– tracheids: these are typical elements of the Gymnosperms and some Pteridophytes (ferns); they are longer than the tracheas but with a smaller diameter (20-30 microns) with the same functions as the vessels.
The elements that make up the xylem are then subdivided according to the thickening of the wall; on the basis of this differentiation we can have: anulata vessels, spiral vases, scalariformi vessels, reticulated vessels and dotted vessels; each of which performs a particular function.
Other types of cells present in the xylem are the parenchyma and the fibbers.
Between the xyema of the Angiosperms and that of the Gymnosperms there are therefore some structural and functional differences; in fact the xyema of the Angiosperms is called eteroxilo, as it consists of trachee, fibers and parenchyma rays; The xylem of the Gymnosperms is defined as homoxyl because it is made up of fibrotracheids which are elements that alone perform the function of transport and support.
The transport of the raw lymph in the xylem takes place both by capillarity, and by the radical pressure that tends to push the raw lymph upward, and for the pressure differential generated by the stomata present in the epidermis which in fact create an aspiration that draw water from bottom to top. This last phenomenon is the one that allows above all the ascent of the raw sap in plants tens of meters high.