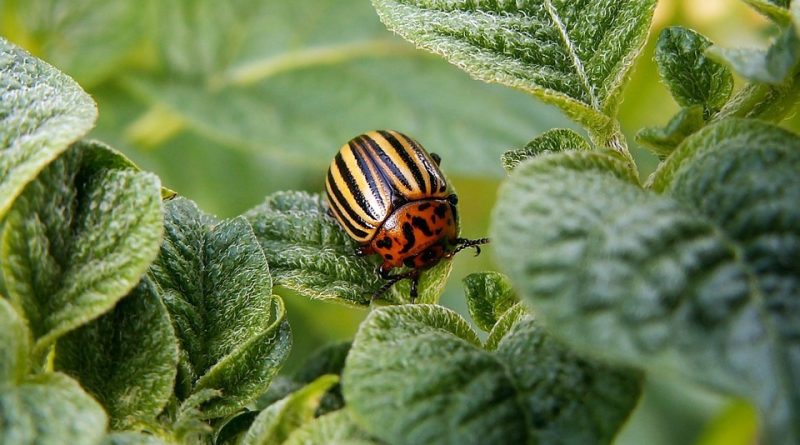 The Colorado beetle of the potato (Leptinotarsa ​​decemlineata Say, 1824) is an insect Chrysomelidae belonging to the order of the Coleoptera.

Geographic Distribution and Habitat –
Leptinotarsa ​​decemlineata is an insect native to southern Mexico, where it lived exclusively on a wild solanum solanum rostratum, in small populations. Subsequently with the beginning of the extensive cultivation of Solanum tuberosum, perhaps following a small genetic mutation, he preferred this plant. so already in the mid-nineteenth century it spread rapidly in North America and, with the second world war, it arrived in Europe where now this insect is widespread. Today the potato dorifora is widespread in almost the whole globe.

Morphology –
The adult form of Leptinotarsa ​​decemlineata is characterized by a length of 10-12 mm, oval shape, with a yellow-ocher background color, pronotus and legs with irregular black spots. It has lighter colored elytra, which have longitudinally ten black bands (hence the name of decemlineate). The pupa, which is similar in appearance to that of the larva, is immobile and settles in an earthy cell at 5-15 cm depth; place where the definitive metamorphosis takes place. The larvae are oligopods and campodeiforms, 11-12 mm, yellow-orange, with the head and the black legs; they have the back of the blackish prothorax and two lateral rows of black plates along the abdomen. The Colorado beetle’s egg is ovoidal, about 1.6 mm, with a yellow-orange smooth corion. The laying of the eggs takes place with 20-40 cm ovations at a time on the lower page of the leaves. A female Leptinotarsa ​​decemlineata can lay up to 1000 eggs along the arc of its biological cycle.

Attitude and biological cycle –
The Colorado beetle of the potato is a holometabulum; the adults winter in the ground and emerge on the surface with ground temperatures at 25-40 cm of depth above 14 ° C. to mate the insect needs an average daily temperature of 16 ° C. The deposition takes place above all on the lower page of the leaves exposed to the east. From the eggs the larvae are born after a period of time between 4 and 15 days (subject to temperature and humidity), which completing three changes within 12-20 days, reach maturity; at this point they are allowed to fall to the ground where they pupate in an earthy cell at 5 – 15 cm of depth. The pupa period lasts 1-2 weeks, after which there will be first generation adults. Thus began the first cycle followed by the second generation and, in ideal conditions, also the third. The wintering adults can follow the biological cycle of the following year or, in some cases, go through a diapause of a few years. In order to be able to limit the people of the Colorado beetle, some agroecological measures can be followed.

Ecological role –
The Leptinotarsa ​​decemlineata carries out its biological cycle on the Solanaceae and above all on the potato (Solanum tuberosum L.); consistent attacks also occur on the aubergine (Solanum melongena L.) which is almost always a makeshift plant when the adults in summer abandon the residues of potato plants. Inferior are the infestations on the tomato (Solanum lycopersicum L.), on the pepper (Capsicum annuum L.) and on the spontaneous solanaceae as Solanum nigrum and Solanum dulcamara. The damage, caused by all the mobile forms, is borne by the aerial part of the plants that are completely defoliated; even if the plants do not die, reacting with new leaf emissions, this happens to the detriment of the production of tubers. One of the greatest vectors of this insect increase was the chemical struggle that caused an entomological selection in favor of the potato beiflora. In nature the Dorifora is controlled by several natural prassitoids including Edovum puttleri Grissel, which is a parasitic oyster-like hymenoptera whose female lays its eggs inside the Dorifora’s egg and is however only used for crops in a protected environment and by Bacillus thuringiensis ssp. kurstaki (EG2424 strain) and tenebrionis (specific), which are bacteria able to cause paralysis of the midgut of insects that ingest them.