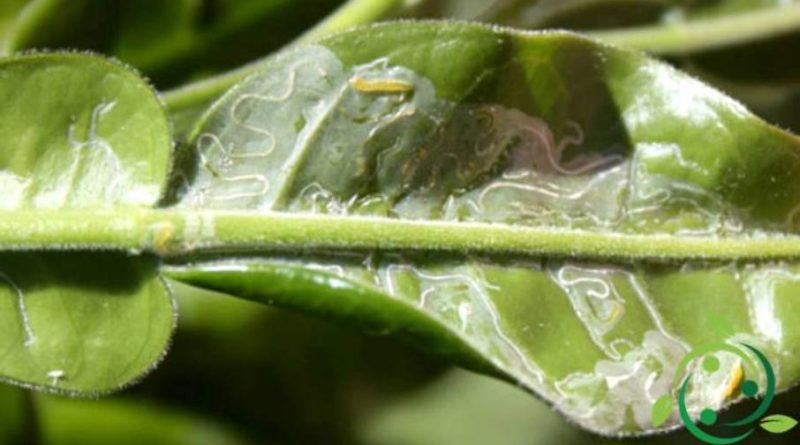 The Citrus serpentine miner (Phyllocnistis citrella Stainton, 1856) is an insect moth of the Gracillariidae family, cosmopolitan but arrived in Italy in 1994; its cycle takes place on all Citrus, but it can also attack plants belonging to other families, including: Oleaceae, Loranthaceae, Lauraceae, Leguminosa, Salicaceae and Tiliaceae. In this paper we will see how to apply the principles of biological control to the serpentine minature of citrus fruit. The serpentine mincer, in the larval stage, feeds mainly on the young leaves of the lemons and, to a lesser extent, also on other citrus fruits, digging tunnels (mines) on the upper side of the leaf. The Miner can dig tunnels also on buds and softer green branches. The damage, depending on the intensity of the attack begins with the curling of the leaves and the fall. The plant wastes and wastes a lot of energy (to the detriment of production); moreover, the plant is predisposed to attacks by serious disease agents such as dry mal and bacterial infections. The greatest damage occurs in spring and especially in autumn.

This insect starts to be very active especially when the night temperatures exceed 15 ° C and has a life cycle of about 15 days. The serpentine minature of the citrus fruit spends the winter in different ways and in spring, the adults lay their eggs on the flower buds of which the larvae will then be nourished. The second generation will be ready in about a month with the same technique of depositing parents. The containment of this insect, under the threshold of damage, starts from the preventive application of appropriate agronomic techniques and, subsequently, if there are the conditions for exceeding the damage threshold through the application of biological control systems. One of the major problems of the proliferation of this insect, as of others such as aphids, moths and cochineals, is the excessive use of nitrates in citrus crops that increases the vegetative capacity of plants, excessively softens the tissues making them more appealing to insects. The use of fertilizers or contributions of organic matter greatly diminishes the presence of the serpentine minature of citrus fruit. The second issue is related to the excessive specialization of agricultural production (including citrus fruit) that create very unstable agro environmental systems; the creation of associations (also arboreal), grassing, the presence of dry stone walls (where possible), etc. they create the best conditions for a rebalancing of the agroecosystem with a decrease in the virulence of these insects. It is recalled that in nature Phyllocnistis citrella is controlled, at the egg or larva stage, above all by various Hymenoptera Calcidoidei, among which the Ageniaspis fuscicollis, endo-parasitoid of the larvae, plays an important role. Also pruning techniques: plants too dense inside, poorly pruned and with excessive dry parts, etc. create better conditions for the nesting of this insect and therefore greater difficulty in its containment. The observation of these techniques may not completely solve the problem, also because an ecosystem may need several cycles before returning to normal conditions (provided that appropriate agro-ecological techniques are maintained).
However, if the first larvae are present in the months of May-June approximately, we recommend a cycle of treatments (to be done early in the morning) with “bacillus turingensis” to be repeated every three weeks, until September. Alternatively, products based on azadirachtin, neemazal or pyrethrum may be used which limit the proliferation of the moth. It should be noted that these active ingredients, even if permitted in organic farming, are not harmless for humans or for useful insects; therefore their use should always be followed by an agronomist. A definitely more biological solution is that of sexual confusion, using products based on pheromones that simulate the presence of female insects, which attract males into appropriate traps. But the most important fight may be that of the autumn period to prevent adults from winters for the following year. In this case, however, it is not necessary to intervene if at least 50% of the shoots have not been affected. If you exceed this threshold you can intervene with products based on zeolite that is effective against this Lepidoptera.