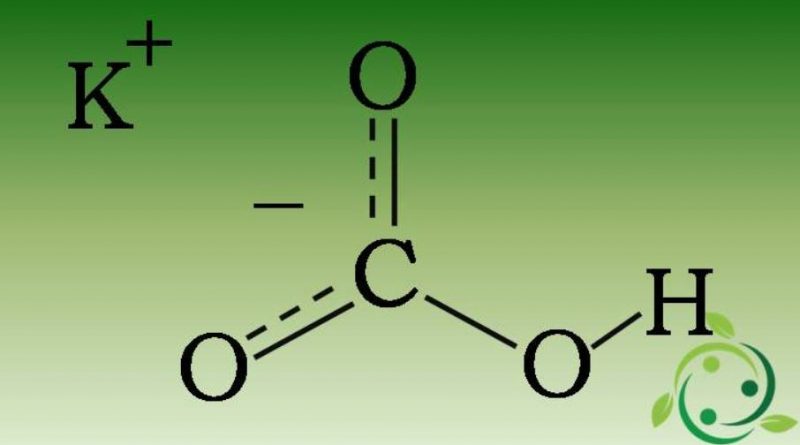 Potassium bicarbonate as a natural fungicide

The fungicidal treatments with synthetic products often involve an imbalance of the beneficial microflora of fungi, which above all play important symbiosis actions in favor of the plants in the soil. This change subsequently affects the plants’ ability to take nutrients with further systemic imbalances. The possibility of using agro-ecological techniques and less invasive active ingredients on the agro-environment can considerably solve these imbalances. Among the products with a very low ecological impact we remember the potassium bicarbonate, a salt that can perform, if well used, an important fungicide action without causing excessive damage to the microflora of the useful fungi of the soil. In this sheet we see how to use potassium bicarbonate as a natural fungicide, against which fungi and precautions in its use.

Potassium bicarbonate (KHCO3), also known as monopotaxic carbonate or potassium hydrogencarbonate, is a product of inorganic origin, i.e. a potassium salt of carbonic acid, with a slightly alkaline reaction. In nature it is present in the form of a white and odorless crystalline powder; it is highly soluble in water but insoluble in alcohol. The mineral present in nature is called kalicinite. Potassium bicarbonate is naturally present in plant tissues, in the soil, carrying out in itself a biological control of many plant pathogenic fungi. It is also a salt approved by the Codex Alimentarius for food uses and therefore as an additive for drinks or food; Ultimately potassium bicarbonate is a harmless product for both humans, pets and entomofauna and is absolutely environmentally friendly. For this reason it has been authorized by EEC Regulation 889/2008, as fungicide, and as a corrector of acid soils for use in organic farming. The principle of action of this salt is very simple; sprayed on the parts to be treated it modifies the pH (alkalizing it) creating unfavorable conditions to the growth of the mushrooms that need lower pH (acids). Potassium bicarbonate can be used against fungal attacks; among these it showed good efficacy against powdery mildew (Oidium spp.), apple scab (Venturia inaequalis), gray mold (Botritys cinerea), jewelries (Monilinia spp.), septoria (Septoria spp.) and elmintosporiosi of cereals (Helminthosporium sativum). Potassium bicarbonate should be used in a preventive manner to prevent the growth of these, through an inhospitable environment to these fungi. The mechanism of action is very simple; in aqueous solution this salt releases bicarbonate anions. An increase in pH is obtained with a consequent increase in the osmotic pressure of the leaf surface. In this way, therefore, adverse conditions are created for the development of fungal spores. Moreover, the increase in pH deactivates the enzymes responsible for the solubilization and expansion of cell walls and fungal spore membranes, and interferes in the development of the mycelium. It therefore also acts as a support for plants’ defense abilities against these fungal attacks.
The precautions for using potassium bicarbonate solutions are to not exceed the concentration of 0.5% to avoid phytotoxicity, and to avoid repeated use in the summer season. In fact, if we make excessive quantities of KHCO3, we increase the K / Ca ratio in the pulp; this can cause e.g. the susceptibility to bitter pock in the apple tree and, in the vine, poor production of anthocyanins. In addition, on sensitive varieties (as in the case of the Golden Delicious apple) burns and increased rustiness can occur. However, unlike its close seal (sodium bicarbonate), which performs the same action, it does not imply sodium accumulation in the soil, a chemical element that is harmful in the absorption metabolism of plants and in relation to the structure of the soils.