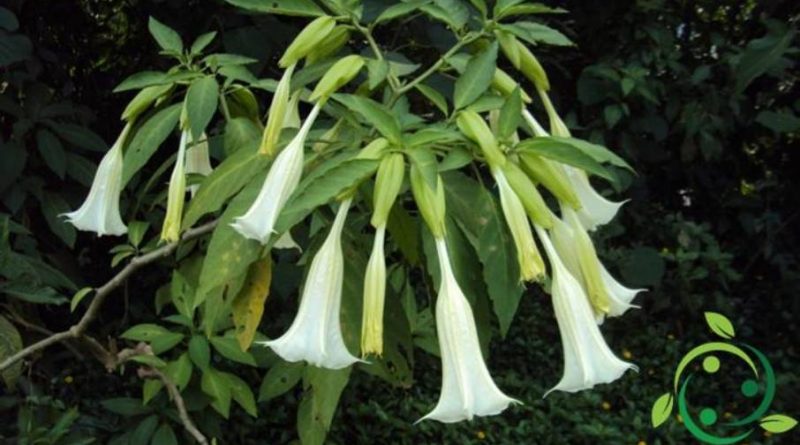 How to cultivate the arboreal stramonium

The arboreal stramonium (Brugmansia arborea (L.) Steud.), Also known as Trombone d’angelo, is a flowering arborescent species of the Solanaceae family. The leaves of this plant contain a high concentration of alkaloids among which the scopolamine which is a toxic substance and already the ancient Aztecs and Maya used seed extracts as hallucinogens. The stramonio arboreal is a tropical plant that is grown in our areas both in the garden and in pot for the beauty and the scent of its bell-shaped flowers, especially white. In this sheet we see how to cultivate the arboreal stramonium for ornamental purposes and the techniques to be adopted. It is a plant that can reach average heights of around 1.5 m (but it can grow even more) with an erect trunk covered with a light gray bark, with knots at times gnarled on which are inserted large lanceolate leaves of light green color covered with a thin down that forms a beautiful rounded hair.

The flowers are up to 30 cm long, campanulati, hence the name of Trombone d’Angelo, which during the day are hanging and in the evening they rise upwards. The flowering, with its characteristic citrus scent, is present throughout the summer. For cultivation, remember that the Brugmansia, given its origins, is better suited to warm or mild climates, in sunny areas, or even half-shade, but in places sheltered from the wind or sheltered by walls. Cultivating it in the north becomes quite complicated because it fears frost. It is a plant that adapts to any type of soil, with preference to those calcareous but preferably well endowed with organic substance and well drained. In case of cultivation in pots you must choose large containers. Regarding the water requirement, the arboreal stramonium has medium needs and should be irrigated only during the summer period; obviously those grown in pots should be irrigated during the summer every other day, then irrigation should be done only with the presence of dry earth on the surface. For the fertilization it is better to make organic substance, to be placed in the hole, before the plant and periodically mix with the superficial layers of compost or earthworm humus (avoid synthetic fertilizers, especially nitrogen and phosphorus); in pot you can use liquid fertilizers for indoor plants according to the doses and the periods indicated in the package or, better, make the residues of coffee grounds and egg shells to be crushed and mix before sprinkling them in the earth of the vase. Pruning, both in open field and in pot, should be done in the middle of May. It intervenes on dry or damaged branches and shortens the long ones giving a harmonious shape to the plant. The arboreal stramonium is a plant very sensitive to the attacks of some parasites; we especially remember the aphids, the cochineals (such as the cotonose), the white fly, the red spider, and leaf borers. If no nitric fertilizers are used these attacks decrease considerably; in addition to their first appearance they are excellent treatments with Marseille soap and decoctions of horsetail mixed together. The plant’s defenses are increased (also for fungal attacks) and it is an excellent solution against insects and mites. Among the fake diseases can be subject to radical rots for which it is enough to have it implanted in very permeable substrates to ward off this danger. Finally, a tip for those who cultivate plants, especially in the higher latitudes; the stramonio arboreo fear the frost and therefore those grown in pot should be repaired during the winter while those grown outdoors should be protected at the base with a mulch of straw or dry leaves. Of this plant are cultivated mainly some varieties: among which the Brugmansia aurea, the Brugmansia sanguinea and the Brugmansia suaveolens, with physiology and similar cultivation needs.