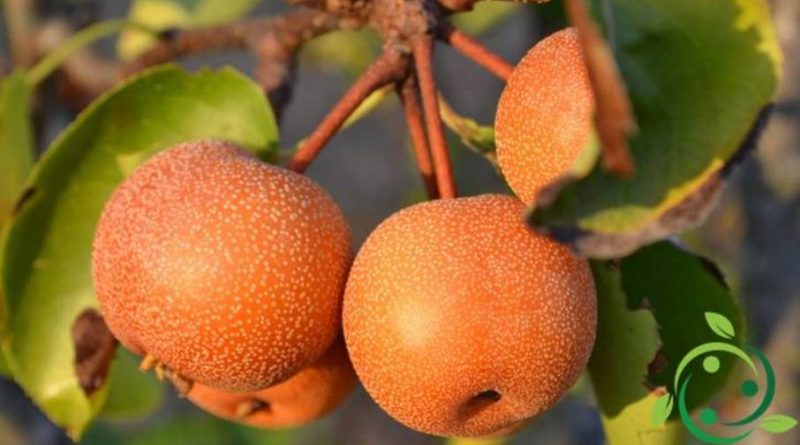 How to grow Nashi in a biological way

Nashi or Japanese pear (Pyrus pyrifolia (Burm.f.) Nakai, 1926) is a fruit tree of the Rosaceae family and the Pyrus genus, also known as pear-apple or Asian pear.
This widespread fruit in the countries of origin is less common in Italy. For this reason, in this sheet we see how to cultivate Nashi in a biological way in Italy and the most appropriate measures.
Nashi is a roundish fruit with a juicy pulp rich in water and minerals such as magnesium and potassium; It is crunchy and similar to the apple. The taste that differs from our European pears, a bit ‘flatter “, but equally pleasing and refreshing. It is also called “salad-pear”, because it is often used in fruit salads and in fact salads. It is however a fruit rich in fibers that help the natural functioning of the intestine and acts on the immune system and, due to its different content in sugars, does not affect the teeth with sugars and acids.

Nashi is also low in calories but rich in minerals, including iron, magnesium and potassium and a great source of B and C vitamins.
As for its cultivation, let’s say immediately that there are already interesting experiences in Italy; it is a fairly adaptable plant with modest claims, which can be cultivated in most of the Italian territory. It is a plant resistant to cold and needs a cold that makes it prefer in cultivations at higher latitudes where the average winter temperature should not rise above 6-7 ° C. Another characteristic of Nashi is that a plant is quite resistant to drought. For a good cultivation, however, it is advisable to use calcareous and high pH soil. For this reason a good supply in mature manure replanting, even in the hole where the plant is placed, allows a better assimilation especially of microelements and iron. As far as the sixth of the plant is concerned, we advise you not to fall below 4 x 5. The most used rootstocks for Nashi are Pyrus communis, P. pyrifolia or other species because, unlike the European pears, it is not similar to the grafts. of quince.
The interesting thing about Nashi is that it already bears fruit from the first year of age and to facilitate this you must have a good population of pollinators and flowering plants that attract pollinators and other pollinators like the sirfids. Another important technique for the good conformation of the fruits is that of thinning to allow also the proliferation of new buds.
Regarding the phytosanitary aspects, we remember that Nashi is quite resistant to pest attacks but is quite vulnerable to Carpocapsa.
An alternative to the anti-parasitic defense against the Carpocapsa is the coverage of apple trees with a normal anti-hail net that manages to significantly limit the attack of the carpocapsa. The network, in fact, disturbs the phases of flight, coupling and oviposition of the insect, so there is no normal occurrence of larvae. The network must be implemented from the end of flowering to harvesting time and, of course, also serves as protection against apple trees against hail. In addition, treatments can be performed in the initial stages with Neem oil.