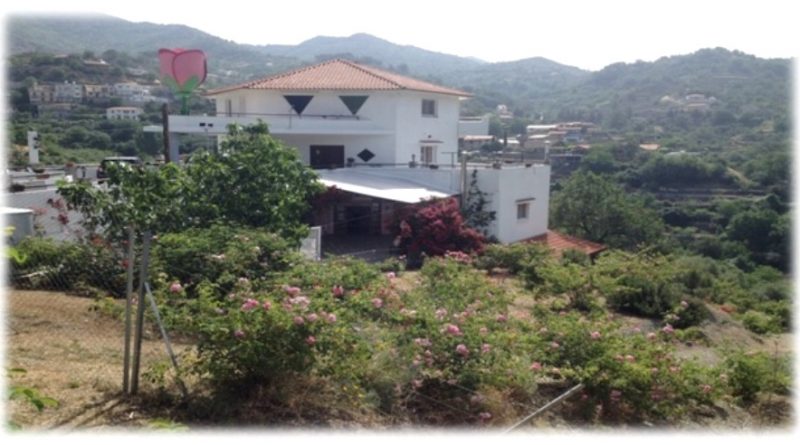 Agros is a village built on the mountain of Troodos, in the Pitsilia region, southwest of Cyprus, built in the shape of an amphitheater, it stretches along the mountain at an altitude of 1100 m with a population of about 1000 inhabitants. The village of Agros is famous for the distillation and cultivation of roses, as well as being a tourist attraction for the various events one of which is more important The Festival of the Roses which takes place over two weekends in May each year and organized by the community of Agros.
La Rosa is one of the most revered symbols since the pre-Christian era, also used in ancient Rome as a symbol of devotion to the Goddess Venus. There are more than 7000 varieties of roses in the world, some of these known as oil roses from which quality Rose water is produced. In the village of Agros only one type of very fragrant rose is cultivated which has long been used for the famous rose water. Rose water that is produced from the rose variety “Damaschina or rosa damaschina” type of rose that is no longer found in the wild state mah in the various crops. Belonging to the Rosaceae family. Because of its sweet fragrance it is also used for beauty products and perfumes.

Rosa Damaschina or Damascena has been synonymous with Agros for almost 100 years. It reaches a height of 1.5-2 meters and its leaves are composed, egg-shaped and piliferous in the lower part. The thorns are particularly dense, the twins have a pale pink color and the flower has a particularly strong fragrance. It blooms from April to May. As in all the Mediterranean countries, the Rose of Damascus grows in the bushy lands on the roadsides, at the foot of the mountains, protected from strong winds and frosts.
The Agros Ltd Rose Growing Cooperative is located in the center of the village, also known for the good smell of roses in that area, from where the famous Agros rose water is produced. In 1971 Nearchos Clerides was a teacher in the small village of Agros, he had the idea to expand cultivation in the community by founding “Association of students for the diffusion of the rose bushes”, the members of this association had the obligation to cultivate and treat 50 rose bushes every year.
Those who went beyond the fifty bushes received a financial reward.
It began to produce rose water in 1918 at the school for young Agros. The question began to grow among the residents seeing the benefits that rose water brought to them.
From 1961 until today, the distillation and production of rose water is followed by the Rose Growing Cooperative of Agros Ltd. The company cooperates with 100 producers / members who only grow the variety of rose damaschina in the Agros area. In the period of production / cut of the roses 15/20 tons are reached by all the members, through specific process they will be subsequently transformed in rose water, the cut of the roses happens by hand, in the early hours of the morning otherwise a loss of the contained oils. The flowers collected together with water are placed in a distiller with a capacity of 600 kg of roses at a pressure of 4 bars and a temperature of 20 ° C where water is gradually added for a total of 200 m3. After the distillation process, the rose water is deposited in some tanks from which it is subsequently bottled, in the process no chemical substances are added. From laboratory analysis it appears that rose water contains antioxidant substances, with anti-inflammatory and antiseptic characteristics, improving properties of the immune system that have made the use of rose water important. The company, seeing the benefits of rose water, has diversified its production with beauty products and traditional sweets, under the name of Agro Rose Products.
The company has consciously chosen organic farming methods to avoid the use of other chemical ingredients that are compromising and harmful to humans and nature. ” Chris N. Tsolakis LTD – Venus Rose Cosmetics ” produces organic cosmetics that do not contain synthetic perfumes.
Andria and Elena, the daughters of Tsolakis, were incorporated into the family business “Chris N. Tsolakis LTD – Venus Rose Cosmetics”. Above all the love for roses, pushes both sisters has to establish new goals and perspectives for a future of family tradition development.

Products and their respective properties:
● Rose cosmetics contain essential oils of rose and rose (Damascena rosa) and are used to protect the skin from the harmful effects of free radicals.
● Rose water has anti-inflammatory properties that can help soothe irritation. It also includes antioxidants and can moisturize the skin. Rose water can relieve constipation, can purify the blood and improve the mind’s positivity.
● The flavonoids present in the rose plant show antidepressive properties. The plant extract has been scientifically proven to reduce beta β amyloid, which is the pathological cause of Alzheimer’s disease. The oil also contains useful components such as eugenol and geraniol, which are well known for its antiepileptic effects.
● Rose oil can be used to treat nausea, ulcers, dehydration, urinary tract infections, colon and stomach. However, it is used in combination with other compounds like grapefruit and almonds.
● Tea made from rose petals can improve the secretion of bile in the liver and help clean the gallbladder. In addition, it can also reduce the symptoms of bronchial infections and sore throats.
● Rose Jam (Rose Jam) considered as an Ayurvedic tonic, it is used to treat many diseases such as excess heat in the body, inflammation of the eyes, acid symptoms in the stomach, etc.
● The beneficial components found in rose plants are flavonoids, anthocyanins, terpenes and glucosides. They exhibit antioxidant, antidepressant, anti-inflammatory and anti-tumor properties. In addition, they act as free radical scavengers. Vitamins in the rose are Vitamin E, Vitamin D, Vitamin C, Vitamin A and Vitamin B3.
● Rose essential oil can calm a patient with high fever by sedating inflammation. It can also be useful in other cases of inflammation caused by microbial infection, ingestion of poisonous materials, indigestion and dehydration. This can lead to a reduction in the associated conditions such as rheumatism, arthritis and fever.
● Rose tea is rich in antiseptic, anti-bacterial, anti-inflammatory and anti-oxidant properties. Antioxidants in it effectively eliminate imperfections, leaving you a soft, smooth and luminous skin that appears visibly young. Drinking rose petals tea has a positive impact on balancing stress and emotional hormones by calming the nervous system. Tea has antidepressant and tranquilizing properties.