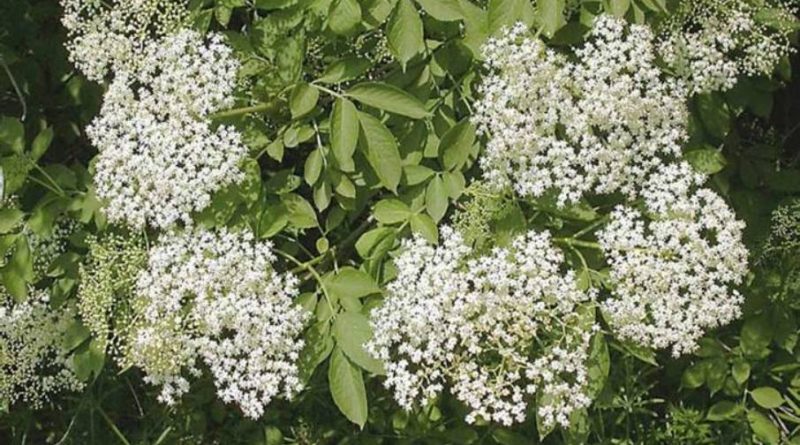 The common elderberry (Sambucus nigra L.) is a dicotyledonous angiosperm of the Adoxaceae family, widespread in Italy especially near the ruins, humid woods and along the banks of watercourses.

Systematics –
The common elder from the systematic point of view belongs to the Domain Eukaryota, Kingdom Plantae, Division Magnoliophyta, Class Magnoliopsida, Order Dipsacales, Family Adoxaceae and therefore to the Genus Sambucus and to the Specie S. nigra.

Etymology –
The name of the genus has origins from the Greek “Sambike”, referring to a musical instrument that was made with the branches of the elder emptied of the marrow, in turn of oriental origin, originally name of a stringed musical instrument, which indicated in followed by wind instruments; the specific name derives instead from the Latin “niger” = black, referring to the color of its drupes.

Geographic Distribution and Habitat –
Sambucus nigra is a typical plant of the clearings, at the edge of the damp woods, slopes, along the walls and rubble, quickly entering as “infesting” in the most anthropized and urbanized environments. It likes soils fresh and rich in nutrients and decomposed organic matter. It can be found from sea level up to 1,400 m s.l.m. 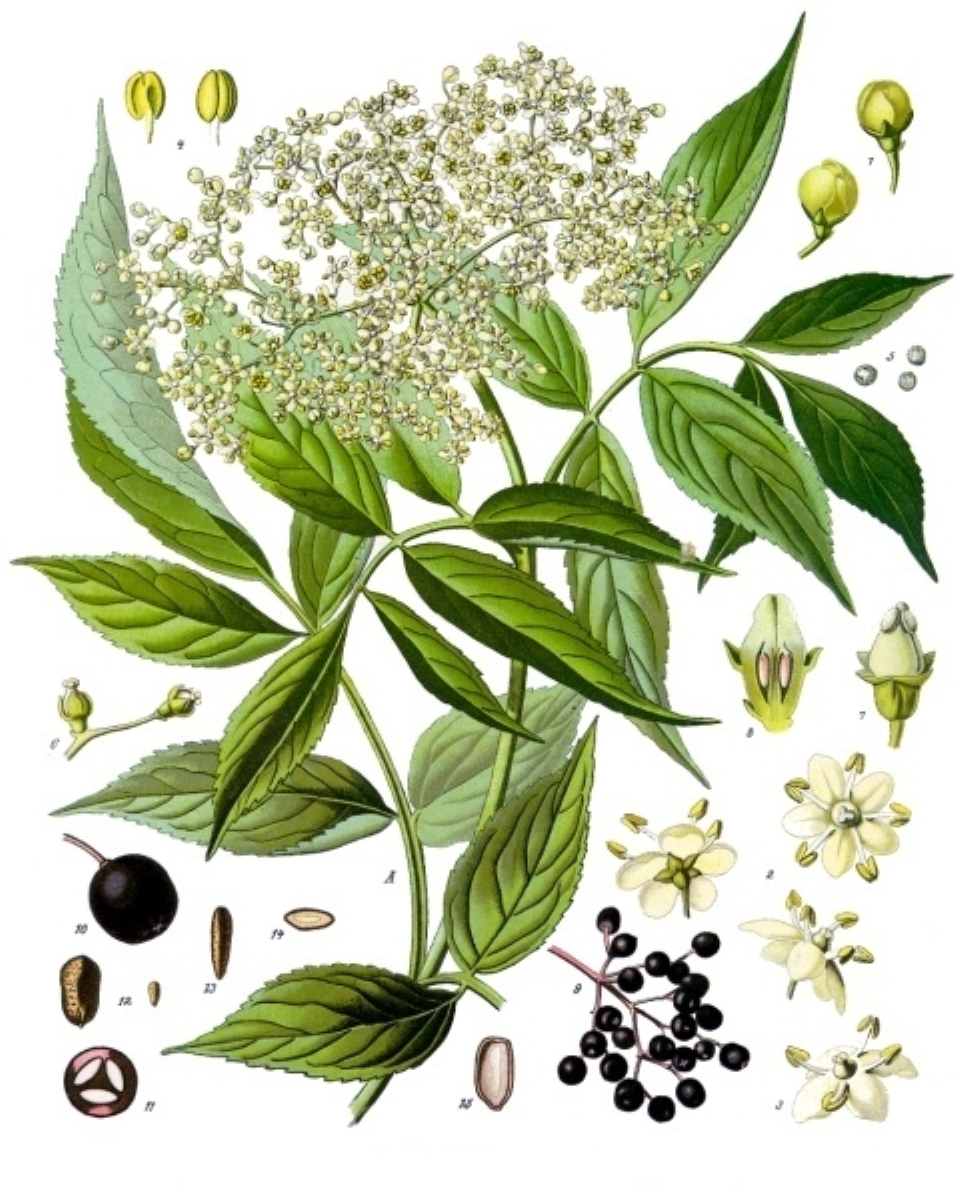 Description –
The common elderberry has a woody and perennial shrubby habit; deciduous and broad-leaved plant, high around 4-6 m. The leaves are composed, of a dark green color of 10-30 cm, are imparipennate with a serrated-serrated edge; the shape of the leaves is lanceolate with a sharp apex, the phyllotaxis is opposite. The flowers of the common elderberry are hermaphroditic and carried in very showy corymos of a creamy white color, of 10-23 cm. Each flower is made up of 5 petals fused at the base (gamopetal flowers), the chalice is with a stem oval and 4 protruding stamens. The flowering of Sambucus nigra occurs in the period of April-May, while it bears fruit, with shiny blackish berries (and with a small and poisonous seed) in July-August. The flowers and berries are however edible.

Cultivation –
It is not a plant that is normally cultivated but its introduction can be interesting both for ornamental purposes and for medicinal-herbal uses. Obviously it is a very rustic plant that adapts to moist soils but tends to be infesting.

Uses and Traditions –
Sambucus nigra has medicinal and herbal properties both in fruits and flowers. The rest of the plant, however, including the seeds, is poisonous because it contains the presence of glycoside sambunigrina (C14H17NO6, CAS No. 99-19-4). Extracts of the bark, leaves, flowers, fruits and roots used to treat bronchitis, coughs, and infections of the upper respiratory system and fever were used, above all in the past.
As mentioned, the plant is also used for ornamental purposes; from the trunk it is obtained a hard and compact wood that is used as fuel or for work on the lathe. Once upon a time the wood of the young branches is tender and fragile and was used to forge musical instruments, having inside a cavity formed by a spongy substance.
Another interesting use is to obtain from the berries and, therefore, their fresh or fermented juice, inks that, depending on the species, the conditions of the plant and the recipe, can be blue, dark blue, brown, lilac. , red.

Preparation Mode –
Sambucus nigra is used as an aroma to make “bread with elderberry”. With the flowers of this plant you can make a syrup, to be diluted with water, to obtain a thirst-quenching drink, widely used in Tyrol and in the Nordic countries. This fermented beverage produces a kind of sparkling wine. The syrup instead also enters the preparation of cocktails, such as Hugo.
The flowers of the common elderberry are edules; in some parts areas of Italy are prepared with these fritters, or made with batter and fried. Even the berries are edible (but only after cooking) and are used both for jellies and jams, which however have laxative properties. In northern Germany, berries are also used to prepare sweet soups, such as Fliederbeersuppe.