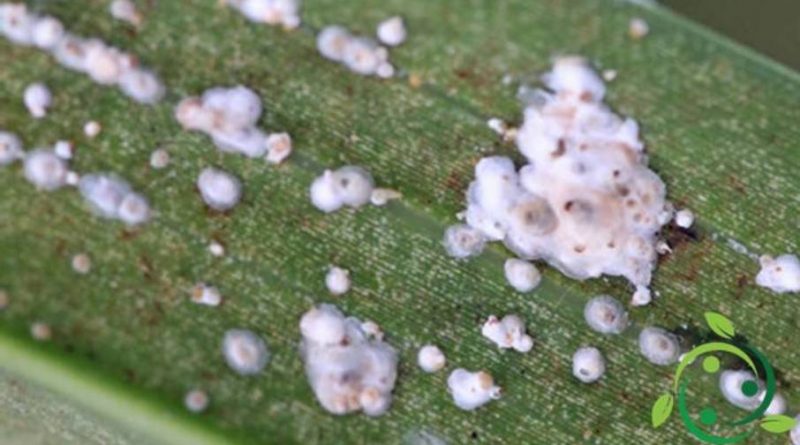 How to fight the white lemon cochineal in a biological way

In this tab we will see what the criteria are and how to fight the white lemon cochineal in a biological way. The white lemon cochineal (Aspidiotus nerii Bouché, 1833) is a phytomizous insect of the order Rhynchota Homoptera Sternorrhyncha (superfamily Coccoidea, family Diaspididae). This cochineal widespread in the areas of the Mediterranean basin, attacks mainly citrus fruits and in particular the lemon. However, being polyphagous species we find it also on other plants, outdoors and in greenhouses: olive, aucuba, ivy, oleander, palm, acacia, agave, carob, asparagus, etc. .. The females and nymphs of the 2nd age are enclosed in a protective follicle made of silk, wax, excrement and exuvia of the previous pre-imaginal stages, round, about 2 mm long, is light hazelnut color, with yellow exuviae placed in the center. As for the male follicle, this affects only the neanids of the second age; it is smaller than the feminine one and is of a pure white color with a slightly oval shape.

The biological cycle of the Aspidiotus nerii is characterized by 3-4 annual generations and spends the winter period in various stages of development but with a predominance of unfertilized female. After the winter and with the beginning of spring the females are fertilized by the males; begins immediately after the deposition of 50-100 eggs. Neanides are generated so that when they reach maturity they generate the 2nd generation, with the appearance of the nymphs in July. Then follow the 3rd generation, with the birth of the nymphs in September, and in the warmer places an eventual 4th generation.
The white lemon cochineal generally attacks branches, leaves and fruit, causing a general deterioration of the plant. this cochineal is found mainly on the lower page of the leaves, being able to cover it completely. The damage is due to the suction of plant juices and is manifested by yellowing, desiccation and phylloptosis. When, after massive damage, it hits the lemon fruits (sometimes forming very evident deposits), they are struggling to grow with great commercial depreciation. The depreciation is also due to the fact that in the surrounding areas the points of settlement of the cochineals remain green and stand out strongly on the ripe fruit.
The defense from this parasite starts from good agronomic techniques such as ventilating the plants well inside, to avoid nitrogen fertilizers as much as possible (which generate tissues very much favored by these insects), performing grassing and creating hedges that they promote the proliferation of antagonists. As with all cochineals, specializations, especially on large extensions, are a real problem in biological struggle. Another important technique is to wash with 1-2% white oils, at the appearance of mobile nymphs. We remind you that even water-based washes with additions of Marseille soap, carried out periodically (depending on the degree of infestation), play a very important role in their containment. We remind you of the trick of directing the sprayer jet from the bottom upwards. Among the antagonists we remember numerous parasitoids and predators. Among these we remember several Coccinellida Coleoptera, such as Chilocorus bipustulatus, Exochomus quadripustulatus, Lindorus lophantae and Scymnus spp .. Among the parasitoids play an important role the Hyaluronic Hyaluronic Hymenopterans such as Encarsia citrina (syn .. Aspidiotiphagus citrinus), and Aphytis spp. ectofagi.