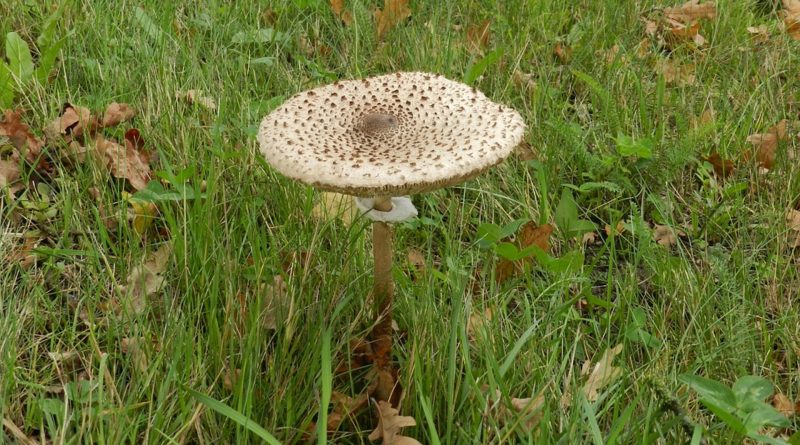 The drum club (Macrolepiota procera (Scop.) Singer, 1948), known in various ways, such as puppola, bubbola maggiore, parasol or parasol, capeon, ombreon and other dialectal names, belongs to the family of the Agaricaceae.

Systematics –
From a systematic point of view it belongs to the Eukaryota Domain, Fungi Kingdom, Basidiomycota Division, Agaricomycotina Subdivision, Class Agaricomycetes, Sottoclasse Agaricomycetidae, Order Agaricales, Family Agaricaceae and therefore to the Genus Macrolepiota and to the Specie M. procera.

Etymology –
The etymology comes from the Greek μακρός macrós grande and from the genus of large Lepiota mushrooms; the word procerus comes from the Latin instead means slender, tapered.

Geographic Distribution and Habitat –
Macrolepiota procera often lives gregarious indifferently in deciduous or coniferous woods, as in meadows, clearings and on the roadsides. It is an often gregarious mushroom and is widespread both in North America and in Europe. Its presence in the woods is both summer and autumn. 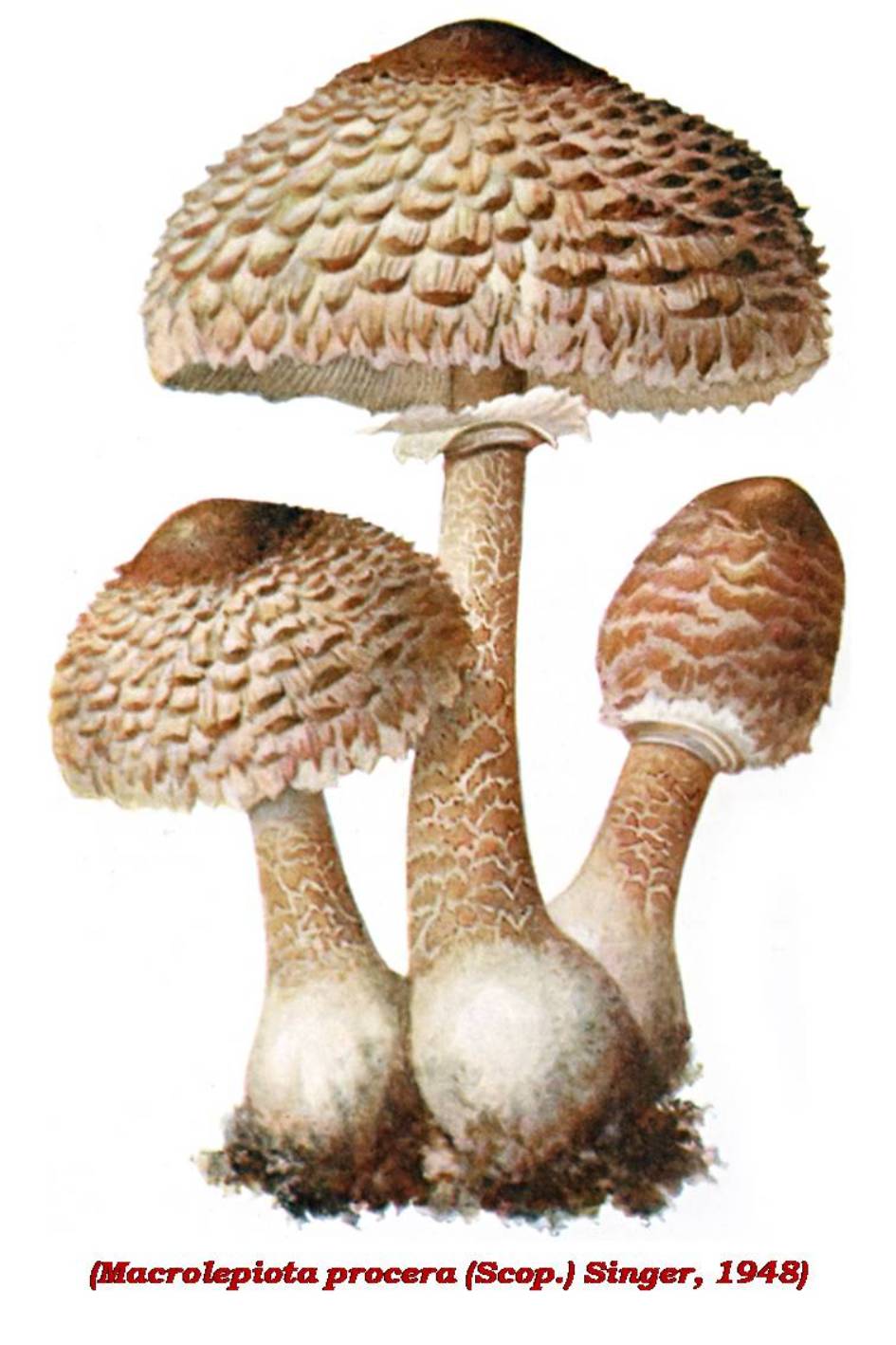 Description –
The drum mats are among the most showy mushrooms known and appreciated above all for their edibility. But we must be careful of its raw toxicity (a feature not known and common to other congeners) that is the cause of not infrequent poisoning.
The hat of the drum club is spheroidal when young, then becomes convex and matured at maturity; this is endowed with brown or brown-gray umbone, smooth in the middle and then covered with flaky scales and brunettes, with a characteristic radial arrangement, more and more sparse towards the fringed margin. The cuticle of this mushroom is hazelnut-whitish, fibrillose and silky. The size that can reach ranges from 10 up to 25 cm. It has thick, numerous, irregular and white or yellowish lamellae which then become pinkish-brown or powdery and darkish to the touch. These are ventricose and tall and show an obvious detachment from the stem. The shank of the drum is very slender and thin, its dimensions can be 20-45 cm x 10-20 mm, of almost constant diameter, it is normally straight, fibrous, hard, hollow and cylindrical. The stem is bulbous at the foot with a double, sliding and wide ring. Below the ring, the characteristic and evident coffee-colored scaling is visible.
As for the meat, this is white, tending to rosy or reddish to the cut, flocculent, tender, inconsistent and fragile in the hat, is fibrous (almost woody) in the stem for which this is not edible except in those very young that but they must never be collected. The smell of the meat tastes like hazelnut and the taste is sweet and nutty.
The macrolepiota procera spores are white in mass, hyaline, smooth, elliptic and large (dimensions of 12-18 x 8-12 μm) and have a small germinative pore. The cheilocystides are 40 x 12 μm, clavate or cylindrical.

Cultivation –
There is little information on cultivation on the drum club; this species of mushroom in fact appears to be very widespread throughout Italy and therefore easy to find in open spaces, clearings and deciduous and coniferous woods where it makes its appearance from the beginning of summer to late autumn growing in large groups and rarely in single specimens. The general advice is however to use the substrates common to other saprophytic species (logs of soft or hard wood, straw, sawdust and pre-composted plant residues).

Uses and Traditions –
The drum is an excellent mushroom from the point of view of edibility to be used exclusively only the hat. It is suitable for the preparation of cutlets, when the hat is totally open and with the lamina still white, while with the younger specimens (not yet open) you can prepare tasty omelettes.
We still remember that it is a slightly toxic mushroom from raw, which requires prolonged cooking, so it is absolutely necessary to avoid the preparation to the plate or the grill, because the internal parts could remain partially raw.
With regard to the possibility of drying them spontaneously, these are more aromatic and should have lost their toxicity; in any case it is always good to consume them after cooking.

Preparation Mode –
Before switching to the preparation method, it is emphasized that for other fungal species, after the firing the “yield” is not very high because the hats – even if of enormous size – are considerably reduced in width.
Before being cooked, the drum sticks must be completely cleaned: the first step is to wash them with great care, using only a jet of cold water, rinsing well the part under the chapel, where the residuals are often found of earth and some insect. The mushroom must then be separated from the stem, which (if not too woody) must then be divided into two and dried with a cloth. The chapel should instead be left to dry on its own.
One of the easiest and most widespread recipes is of Bolognese origin, and consists of frying the drum sticks, after having breaded them. The ingredients you need to use, for four portions, are eight chapels of drum mats, two eggs, two hundred grams of Parmesan, one hundred grams of breadcrumbs, lemon juice and a pinch of salt. After you have thoroughly washed the mushrooms, or rather the chapels, you have to break the eggs in a bowl, and start to beat them, using a fork. Add the grated Parmesan, but be careful: to add it to the eggs perfectly, it is recommended to add small doses and beat the eggs, so that lumps do not form that could ruin the cooking of the mushroom. Once you have poured all the Parmesan, adjust the eggs with a pinch of salt, and continue to beat them, so that the salt is perfectly combined with the mixture. At the same time, pour the grated bread into a bowl, trying to completely fill the whole container in which you place it. Now you have to take every single mushroom cap, and bathe it with egg, salt and grated cheese: absolutely try to pay the utmost attention by doing this type of operation, given that if you wet the mushroom a little, the breadcrumbs will not stick. If you wet it too much, the mushroom may not cook properly, and become too breaded. The mushroom must then be breaded: place it lightly on the breadcrumbs, turning it so that it is completely breaded, and if the amount of breadcrumbs is too much, remove the excess with a fork. Place an average amount of olive oil to heat, and when this is hot enough, simply put the mushrooms to fry. This operation should last for a few minutes: turn the mushroom repeatedly, so that it cooks on both sides, and the breading does not burn. Once cooked, place them in a dish, which must be covered with kitchen paper, so that the oil is absorbed: add a pinch of salt and pour a small amount of lemon juice.
Drum meats can be grilled, or even roasted (but make sure all the meat is cooked), or you can cook them in the oven after having them stuffed with minced and sliced ​​meat, or you can use these mushrooms for seasoning saffron risotto. With drummeat mushrooms you can also prepare excellent sauces and sauces, useful for seasoning pasta, such as tagliatelle, as they can be preserved in oil and used later.
Instead, as mentioned, to avoid eating them raw: these mushrooms in fact have a medium poisonous potential, and if taken in large quantities may cause mild or moderate intoxication, with stomach pains, nausea and diarrhea. Even grilling them is not recommended, since they could remain areas of the fungus, such as those of the chapel or the lamellae, which would cause an intoxication.