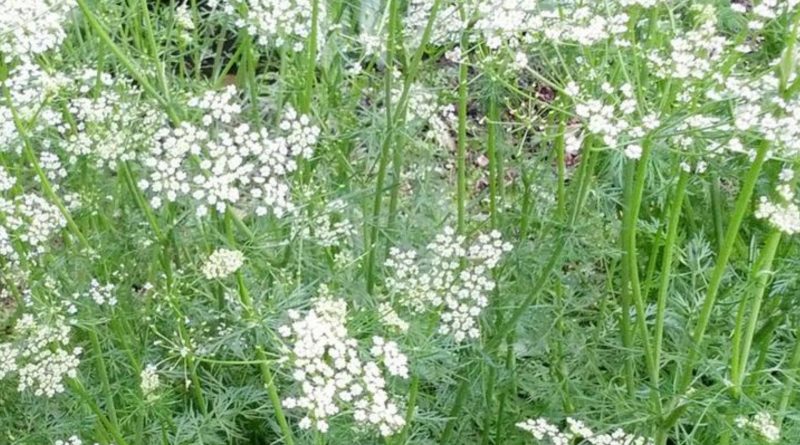 Systematics –
From a systematic point of view, cumin belongs to the Eukaryota Domain, Kingdom Plantae, Magnoliophyta Division, Magnoliopsida Class, Apiales Order, Apiaceae Family and then to the Cuminum Genus and to the Species cyminum.

Geographic Distribution and Habitat –
This plant appears to originate in an area that runs from Syria, where cumin grows in hot, dry soils, and Egypt and Central Asia in any case. Cumin seeds have been found in some ancient Syrian archaeological sites. The spread of cumin, through Turkey and Greece, occurred even before the Arab domination in Spain in the fifteenth century. Later this plant has also spread to the American continent. Today it is widespread throughout the Mediterranean area and enjoys a warm and sandy, calcareous, rather arid soil. 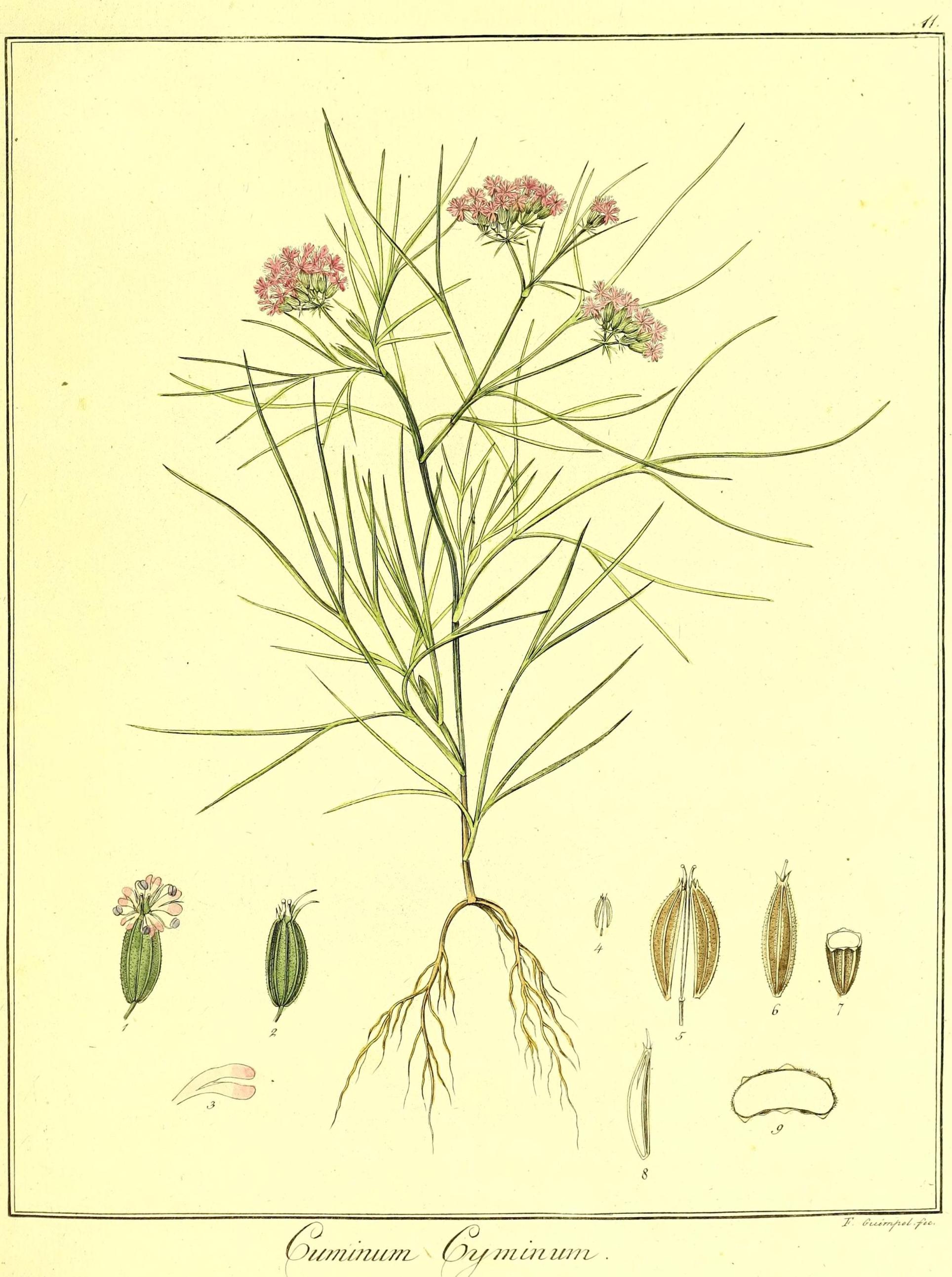 Description –
The cumin plant is characterized by having a thin and branched stem 20-30 cm tall. The leaves vary from 5 to 10 cm and are arranged in a comb. It has small flowers, white or pink, and arranged in an umbrella (hence the term Umbelliferae). The fruit is an ovoidal-fusiform lateral achenio, 4-5 mm long, with a single seed. Cumin seeds resemble those of fennel or green anise, but are smaller and darker in color. This plant can be confused with caraway, which has similar fruits but with a completely different aroma.

Cultivation –
Like all spontaneous plants, cumin can also be grown and to do this we must know that this plant lives well in full sun in positions sheltered from the winds. Cumin cultivation requires a long and warm summer, which lasts 3-4 months, with daytime temperatures around 30 ° C; it tolerates drought, and is cultivated mainly in Mediterranean climates. In places where the climate is cold, the cumin must be sown late, when the temperatures are permanently mild, ie around May. Otherwise it can also be sown at the beginning of spring. Apart from the normal operations of thinning the seedlings, weeding the soil and irrigation (if the summer is drought) the cultivation of cumin does not require special care. As for the harvest, the period is from July to September depending on the cultivation area: the umbrellas are harvested when they begin to turn yellow, before they reach full ripeness and disperse most of the seeds. To complete the maturation immediately after harvesting, the fruits should be exposed to the sun for a few days by suspending them upside down over a cloth where they will collect fallen seeds. For storage it is important to bear in mind that ripe, well-dried fruits are kept in airtight boxes.

Uses and Traditions –
Historical documents and findings tell us that cumin has been used since ancient times. The seeds, found in the Syrian site of Tell ed-Der, are traced back to the second millennium BC. moreover, findings have been made concerning the age of the New Kingdom of Ancient Egypt. The cumin was also used a lot, in the kitchen of ancient Rome.
This plant was originally cultivated in Iran and in the Mediterranean regions. Cumin is mentioned in the Bible, both in the Old Testament (Isaiah 28:27) and in the New Testament (Matthew 23:23). The cumin was known and used also in ancient Greece and in ancient Rome. Do you think that the Greeks kept it at table, in a container, a little like today with pepper; this custom is still maintained today in Morocco. Subsequently since the Middle Ages, in Europe, this spice became less and less used (with the exception of Spain and Malta).
Some traditions are interesting and curious; for example. in the Middle Ages a superstition wanted the cumin to stop the chickens, and the lovers, from running away. It was also believed that the spouses who had brought cumin seeds with them during the wedding ceremony would have had a happy life. In South Asia, cumin tea (seeds dried and boiled in water), is used to distinguish stomach swelling due to gases, from a real pregnancy. In Sri Lanka it is instead used toasting seeds, then boiling them in water and to prepare a tea that is used to calm serious stomach problems.
The main constituent of the cumin, which gives the particular aroma, is the cuminaldehyde. Other important components of the roasted cumin aroma are the substituted pyrazines: 2-ethoxy-3-isopropylpyrazine, 2-methoxy-3-sec-butylpyrazine and 2-methoxy-3-methylpyrazine.
Cumin seeds are a good source of iron and are traditionally considered beneficial for the digestive system, and scientific research is beginning to rediscover the ancient reputation of cumin in this sense. These studies have shown that cumin can stimulate the secretion of pancreatic enzymes, which are necessary for proper digestion and assimilation of nutrients.
Other research shows that cumin could also have anti-carcinogenic properties. In one study, cumin showed to protect laboratory animals from the development of tumors of the stomach and liver. This effect could be due to the powerful cumin capacity in free radicals purification, as well as to the ability shown in stimulating enzymes that detoxify the liver.
According to tradition, cumin is also considered to help in the treatment of colds, if added to warm milk. In herbal medicine, cumin is classified as a stimulant, carminative, and antimicrobial.

Preparation Mode –
The cumin has a characteristic bitter taste and a strong and sweetish smell thanks to the high content in oils. It is mainly associated with Indian cuisine and with other exotic cuisines (North African, Mexican) and may be present in the curry. However, its use is very widespread in Spain, especially in the cuisine of the south-east of the Iberian peninsula and in the German-speaking territories. Cumin seeds are used as a spice for their particular aroma, especially in North African, Middle Eastern, Xinjiang, Indian, Cuban and Northern Mexican cuisine.
Cumin can be found in some Dutch cheeses, such as Leyden cheese, and some Val d’Aosta (in Valle d’Aosta the plant grows wild) and in some types of French homemade bread. It is also commonly used in traditional Brazilian cuisine. Cumin is also an important component of chili powder, and is found in the mixtures of annatto, those for soffritti, garam masala, curry, and baharat.
In any case, in the kitchen, cumin can be used to season many dishes, both in the ground form and with whole seeds, since the natural sweet taste can also be extracted from them. While for sauces it can be added to give an extra flavor; for the authentic Mexican guacamole it is an essential ingredient. Cumin has also been used on meat, in addition to other seasonings.
In addition, the cumin is used to flavor dishes based on cabbage and potatoes, meats and fresh cheeses.
The ripe fruits of well-chewed cumin fight halitosis; the infusion (about ten grams of cumin in about half a liter of water) exerts a digestive, antispasmodic and sudoriferous action.