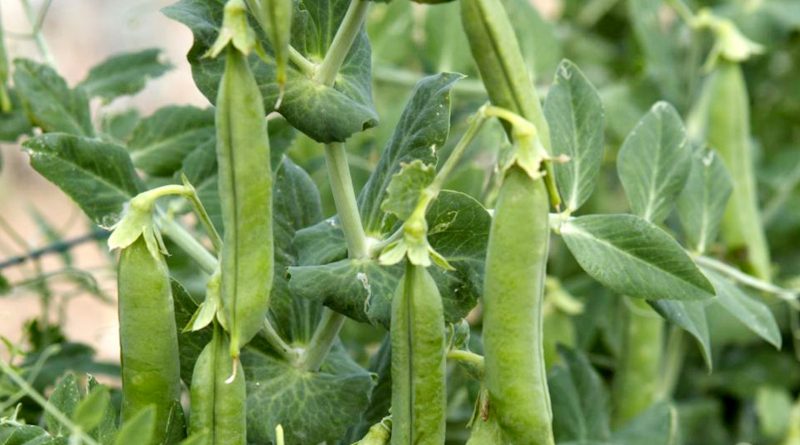 The pea (Pisum sativum L., 1753) is an annual herbaceous plant, native to the Mediterranean and Eastern area and belonging to the Fabaceae family.

Systematics –
From a systematic point of view, the pea belongs to the Eukaryota Domain, to the Plantae Kingdom, Tracheobionta Subarrange, Spermatophyta Superdivision, Magnoliophyta Division, Magnoliopsida Class, Rosidae Subclass, Fabales Order, Fabaceae Family, Faboideae Subfamily, Vicieae Tribe and then to the Pisum Genus and to the Species P. sativum.

Etymology –
The name of the genus Pisum is the name by which the plant was named in antiquity and its origins are uncertain. The specific epithet Sativum means “cultivated”, indicating that the species has been selected and cultivated since remote times.

Geographic Distribution and Habitat –
Pisum sativum is a native species of the Mediterranean and eastern area; it grows in the altimetric range between 0 and 1500 m s.l.m .. It prefers grassy areas, uncultivated, at the edge of the coppices. 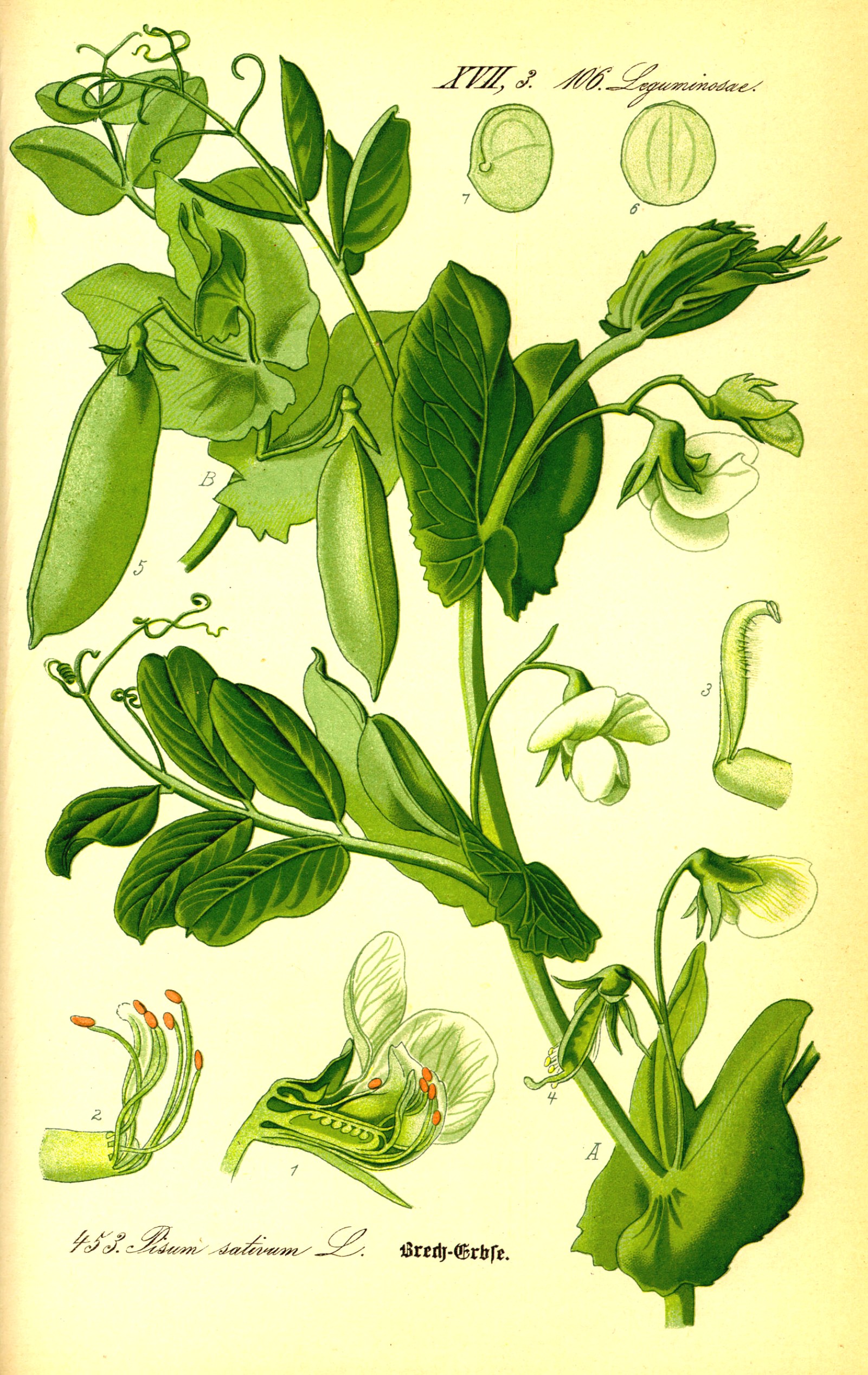 Description –
Pea is a glabrous, glauca plant with dimensions between 40 and 100 cm in height; has a cylindrical prostrate or climbing shaft. The leaves of this species are paripinnate, with 2-6 oval leaves, green-glaucous, dented amplessicauli at the base, rachis ending in a branching cirrus; the inferior minors, the major medians. It has stalks longer than stipules. The flowers of this plant are 2-3 cm in size, pedunculated, green calyx with 2 ovate-lanceolate upper teeth and 2 lower lanceolate teeth, corolla with dark purple-black wings and violet flag, bilobo. The fruit is a 5-7 cm legume, with globose seeds of 3-5 mm (much smaller than horticultural peas), dark brown-black or mottled.

Uses and Traditions –
The oldest finds of Pea date back to the Neolithic, and it is likely that the culture has arisen simultaneously in many parts of Southern Europe and Western Asia (remains of both wild plants and cultivated plants, have been found in numerous archaeological sites of the Neolithic .). This plant is widely cultivated for its seeds, consumed as food or used as food for livestock. The term also refers to the seed of the plant, rich in starches and proteins that range between 16 and 40%.
In antiquity and in the Middle Ages it was a staple food in Europe and in the Mediterranean basin. In our days, its cultivation is practiced on the five continents, particularly in the temperate regions of Eurasia and North America.
This plant, together with some cereals (spelled, wheat, barley) and other legumes (vetches, lentils and chickpeas), was one of the first species of domesticated man when, about 8000 years ago, in the Fertile Crescent region, ‘agriculture. Later, the culture spread westward in Europe and eastward to India.
The cultivation of peas in Antiquity was practiced by the Greeks and Romans, as is clear from the quotations of Theophrastus in his Historia Plantarum (III century), Lucio Columella in De re rustica and Pliny in his Naturalis historia, written around the year 77 of our era. Under Charlemagne, peas are cited as pisos mauriscos among the vegetables recommended in the Capitulare de villis. The dry peas, easy to preserve, constituted in the Middle Ages one of the main food resources of the poor classes, often cooked with lard. Towards the end of the XIV century, a dwarf variety was selected at the Medici court to be eaten fresh, the so-called “new peas”. In 1533, when Catherine de Medici married Henry II of France, the young peas were introduced to France. The gastronomic novelty was a great success and was renamed “petit pois”, a name that has come to this day. The popularity of the “petits polis” reached its climax under the reign of Louis XIV, becoming the object of a real gastronomic fashion.
Dry pea is a traditionally important food in some countries, particularly in the Indian subcontinent and in Ethiopia, but it is relatively disused as a starchy and as a source of protein in most western countries, where it is now mainly cultivated for animal feed or for export. After the seventeenth century, the pea has become a popular fresh legume, whose consumption throughout the year is favored by preservation and freezing techniques.
From the pea plant are obtained various types of food, both for man and for livestock:
• dried peas, ie seeds harvested when ripe, form a dry legume, and are also used for domestic animals, both as whole grains (volatile) and in the form of flour (pigs and cattle); they are also an important raw material for the processing industry (starches, protein extracts);
• fresh peas, both in the form of immature seeds and equally immature whole pods, are a fresh legume;
• young leaf shoots are also used in human food, particularly in Asia, as well as sprouted seeds;
• the plant as a whole, both fresh and dried, is used as a feed for ruminants.
The dried peas (12% moisture) are starchy, comparable to other legumes (dried beans, lentils, dried beans, chickpeas) and cereals for their energy value (330 cal / 100 g). The glucidic portion of the peas is essentially formed of starch (amylose and amylopectin in varying proportions depending on the variety) and represents about 50% of the seed. On the other hand, sugars are 6% of the seed nutrients and are mainly sucrose and oligosaccharides, including stachyose. Like all legume seeds, pea has a moderate glycemic index, close to 32 (100 is the value attributed by convention to glucose).
For human food, remember that peas are rich in protein. These, which have a high value in lysine, are deficient in some essential amino acids such as methionine and tryptophan. They are therefore complementary to certain foods based on cereals, such as bread, which lack lysine instead. In animal feed, the pea is part of the proteins, whose products are intended for the production of high-protein feed.
It should be noted that the richness of pea fiber is considered a positive aspect for human nutrition, but not for the feeding of animals because the fibers prevent the assimilation of proteins and starch in animals with a single stomach.
Peas are a good source of minerals, especially potassium, phosphorus, calcium and iron, as well as vitamins B, especially folate or vitamin B9 (70 μg / 100 g). They are also characterized by the very low content in lipids, less than 2%, mainly represented by unsaturated or polyunsaturated fatty acids, and for the absence of gluten.
In human nutrition, as mentioned, peas can be eaten both fresh and dried.
In Asia, also the tender leaves and young shoots are used as a food resource. A coffee substitute is also obtained from roasting the seeds of dried peas.

Preparation Mode –
Fresh peas, known as “peas novelli” (or “petit pois” in French) can be consumed immediately after harvesting or be stored or deep-frozen; some varieties, the so-called “mangiatutto”, are consumed with all the pods.
The dried peas are often prepared in the form of creams or purees. They are often traditionally associated with dishes in combination with carrots. However, the recipes with peas are many and varied, there are more than 50 recipes that we present in our list and that, in no way, exhaust all the possibilities of what is halfway between a cereal and a vegetable .
Peas refresh pasta or rice salads. They become a second complete cooked with eggs; they chop with the electric mixer to turn into creams or velvets to be enjoyed hot or cold; they are mixed with stuffed pies and savory pies. They are the indispensable filling to compose the famous Sicilian recipe of rice balls and the famous Venetian dish risi e bisi, based, in fact, rice and peas. Of recipes with peas you could complete a whole recipe book and you would not be able to exhaust all the possibilities of this legume so used in Italian cuisine.
Below we list only the most widespread preparations: Timballo anellini and fresh peas with meat sauce, Timballo anellini and fresh peas with meat sauce, Rice and peas, Peas and bacon, Peas stew, Lasagna peas and pecorino, Lamb stew with artichokes and peas , Pea cream with chantilly salted, Peas, mint and ham, Risotto with prawns and peas, Cream with peas and mustard, Millefeuille with stuffed omelette, Minestrone primavera, Stewed meatballs with peas, Medallions of cream of decorated peas, Glasses of best summer , Stew with potatoes and peas, Canape of beetroot and cream with peas, Fresh salad of peas, Paella with seafood, Paella with fish, Chicken and pea fritters, Cold rice with avocado, Cod fillets with pea sauce, Soup of potatoes and peas, Peasant omelette, Curry rice with peas, Rustic with meat and peas, Cuttlefish stew with peas, Flan of peas with mint, Veal stew patat ee peas, pea and mustard guacamole, ossobuco with peas, stewed cuttlefish with peas, pea and mint meatballs, peas flan with basil, peas and mint omelette, savory pie with vegetables, caserecce peas and meat sauce, stuffed shells with pesto and fresh peas, Peas and tuna in the village, Timballini of macaroni, Soup with chicken in crust, Paella alla Valenciana, Minestrone of sword and peas, Wild rice three delights, Sea bass with vegetables and peas, Terrine of vegetables and peas, Rice au gratin and, finally, Risi e bisi. But the list is practically infinite; to you all the imagination you need.
Warning: the ingestion of peas can trigger allergic reactions in some subjects. They are caused by some proteins, the vicilins, also present in many other legumes.