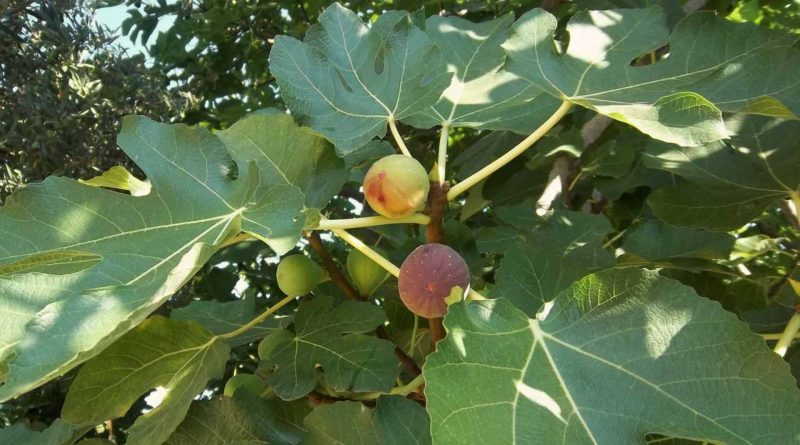 The common fig (Ficus carica L., 1753) is a xerophilic plant native to the temperate subtropical climates of the Moraceae family. This plant is the northernmost species of the Ficus genus.

Etymology –
The term fig is used for the fig tree fruit in almost all Italian dialects. He has always had a strong sexual connotation for the female genital attribute, and for action with it. The meaning is also taken up by Dante in the Divine Comedy, in the part of Hell, in which he uses an extended term to Vanni Fucci, who “cries” to God. Before then the term is annotated for the meaning of female genital attribute by Aristotle (350 BC); derives in this sense from the Syrian (Phoenician) pagga, and this from the previous Aqadic pīqu, or sīqu (2300 A C), both as a precise noun for female sexual attribute and for related derivatives (verbs referring to activity sexual).

Geographic Distribution and Habitat –
Ficus Charge is a heliophilic and thermophilic plant, planted on dry and stony limestone or neutral soils, sometimes also at the foot of walls and walls, especially in the presence of fissures; for its growth it becomes critical in arid places the presence of small water resources, whether manifest or not.
It has an extreme variability of cold resistance, which is almost constant in all varieties for the plant survival (in Italy), but is rather extensive with respect to the vital conditions associated with the lignification of the herbaceous parts. In summary a young plant, or intense growth, or excessive irrigation or fertilization can be severely damaged at temperatures of -6 ° C. An old plant with woody branches in arid and sunny soil is resistant to -18 ° C.
Conditional is the variety of plants for fruit ripening, there are varieties with hard shelled fruits, less susceptible to mold development and “closed” ostyolysis, which allow fruit to grow in colder and more humid climates.
Its presence is from north to south from 0 to 600-800 m altitude in south exposure; in Sicily we find it up to 1000 m on Etna.
The plant is still present in nature in desert and subdesert areas, warm and arid, with few but secure water resources; is widely cultivated throughout the national territory, in arid, well-drained, sunny areas.
The Ficus charge area is contiguous to that of the Ficus palmata, the southernmost; the two species are botanically close (but not the same), and probably have been geographically separated in relatively recent times, from one of the last glaciations (40,000-100,000 years ago). The two areas have the greatest proximity, or overlap, in Egypt, Jordan, Iran, Pakistan, where natural hybrids may have been produced. 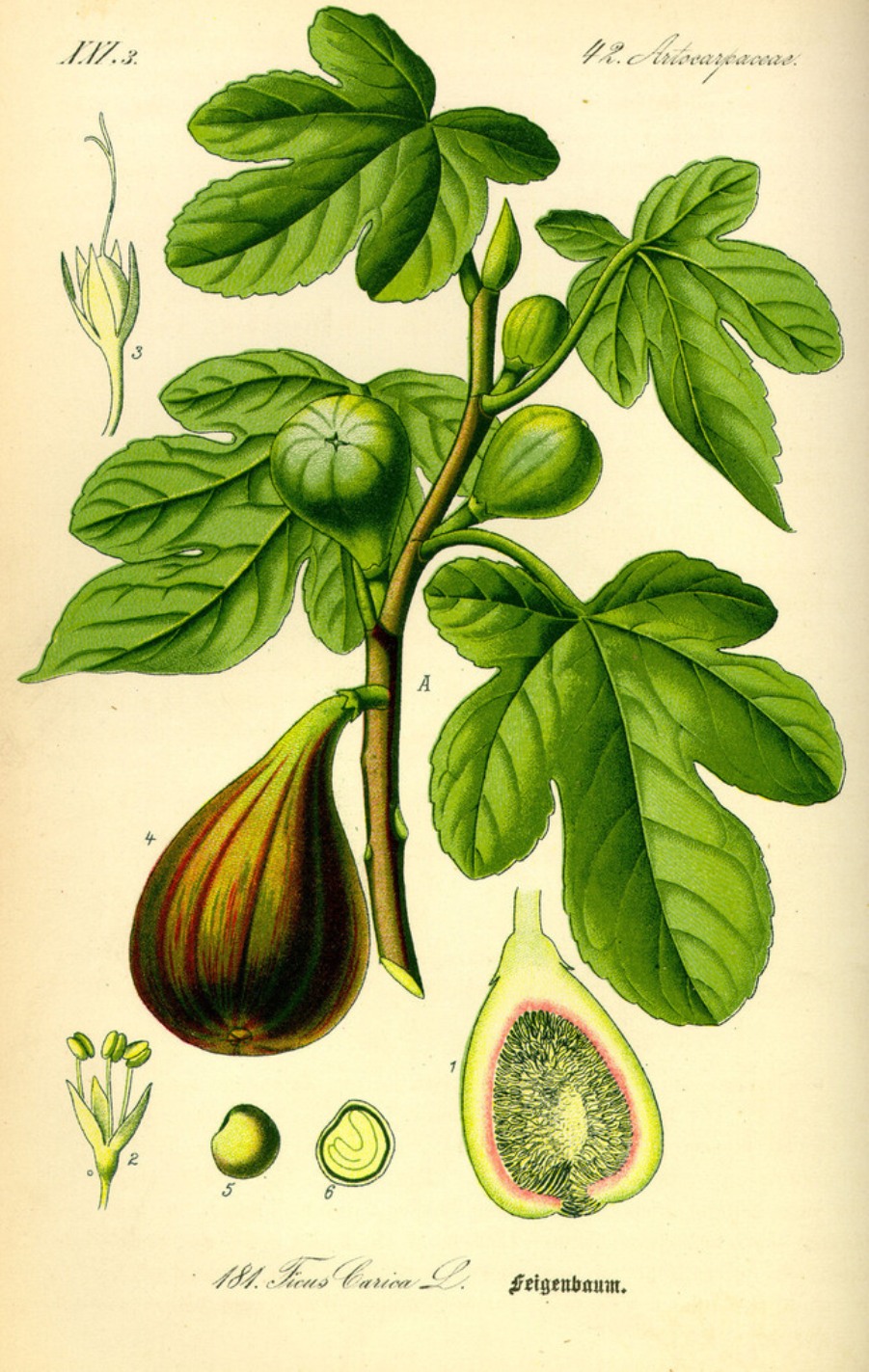 Description –
The fig is a tree with a short tree trunk that can reach up to 6-10 m in height. It has a finely wrinkled bark and gray-brown color; the lymph of this plant is of white milk; Branches are rich in marrow with endless gemstones covered by two green, or brownish scales.
The loaded Ficus leaves are large, rough, oblong, coarse lobed to 3-5 lobes, dark green on top, lighter and equally ruddy on the bottom.
The fruit of the fig is actually a big fleshy, piriforme infatuation, rich in sugar, mature, called a siconian color varying from green to reddish to bluish-violet, hollow, inside which are enclosed the unusual flowers, very small; a small apical opening, known as ostiol, allows the entrance of pronuto imenotteri; the real fruits, which develop within the inflorescence (which becomes therefore an infruttescence), there are many small trees. The flesh surrounding the little trees is succulent and sweet, and it is the edible part.
The species is characterized by two botanical forms that can be defined as male plants and female plants, since the first (male or capricious plant) is the individual that produces pollen with inedible fruits, while the second real ( a female plant that produces edible fruit) produces seeds in the fruits. In fact, the botanical distinction is much more complex, since caprific has in fact complete parts both for the female part (ovaries suitable for receiving pollen) and for the male part (which produces pollen); The female part is however modified by a microscopic wasp (Blastophaga psenes) that lives in the ovaries (modified in galle) and therefore the female part is sterile. The capricorn plant, by means of the small wasp, carries almost exclusively a male function, producing pollen (at the opening of the siconio) and carrying it from the wasp that breeds; Only the larval females shaman out of the fruit, carrying pollen with them. Capricorn fruit is not edible: it is neither succulent nor sweet.
The real edible fig tree receives instead pollen and therefore ripens seeds that are, as said, botanically achen, or those small grains that lie within the fruit.

Preparation Method –
The figs are good to eat both fresh, freshly picked and dried. However, the friction drying is sometimes somewhat problematic. In unsuitable climate, or under inadequate hygienic conditions, they may develop on molds from Aspergillus flavus, aflatoxins producers, known to be one of the most potent known carcinogens, as well as greatly toxic!
As mentioned, figs are really rich in beneficial fruits. They are naturally sweet and are also very versatile in the kitchen. In fact, with recipes with figs you can prepare a full menu of appetizers to the sweet or choose only a few specialties to try.
Remember that figs with their distinctive taste are very well matched to the salty ingredients, creating a pleasant contrast to flavors in your dishes. The recipes with figs have anti-inflammatory properties, help the immune system and improve digestion, just to name some of the virtues of these fruits.
With the collection of figs we suggest below you will be able to enrich your archive of vegetarian recipes and amaze your guests with ever more tasty and healthy ideas. Here are then ten recipes with the figs to experience.
1) Carpaccio with figs
If you are thinking of picking figs to prepare an appetizer somewhat different than usual, this vegetarian recipe could make your case. The figs in this case are combined with mozzarella, parmesan in flakes and aromatic herbs such as rosemary. You will need black pepper and green pepper to season it. Here the recipe.
2) Appetizer with figs and ginger
If you want to prepare an appetizer for figs that are both sweet and slightly spicy at the same time, do not forget to combine these tasty fruits with a touch of ginger. You will also need extra virgin olive oil and bread, even better if homemade. Here the recipe to follow.
3) Figs stuffed with pine nuts and balsamic vinegar
This fig-shaped dish is very versatile. You can serve it as an appetizer, as an aperitif but also as a second original dish accompanied by other seasonal dishes. To taste taste figs here we find pine nuts and balsamic vinegar. For filling figs you can choose spreadable cheese or soft tofu. Here the recipe to follow.
4) Risotto with figs
Have you ever tried to choose figs as ingredients for your risotto? Never underestimate the winning combination of sweet and salty flavors in the kitchen, which will surprise you especially in the first courses. To prepare this risotto you can combine figs of different varieties, such as green figs and black figs. Do not forget to keep slices of fresh figs to garnish. Here’s the risotto with figs.
5) Penne with figs and peppers
If you want to bring a plate of pasta a little different from the usual. the time has come to experience a new seasoning with figs and peppers for classic pens. The recipe plans to use figs, peppers to be cooked in pan and celery. You can choose wholemeal pens or spelled. Here the recipe.
6) Vine shoots and figs
Have you ever tried to make rolls with vine leaves? Some recipes provide you with a filling of rice, raisins and aromatic herbs, but you can add to the ingredients of your plate – suitable as an appetizer or as a second – figs, along with honey and goat cheese. Here the recipe to follow.
7) Crushed with figs
Focaccia with figs, better in sweet or salty version? You choose it, but if you prefer a salted steak, you can serve it as a second dish cut into triangles and accompanied by a light salad or a seasonal vegetable outline. The secret to making this crushed to really special figs is fresh rosemary. For sweet figs, add the nuts and sugar recipe to the full recipe or a natural sweetener of your choice. Here and here are the recipes to inspire you.
8) Strudel with figs and grapes
If you want to change the classic apple strudel recipes you can replace the traditional filling with fresh figs and grapes. Your strudel will be great if you also give a crunchy touch to your cake by adding chopped walnuts or pine nuts. Here is the recipe to inspire you.
9) Homemade fig jam
Here is a classic recipe that our grandmothers used to store figs and we can also prepare them from fresh figs. The fig jam will serve us to prepare homemade tarts, biscuits, pies and other good desserts. You can try replacing the classic sugar cane with whole cane sugar. Here is the recipe to inspire you.
10) Tart of figs and nuts
To prepare your fig-tart you can use both fresh figs, which you can roll with a little lemon juice to get a puree and fig jam. Nuts will make your preparation more crunchy. For the base of the tart, you can choose the short pastry. Here the recipe to follow.