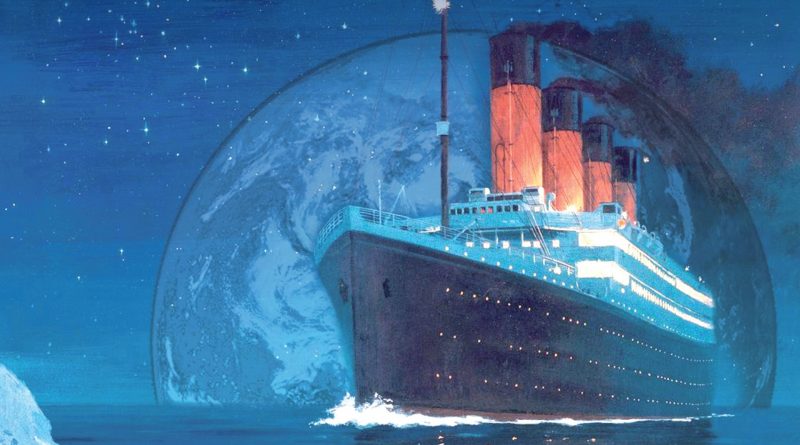 (* From the preface of Guido Bissanti’s book: Like the Titanic?)

To tell a story yet to be invented.

Vision of a near future venture

Who calls each person responsibly:

An appeal to science, knowledge and conscience

Addressed to the passengers of the planet, the only common boat.

And it does not seem rhetorical to mention a boat

Since the author brings the Titanic as an example,

To explain with stark analogy

Distracted and unattractive, overwhelming and reluctant

Of the most elementary notions for conscious development.

The course that our “common boat” is going through

Tense at full speed towards the conquest of an ephemeral primacy:

Show the muscles of the galloping industry,

The determination of command, ingenuity, and wit

To gain a glimpse of few.

How similar is the story of the “unsustainable” Titanic

To the events that characterize our era?

On the “dashboard”, crews and government;

The powerful “high classes”, the orchestra and the scientific and cultural world;

More “down” the common passengers, the vast majority of men.

The question is complex and demands an answer,

That the author develops eloquently and comprehensively

Starting with the consideration that the present society,

Daughter of the “certainty” of “illuministic reason”

Know how to see the limits and elaborate capable theses

To understand the laws, principles, and rules of the universe.

This is the thesis at the center of the author’s volume:

A constant and mature commitment of governments,

So that they do not work lightly like the “crew” of the Titanic;

A greater weight of science and culture,

So that knowledge does not resemble the “high classes” of sicumera;

An invitation to the mass-media “orchestra”

So that you can enjoy a more consonant music at the historical moment;

A more responsible attention to lifestyle

And greater control over power decisions,

So that people in the “bottom” cease to ignore what future is reserved to him.

Examining today’s life of our society

Stretches its gaze to the near future

Tending to call humanity to a new relationship

Harmonious and sustainable with the Earth planet.

A large chapter opens to the fore

And the desire to open is overpowering.

From afflictions and inconsistencies;

The violence of every day is screaming everywhere;

And overwhelming and incontrovertible power;

Between the lines of the book, this discomfort snakes,

But answering cries with no crying cry,

The speech is valid as a new dialogue;

And more so if it offers an intercultural value

In a few elements that recall

The essence of matter as a vehicle of information:

Evocative thoughts of a feeling

Which binds and binds possible arrangements,

Civilization and communion of man with the truth.

The author pays off the intricate mug,

You need to find the top, and it is useless to look around.

It’s along our inner labyrinth

The beginning of the discourse that unites the will and the duty;

Where the power of love, culture and art

Warms the heart, nourishes the mind

And muddles the technical and scientific phenomenon

In a creative process

Is perceived by the author as an appointment to be missed;

And the arguments move on the planet’s energy chapter

Analyzed as the “fuel” of history;

On the values ​​that global society will have to assume;

On a review of science; On an analysis of an economic model

No longer suitable for human centrality,

And on a review of the relationship between man and territory

Starting with agriculture that has generated all civilization.

The extensive bibliography and over 100 explanatory notes

Between technical and scientific terms, events and authors of all time

Who have been able to offer opportunities for a wider knowledge,

Side by side and make varied theses grounded

Which the author wanted to exhibit in his meticulous work

Looking for a new harmony, a future for everyone.