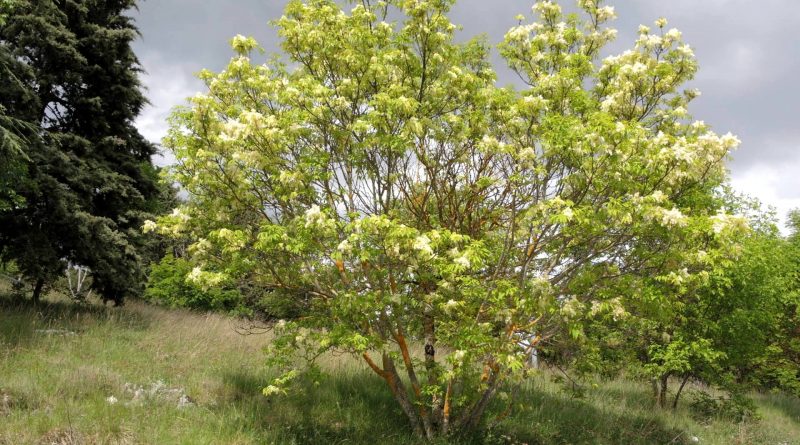 Fraxinus ornus L. is a species belonging to the Oleaceae family (known as Orniello or Orno but better known as manna ash or manna tree in areas where manna is produced). It is a tree or shrub of 4-8 meters high which is often found in the form of a bush.

Systematic –
From a systematic point of view, the Orniello belongs to the Eukaryota Domain, the Kingdom Plantae, the Magnoliophyta Division, the Magnoliopsida Class, the Scrophulariales Order, the Oleaceae Family and then the Genus Fraxinus and the Species F. ornus.

Etymology –
The term used for this kind seems to date back to frass, which in Greek has the meaning of “defending”, perhaps because of the dense weave that plants form in some habitats. The epithet Ornus probably has been chosen for the ornamental relief that the plant can take due to its beautiful blossom.
Geographic Distribution and Habitat –
The ornate is a submediterranean-mountain element, with an extended area from the Iberian Peninsula to Lower Asia; In Italy it is spread throughout the peninsula and islands. Vegeta at medium-low altitudes, though rising in the South of Italy up to 1400-1500 meters. In the broadest sense, the species vegetates on uncoated soils, mainly derived from carbonate rocks, neutro-basal reaction and reduced water availability. The orniello is almost always associated with the black hare (Ostrya carpinifolia): orno-ostrieti, because the two species have coincident needs in edafic terms (calcareous-dolomite substrates) and climatic (south facing slopes, therefore hot and dry).
The two entities, widespread, are found together in various types with a fairly constant crawling of herbaceous and shrubby species.
In the peninsular and insular Italy, in addition to being associated with the black horn, the ornate often also coexists with species of Quercus species (leccio, roverella and cerro principalmente), of the genus Acer, with chestnut and with the species of Mediterranean vegetation high. In the northeast of Italy there are primitive formations in the forests, on cliffs sometimes associated with leccio and on debris. 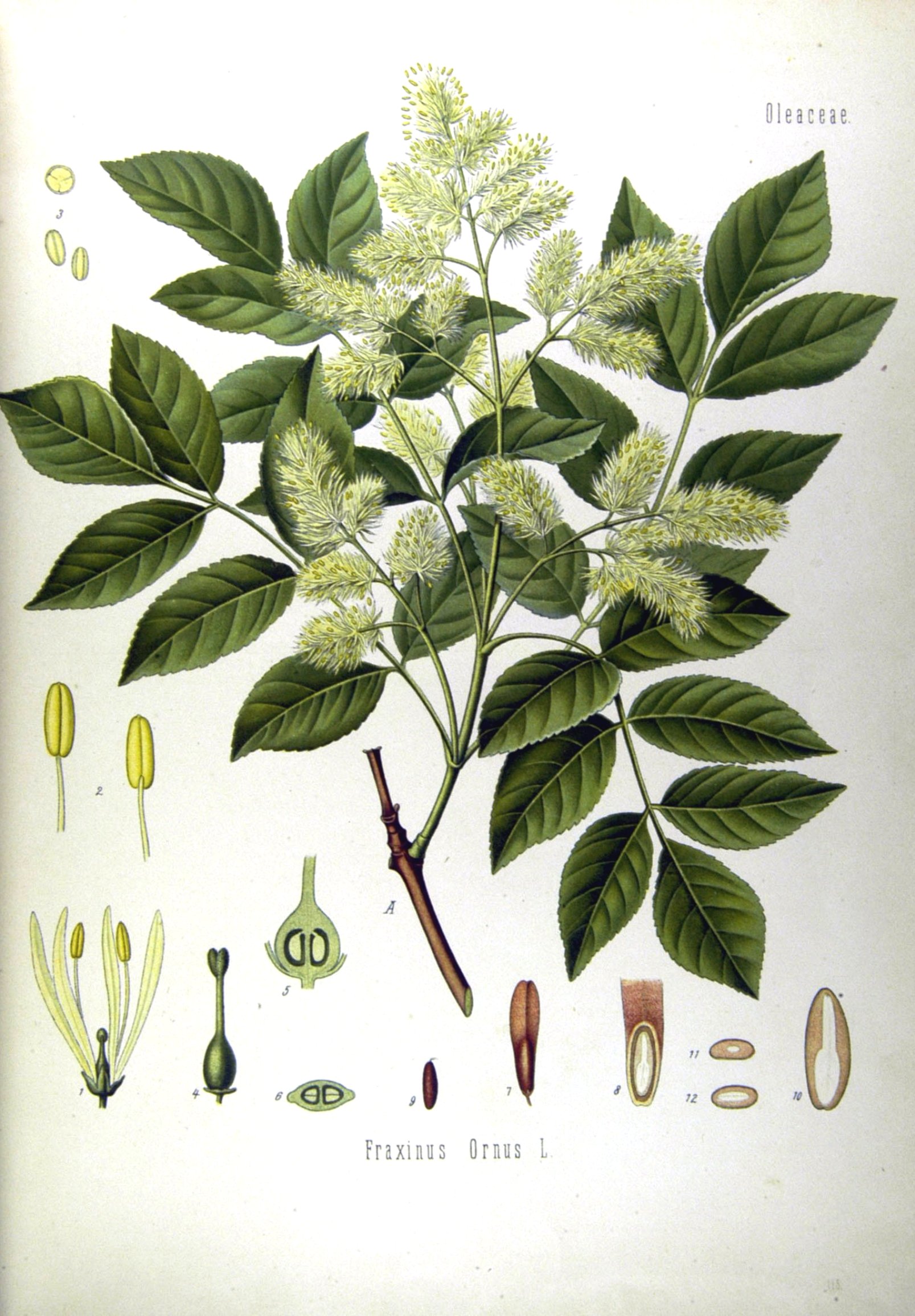 Description –
The Orniello has an erect trunk, slightly twisted, with ascending branches ascending with smooth grayish, dull, bushy tomentose buds; The foliage of this plant is wide and is composed of opposing, unadulterated caducae leaves with 5-9 segments (most often 7), the lateral ones measuring 5-10 cm, elliptic or lanceolate, slightly pitted and wide a third Of their length. The central segment, on the other hand, is broad about half its length and is oboisted; The upper face is of a beautiful green color, the lower one is lighter and furry along the ribs.
The orniello has inflorescences shaped like cobwebs, generally apical and axillary; The flowers are generally hermaphrodite and fragrant, with a short pedicle, have a bellied bell with four lanceolate and unequal lacinias greenish-yellowish; The corolla has slightly pink, linear linear petals of 5-6 mm in length.
The fruit is a samara oblong, wedged to the base, extensively allied to the apex, 2-3 cm long and with a single compressed seed of about one centimeter.

Uses and Traditions –
The Orniello plant uses roots, bark of young branches, leaves, fruits, gems, and manna. Manna has already been mentioned more widespread.
The manna is primarily a contra-indicative light laxative, particularly suitable for early infancy, to debilitating and convalescing elderly people (generally administered in milk, or as a decoction of manna, which is a bland purgative); It is a regulator and refreshing intestinal, as it purifies the digestive system from toxins and weights due to poor nutrition. It is also a natural cosmetic, and has a beneficial effect on the respiratory system, in fact it acts as a fluidizing, emollient and sedative of coughing; It is also a natural low-glucose and fructose sweetener, usable as a sweetener for diabetics. The manna possesses numerous therapeutic virtues and is harmless and devoid of significant secondary actions, which among other things makes it particularly recommendable in pediatrics: it is indicated in indigestion and hypertension, has bechic and anti-catarrhal properties, is sedative to cough and Soothing in bronchitis; Bits of manna loose in the mouth slowly have expectorant properties. Finally, it can be used as eye drop in eye congestion.
The chemical composition of manna is very complex and depends on several factors including: quality, origin area, ash age and its exposure, seasonality and many other factors. The manna on average contains the 40-60 % Mannitol or mannitol (C6H14O6), 8-10% moisture, 3-5% glucose and fructose, 12-16% mannitrotium, 6-12% mannitotrothio, 1-3% mineral elements, 0.5% -0 , 1% resin and other substances in smaller quantities (vitamins, enzymes, mucilages, pectins, tannins).
The dried roots of this plant give a diuretic drug instead; The bark, also dried, has eupeptic, tonic (decoction), febrile and anti-diarrheal properties (powder); Leaves and fruits are diuretics, anti-rheumatic and laxatives (infused); The freshly harvested gems in the spring give a macerate with bile, renal, anti-cellulite and anti-inflammatory action.
Wood, though having characters and properties similar to those of the largest ash, has less noble uses, for small logs size and is frequently used as a good fuel. In recent times, the orniello is often employed in artificial plants in hilly and planed areas for the production of wood biomass. As already mentioned, this plant is very important in forestry for the reforestation of poor, arid, limestone or clay soils or as an ornamental plant in large parks and gardens, even on shallow and shallow soils.
Other uses are as a medicinal and medicinal plant and for the extraction of tannins from the cortex. Of the Ornello, the leaves are used as forage for livestock, in poor pasture areas.
In the production of lumber, it is recalled that ornamental wood has light brown hardwood, with distinct rings and with large vessels in the spring area, it is elastic and durable, easy to work. It is used industrially for the production of furniture, various tools, for lathe jobs and as good fuel.
The dried and shredded leaves and the fruit put in infused in boiling water provide the ash tea. The infusion of the leaves harvested in late spring early summer and dried in the sun, is used as an emollient. The leaves fermented with water and saccharose serve to prepare alcoholic beverages.
The decoction of manna, a solid white to yellowish substance derived from the juice which sprinkles from the bark injuries and which quickly converts into the air, harvested in the summer, is a mild purgative, also has bechic and anticatarral properties; Can be used as a drop in ocular congestion; Bits of manna loose in the mouth slowly have expectorant properties.
The use of the Horn for various ends is lost in the night of the times. Moreover, the plant has been known since ancient times – the melia of Dioscoride and the melos of modern Greeks – and this is the spread in Northeast Sicily and in the Nero region which also gave rise to more than one place name and surnames.

Methods of Preparation –
Some products made from the use of manna in pastries are also known by the general public, and perhaps the best known is the “mannetto”, a kind of panettone produced in Castelbuono (PA) and exported all over the world. Pumpkins, sweets of all kinds, pralines, ice creams, etc., are also prepared, including housewives.
The manna – widely used by the confectionery industry and increasingly known as more media attention is directed to niche productions. Manna can also be taken as food-medicine, dissolved in milk against constipation. It seems that the seeds in Egypt are used in the food tradition. Below are some recipes for pharmacological use:
Laxative: manna 40 g, hot water 100 g. It agitates, melts, filters and then adds 30 g of acacia honey.
Purgante: manna 60 g, hot milk 150 g. It agitates, melts and filters.
Against the bronchial cataract (Zanetti jam): 60 g manna, altea 4-5 g syrup, 30 g clay casserole, sweet almond oil 30 g, cocoa butter 23 g, orange flower water 15 g.
Joint rheumatism: boil in one liter of water 60 gr. Of ash leaves, sweeten and consume 2 cups a day.
Diuresis and intestinal regulator: prepare infusion with 25 gr. Of ash leaves in 100 ml. Of water and consume 2-3 cups a day.
Inflammatory fever: prepare decoction with 25-30 gr. Of ash bark in 100 ml. Of water, correct the taste with honey and consume 2-3 cups a day.