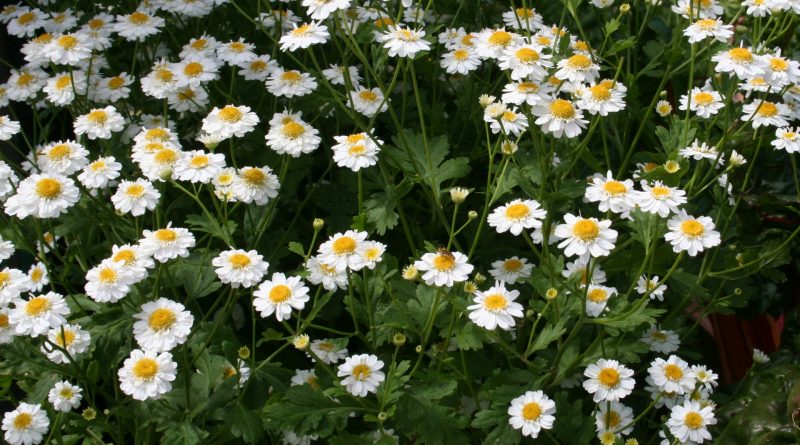 The Parthenon (Tanacetum parthenium (L.) Sch. Bip., 1844) belongs to the Asteraceae family. This species, depending on the places, is called in several ways: among them we recall the terms amarella, amareggiola, maresina, matricale and marga grass.

Etymology –
The generic term would derive from the alteration of “Athanasia” = “immortal”, most likely due to the characteristics of its flowers that are long-lasting. The epithet of the species comes from the ancient name, which was used by Hippocrates, to indicate a plant able to cure the wounds. The Parthenium is also quoted by Dioscoride even though it is not certain what plant to speak. The term has to do however with the Parthenon and according to Pliny this plant was used to heal “Vernulo” great architect then died when he fell from the scaffolding of the temple.
According to other A.A. The term could refer to the name of a virgin who in Greek was called “Parthenos”.

Geographic Distribution and Habitat –
Feverfew is more easily in rocky places and fallow the European temperate zone, North and South America and in the Caucasus region. In Italy its natural habitat is on the walls and ruins, in fertile soils, hedges and an elevation spread ranging from sea level to 1500 m above sea level. Despite its large potential applications, today, in Italy, is Only in ornamental gardens. 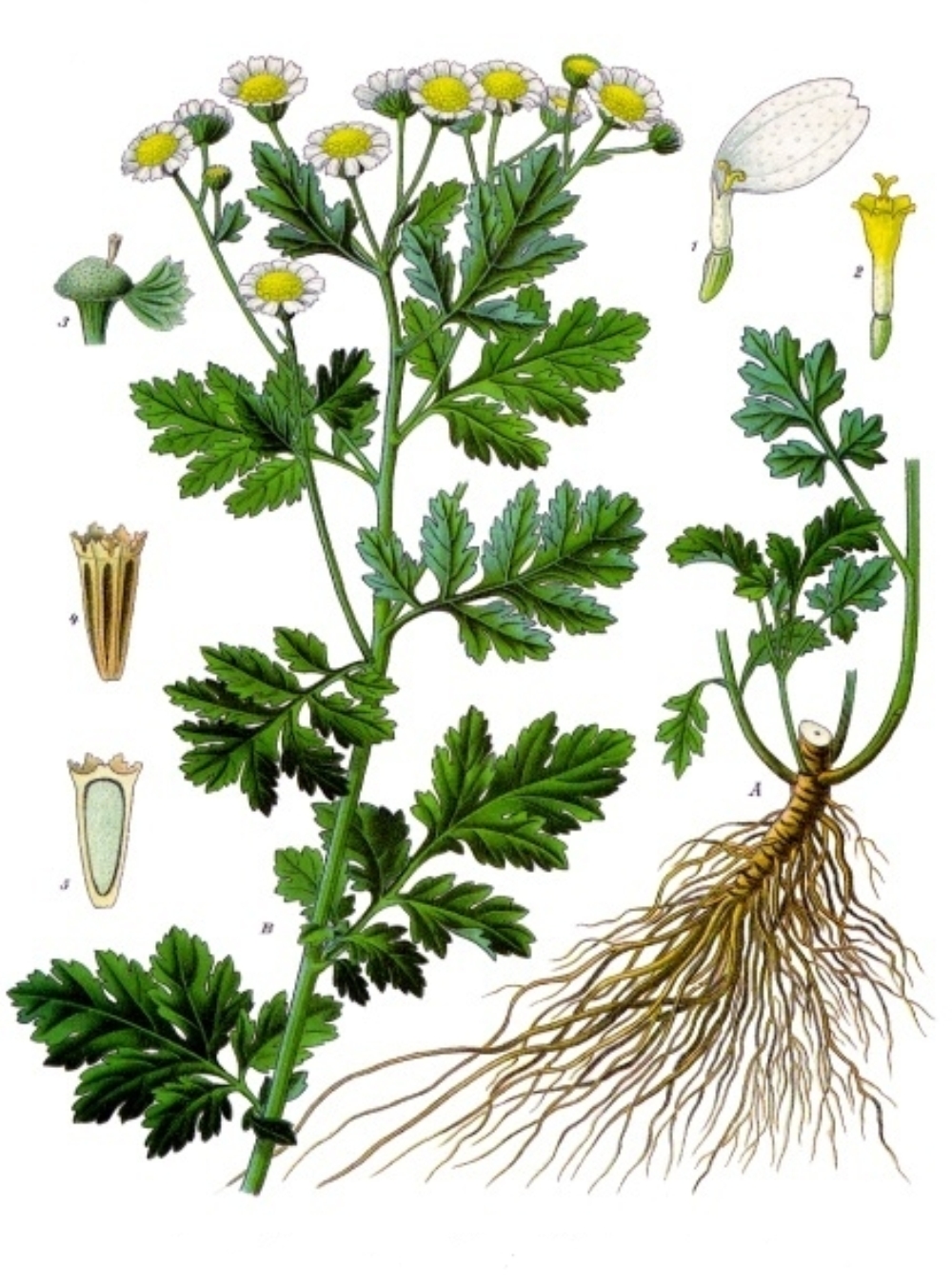 Description –
The Tanacetum parthenium is a perennial herbaceous glabrous plant with the characteristic smell of pyrethrum, 30 – 80 cm high and with a rooting root. It is recognized for its stem erect with reddish streaks, pubescent, with branches branching in the upper part forming a limb corimbo.
The leaves of this species are alternate, twin-bumped, with the basal ones early fallen, the lower caulian ones with petioles of 2-4 cm and leaf 3-4 x 6-9 cm and divided into 5-11 segments deeply pennato-parties and With marginal teeth and dull. The flowers are placed on pointed heads (Ø 1 cm) with an inconspicuous shell on the back and with a peduncle of 2-4 cm.
It has white flowers, linear ligulas of 5-10 mm with longitudinal veins and a bi-trifido trunk. Shrunk wrap with brattees with scary edges. Acute and completely herbaceous squamous. The disc flowers are tubular and yellow. The spindles are 1.5 mm in size with 5-6 light shingles and topped with a sprocket of 0.2 – 0.3 mm.

Cultivation –
The Parthenon to achieve its maximum development is approximately two to five years. The plant is also indicated by two synonyms: Chrysanthemum parthenium and Matricaria parthenium.
The cultivation of this species can be carried out in different ways depending on the use that is to be done: informal garden, gravel garden, Mediterranean garden, jar or container, architectural garden, terrace or courtyard, rocky garden, meadow or full Field, flower garden, countryside garden, coastal garden, sub-tropical garden.
The cultivation of this species for traditional agricultural use is uncommon but, for its therapeutic applications, it has great potential.
The type of substrate suitable for the growth of the Tanacetum parthenium plant can be varied, the ones that can give greater results are the typologies: chalky, greasy, sandy and clayey. The cultivation medium can have a pH: acid, alkaline and neutral.
Orientation compared to cardinal points is not important for all positions. Exposure to light can be in full sun, half shade, shadow. Clearly, exposure affects the organoleptic qualities of the plant and the ornamental aspects, so it must be decided a priori according to its actual use.
However, the Tanacetum parthenium plant is a plant that is quite adaptable to the most varied growth conditions, so it does not require constant plant cultivation, but to grow well, it needs an exposed position.

Methods of Preparation –
Foliage is used with leaves, with adjacent parts of the air. Parthenos infusion has beneficial hypotensive, digestive, and emmenagogic effects. Between July and September, the aerial parts of the plant are collected and dried. They are used in the form of decoction or infusion that is succumbed or used to wrap on parts of the aching body like inflammation of the skin or muscle aches.
One way to mitigate migraine is therefore to chew two fresh (or frozen) leaves daily, or take a pill or capsule containing 85 milligrams of leaf material. The turnip has a rather bitter flavor. Generally preferred pills or capsules are preferred, compared to chewing leaves. If partridge capsules are not beneficial over a few weeks, a brand should be changed before giving up this herb. Prepare infusions of venison to exploit its possible hypotensive, digestive and emmenagogic benefits. To prepare an infusion, use 1 / 2-1 teaspoonfuls of grass in a cup of boiling water, leaving it infused for 5-10 minutes. The maximum dose is 2 cups a day. In Italy there is the mother dye of partenion dye.
The bitter taste of the marshmallow, finds its use in some culinary preparations that require bitter aftertaste. It is mainly used to prepare vegetable soups and soups in general, aromatic omelettes and also adds to the fatty meats.
Parthenosis should not be given to children under 2 years of age. For older children or older people over 65, start with light preparations, increasing their power if necessary.

One thought on “Tanacetum parthenium”