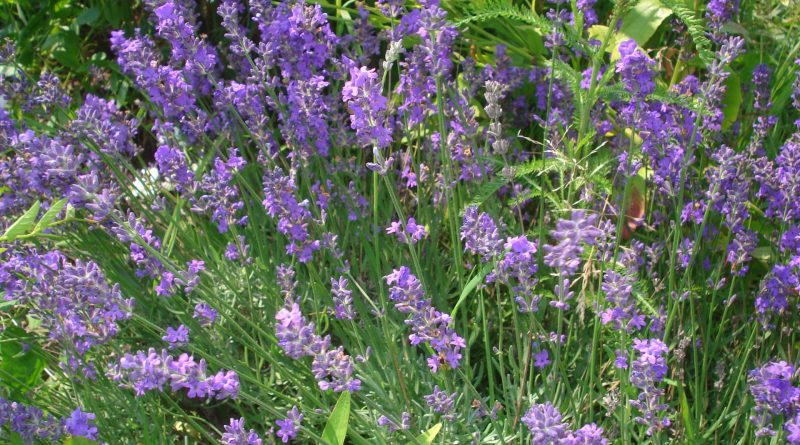 Systematic –
From a systematic point of view, the Lavandula angustifolia belongs to the Eukaryota Domain, the Kingdom Plantae, the Tracheobionte Subordination, the Spermatophyta Superdivision, the Magnoliophyta Division, the Magnoliopsida Class, the Asteridae Subclass, the Lamiales Order, the Lamiaceae Family, the Lavanduleae Tribes and then the Genus Lavandula and the L. Angustifolia Species .
Let us emphasize that the Lamiaceae family is very numerous with about 250 genera and almost 7000 species, with the main differentiation center in the Mediterranean basin. Lamiaceae are mostly xerofile plants (in Brazil we also find arboreal species). The family is divided into 7 subfamilies; The genus Lavandula is described in the Lavanduleae tribe (which is the only genus) belonging to the Nepettoideae subfamily.

Etymology –
The name “lavender” with which we are used to calling these plants (but also the scientific one of the genus Lavandula) in the Italian language comes from the Latin “wash” (ie that must be washed) to allude to the fact that these species were very much used in ‘Antiquity (especially in the Middle Ages) to cleanse the body and in any case to the old custom of inserting the flowers of this plant into the bath water for the purpose of smelling it. The specific name (angustifolia) instead refers to the narrow leaves of this species. The scientific name was first defined by Scottish botanist Philip Miller (Chelsea, 1691-1771).

Geographic Distribution and Habitat –
The origin area of ​​Lavandula angustifolia is Steno-Mediterranean West. In Italy it is present (but rarely) discontinuously along the entire Tyrrhenian coast (islands excluded). This species is present outside Italy, in the Alps. We find it in France (departments of Alpes-de-Haute-Provence, Hautes-Alpes, Alpes-Maritimes and Drôme). Other European reliefs coming to the Alps are located in the Jura Massif, Central Massif, Pyrenees and the Balkan Mountains. In the rest of Europe it is present throughout the Mediterranean basin.
The Lavandula angustifolia typically grows in low spots and garlands; But also in the arid and stony terrain and exposed to the sun. The preferred substrates are calcareous and siliceous substrates with neutral pH and low nutritional values ​​of the soil. It grows very well in the arid terrain. It’s a species we can find up to 1800 m s.l.m .. 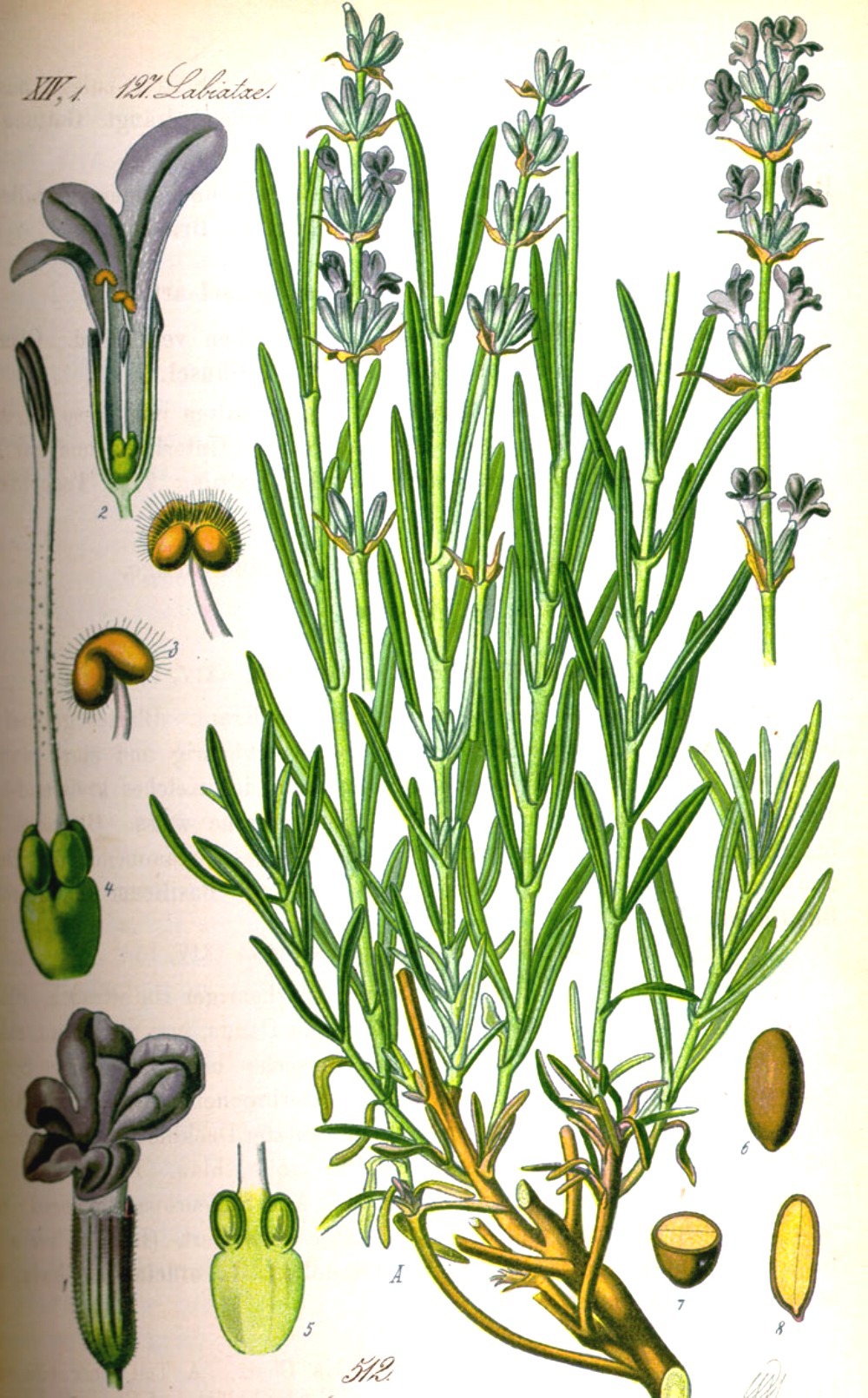 Description –
The species may vary in size, depending on where it grows and climatic conditions. It ranges from 30 cm to 120 cm, but there are specimens that reach up to 180-200 cm. They are perennial and woody plants, with wintering gems set to a height from the ground between 30 cm and 2 meters. The porch is shrubby or suborbustive or shrubby-shrubby. They are strongly aromatic plants. The garment is gray-toment (with star-hairs).
The roots of this species are secondary to rhizome; The stem has a woody aerial part, erect with a pubescent surface. The top is branched with young branches that have herbaceous consistency.
Leaves grow along the stem opposite. The lamina is full with contour from linear to linear-lanceolate and revolving edge. The leaves of this species are very fragrant with persistent aroma. The leaves of the leaves are tufted with smaller leaves. The leaves are 1.5 to 2 mm in width and 15 to 25 mm in length.
The inflorescences are real ears of 3 – 8 cm, with flowers arranged in verticilli (from 6 to 12 flowers) and are more or less long pedicels and distanced. In the inflorescence we find brattees with membranous and rhomboidal texture, narrow to the apex; The surface comes with 5-7 fan-shaped ribs. The brates have a width of about 3 – 4 mm and a length of 6 – 8 mm. The bratteoles are nulle or small and there is not a clump of sterile bratts.
The flowers of this species are hermaphroditic, zygomorphic, tetrameric (4-cyclic), with four verticilli (goblet-corolla-androceo-gynecologic) and pentameri (ie with corolla and five-piece goblet). Flowering is, according to the growth habitat, between June and September.
The fruits are skewers composed of 4 glabrous and smooth nucule. The nodes are provided with aisles and have different shapes, sizes and colors. The dehiscence is basal or lateral.

Cultivation –
For the cultivation technique see the specific sheet.

Uses and Traditions –
The properties of lavender are many, both in medical and cosmetic terms. Its use can be made internally or externally depending on the problem to be treated. Internally, it can be a great help against excessive production of intestinal gas, sore throat, headaches and dizziness, asthma, acne, bad digestion, cephaliza, hydronphosis, dizziness, hypochondria, nausea, hiccups, coughing Acute, vomiting, tuberculosis, fever, cystitis, intestinal parasitic contamination. It is an excellent remedy against diarrhea.
Once the Lavandula angustifolia was very cultivated for the collection of its flowers. It was also used in the perfume industry for the production of essences for perfumes or soaps. In recent times it has been rediscovered because its ability to adapt to poor and arid soil has become precious.
In addition to the classic deodorant and perfumed use that see its flowers used in bags to be used against linens and the preservation of laundry, Lavanda performs important therapeutic activities both in the form of essential oil and as a dried drug. The main use is certainly the relaxing and bland sedative. Thanks to the action on the CNS (central nervous system), carried out by the volatile molecules contained in essential oil, is particularly suitable for the state of restlessness and sleep disturbances. It is also found in sedative and relaxing herbs added to other plants such as Valerian, Hops, Passiflora, Escolzia, Camomilla and Melissa; But also more simply in common and practical herbal pillows.
In addition to being used as an antidepressant, tranquillizing, balancing the nervous system, as a decongestant against colds and influenza, it is believed to be effective in lowering blood pressure, reducing digestive problems and mixing with other homeopathic substances for aromatherapy Cure back pain and ears.
Among all the many varieties of lavender used for healing purposes, that angustifolia is considered essential for a number of reasons: first of all the essential oil produced by his flowers is extremely versatile as it blends well with other oils and is also attributed therapeutic actions manifold.
Lavender is undoubtedly among the most famous and appreciated plants of the whole Mediterranean area, and not only that. Its history is very ancient, it dates back to the time of the Greeks, where it was known as “Nardo” by the name of the city from which it was considered to be original.
The uses of lavender are lost in the night of the times. Roman civilization gained great benefit from this essence, which was largely used for the scent of thermal water baths, in preparations for body care and sanitizing rich domus. It is no coincidence that Lavanda originates, as it is said, precisely from the Latin term “wash” as a sign of its wide use for home use for deodorizing and perfumery. Lavender’s essential oil, in particular, has to start up an important branch of herbal medicine. Rene-Maurice Gattefossé, one of the founding fathers of modern Aromatherapy, after an explosion in his laboratory began almost by chance to use this essential oil to treat some wounds, obtaining excellent results that led him to expand His studies on essential oils and all their therapeutic activities. Of this plant belonging to the vast family of Lamiaceae, there are three very popular types: Lavender “true”, from the botanical name Lavandula angustifolia Miller, which is the most precious in herbalist terms; Lavender spice or better Lavandula latifolia Med. And Lavandula hybrida Rev., a natural hybrid between the two previous species. Called more commonly, Lavender, this hybrid of higher size than Lavender True is particularly widespread in Italian territory and has a similar essence to the latter, but from a much more streamlined aroma.
The drug, that is, the part of the plant containing the active ingredients, is made up of the flowered summits, which are collected with the entire stem after the overflow, at which time the plant is richer than aromatic substances.

Preparation Method –
For the presence of aromatic substances, many species of this family are used in the kitchen as a condiment, in perfumery, liquorice and pharmacy.
Here are some useful lavender jobs that will help you fight or relieve some disturbances:
For excessive flatulence and difficulty in drying, prepare a decoction of lavender flowers and flowers, place them in a canvas and lick them on the belly.
Against asthma, throat inflammation, bad digestion, put lavender flowers in boiling water and make an infusion that will have to rest for 20-30 minutes, past this filtered time and drink 3-4 cups a day.
To combat fatigue prepare a decoction with lavender flowers and add it to the water for the bath.
Let macerate 100 grams of lavender flowers in half a liter of alcohol at 80 degrees for 15-20 days, make clutches on your skin, this can be an effective remedy against acne.
Outside, however, can help heal wounds of any kind: leg ulcers, light infections, insect bites, and anal fistulas. Essential lavender oils, through aromatherapy, are used, as mentioned, because they produce an antidepressant and tranquilizing effect of the nervous system.
Lavender can be of help, as underlined, in people who suffer from hypertension. In the past, but at present, lavender is used to make home linens fragrant and to keep away the tarns. In the kitchen, lavender, it is used to give scent to jams and flavor dishes.
To prepare the famous lavender water, put 30 grams of fresh flowers in half a liter of alcohol at 32 °, leave to macerate for about a month, then filter.
As for cosmetics, you will have less fatty and more scented hair if you add lavender to washing water.
Lavender is very much visited by bees, which produce a honey of good quality, but the plant is uncommon outside the gardens and gardens, so production is occasional.
The flowers are edible (edible) and can be used to prepare sweets, biscuits or risottos and dumplings.
Some drops of essential oil, added in the bath water, helps to relax.
Finally, remember that Lavender flowers, in contrast to many other species, keep their aroma long even though they dry. It is in fact customary to put canvas bags in the drawers to perfume the lingerie. The plant, which was already known to the ancients, was also used for the preparation of talismans and lucky ones, linked to magical and esoteric practices.