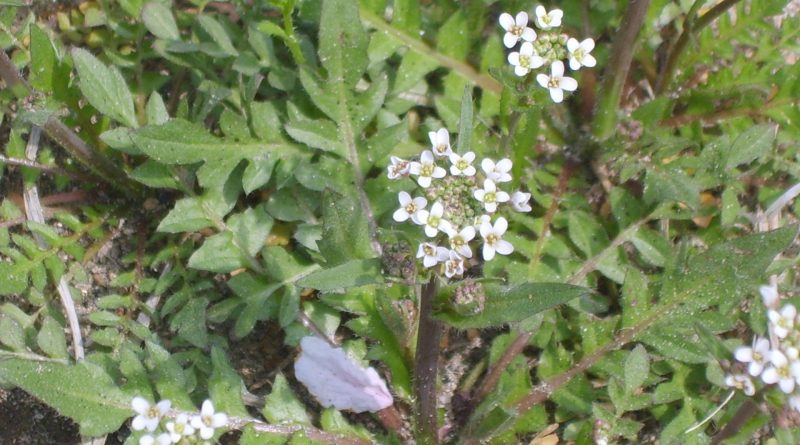 Systematic –
From a systematic point of view the shepherd’s bag belongs to the Eukaryota Domain, the Kingdom Plantae, the Spermatophyta Super Division, the Magnoliophyta Division, the Magnoliopsida Class, the Dilleniidae Subclass, the Capparales Order, the Brassicaceae Family and then the Capsella Genus and the Specie C. bursa-pastoris.
The species has a large variability from zone to zone in the form of leaves, the color of flowers, the shape of the fruit and the bearing in general. In addition, this species, being largely autogama (direct pollination), some characteristics are fixed in local populations and well-circumscribed.
Some subspecies are listed, some of which are considered synonyms of the main species:

Geographic Distribution and Habitat –
Bursa-pastoris Capsula originates in Mediterranean regions even if it can be considered cosmopolitan. The distribution of the species is practically in almost the whole world and is often considered to be poisonous. In Italy it is present all over the territory although it is rarer in the alpine range. It is a plant that suits any type of climate and soil. We can find it between 1,800 and 2,600 m s.l.m .. This precious plant that grows everywhere, on trails, in meadows, in bogs, in ditches and in skis, in fields and in the garden, is generally considered an annoying weed. As soon as land is discharged – especially near construction sites – it is born immediately, almost in the space of just one night. 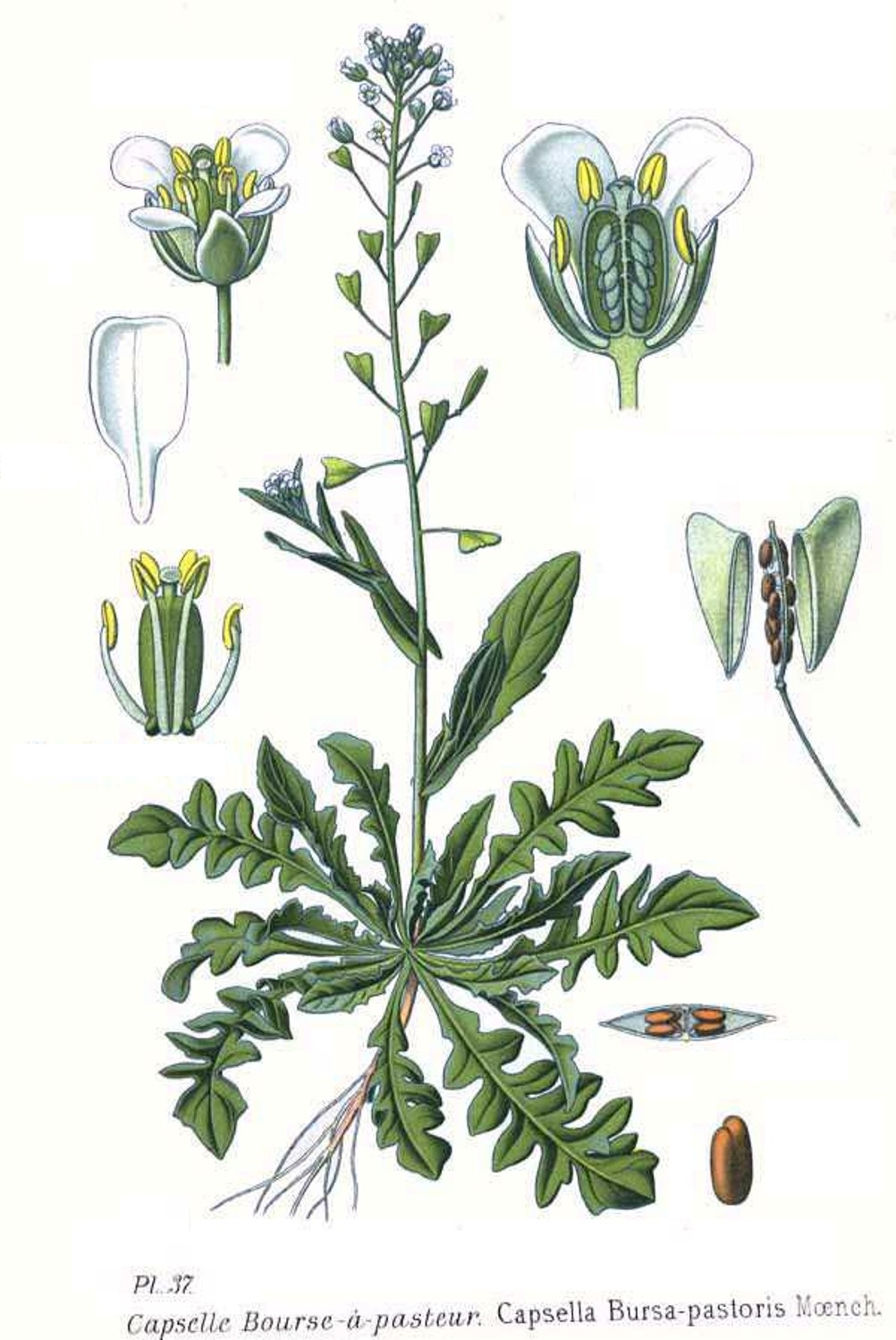 Description –
The shepherd’s bag is easily recognizable for the characteristic pastry or shepherd’s fruit as the name suggests, and is annual or bi-annual. It is a biennial (H bienn) emicryphytic biennial reproduction with gems placed on the ground.
The root is of the type that is slightly ramed but with woody consistency. When dissected it may smell of sulfur.
The stem is erect, thin, branched and almost glabrous with very short hairs. The height of this plant varies from 10 to 30 cm and can reach up to a maximum of 50 cm.
The shape of the leaves is not very well defined. Those basals are picied, lanceolate-spatulate, but we can also find pennato-matches; The lamina can be toothed, lobed or whole. Together they form a typical basal rosette. The leaves may vary in width around 0.5-2 cm and in length 3-10 cm.
The cauline leaves are lanceolate, sessile, alternate, amplitude-shaped (with an arrow-like leaf base) and glabrous. Also at the base there are small leaflets (stipules).
The inflorescence is made up of small clusters. Specifically, it is defined as a racemous and naked, that is, without leaves.
The flowers are hermaphroditic, tetrameric, dialipetal and apymorphic. They have a goblet of 4 greenish sepals, which in some cases may have a slightly reddish color, and oval and membranous consistency at the margins and open at the end. The size of these is 1-2 mm. They feature a corolla of white color composed of 4 small spatulas petals arranged in the opposite and cross-shaped manner that protrude from the goblet and are slightly smudged at the apex. The size of these is 2-3 mm.
The androuser is composed of six stamens with yellow anthers. These often result from transformed petals. The gynecologist has a superior bicarpal ovary; The stylus is persistent in the fruit.
The ancestry continues from January to December even though its flowers are extremely small and insignificant. It is a multi-cyclical plant: its seeds, as seen, just born immediately fall and the plant re-emerges again.
The pollination of Capsella bursa-pastoris is entomophilous.
This plant is also characterized by long pedunculated fruit (with a patented structure and lengths from 0.5 to 2 cm) with a form of flat slices in the shape of an inverted heart and with a size of the slices of 4-6 mm. These contain several light brown oblonged seeds. The seeds have a feature: when dampened they are covered with a viscous substance capable of capturing and killing small insects. This suggests that this plant is a protocarnivora. It is not considered a true carnivorous plant because, although digestive enzymes have been shown and the absorption capacity of nutrients derived from prey, it is still unclear how the plant benefits from this function.

Cultivation –
Being an easy-to-fit plant can easily be cultivated in a variety of conditions and situations: home, garden, and pot, because it does not require care and does not have any special needs. For the cultivation technique, see the following sheet.

Uses and Traditions –
The main uses of the Capsella bursa-pastoris, as well as food are those for the preparation of infusions, decoys and dyes for internal use.
Its main constituents are: tannins, flavonoids (including esperidin, diosmine and routine), essential sulfur oil, alkaloids, organic acids, saponins.
The shepherd’s bag has healing properties: hemorrhagic, hemostatic, astringent. Some active principles in the plant seem to have the property of regularizing the menstrual cycle. In popular medicine it is used in the care of diarrhea, varicose veins and hemorrhoids. The stem (appropriately treated) is used against skin infections. Homeopathy is used as a remedy for hemorrhage and biliary and renal disease.
In botany it is also used as a model organism for the study of morphogenesis, while the industry from the plant derives seed insecticides.
Shepherd’s herbal tea has long been used, with great success, for all types of bleeding, such as bleeding from the nose, stomach, bowel, and irregular wound hemorrhage. In bleeding wounds, in which you can not stop the blood, the shepherd’s stock infusion was used a surprising time.
Shepherd’s herbal tea has long been known and used to regulate menstruation during puberty and then older in menopause. In these cases it acts on the level of the uterine muscle, favoring its contraction and resulting, as a result, a brake on ongoing hemorrhage and reflex regularizes the cadence of the menstrual cycle, especially in subjects with abundant and painful menstruation.
In kidney or urinary vesicles, a herbal tea is recommended by mixing Shepherd’s Bag and Coda Cavallina, in equal parts.
Our shepherd’s bag – likewise the Mistletoe – also has a balancing action on blood pressure and is therefore recommended in both too high and too low pressure. Unlike the Mistletoe, which is to be macerated in the cold during the night, this grass should only be burned. In all external muscular illnesses this plant of great value is an important help. It is interesting (and weird) the fact that nothing is said in any of the modern books of herbal medicine.
Also useful in the treatment of epistaxis, diarrhea, hemorrhoids and varicose veins. The fresh, chopped and macerated stalk for 24 hours in vinegar can be applied on skin infections.
After the discovery of the horned rhodium alkaloids, its use has been abandoned due to the poor reliability of its effects, which depend on the age of the preparation.
From the seeds, in times of famine, oil was extracted. C. bursa-pastoris seeds, when dampened, secrete a viscous fluid capable of capturing insects, but although the digestive enzymes have been shown and the absorption capacity of the organic elements trapped on the surface, the advantages are still unknown Which could draw the plan out of this situation.
Although edible, Capsella is generally consumed with other rustic salads, in particular it goes well with wild radicchio. Some places are also eaten cooked.
For thousands of years Pastoral Exchange was used as a food: the seeds of this plant were found in Tollund’s man’s stomach (about 500 BC-400 AD) and in the Neolithic settlements of Çatal Hüyük, an important inhabited center Of the Neolithic era in the Konya region of Turkey, dating back to 6,000 BC
Its medicinal properties were recognized in the sixteenth century by the Sienese naturalist Mattioli.
In the Eighteenth-Century Hector of Castor During this, her therapeutic qualities are described: “Inflamed iuvat stringit, refrigerat” (good for the treatment of inflammation, tighten the vessels and refresh). “To dissenteriam bibitur decoctio” (to treat dysentery drinking decoction). “Atque bloody” (just as it is for blood loss). “Latest illataque vulnera succus glutinat” (the juice closes the wounds). “Infusus sanguinis effluxus, undantia menstrua sistit” (the infusion stops blood loss and excessive menstruation). “Calceus hanc habeat, nudis pedibusque praematur ictericas facies and sic aurigine mundat” (put on your boots and pressed with bare feet, free your face from the golden color of mystery, that is good for liver diseases).
According to M.Grieve in “A Modern Herbal” 1931, in the past this grass was a great cage bird food.

Preparation Method –
It is an edible plant with a similar flavor to cabbage. Young leaves can be eaten as “field salad” and say they have properties against hypertension, or the basal rosette can serve as “spring soup” or as “soup herb.” In China and North America, on food markets, it is considered a commercial plant. From seeds you can extract edible oil.
With the shepherd’s bag there are traditional recipes that are most likely lost in the night of the times. Veidamone some.

Shepherd’s rustic pastries – Ingredients for 4 people: half pepper green; 100 g of shepherd’s purse leaves; 2 medium sized potatoes; 2 small onions; 3 tablespoons of extra virgin olive oil; salt; 2 leaves of sage; A tablespoon of chopped parsley; A pinch of chili powder; 6 eggs; 2 tablespoons grated parmesan cheese. For the preparation, clean and wash the vegetables, cut them into pieces and season them in a pan with 3 tablespoons of oil; Combine a little water, salt and bake to low heat. Mix occasionally and, if necessary, add more water. Add the sliced ​​sage and parsley and a pinch of chili powder. Apart from splashing eggs with salt and 2 tablespoons of grated Parmesan cheese, pour them on the vegetables and cook until the omelette will squeeze.
Noodles on the shepherd’s handbag – Ingredients for 4 people: 400 g of Shepherd’s purse leaves; 250 g of flour; 2 eggs; salt; 40 g of butter; Parmesan cheese grated. For the preparation, we must clear, wash and bake the shepherd’s purse leaves in salt water, wring them and smear them. Knead flour with eggs, salt and leaves. Spread the pasta and cut the noodles. Lessarle, drain them to the tooth and season with 40 g of melted butter and grated Parmesan cheese.
Let’s now look at some of the ways, even traditional, to prepare for natural remedies.

Turmeric: With one liter of boiling water boil 1 teaspoon of dessert filled; Let it rest briefly.
Steam Cataplasm: Two handfuls of Shepherd’s purse put into a sieve and kept above the water vapor. Then put the herbs so cooked between two pieces and place them on the side.
Dye: Shepherd’s Bag finely chop leaves, stems, flowers and purse, filling her bottle up to her neck; Pour over wheat grit at 38-40 ° C (herbs must be covered); Leave it all for 15 days in the sun or hot.