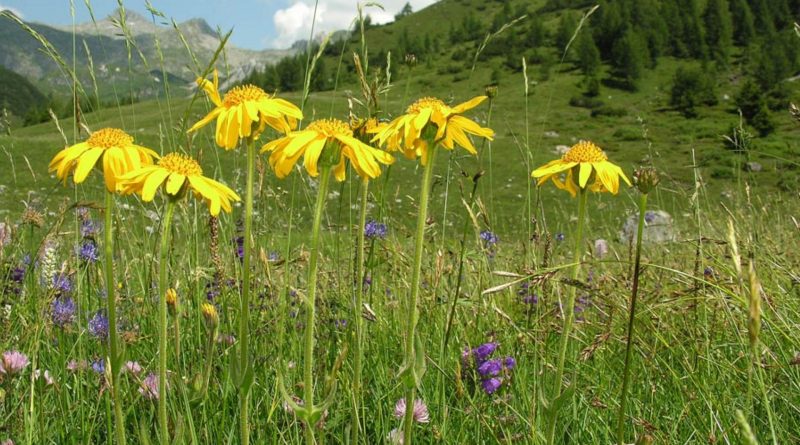 Arnica (Arnica montana L.) belongs to the botanical family of Asteraceae, also known as Compositae. It is a perennial herbaceous plant, erect and slightly branched, which can reach seventy centimeters in height. It features large orange-colored capsules with characteristic “spottinati” petals and a pleasant aromatic odor.

Etymology –
Arnica’s etymology is quite controversial. According to some, it may result from an alteration of the late-Latin (phdrmica) which in turn derived from the Greek ptarmikos (sneezing), referring to the sneezing properties associated with the smell of the plant. According to others, however, it would come from the Greek word arnakis (lambskin) referring to the delicate texture of its leaves.

Geographic Distribution and Habitat –
The Arnica mountain grows spontaneously in the Alpine and Prealpine regions. It is located, for example, on the Trentino Alps, the Stelvio National Park, and the Dolomites, but not only. It also grows in Siberia, in several regions of Central Europe and the temperate areas of North America. In general, this medicinal herb loves the damp mountain meadows.
However it is endemic in Europe, from the Iberian Peninsula to Scandinavia and the Carpathians. It is absent from the British Isles and is relatively rare in Italy. It grows in poor soil (thin pastures, heaths and tall peat bogs) and siliceous (acidic substrate); In mountainous areas from 500 to 2500 m. S.l.m. It is absent in the plain.
Unfortunately, because of the increase in intensive crops, it is becoming rare especially in northern regions and is why this plant belongs to the protected flora. 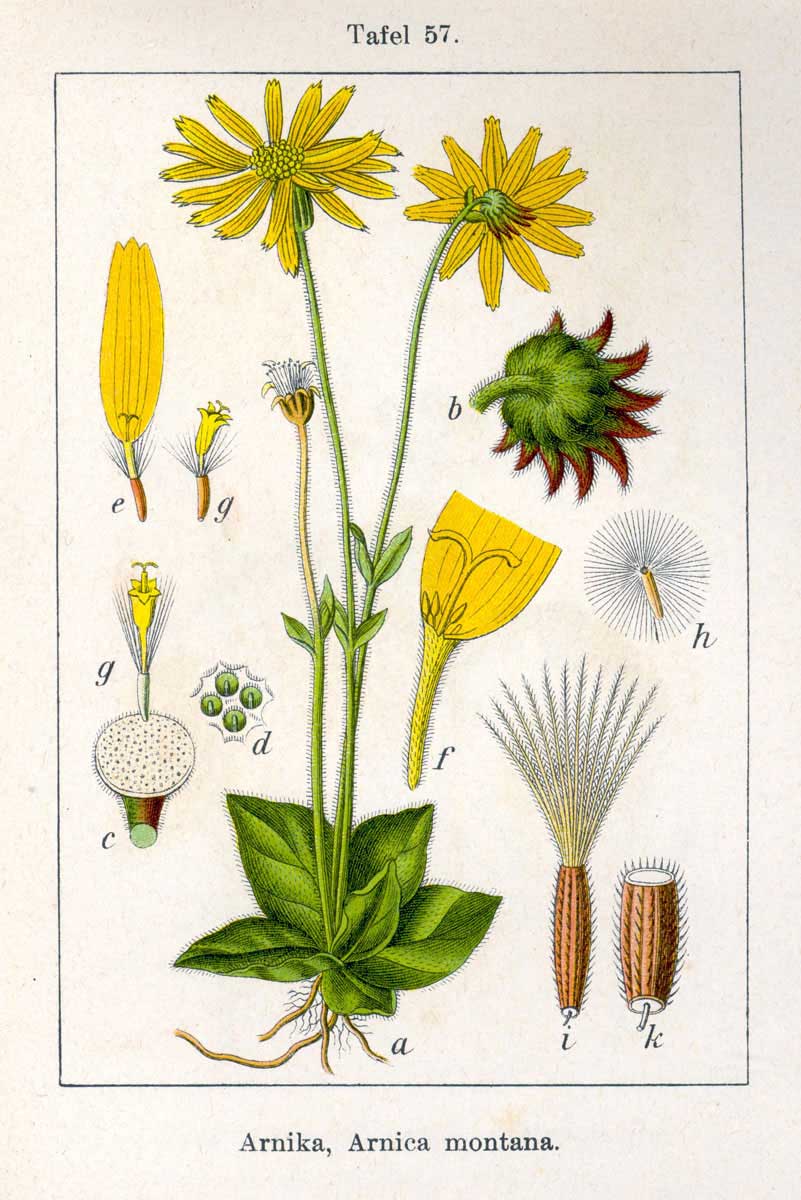 Description –
Mountain arnica is a herbaceous plant, perennial, with snow-covered, snow-covered gemstones (emicryptophytes); Its leaves arranged to form a basal rosette (browned).
It is also recognized by rhizomes with horizontal, truncated and blackish roots (fibroids).
The epigenetic part is occasionally branched up with 1-2 pairs of opposite branches. There are two types of hair around the stem: simple, long and patent hair; And short and glandular hairs. In this plant there are two types of leaves: basal and cauline ones.
The inflorescence is characterized by generally solitary heads, or at most 2-3 on opposite branches. The flowering outbreak is viscous. The casing has up to 3 series (usually one) of lanceolate and wicker scales (otherwise called involucral brattees) of length less than that of ligulated flowers; Even this is slightly viscous.
The flowers are on average 5 to 8 cm wide. The receptacle is flat or slightly concave. The headstones are composed of two parts: the zigomorphic flowers (outer part of the peacock) are yellow-golden, long (40 mm), arranged in radius and tridentated at the end; These are often disordered and folded in all directions; The amorphous tubular flowers (the inside of the capolinum) are hermaphrodites and orange or yellow-brown.
The Arnica mountain flowering takes place according to the environment where it grows between May and August.
The fruits are achens of a brown-blackish, pubescent and wrinkled color surmounted by a small yellowish feathered pappo.

Cultivation –
For the cultivation technique read the following card.

Preparation Method –
For its preparation it is necessary to start from the special harvesting times: leaves and flowers in summer; The rhizomes in September-October. During flowering, the whole plant is used.
The yellow flower, which is technically called “peppermint”, is harvested and left to dry in the shade. Flowers will not be ready until they are completely dried.
If flowers are purchased, it is necessary to check that there are no larvae in the so-called arctic fly.
This insect, known to scientists like Phytomyza arnicae, lays its eggs right in the flowers of the arctic, where larvae can grow undisturbed.
Their presence may increase the irritating effect of arena in the skin and may trigger similar reactions to allergies.
For this flower that is contaminated by Phytomizae arnicae larvae, recognizable as tiny black dots, must be discarded.
Another insect which is often referred to as “archaic fly” is Artificial Tephritis (or Trypeta arnicivora). His larvae are also accused of compromising the beneficial properties of the arena.
With arnica you can use the drug in the form of mother tincture (dilution factor 1:10) for rinsing of the oral cavity, ointments, oils and ointments.
An arnica based dye can also be prepared by macerating 10 grams of dried roots in an arnica bowl for 20 days, taking care to blot the infusion once a day.
The liquid obtained after filtration of the macerate must be stored in the dark and the need can be mixed with glycerine and water (in ratio 1: 2: 3) to obtain a solution to make wraps on skin not injured by skin sores or wounds .
Another homemade use of marble is to mix 1 tablespoon of dye with 2 tablespoons of honey to get a kind of cream or ointment for the care of foruncules.
Preparing home made arnica flower remedies is a little less straightforward. The lovers should get water, 30 grams of flowers, half a liter of pure alcohol, a camphor nut and a turpentine.
The recipe plans to let macerate flowers in alcohol for 8 to 10 days. After pouring them, add trementin and camphor, shake until the latter has dissolved and diluted with water.
The ointment obtained is recommended for a massage on areas subjected to stress by rheumatism, but given the methods of preparation there is no guarantee of its effectiveness.
Different is the case with products in which the active ingredients of the marble are quantified precisely. From the flowers, you get the dry extract titrated in a minimum 1% routine, for exterior use only, which can also be used in conjunction with other remedies offered by
No interactions with drugs or other plants are known.
No interactions between arnica and that of particular foods or nutrients are known.
In homeopathic dilation montana arnica, it provides excellent support for the treatment of neurological disorders, depression, and to reduce birth pains.