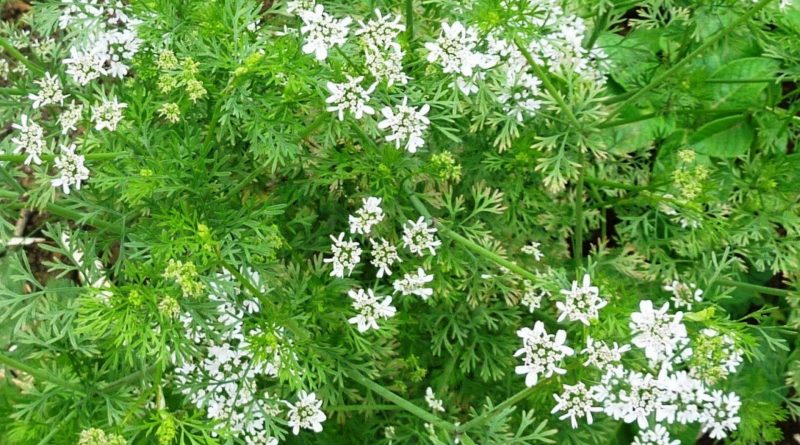 Coriander (Coriandrum sativum, L. 1753) or Chinese parsley is also known as the Spanish name of cilantro. It is an annual herbaceous plant of the Apiaceae (or Umbelliferae) family. Coriander It belongs to the same family of cumin, eggplant, fennel and of course parsley.

Systematic –
From a systematic point of view, coriander belongs to the Eukaryota Domain, to the Kingdom Plantae, to the Magnoliophyta Division, Magnoliopsida Class, Apiales Order, Apiaceae Family, and then to Genus Coriandrum and Species C. sativum.

Etymology –
The name of the genus is derived from the Greek “koríandron”, coriander, and this from “kóris”, that is, litter, making allusion to the smell not like everyone and that would look like that of the bed. Actually the likeness is really vague. However, this is why the coriander plant is also known as grass cimicin. The specific epithet from the Latin “sativus, -a, -um” (“serere”), cultivated, sown, for the common horticultural use of the species.

Geographic Distribution and Habitat –
Coriandrum sativum is an archeophytic species, commonly cultivated, then inseminated, naturalized in much of the territory. Its usual habitat is that of fields, or gardens, regardless of the substrate. The altimetric distribution ranges from 0 to 1000 m above sea level. It is an annual plant that is supposed to originate in the Middle East or perhaps North Africa from where it would spread, escaping cultivation, throughout the Mediterranean basin, Asia and even America. 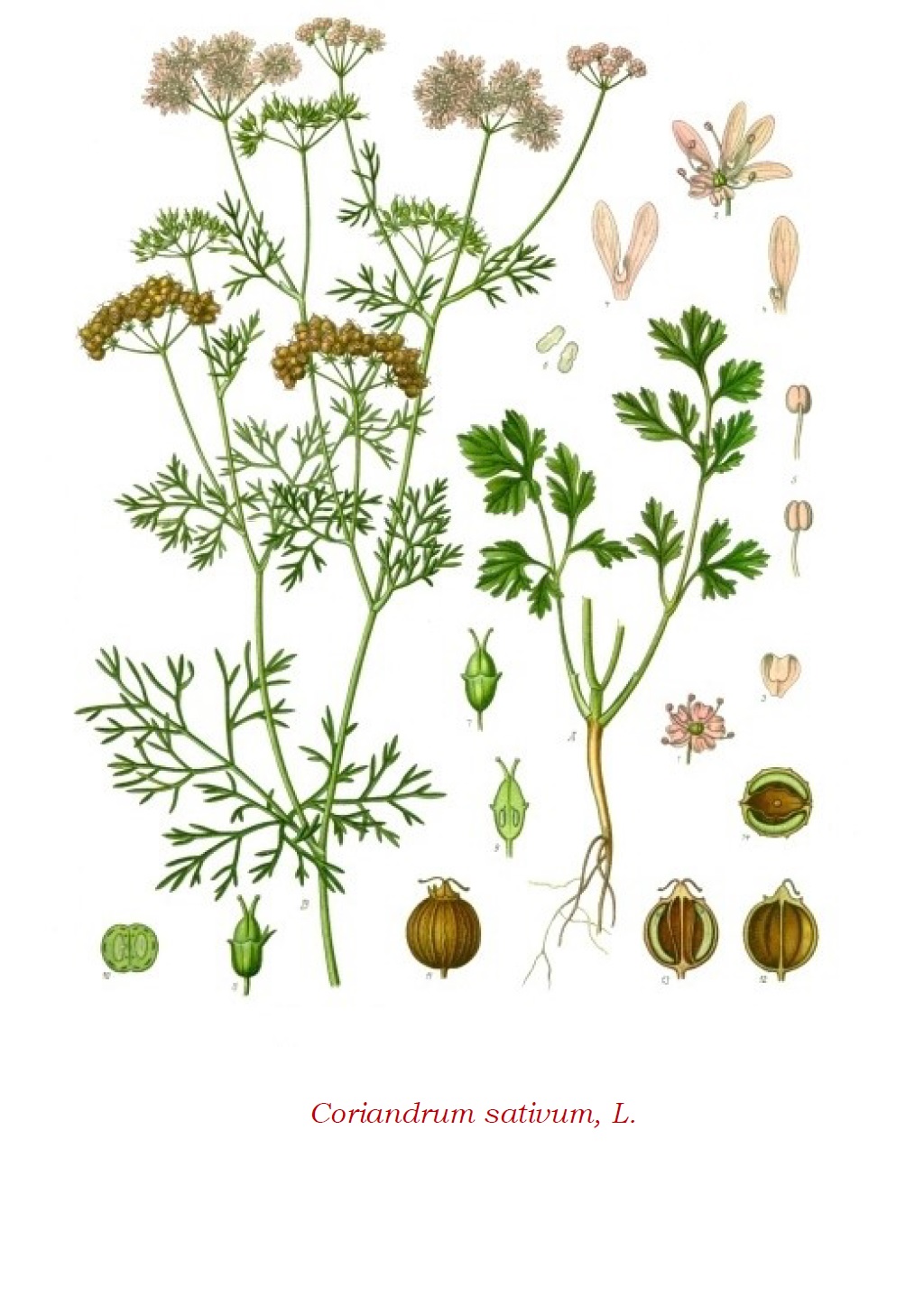 Description –
Coriander is a plant not higher than 60-70 cm, with a rooting root, erect and smooth, with very fragrant and different leaves depending on their position in the plant: the lower ones are provided with a long petiole, Almost whole or subdivided into three small toothed leaves while those placed at the highest part of the plant are two or three-leafed nuts.
The flowers appear at the beginning of summer, they are of rosewood – white and gathered in umbrella inflorescences.
The fruit is small and recalls a small sphere (commonly called seed), yellowish and rich in grooves, which is the spice we all know (commonly called seed).

Cultivation –
Coriander is a plant that has no special cultivation requirements growing up without problems a little anywhere in temperate regions.
The sowing time, however, varies according to the cultivation area: at the beginning of spring in temperate climates while in late spring it is in cold climate zones. In any case, it is best to sow in sunny areas (if planted in full field at distances of 50-60 cm while along the row the distance must be about 20 cm), using loose, well drained soil and at a depth of about 2 cm .
The plant begins to bloom from spring to late, and from July until September they begin to grind the plants to harvest the fruits.
Due to the fact that fresh plants emanate a not very pleasant smell, it is preferable to plant them not too close to their home or passage.
When sowing the coriander it is good to know that it can affect the growth of the nearby plants: for example, the fennel suffers if cultivated next to the coriander while the anise takes it vigorously.
For this reason, along with many plants, its use on the farm is carefully studied and correlated with all other crops.

Uses and Traditions –
Most of the fruits are sown between June and July. The collection of umbrellas, cut together with their stem, must occur early in the morning when the coriander is still wet with dew. They must then be dried immediately otherwise they will lose many properties over time. The umbrellas are then clustered in bunches and hung in shaded places, when they are well-dried, they strike inside a bag to separate the fruits from the peduncles that support them. The fruits are then stored in glass containers. The seeds should be kept whole because the coriander powder loses aroma very easily.
Coriander, for its aromatic properties, both leaves and seeds can be used. The leaves are mainly used in the eastern and american countries while they are not used in Europe where almost exclusively the fruits are used to flavor various types of dishes.
Coriander fruits are also used in the pharmaceutical industry to flavor medicines and the herbal industry to aromatize especially laxatives.
The fruits (popularly called seeds) of coriander are harvested in Mediterranean climates in July when they ripen and begin to assume a light brown color. Directly germinate the plants that bind in bunches and they dry out hanging upside down in dry, dry, dry places. Once dried, they strike on the cloths to drop the fruit juices which will have to be subsequently cleaned by the dust and residues of the beating. The fruits thus obtained must be stored in the dark in hermetically sealed containers.
It has an aroma so strong that if you chew the fruits, they also neutralize the aroma of garlic.
The fruits should be eaten dry as fresh have a very unpleasant smell that they lose with the drying by acquiring the characteristic aroma of coriander.
Roots are especially used in Thai cuisine to prepare a basic condiment along with garlic and pepper.
Coriander can be used as an infusion against stomach pain, it is also recommended for aerophage and migraine problems, helps digestion and has an anti-diarrheal function.
In Sri Lanka Tamil people use the fruits for preparing a decoction that, sweetened with honey, is supposed to relieve the cough.
Cinnamon is attributed to various medicinal properties thanks to its essential oil containing linalol, geraniol, acetic acid, decilic acid, borneol and pineni, caffeic acid, tannins as well as a fair amount of vitamin C. Its components make its action As antiseptic, antispasmodic, stimulant, digestive and carminative (reduces flatulence).
The juice extracted from its green parts has an inebriating effect similar to that caused by an excess of wine.
Its stimulating effect attenuates the sense of fatigue, fights insomnia and makes it a good tonic for brain activity and nervous system.
Coriander also has a fungicidal and antibacterial effect.
Although native to Mediterranean countries, fresh leaves and dried seeds are mainly used in Indian and Latin American cuisine. In Europe, today, it is back to the pursuit of those culinary cultures.
Numerous are the culinary culinary uses. It comes in the preparation of some cold meats, saves meat, fish and vegetables, but also smells beers, biscuits, confetti and pampepato; The seeds are used as spice. These are less spicy than the leaves, they are sweet with a slight lemon flavor. Ground coriander seeds are one of the ingredients of curry and garam masala. Leaves in the East are used in place of parsley. In Tenerife it is used in Mojo Verde (salsa). In South Africa, boerewors are introduced, an spicy spicy spiral sausage. Previously, in Italy, it was in the mortadella. In the town of Monte San Biagio and in some countries on the Ionian coast of Basilicata, the coriander seed is used to season the sausage mixture. According to recent studies in humans there are genetic components that suggest that coriander can be appreciated or completely unpleasant.
In Mediterranean civilization it has been used as an aromatic and medicinal plant ever since ancient times; In some Egyptian tombs it is depicted as a ritual offering. Its use by the Mycenaeans is attested in the tabs in Linear B, where it appears already defined as “ko-ri-a-ndo-no”. The Romans used it a lot and Apicio makes it the basis of a seasoning called “Coriandratum”. According to Pliny the Elder (Naturalis Historia, XX, 82), putting some coriander seeds under the cushion at sunrise could cause headaches to disappear and prevent fever.
Sugar coated seeds are named after Carnival Confetti, later plaster balls, now multicolored paper disks.
Coriander in the book One thousand and one night is remembered as an aphrodisiac plant because the juice of the green parts causes a state of puberty similar to that caused by wine.
Coriander fruits were found in the tombs of the Egyptian pharaohs with whom he had great regard.

Methods of Preparation –
As seen, the coriander, with its delicate aroma, can be added to many culinary preparations without covering the taste of the dishes.
This spice lends itself well to flavoring soups and soups, legumes, meat, fish and vegetables, especially cabbage and sauerkraut.
Whole seeds are indicated in the preparation of pickles and brine while grinded are perfect for flavoring meat, fish and sausages.
Coriander is an excellent ingredient for spice blends for its delicate flavor and we find it, as mentioned, among the ingredients of curry and garam masala, the blend of Indian spices.
Matches with other spices to try are the one with thyme and pepper to give an exotic touch to the boiled rice and the one with the nutmeg to flavor the mashed potatoes.
In international cuisine, coriander is much appreciated, less in Italian, where it is used in sausage preparations (often mistaken for pepper) and as an aroma for liquor and digestive.
In Morocco it is used in marinated and stuffed meat while in Egypt it is matched with beans.
In the East, the leaves are mostly used, which smells very strong and does not look good to everyone, to flavor salads and soups.
Coriander leaves are also present in many Mexican dishes.
In Central Europe, the coriander seeds season the game, the pickles and the brine, the vegetables and the mushrooms.
In the Balkans is a well-priced pier spice to flavor bread, fruit and some sweets.
Coriander is used in the preparation of liquors and digestives, for example in Ratafià, Gin and Chartreuse.
In European cuisine, however, it is not a widely used spice, while it is fundamental (such as our parsley) in Middle Eastern cuisine, especially Arab and Indian, including in the composition of curry (Indian spice blend) and chutney Vegetable typical of Indian cuisine, spicy, dense, based on fruits, spices and vegetables). Even in Mexico and in Southern American tradition, coriander is very used.
With coriander you can prepare a digestive, effective, and aromatic infusion: just put 2 grams of coriander seeds in 100 ml of boiling water for a few minutes. A few spoons after meals will be enough to help digestion and elimination of intestinal gas.
It should be emphasized that the coriander essence should be used with very moderation because high doses can cause nerve, gastrointestinal and kidney problems. It is advisable to take it under strict medical supervision.