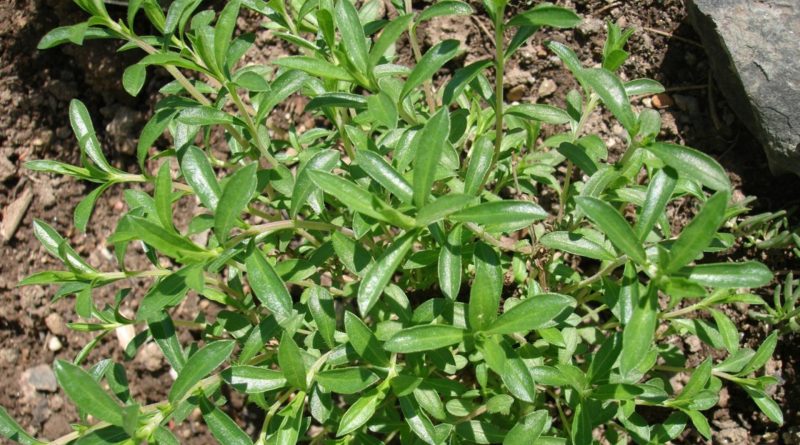 The annual sacrament (Satureja hortensis L., 1753) is a perennial plant of the Lamiaceae family. It is a small annual herb, high about 30 (exceptionally up to 40 cm), which forms a pretty bush.

Etymology –
The etymology of the genre (Satureja) is somewhat uncertain. Linneo derives its name from an ancient Roman word whose “saturated” Latin root means “satiated” with reference to the supposed digestive properties of such plant juices. Another etymology would make the name “salsa”, “intingolo” instead of the flavoring properties of this plant in the kitchen. According to others it would come from a Latin name for the “herb salve” known to the ancients and recommended by Virgil as an excellent tree to plant near the hives. Still others derive from “satureia, satureiorumin”, a word used by Pliny (Como, 23 – Stabiae, August 25, 79), a writer, admiral and Roman naturalist, for a culinary herb (probably derived from “sattur” Arabic). For others The name derives from the Latin term Satyrus meaning satire, referring to its aphrodisiac properties attributed to it.
The specific name (hortensis) is clearly derived from the fact that it is a plant that can be grown in gardens and orchards.
The scientific name of the species was defined by Linneo (1707 – 1778), in its published Plantarum Species.

Geographic Distribution and Habitat –
Satureja hortensis boasts an area of ​​Asian Asian origin that has become Euri-Mediterranea.
In Italy it is a species with variable diffusion and is located in the North and Center and in Sicily in subspace forms. In the Alps it has a discontinuous presence. Outside Italy, always in the Alps, this species is found in France (Alpes-de-Haute-Provence, Hautes-Alpes, Alpes-Maritimes, Drôme, Isère and Haute-Savoie), Austria (Länder of North Tyrol, Eastern Tyrol, Salzburg and Carinthia). The other European reliefs linked to the Alps are located in the Central Massif and in the Pyrenees. In the rest of Europe it is located on the Mediterranean side including Anatolia.
Satureja hortensis lives and grows above all in the arid dry, in the walls, in sandy or gravelly and dry places; Also the Mediterranean xerofile breeds. The preferred substrate is calcareous but also siliceous with neutral pH, high nutritional values ​​of the soil that must be moderately humid.
Its altitude distribution is up to 1300 m s.l.m .; Thus attending the following vegetation plans: hilly and mountainous (in addition to the plan – sea level). 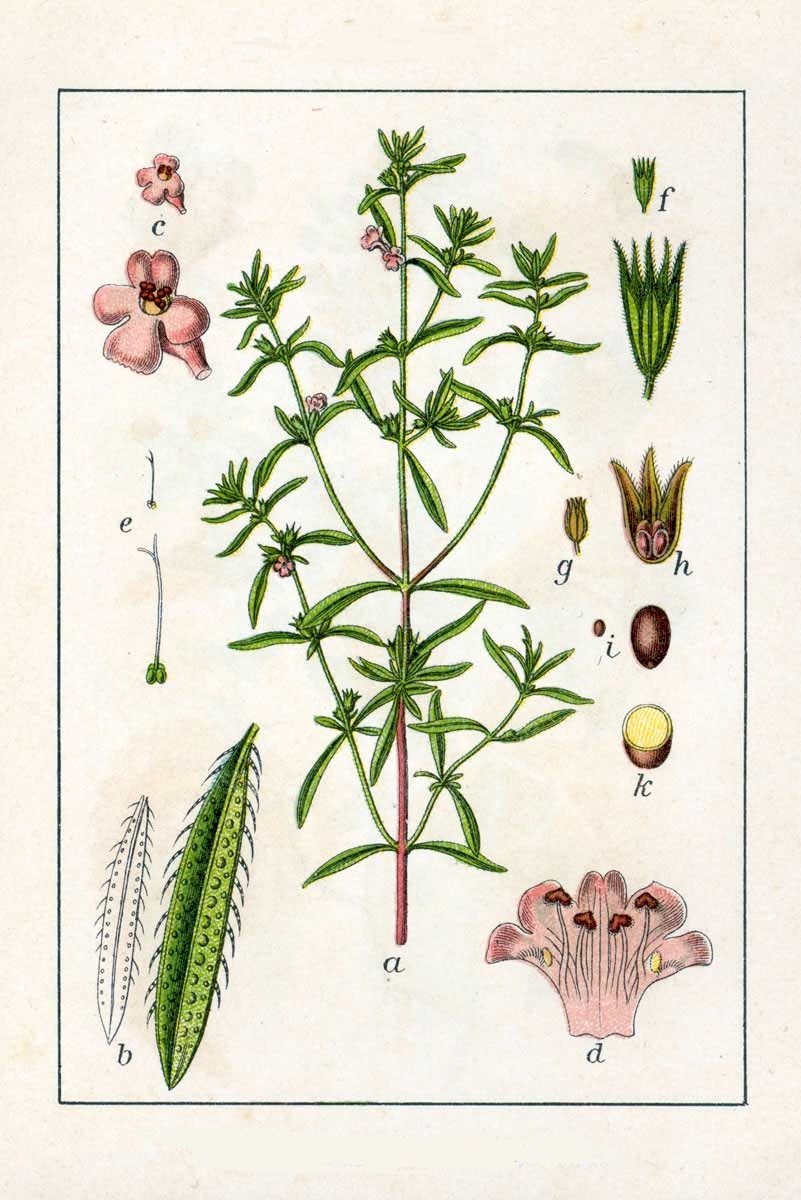 Description –
The anniversary salon reaches a height of 10 to 30 cm. The biological form is herbaceous, that is, in general, herbaceous plants that differ from other biological forms because, being annually, they pass the adventurous season in the form of seed and are provided with flowered, often leafless leaves. The plants come with a pleasant aromatic scent. The leaves, opposite, are lanceolate. The flowers appear from June to September, they are white or rosy and gathered in axillary verticillas.

Cultivation –
Cultivating this plant is not particularly complicated provided it has a good substrate and ideal climate. Sanctuary loves sunshine and high temperatures, from the Mediterranean climate. Its ornamental value is not particularly interesting, though the plant has a good filling effect due to the shape of the green bushwood.
If we planted the shrine and cultivate it for ornamental and aromatic purposes, we will have a very prosperous growth of this plant and will have to contain its development with a containable pruning. Pruning will help to prevent the plants from developing too much in volume and will also help the Santoreggia to spin, finding new vigor and prolonging significantly the duration.
The annual species is completely dissected with the arrival of the first cold, but the mountainous Santoreggia should be protected from frost in the regions where it is more intense and persistent. Where the winter temperatures are too low, Santoreggia can dry partially or totally during the cold season, depending on the intensity of the frost.
It does not require large amounts of water, preferring drought to excess watering. Proper watering improves growth, however.

Uses and Traditions –
According to popular medicine this plant has the following medicated properties:
Anti-rheumatic (attenuates pain due to joint inflammation);
Antiseptic (property of preventing or slowing the development of microbes);
Carminative (favors the release of intestinal gases);
Digestive: Helps digestion of foods;
Espouse (favors the expulsion of bronchial secretions).
Satureja hortensis therefore has Toniche properties, disinfectants, carminative; The infusion is slightly euphoric; Stimulates physical and funeral functions.
Essential oil is used in perfumery.
Always the aerial part of the plant is used for outdoor use in Infused for sore throat and mucous problems. With facial fumigation and fat skins.
In herbalist and naturopathy, mother dyeing is used in the treatment of meteorism, impotence, angina, cough and bronchitis. This plant is widely used for its aroma, gastronomy, liquorice and perfumery.
Edible parts, as mentioned, are the leaves with which you can make an infusion or they can be used as a seasoning.
Ultimately the sacrament is endowed with many properties that we can benefit from: diuretic, antispasmodic, antiseptic of the intestine. It is mostly used in cases of dyspepsia, diarrhea and swelling caused by intestinal gas. A curiosity wants to be attributed to the sacrament of a stimulating ability against impotence and frigidity.
The Satureja hortensis or montanar grove is a special variety of saintly, mainly wild and therefore defined as such, it differs from the maid because it is more robust and resistant, as well as a different variety of the pigments of its flowers.
For harvesting and preserving, the leaves must be picked, fresh or dried, before flowering.
The leaves, strongly aromatic, are used to give flavor to meat and fish dishes.
For its alleged aphrodisiac properties in the Middle Ages it was forbidden to cultivate it in the cloisters of the monasteries. Sanctuary aromatizes and makes meats and legumes digestible and enters the composition of vermouth, traditional Piedmontese herbal liqueur.
Its active ingredients are therefore essential oil (containing over 30% carvacrol), tannic substances and mineral oils.
The Romans used it in great abundance to flavor the foods.
Louis XIV (King Sun), greatly appreciated this plant for its aphrodisiac virtues.
It is recalled that a directive of the Ministry of Health (December 2010) allows to include the plant substances and extracts in the dietary supplements of this plant.

Methods of Preparation –
Similar to thyme and marjoram for consistency and aroma is a herb that we can use widely in our second dishes because its aroma is particularly suited to legumes, meat and mushrooms. It can also be used for preserved vegetables or to accompany fresh cheeses. Here we will present a totally vegetarian recipe on how to use the sacrament.
A vegetarian recipe is the one with damp beans with cherries.
The ingredients are:
200 grams of fresh and small beans;
2 spring onions;
4 tablespoons of cold squeezed extra virgin olive oil;
1 tablespoon fresh summer salty;
Salt and pepper q. b.
Prepare the extra-virgin olive oil, the freshly sliced ​​spring onions, add the fresh fondue and let it brown for about two minutes, on a slow fire, with a spoon of wood. Place the boiling and boiling water to cover the beans, let them boil on high for about 5 to 10 minutes, when the beans are held, and its almost dried liquid, the dish is ready, so season with salt and pepper , Combine the extra virgin olive oil.
Another preparation and use is that of the sacrifice infusion.
Place 30 g of flowered summits of dried saliva and crumble 1 liter of boiling water, allowing it to rest for 20 minutes. Sweeten with sugar and carefully filtered.
Rinse and gargle with sore throat. The infusion is also good for ulcerated mouth mucous membranes.
Sanctuary is also used to flavor liquor.