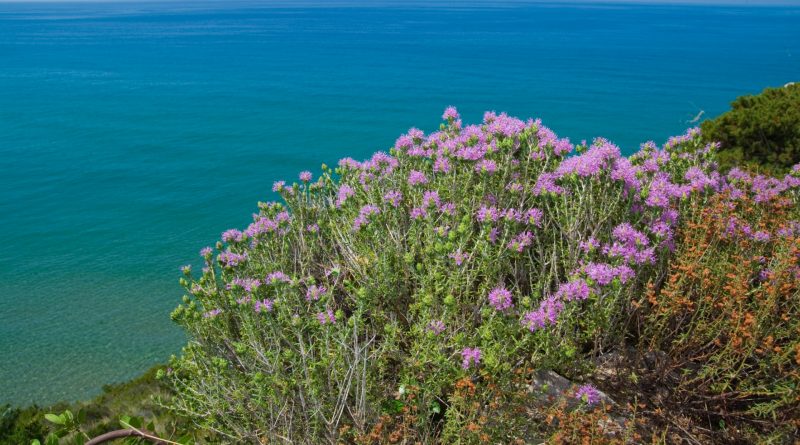 Etymology –
The name derives from the greek and means “strength,” “courage” in reference to its properties.
The term instead happened from caput, capitis head of the head: with inflorescence to peep, peep, or large or odd.
The term Thymus could, however, derive from the Egyptian Tham which is a similar species which was used to carry out embalming.

Geographic Distribution and Habitat –
This small shrub is widespread in drier areas and often on sunny hillsides and arid scrubland of the Mediterranean area, especially the eastern and exposed to salt. It is often found on chalky or limestone soils where it can be extended and plant communities in which it is usually the dominant species. It is often associated with xerophilous plants and small shrubs.
In Italy it is present mainly in the South and the Islands; (On the coasts of Salento, in Apulia and Abruzzo, Molise, Campania, Basilicata, Calabria, Sicily and Sardinia. In Sicily is still very widespread in the provinces of Agrigento and Ragusa, where it grows spontaneously in many areas. The Iblei it are ideal habitats. Unfortunately this species in the wild is becoming rare status as local territories, after centuries of deforestation, intensive agriculture, grazing and fires, has severely depleted the species that made up the original flora. Fortunately it is increasingly common to its cultivation in the southern nurseries. 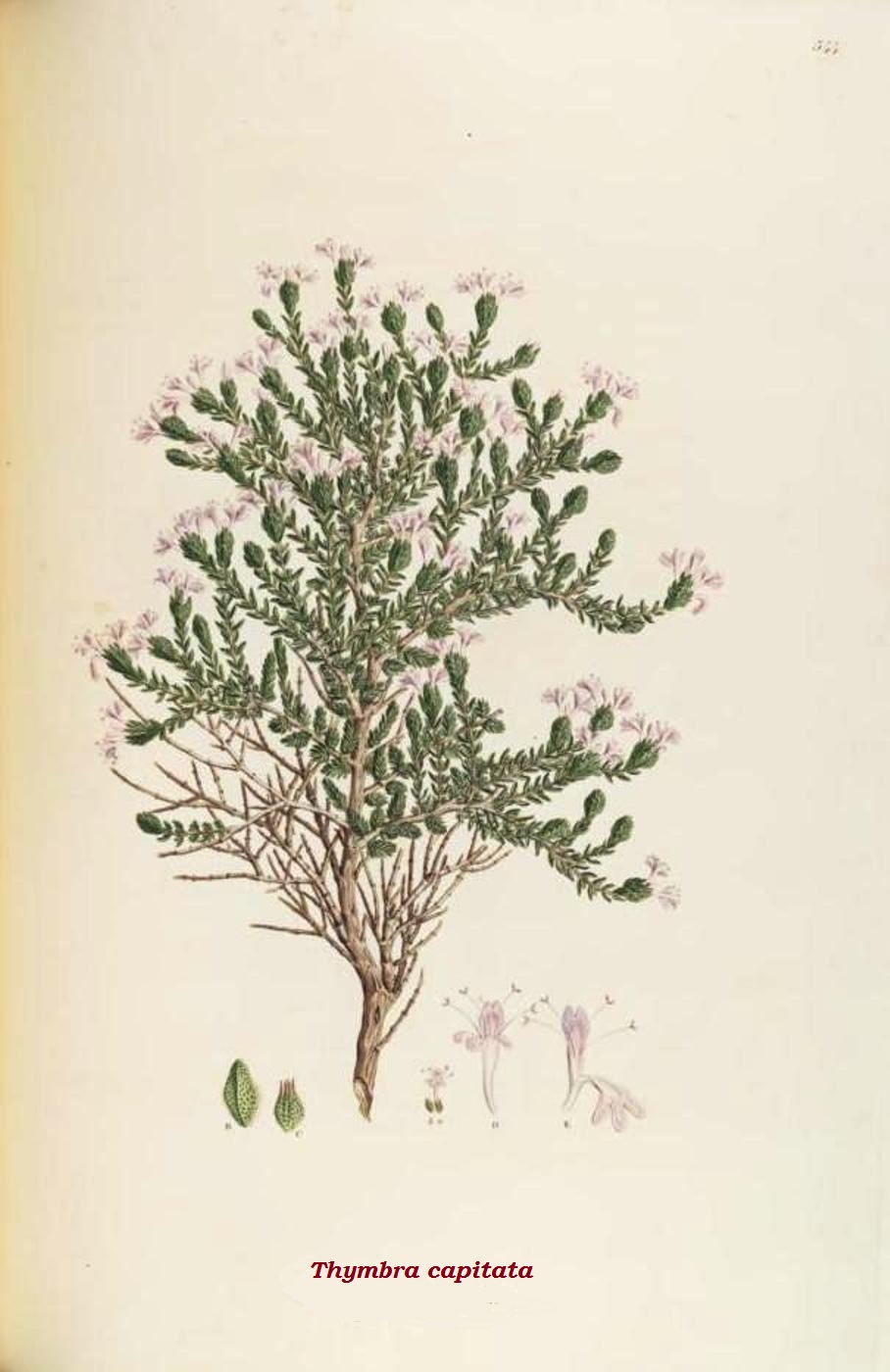 Description –
The Thymbra plant has woody branches with whitish bark. The leaves are very dense, with pointy glands, well-groomed and somewhat revoluted on the margins. The inflorescences are ovoid with a glass around the 5 mm, pink-purple corolla of about 10 mm. The top of the chalice is typically flat. Thyme is a 30-40 cm high plant. It flowers in March-April until July-August.

Cultivation –
Thyme cultivation is very similar to that of oregano or rosemary.
Though it is a rustic plant and it suits on dry terrain, it does not disfigure fertilizer at all. However, this practice should be done with great care where you want to extract aromatic substances and essential oils so as not to diminish the fragrance. Fertilization should always be organic.
There is no need for irrigation; You have to water it normally without exaggerating (for the same aspects as the fragrance of its substances.
Pruning must be done by removing the dry or damaged parts. While for harvesting, cut a few centimeters over the base to allow for the next rejection.
From the point of view of plant protection it can be subjected to aphids or rotten radicals if grown in unsuitable substrates.
It fits well enough both at high and low temperatures. If grown in a vase and need to be rebuilt, it works in the spring, using only a jar slightly larger than the previous one.
For the substrate you always have to think that it lives well on limestone, limestone / chalky, arid and shallow ground, the important thing is that they are well permeable and lean.
Propagation takes place by radical pollen.

Uses and Traditions –
Thymbra capitata has remarkable and interesting medicines and food properties. The leaves contain an essential oil with antiseptic, disinfectant and deodorant properties. Essential oil can not be used in aromatherapy because it is irritating to the mucous membranes. Leaves are sometimes used to prepare a kind of tea.
Very appreciated is the honey of thyme, already known in antiquity and cited by Greek and Latin poets.
Applied to aromatize roasts, but also in herbal medicine such as carminative, diuretic, deodorant, vermifuge, revulsion, tonic, etc.
The species is known for its nutritional use and aromatic plant, but is also used in cosmetics, perfumery and phytotherapy, extracting from the plant an essential oil, also known as “Spanish oyster oil”, which is Used as antiseptic. It is also attributed to diuretic properties, to combat worms and to promote menstruation.
It is used as a disinfectant, against spasms and bruises, and above all, as in other species of thyme, to combat cough, cataract and respiratory ailments in general. Dye is also used to strengthen the limbs, while thymus baths to relax and to fight insomnia. Someone uses thyme herbs to fight alcoholism. Thyme has been known since ancient times and to various species without distinction. In the kitchen it is used like other thyme species, to aromatize many preparations and dishes more or less traditional meat or fish. It is used to flavor also seasoned olives and other preserved foods, such as sardines or other fish, and buns, sometimes replacing oregano. In the Mediterranean area, it is used in the same way in other countries, sometimes using as an aphrodisiac (in Tunisia) or expanding the already wide range of possible uses. Sometimes, for example, it is used to directly spice up the grilled barbecues or extract a kind of “honey”.
It is not uncommon for the aromatic use of the air-dried parts (Turkey and other places) while the essential oil is flavored with baked goods and other foods.
Several traditions and popular stories are also associated with Timo.
The Romans first introduced their culinary use to perfume wines and cheeses.
At one time, the girls laid a sprig of thyme under the pillow to find out who would marry.
In the flower language the thyme is a symbol of temperance. Already in ancient Greece it was known for its many powers and for this reason it was associated with Zeus, the father of gods. According to a legend, the thymus would magically be born of the tears of the disconsolate Arianna abandoned by Teseo after defeating the Minotaur.
Some folk tales associate it with the Madonna who would wear a crown of thyme flowers on the wedding day, thus conferring power to this plush against all evils.

Methods of Preparation –
Among the various preparations remember the thyme herb (flowers and leaves). It is a diuretic that promotes menstruation and relieves abdominal cramps (also due to the cycle) and stomach aches, but not only. Drinking one or two times a day a warm thyme tea helps to counteract respiratory infections, coughs and catarrh.
To prepare this delicious herbal tea, take a boil of water (a cup, add a tablespoon of dried leaves and dried thyme flowers and let it bake for half a minute, then turn off the fire and let it infuse for 10 minutes. Your herbal tea to fully enjoy the beneficial effects of thyme. To make the flavor more pleasant, it is advisable to tender with honey.
Another interesting preparation is that of the “four thieves” called vinegar: a powerful mix of herbs. The vinegar of the four thieves can be prepared in many ways and thyme is a key ingredient. According to a legend, it was used by four thieves to defend themselves against the plague that plagued the city of Toulouse (Milan in some versions). It is used by spraying the body after the bath. It has antiseptic, anti-inflammatory, antiviral and antimycotic properties.
For its preparation, one liter of white wine must be put in a bowl that leaves a tablespoon of thyme leaves, a spoon of sage leaves, a spoon of rosemary leaves and a lavender. After a week filter and store in glass flasks.
Another application and other preparation is dyeing. This is used to strengthen musculature especially before and after sports and physical activity.
Thyme dyeing is also used to reinforce the arts of the children by rubbing it directly to the affected parties.
To make the dye just fill a bottle with thyme flowers, cover with alcohol (that for liqueurs) and let it rest in the sun for 15 days.
Let’s go now to the essential oil. From kitchen to home cleaning, thymus essential oil has antiseptic, antibiotic and soothing properties. Put 3 drops in half a liter of oil to give a more touch to salads, boiled vegetables (a delicious potato!), Roasts and soups.
Add 5 drops to a glass of oil to enhance the relaxing power of massages, relieve nervousness and insomnia (if due to a stressful state).
To get an economical and natural disinfectant for floors pour some drops of essential oil into a bucket of hot water with denatured alcohol. Simple and effective.
For its preparation fill a bottle of thyme flowers and cover them with olive oil for 2-3 cm. Let it rest in the sun for two weeks and store in glass flasks in a sheltered place.